ArtSEA: SIFF is back in Seattle movie theaters (and online)

Plus, tips for jazz appreciation month, from Count Basie to Kenny G. 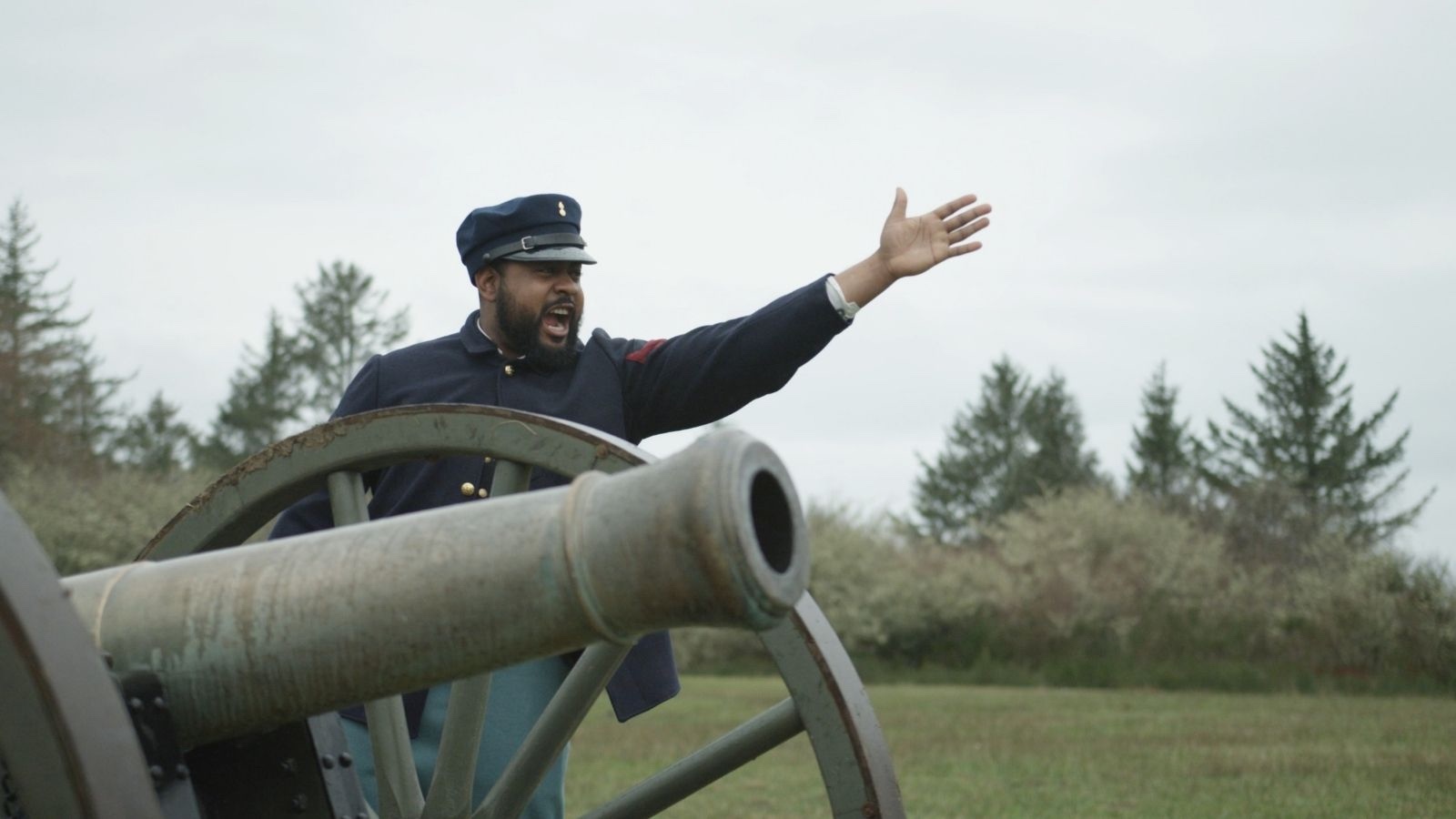 Seattle’s film community is having a blockbuster spring — thanks in large part to two major new releases: the increase in funding for Washington’s Motion Picture Competitiveness Program, from $3.5 million to $15 million (passed by the Legislature on March 10, signed by Gov. Jay Inslee on March 31); and the debut of a new 117,000-square-foot filmmaking facility, Harbor Island Studios.

As Crosscut’s Margo Vansynghel reported last month, these developments will help attract out-of-state film and television productions (and their dollars) to the region, provide convenient and professional options for local filmmakers and keep talented local crews from having to find work beyond Washington’s borders.

All of which means that in the coming years, the slate of Northwest movies featured at the Seattle International Film Festival — which kicks off tonight at the Paramount Theatre and screens online and in theaters through April 24 — could become a lot more crowded.

SIFF’s customary “Northwest Connections” program includes movies shot in the Northwest, made by Northwest filmmakers or featuring Northwest subject matter. And I’ll be honest: it has felt a bit skimpy in the past. This year’s slate is still fairly small — six features plus a shorts package — but the offerings are strong, including Know Your Place, a world premiere feature by Iranian American filmmaker Zia Mohajerjasbi, whom Margo interviewed this week.

Writer and director Mohajerjasbi grew up in the Seattle area and moved to Los Angeles six years ago. Lately, he said, he’s been startled on his return trips by how much his beloved hometown has changed. His fictional, lyrical film — set and shot in Seattle, much of it in the Central District — is about Ethiopian and Eritrean teenagers navigating changes wrought by gentrification, as well as their own coming of age. The themes of place, history and family — and how these form identity — resonate across many of the Northwest Connections films. 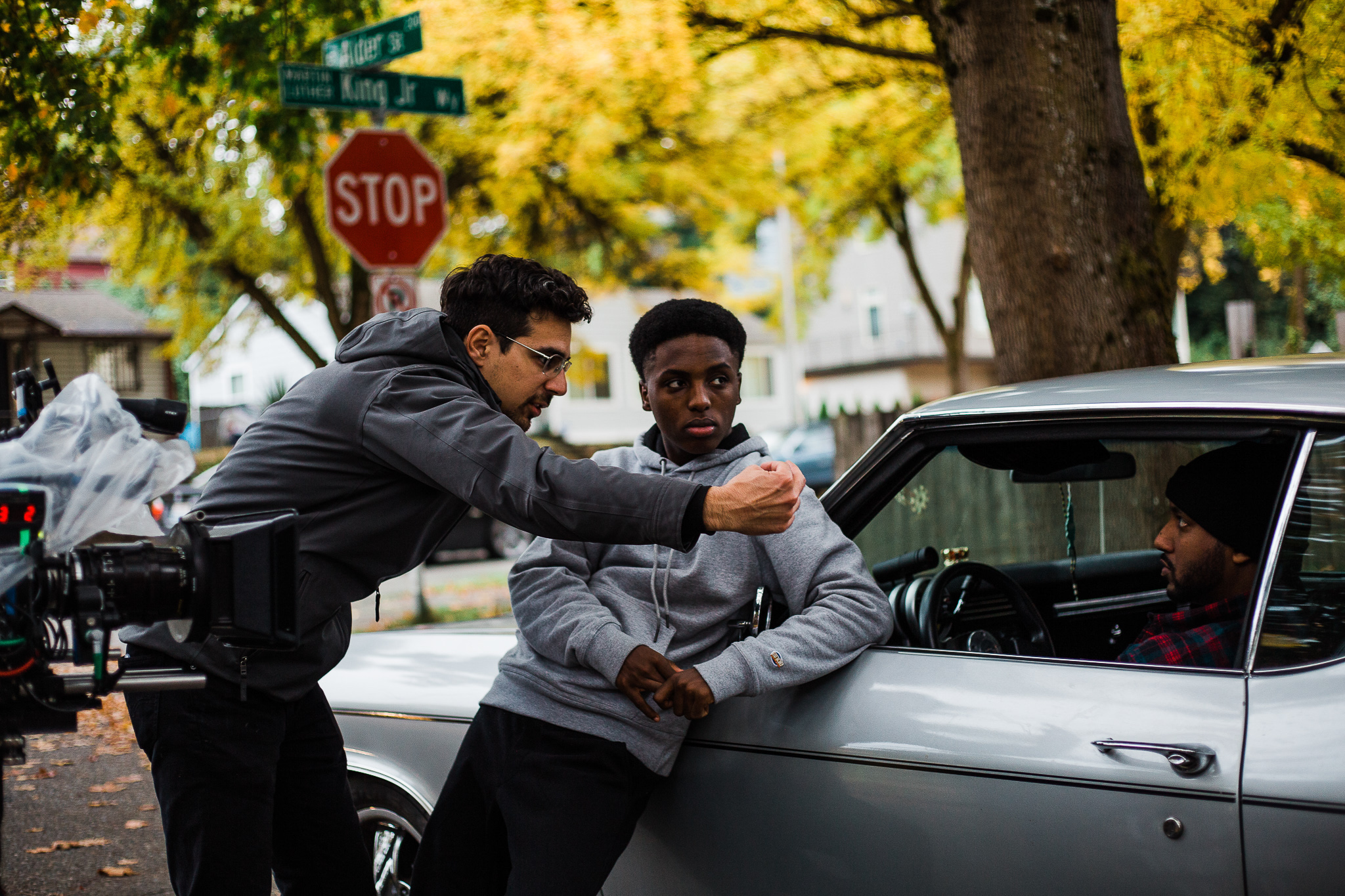 Director Zia Mohajerjasbi, left, on the set for his first feature film, ‘Know Your Place,’ with Seattle actor Joseph Smith and, in the car, actor Selemun Welderfael. (David Rzegocki)

Director Zia Mohajerjasbi, left, on the set for his first feature film, ‘Know Your Place,’ with Seattle actor Joseph Smith and, in the car, actor Selemun Welderfael. (David Rzegocki)

History plays a starring role in two documentaries on the NW roster. Buffalo Soldiers: Fighting on Two Fronts, by Northwest filmmaker Dru Holley, employs reenactments, regional scholars and Seattle members of the Buffalo Soldiers to illuminate the stories of the African American regiments that fought for the U.S. military in the late 1800s and early 1900s. The battles these men waged were complicated on many levels, including participation in the Western expansion that displaced Native Americans, and fighting for a country that allowed them few liberties.

And for a lingering historical mystery: The doc I Am D.B. Cooper, by T.J. Regan, tracks the strange case of Rodney Bonnefield, an elderly ex-con who claims to be the infamous escape artist. If Bonnefield’s alleged identity is just a scam, why do so many of the details line up?

Other local films feature hijackings of a very different sort. In Sweetheart Deal, a cinema verité documentary in which directors Elisa Levine and Gabriel Miller follow four Aurora Avenue sex workers over seven years, we see how the women are commandeered by drug addiction, troubled relationships and the manipulative “Mayor of Aurora.” In Midday Black Midnight Blue, a fictional feature filmed on Whidbey Island, a man’s decades-long grief over the loss of a loved one causes him to spiral out of reality. 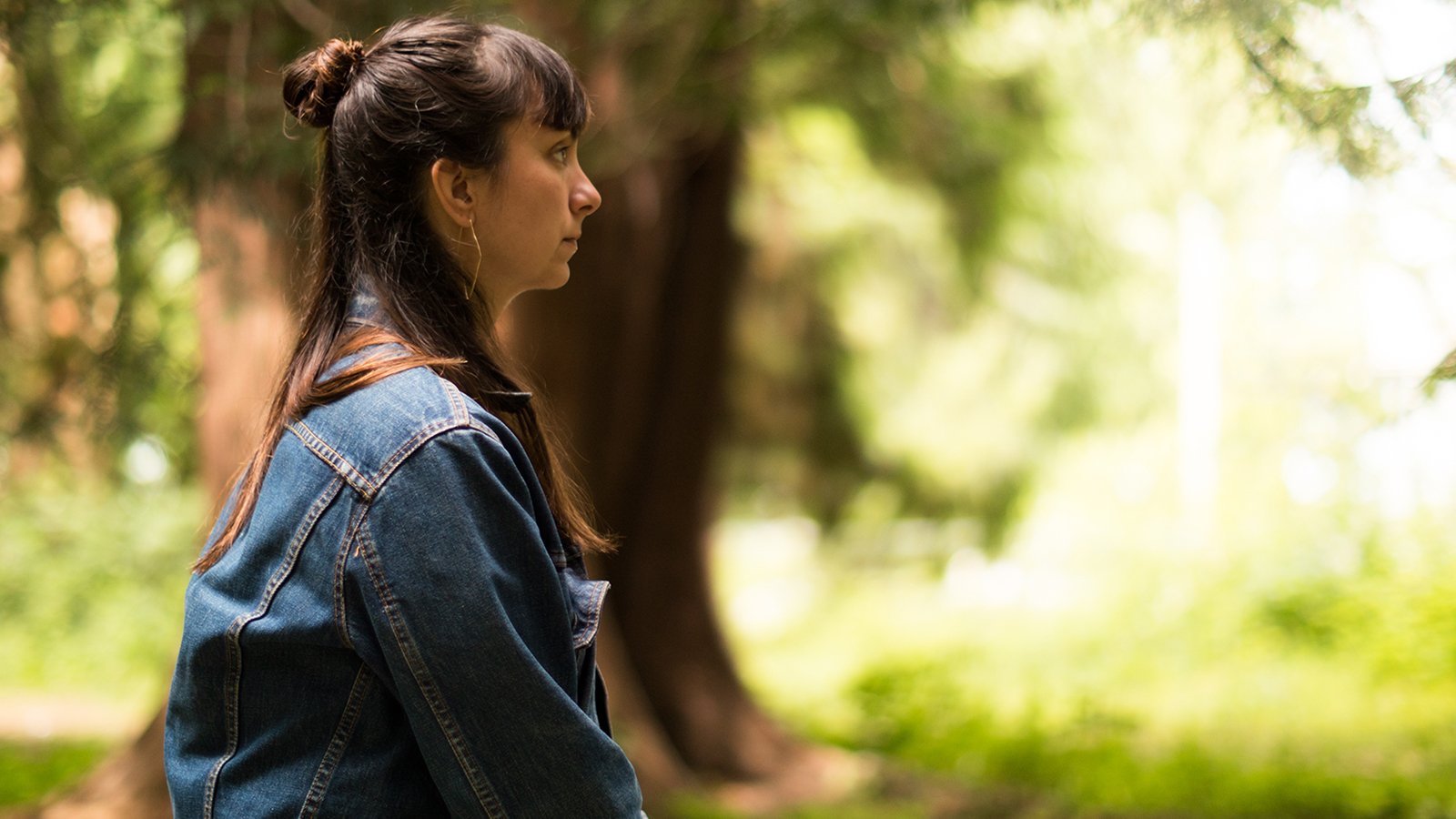 The documentary ‘Daughter of a Lost Bird’ traces an adoptee’s search for her birth mother and a connection to her Lummi Nation heritage. (Courtesy of SIFF)

The documentary ‘Daughter of a Lost Bird’ traces an adoptee’s search for her birth mother and a connection to her Lummi Nation heritage. (Courtesy of SIFF)

And there’s also a new movie from acclaimed Seattle filmmaker Megan Griffiths — no stranger to SIFF, who won the 2015 Mayor’s Award for Outstanding Achievement in Film and premiered several films at the fest over the last decade. Her new feature, I’ll Show You Mine, is a deeply intimate conversation between two characters (played by Poorna Jagannathan and Casey Thomas Brown), both of whom are carrying heavy psychological burdens based in long-buried secrets.

Finally, presented as part of SIFF’s “cINeDIGENOUS” program, is Daughter of a Lost Bird. This moving documentary, by Brooke Pepion Swaney (of Blackfeet and Bitterroot Salish heritage), tells the story of Kendra Mylnechuk Potter, a woman searching for her birth mother and for a deeper connection to her Lummi heritage. After meeting her mother — who was also adopted by a white family, but who has no record of her birth parents — Potter learns more about the painful history of deliberate Native erasure through white adoption, and experiences the discomfort of claiming Native identity after growing up in a white world. 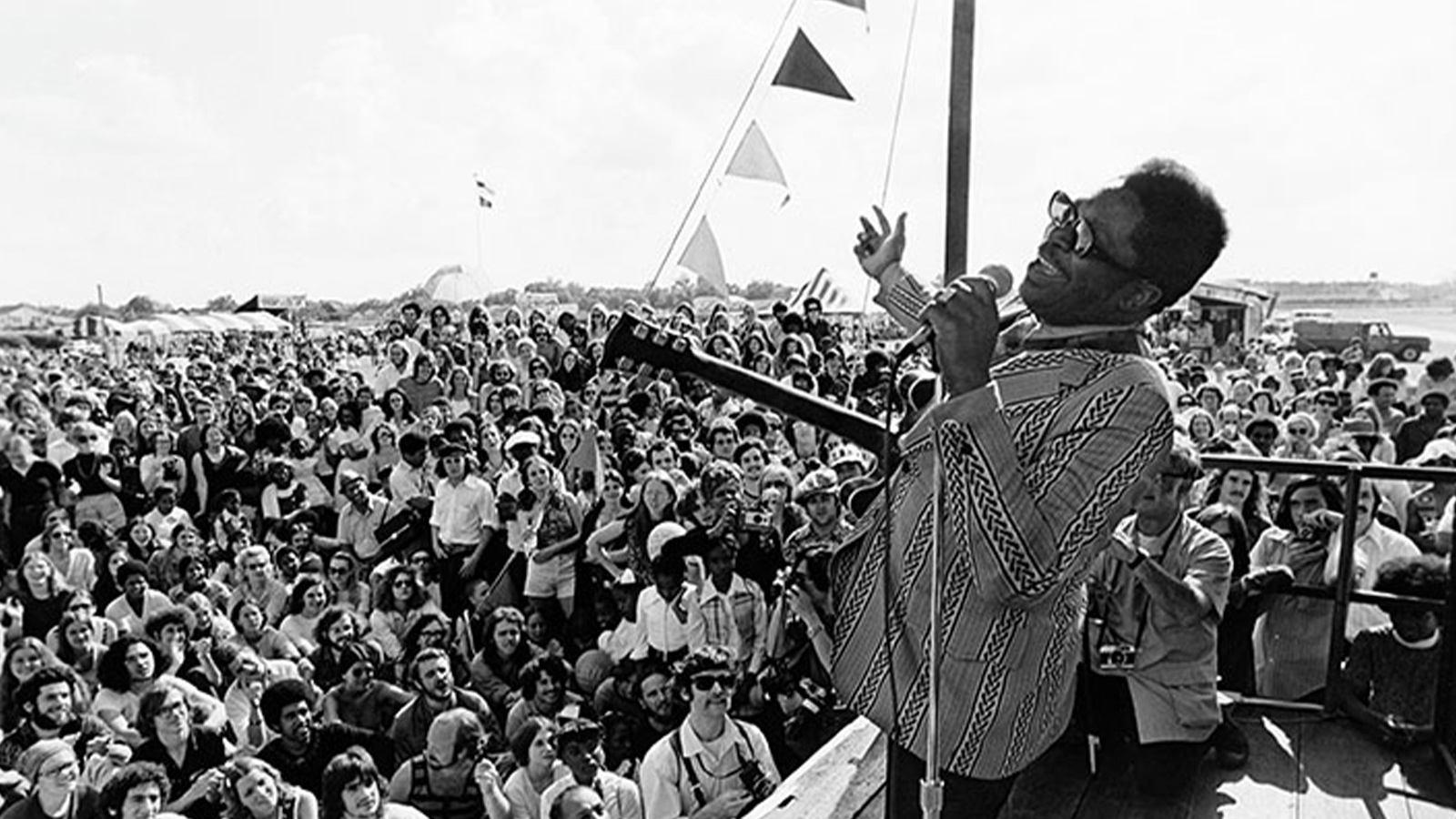 The new documentary ‘JazzFest: A New Orleans Story’ paints an irresistible, pulse-pounding picture of the beloved music festival via interviews and archival footage from the past 50 years. Shown here, B.B. King in 1972. (Courtesy of SIFF)

The new documentary ‘JazzFest: A New Orleans Story’ paints an irresistible, pulse-pounding picture of the beloved music festival via interviews and archival footage from the past 50 years. Shown here, B.B. King in 1972. (Courtesy of SIFF)

April is National Jazz Appreciation Month, an appellation that strikes me funny. As I wrote a couple weeks ago, April is also National Poetry Month — not poetry appreciation month. There’s no prompt for appreciation in National Salad Month (May, apparently) or National Golf Month (August, FYI). Perhaps the original jazz-month boosters were sensitive to the fact that, for some reason, a lot of people have a knee-jerk reaction against the entire music genre — despite its wildly diverse forms! So they are simply asking people if not to listen to jazz, at least to appreciate that it exists.

I am both an appreciator and a regular listener, and I have several options for those who want to celebrate the month with live music.

The legendary Count Basie Orchestra — now running 85 years strong — is playing Benaroya Hall (April 15 at 8 p.m., April 16 at 2 and 8 p.m.). If you ain’t got that swing while listening to this big band extraordinaire you may need a defibrillator.

For jazz heads with an edge: Acclaimed experimental saxophonist and composer Darius Jones joins the Seattle Modern Orchestra at Town Hall (April 15 at 8 p.m.) for a special concert featuring a work specifically penned for the New York-based Jones by Seattle-based Turkish composer Yiğit Kolat, as well as the world premiere of “War,” a timely minimalist piece written by Jones.

And popular Seattle son Kenny G (read my thoughts on the recent HBO documentary about him) will play his unmistakable smooth jazz stylings at Dimitriou’s Jazz Alley (April 21-24).

Still sound like too much “jazz appreciation” for you? Then I’ll point you back to SIFF, for the documentary Jazz Fest: A New Orleans Story, which Variety calls “infectiously exuberant.” This horn-blasting, butt-shaking survey of the past 50 years of the beloved music festival might finally convince doubters that jazz contains multitudes.