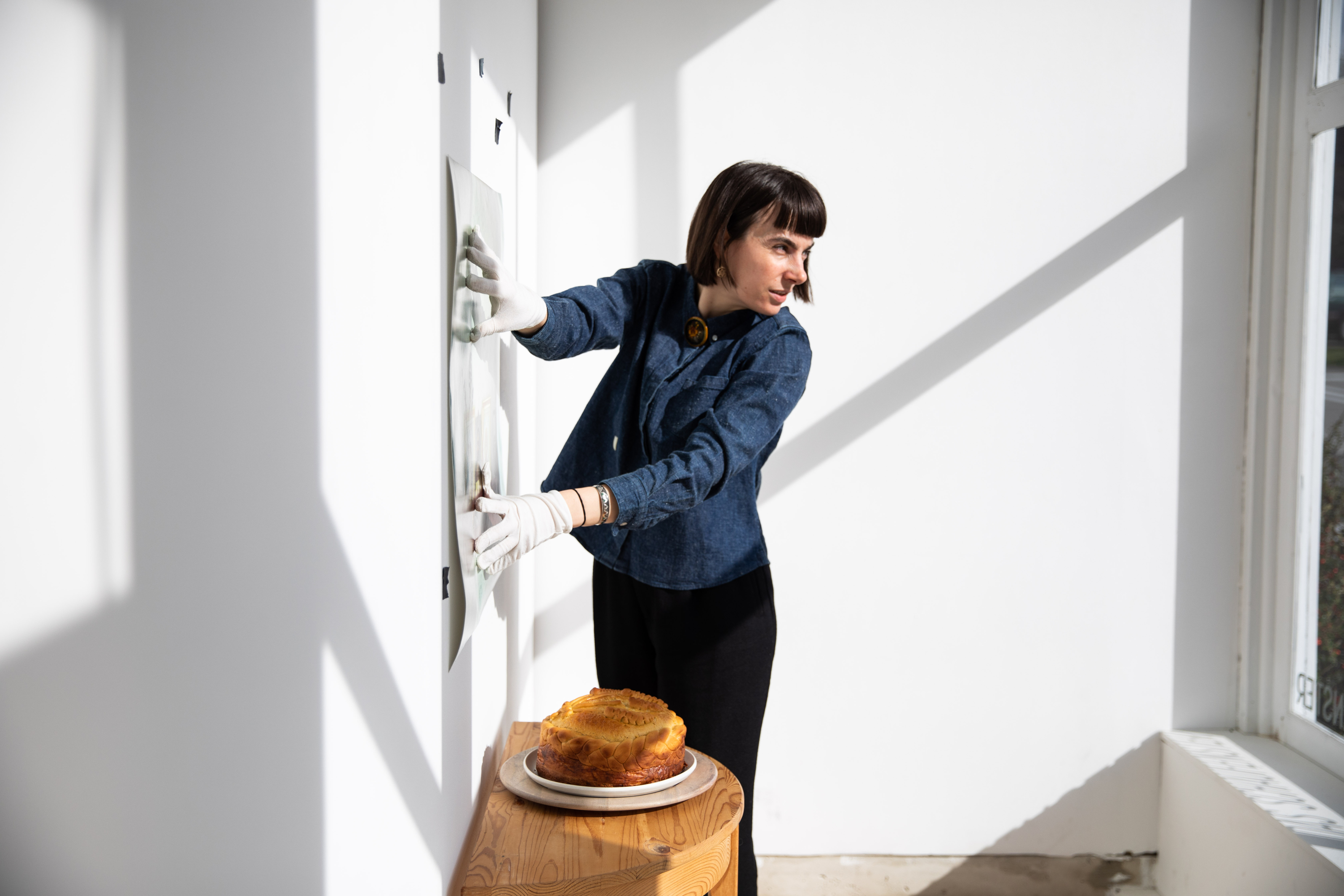 Ukrainian artist Darya Husak sets up her installation “The Spring Is So Imminent,” which will show a symbolic home prayer corner in the small window gallery at Das Schaufenster in Ballard, March 31, 2022. (Amanda Snyder/Crosscut)

March 14, 2022. The nineteenth day of Russia’s invasion of Ukraine is entering its twilight hours. Ukrainians in besieged cities prepare for the night and brace for potentially more shelling, explosions and air attacks. Halfway across the world, in Seattle, Anastasia Babenko is running late for our 11:30 a.m. meeting.

“I was on the phone with my parents,” Babenko explains as she arrives, phone in hand. “They were able to get to the border.” Earlier that week, they had fled Babenko’s beleaguered hometown in northern Ukraine in a Volkswagen Passat, avoiding pockets of Russian soldiers by snaking through forest roads for more than 500 miles to reach the Polish border. “Now they are safe,” Babenko says. “I’m so relieved.”

Babenko, a local artist, filmmaker and former journalist, hasn’t been sleeping much lately. Her phone keeps her up at night, pinging constantly with messages from her friends and family back home and with news she checks constantly. She spends her days translating articles for a Ukrainian news outlet and selling some of her photo prints to raise relief funds. Still, Babenko agreed to meet and discuss The Middle Seat, a six-month-long series of solo art exhibits she co-curated with Anna Mlasowsky at the Ballard storefront gallery Das Schaufenster (through Sept. 29).

Conceived before the invasion, the exhibit was to feature Seattle- and New York-based immigrant artists from Russia, Hungary, Georgia and other former Soviet republics and so-called “Eastern bloc” countries — “the territory wedged between East and West,” as the exhibit copy announced. And then, on Feb. 24, as Russian President Vladimir Putin made good on weeks of tacit threats against the sovereignty of Ukraine, The Middle Seat suddenly became even more pertinent. “As all eyes are on central Europe right now, The Middle Seat has become [of] a different importance,” the curators wrote in a statement posted to Instagram four days after the invasion began. 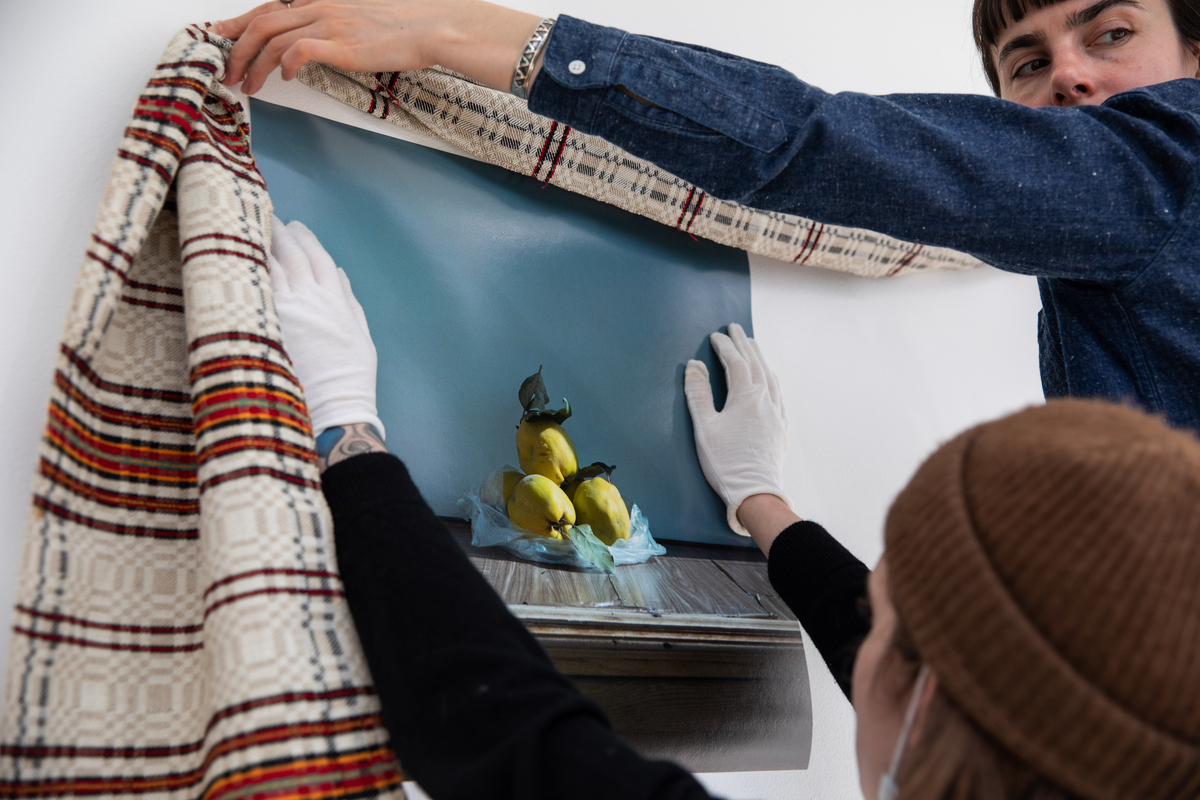 “In the first days, I was crying a lot and I was feeling a lot of hatred and rage, and it kept me going,” Babenko says. “But now I feel a lot of tiredness and emptiness.”

Still, a current of pride electrifies her as she spots the now-ubiquitous sunflower yellow and deep azure colors of her country’s flag attached to a coffee shop facade. “They have the Ukrainian flag out,” she says, smiling. She opens her coat to reveal a small, blue-and-yellow ribbon pinned to her black sweater. This display of patriotism is new for Babenko. In fact, she didn’t include any Ukrainian artists in The Middle Seat because she’d felt too self-conscious about it.

“Of course, this show would have looked a lot different if I made it now,” Babenko says after we sit down outside the coffee shop. For instance, grouping together artists from very different countries based on geography was misguided, she says now. While that aspect of the show is set, she is making some changes to the roster of artists as we speak. She’s asked Seattle-based Ukrainian artist Darya Husak to step in with a new exhibit, The Spring is so Imminent (through April 30), which will consist of photos and a small installation dedicated to Ukrainian customs and symbols of hope and renewal.

Babenko brings up a photo on her iPhone, taken by Husak last fall while visiting her grandmother in Uman, a small town south of Kyiv. In the photo, a few small religious paintings, surrounded by candles and dried lavender, line a small shelf on a wallpapered background. A golden-hued icon of Jesus — a beloved family heirloom — gleams in the middle. “When [Darya] was visiting … [her] grandma asked Darya to take this icon with her. But Darya refused, and the icon stayed in Ukraine — and now it's protecting Darya’s grandmother and the whole Ukraine.” 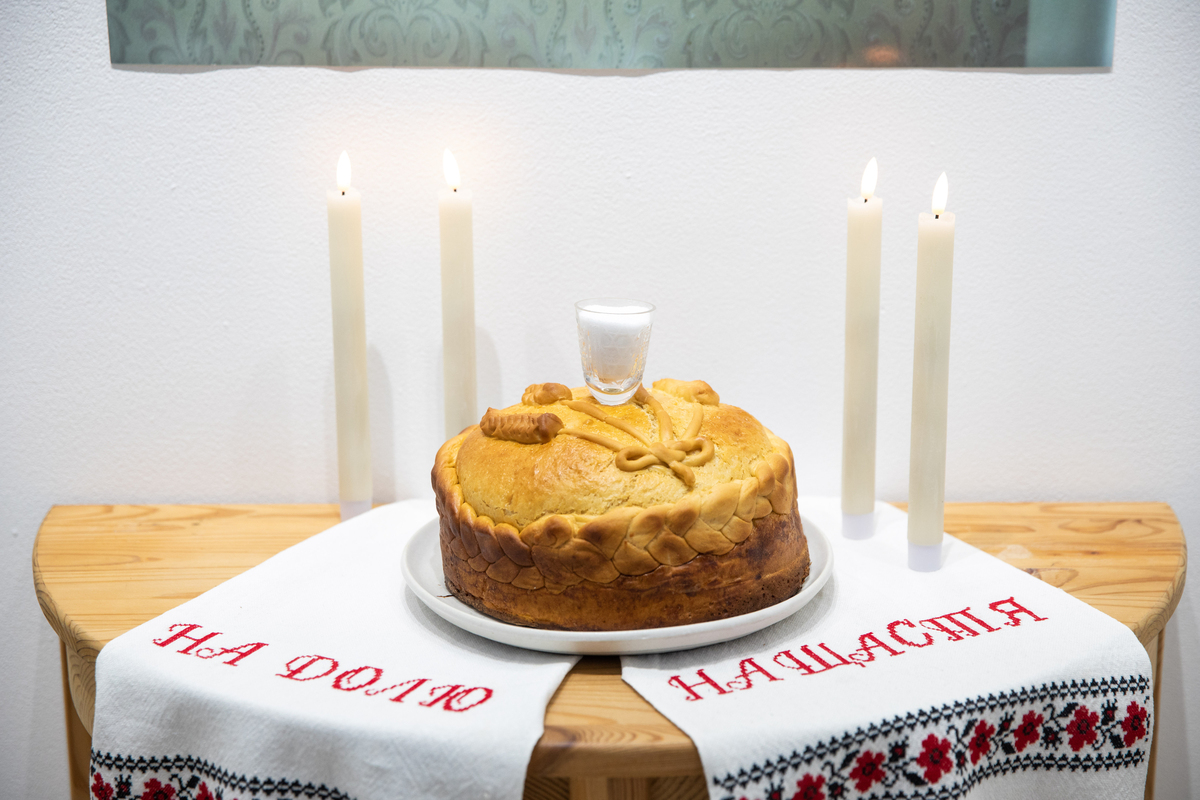 Darya Husak’s installation “The Spring Is So Imminent” takes its title from a poem by Ukrainian writer Serhiy Zhadan and represents rebirth. The text on the fabric says “na dolju” and “na shastja," which translates as “to fate” and “to happiness.” (Amanda Snyder/Crosscut)

Darya Husak’s installation “The Spring Is So Imminent” takes its title from a poem by Ukrainian writer Serhiy Zhadan and represents rebirth. The text on the fabric says “na dolju” and “na shastja," which translates as “to fate” and “to happiness.” (Amanda Snyder/Crosscut)

Like Husak, Babenko was born and raised in Ukraine and moved to the U.S. in the last decade. Babenko was born in Slavutych, a small city built for the workers who evacuated the Chernobyl Nuclear Power Plant following the 1986 nuclear disaster. After Russian forces encircled the town last month, and residents remained for days without electricity, hot water or food, her parents fled.

“It's a tragedy for them. I left because it was my choice. They left because they were forced,” Babenko says. “I have enormous guilt for being outside of Ukraine right now. And I know that a lot of Ukrainians who left during the war have the same feeling. Even my friends who are still staying in Kyiv, in bomb shelters, who are not on the front lines. We all feel guilt. For not fighting.”

Babenko tells herself she’s helping to fight the “information war” by working with news outlets and creative agencies to create videos to combat disinformation for Russian- and English-speaking audiences. And while Babenko feels that making art seems almost frivolous right now, in the days following our interview, she will continue working with Husak on prepping the installation of The Spring Is So Imminent.

For now, it is giving both artists a purpose: “Celebrate and emphasize Ukrainian heritage,” Husak says during the installation of her show on a Thursday in late March. “We want to show the more soulful and heartful way of Ukraine. That it’s not destruction, that it’s not a ruin, that it's actually a very rich and deep history that gets passed on and carried on through generations.”

We’re in the back space of Das Schaufenster, which occupies a small square space in the display windows of a former corner grocery store in Ballard. A forceful morning sun blasts through the glass. It’s Day 36 of the invasion. In Ukraine, humanitarian officials are trying to evacuate people from the besieged city of Mariupol as fighting continues amid confusing reports of peace negotiations and a potential partial Russian withdrawal.

In Ballard, in the shadier back space, a large, pie-shaped loaf of bread rests on a plate. It’s a traditional Ukrainian wheat-flour bread known as korovai, baked for celebrations like weddings. “To me, it symbolizes unity and peace, and also prosperity,” says Husak, a Seattle-based photographer and nursing student. “The braid around is [a symbol] of unity and togetherness, and the wheat is for prosperity, and for well-being, but also peace.” This, she adds, is the bread that newlyweds are presented by their in-laws. The custom is to dip a piece into salt, “symbolic of sweetness and saltiness to life,” she says. “You have to savor [the saltiness].” 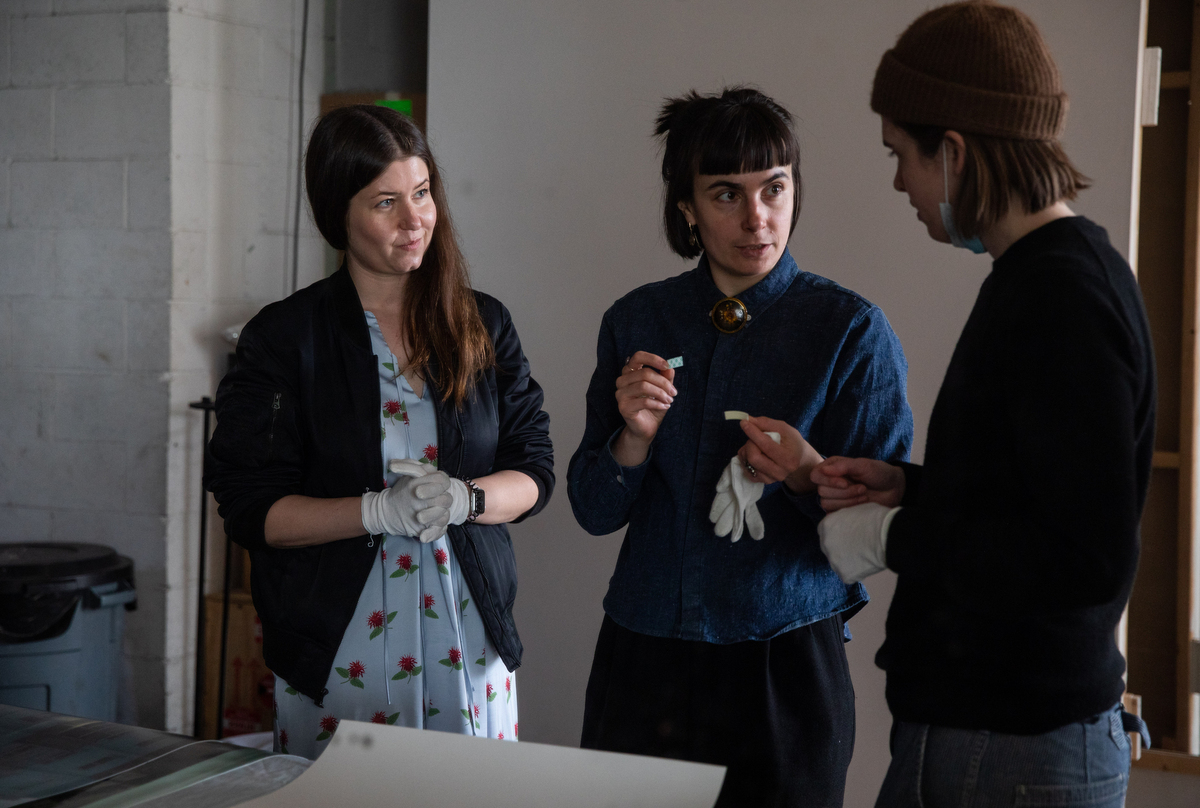 Next to the korovai lie two folded rushnyks, Ukrainian embroidered wedding cloths. These will be hung on the wall, framing a trinity of photos Husak made in Ukraine during regular visits over the past years. The first one shows the altar with the icons in her grandmother’s bedroom (a common encounter in Ukrainian homes), and another shows yellow quinces basking in rays of sun in front of a light blue backdrop. The third photo, which Husak made in October in Kyiv, shows a woman smoking a cigarette from her balcony, talking with a neighbor below, out of the frame. A small, yellow square of sun spotlights her against the baby-blue building’s facade.

“Quintessentially Ukrainian,” Husak says of the building and its trademark “post-Soviet” balconies.

“Beautiful and ugly at the same,” Babenko adds, laughing.

It’s not just the architecture or the blue-and-yellow hues of the photos that are quintessentially Ukrainian, Husak notes. The customs and culture that underlie those scenes are, too. The older woman, while living in Kyiv, a major city, still knows her neighbor. Husak photographed the quinces in the house she grew up in; these photos are all taken at or from the homes where Husak grew up. “Which is another thing about Ukrainians: We don't tend to move around much,” she says as she positions the photo print on the wall with Babenko’s help. "Ukrainians [are] very much like little crabs. Once you find your little niche, you want to stay there."

Dried flowers — traditionally picked during spring and summer, blessed in church and kept dried in the house — will help frame the triptych of photos, with candles and bread on the table below. Together, these elements take the shape of the traditional altars or prayer corners you can find in many Ukrainian houses. “I think it's beautiful and symbolic that Darya is trying to re-create a home praying corner while she's away from home,” Babenko says. “And her grandmother had to leave.”

Husak’s 78-year old grandmother, who is now safely in the U.S., was able to bring the icon painting back to Seattle. “She forgot a lot of other things: family albums and photos and [other things] she probably didn't have a chance to bring.… She had to leave at 3 in the morning,” Husak says. “But at least she escaped with something. She fled with more than a majority of people did. And I think at this point, you don't care what possessions you left behind. You care about people being alive. And, unfortunately, many Ukrainians do not have that.”

As of early April, more than 4 million refugees have fled Ukraine, according to the United Nations, making it Europe’s biggest exodus since World War II.

The altar is a fitting, maybe even hopeful, ode to home for Ukrainians who have seen their homes destroyed and many more who have been forced to leave their homeland behind.

To Husak, the altar is also a symbol of Ukraine’s sovereignty from Russia, in both a literal and cultural sense. “There's a lot of conversation about … [our] similarities. And it’s like: It’s hard not to have similarities with people who oppressed you,” she says, noting that Russia has a history of stifling Ukrainian cultural heritage, customs and language (including, at one point, imprisoning and killing intelligentsia and artists).

Honoring some of Ukraine’s traditions in the face of what Husak and Babenko see as just the latest wave of an attempt at destruction feels significant, particularly as the spring harvest season starts and Easter approaches. “There’s a lot of mythology, spirituality weaved into a lot of Ukrainian folklore and symbolism,” Husak says. “And a lot of it has to do with hope and love and kindness and peace. I hope most Ukrainians get to experience it.” 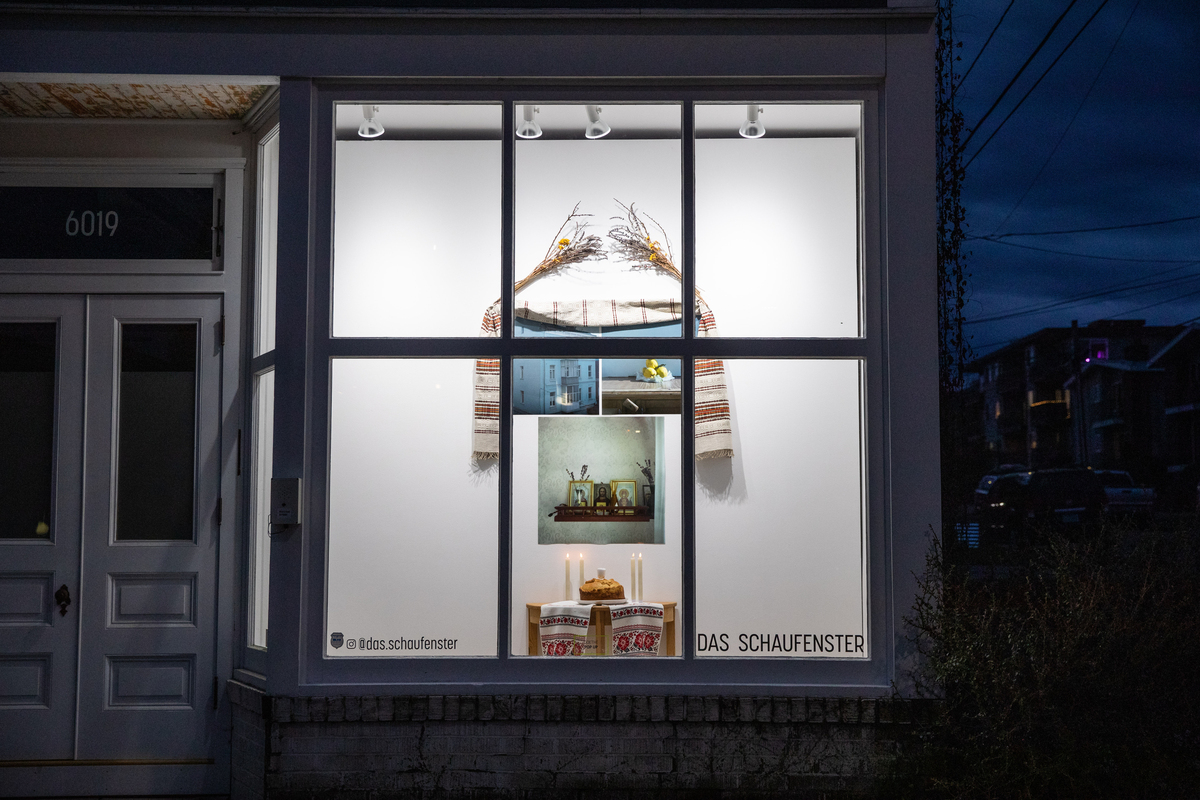 Darya Husak’s installation “The Spring Is So Imminent” pays homage to a prayer corner you may encounter in Ukrainian homes. The exhibit is on view through April at window gallery Das Schaufenster in Ballard. (Amanda Snyder/Crosscut)

Darya Husak’s installation “The Spring Is So Imminent” pays homage to a prayer corner you may encounter in Ukrainian homes. The exhibit is on view through April at window gallery Das Schaufenster in Ballard. (Amanda Snyder/Crosscut)