Plus, sublime slime and a trip to space. 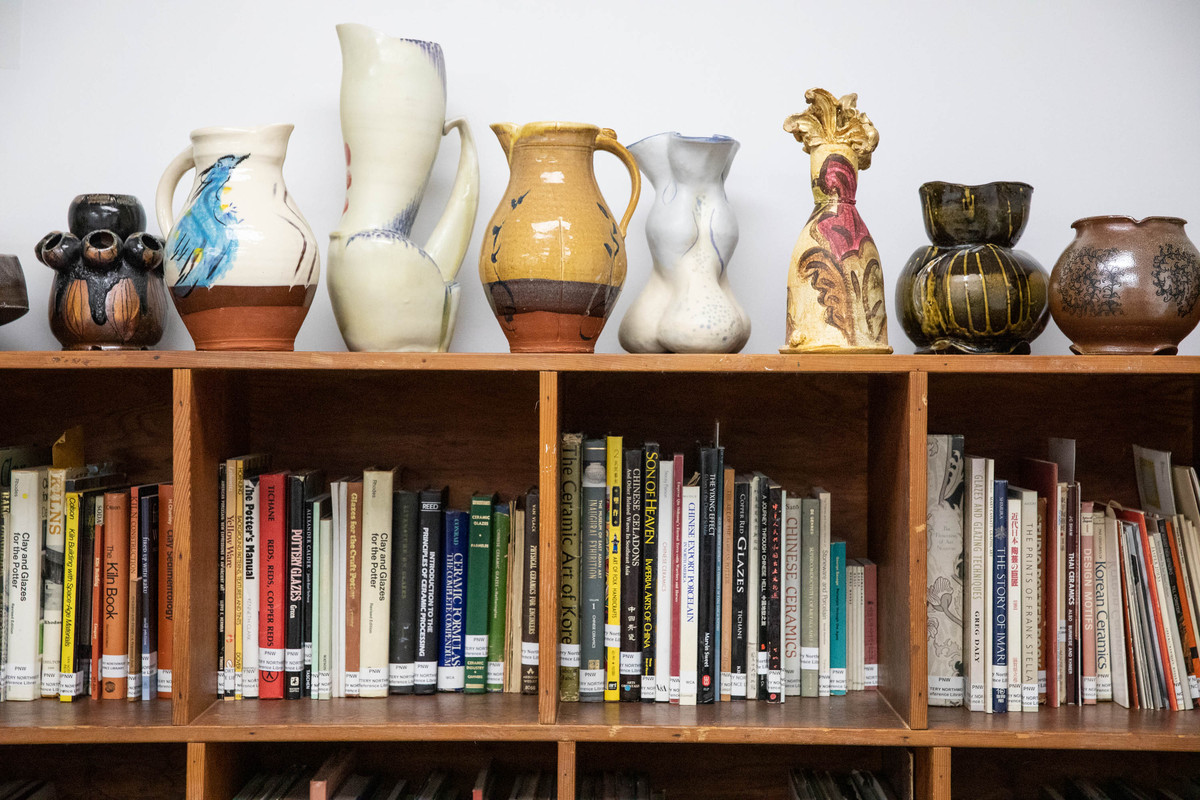 Ceramics and books in the kitchen of the revamped Pottery Northwest in Pioneer Square on May 11, 2022. (Amanda Snyder/Crosscut)

On a recent spring day, I walked into Pioneer Square gallery Foster/White and headed straight for the basement. The reason for my descent: the sprawling souterrain is the new home of renowned local ceramics studio Pottery Northwest.

From its historic red-bricked “Bressi Garage” on the Seattle Center campus, the longtime arts org offered classes in hand-building and wheel-throwing and showcased local pottery for close to half a century. But the lease expired last year, amid the development of and around the Climate Pledge Arena.

A challenging search for a new, affordable space led the organization to Foster/White’s former storage area. Gallery director Phen Huang helped cover some of the $600,000-plus renovation of the 8,700-square-foot space, which will house its offices, gallery and studio space.

The build-out was still in progress during my visit this April. Across the space, which gets some daylight from windows at the back of the building, rows of potter’s wheels had yet to be hooked up as closemouthed kilns awaited their first batch. (Notable: there’s no gas hook-up here, so gas-fired kilns are out of the question until Pottery Northwest can find another solution.)

“This is going to be a little like Christmas, because I won’t actually know who's in here until we unwrap them,” said Chanda Zea, Pottery Northwest’s programs director, as she peeled off layer after layer of newspaper from slip-cast vases and wheel-thrown vessels. Part of the studio’s teaching collection, these vessels would soon be displayed on the shelves, Zea explained.

Everything should be unpacked by now. Pottery Northwest soft-opened this week for classes and studio access. The move — which comes on the heels of challenging pandemic years and a public call to address equity concerns — comes at a pivotal moment for the organization. Can it reinvent itself?

“I hope that we're going to continue to have the kind of community feeling that we've always had,” Cappy Thompson, longtime Seattle artist and outgoing Pottery Northwest board president, told me during the visit. “I know we will, because you just can't get your hands in clay without relaxing and having a good time.” 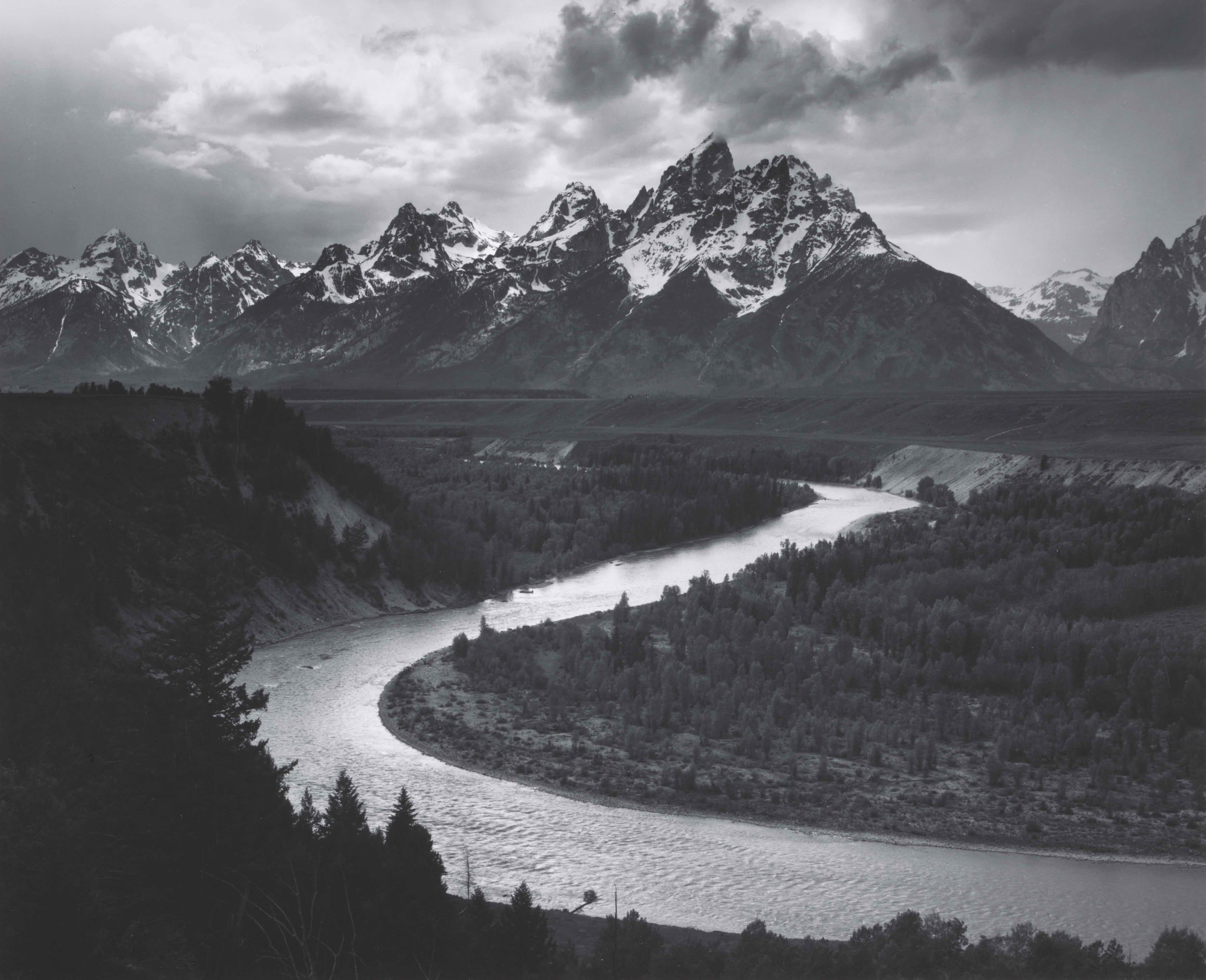 I also recently paid a visit to Seattle’s Museum of History & Industry to get a sneak peek of the new photo exhibit by famed American landscape photographer Ansel Adams (1902-84) — titled: Ansel Adams: Masterworks — opening this Saturday (May 25-Sept. 5).

“Not only was he a master of composition, of exposure, of tonal quality, he was also an incredible master of the printing process,” enthused Leonard Garfield, MOHAI's executive director, when he walked me through the dim exhibition room (the low lighting is to protect the photos from ultraviolet damage).

Overwhelmed by the sublime vistas of cragged rocks and snowy mountain tops, I felt a pull toward the nuances revealed by way of this technical prowess: the fog between the trees, the puffy clouds and the ethereal light beaming down from the heavens.

A passionate conservationist, Adams often trained his lens on the American West. The show includes some of his greatest hits in this genre, taken in Yosemite National Park, Monument Valley in Arizona and the Grand Teton National Park in Wyoming.

I asked Garfield if there was a Pacific Northwest connection, too. “He didn't spend as much time in the Northwest, unfortunately,” Garfield said, as he led me to the sole “local” photo in the show. Taken in Mount Rainier National Park around 1942, the photo depicts a fresh fern in the darker shrubbery, dewdrops dotting the leaves. It’s called, simply, “Leaves.”

I told Garfield I was surprised that Adams would focus on a fern, when the most majestic mountain of all (at least to my mind) was right there. “To me, the Northwest is about the undergrowth,” he replied. “There’s this wonderful canopy that allows nature to constantly reinvent itself, if you will, season after season. And he sort of captured that.” 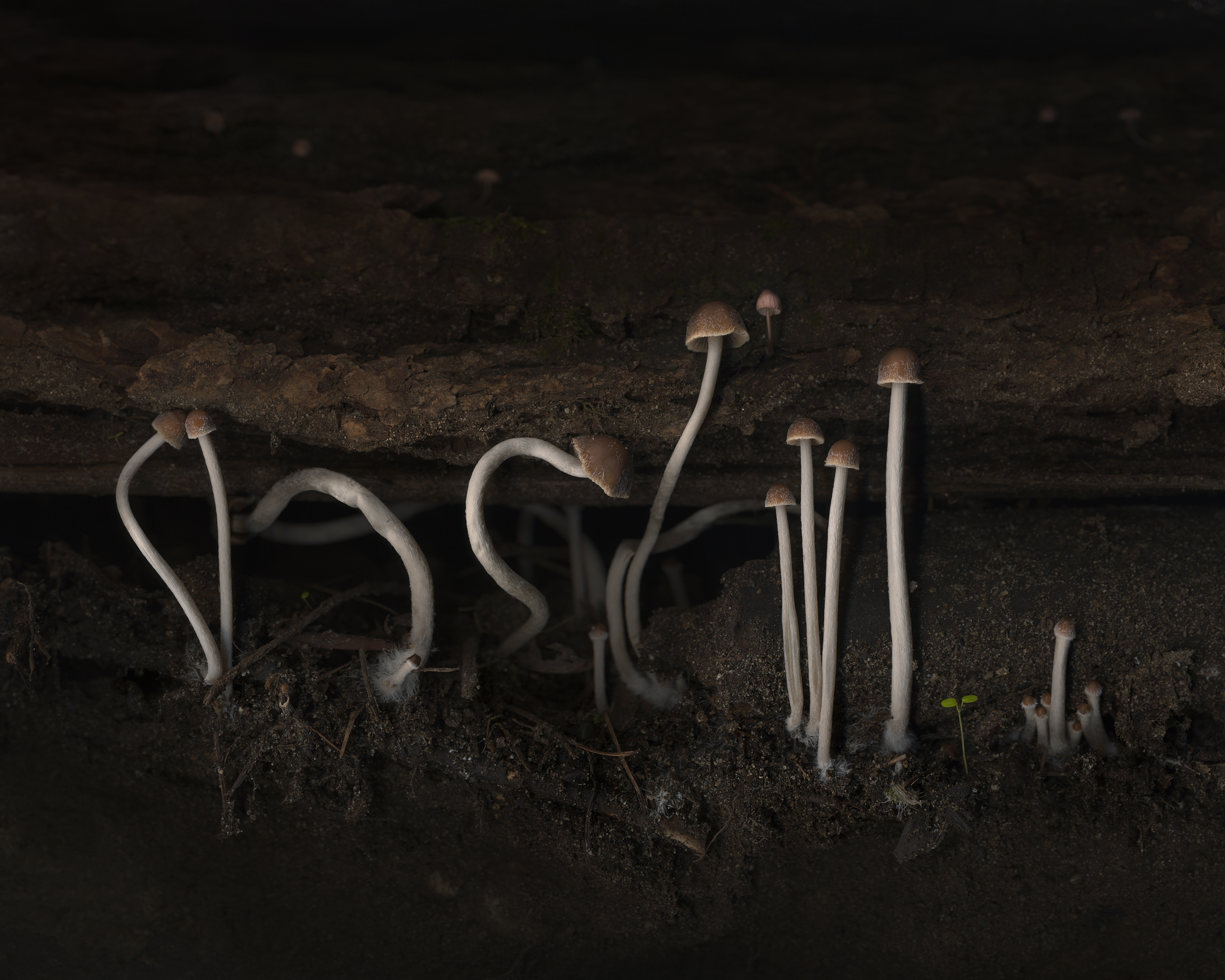 In "The Workers," the title of this photo and a new exhibit by Melinda Hurst Frye, the photographer pays homage to the characters, fungal and otherwise, found on the forest floor. (Melinda Hurst Frye/J. Rinehart Gallery)

In "The Workers," the title of this photo and a new exhibit by Melinda Hurst Frye, the photographer pays homage to the characters, fungal and otherwise, found on the forest floor. (Melinda Hurst Frye/J. Rinehart Gallery)

Also capturing the regenerative power of ground cover is Seattle photographer Melinda Hurst Frye. In the exhibit The Workers (of the Forest Floor) (through June 18) at J. Rinehart gallery, Hurst Frye shows new work in her ongoing series of forest floor ‘scans.’ By means of a high-resolution flatbed scanner and a camera, she zooms in on the mysterious ecosystem below our feet, aka the fungi, slime molds and other “workers” taking “the forest apart, so it may become again.”

With Adams, Hurst Frye shares a keen awareness of light — opting for strong contrasts and strategically lighting up sections of lichen, fungi or grass — and nature’s visual patterns. Both exhibits highlight the fragility of our ecosystem, worthy of our attention in both the artistic and conservationist sense. While Hurst Frye’s is a very different kind of sublime, slime mold has never been so beautiful. 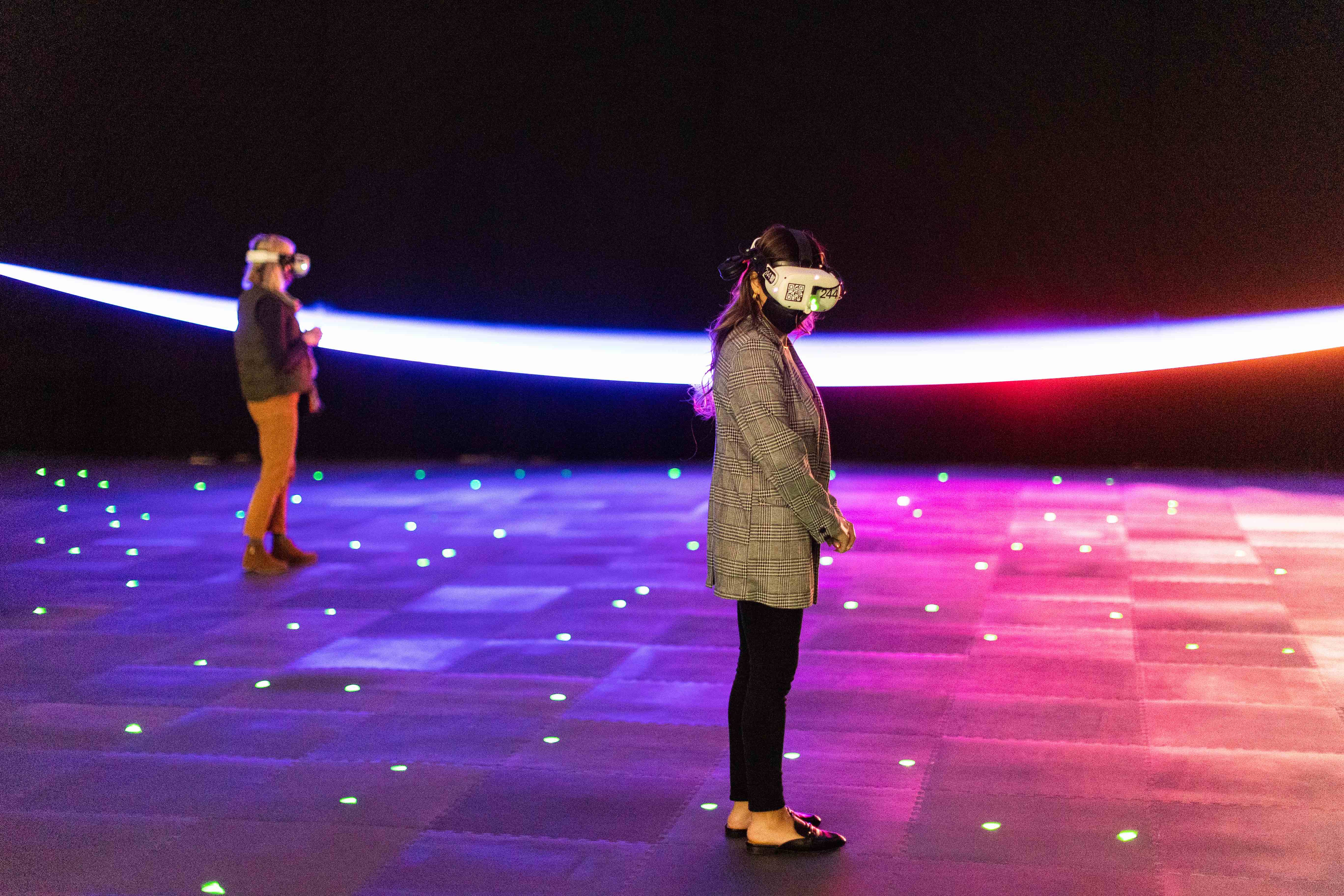 "The Infinite," a virtual reality and immersive exhibit at the Tacoma Armory, promises an "out of this world" experience of space travel. (The Infinite)

"The Infinite," a virtual reality and immersive exhibit at the Tacoma Armory, promises an "out of this world" experience of space travel. (The Infinite)

Now, let’s zoom out so I can take you from the infinitesimal to the infinite — space. Or at least, the closest thing to it for those of us who can’t afford a ride on a billionaire’s rocket ship: virtual reality.

In the exhibit “The Infinite” (through July 31), which opened at the Tacoma Armory earlier this month and bills itself as “the world’s largest interactive immersive experience about space exploration,” you will get a sense of what it feels like to be an astronaut in the International Space Station, see Earth from 200-plus miles above and do a spacewalk in 360 degrees.

I have not visited yet but am particularly looking forward to the apotheosis, a no-goggles-required immersive artwork by Japanese artist Ryoji Ikeda. Titled “The Universe Within the Universe,” the installation consists of a pitch-black room with an LED ceiling and mirrored floor, designed to create “the feeling of weightlessness and even vertigo.”

I’ll be honest, ever since my immersion in Van Gogh’s weirdly upbeat universe, I am fairly skeptical of “immersive exhibits,” but with everything that’s happening on this planet, I wouldn’t mind a quick trip to space, sans motion sickness. Beam me up! 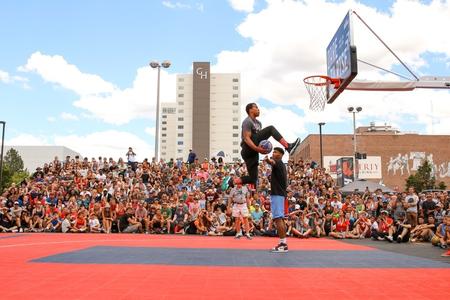 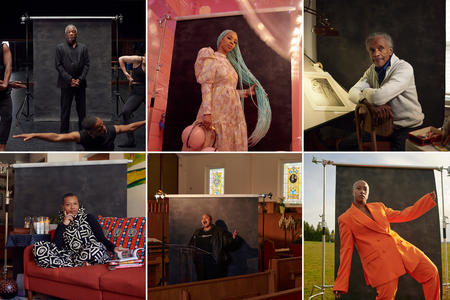 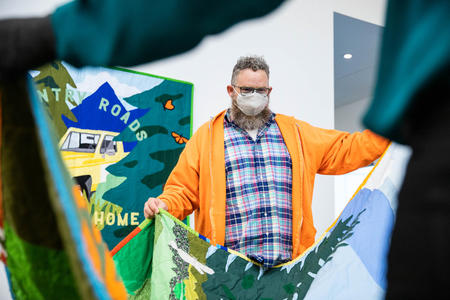 by / May 23
Article continues below