Seattle painter Alfredo Arreguín shows out of this world paintings at the Museum of Northwest Art. 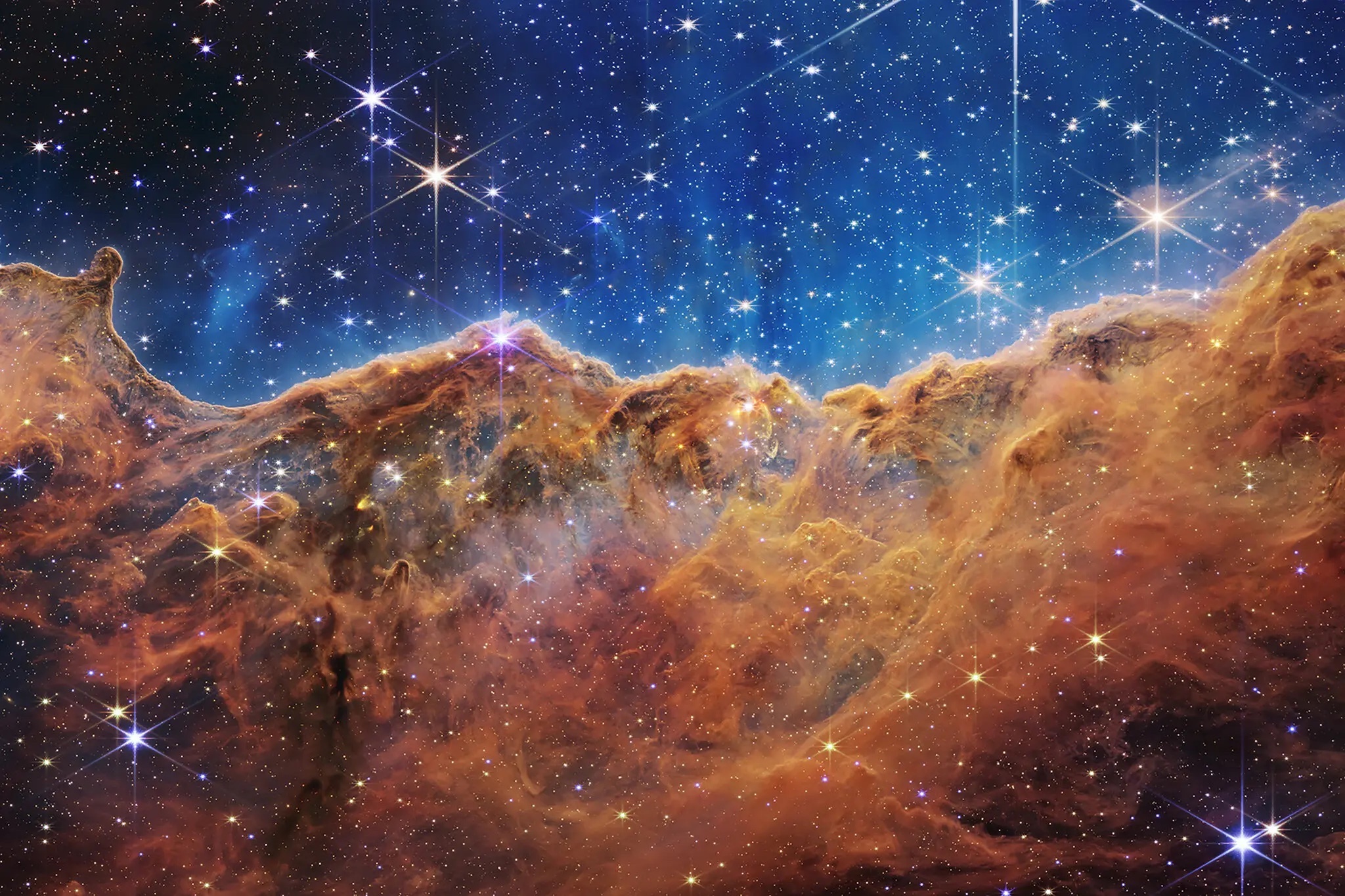 NASA recently released this image captured by the James Webb Space Telescope, which shows the ‘Cosmic Cliffs’ of the Carina Nebula, known as a place in space where stars are born. (NASA, ESA, CSA, and STScI)

This week’s most exciting arts and culture news comes from the realm of far-out photography: those gobsmacking images captured by the James Webb Space Telescope. When the first deep space image was revealed — a mass of swirling sparks and red flecks against an infinite background — my heart morphed into an exclamation mark. Here we were, looking at multiple galaxies from billions of years back in time. What?!

And then more photos arrived from the final frontier: Stephan’s Quintet, a team of five galaxies galloping brightly inside the Pegasus constellation; and the Southern Ring Nebula, a dust-cloaked dying star resembling a close-up of a brown eye clouded by a hazy-blue cataract. But my favorite so far is the “Cosmic Cliffs” of the Carina Nebula, a layered landscape portrayed in sparkling celestial paint.

NASA explained that what appears to be a rugged mountain range is actually the edge of a “star nursery” (a star is born!), where “the tallest ‘peaks’... are about 7 light-years high.” This is not a system of measurement I’m conversant with, but I can confirm that the image is both a mind-boggling scientific achievement and an aesthetic stunner.

Time traveling through space, thumbing through photographs of our galactic origins — such endeavors remind us that when Carl Sagan said “we’re made of star stuff,” he wasn’t speaking metaphorically. 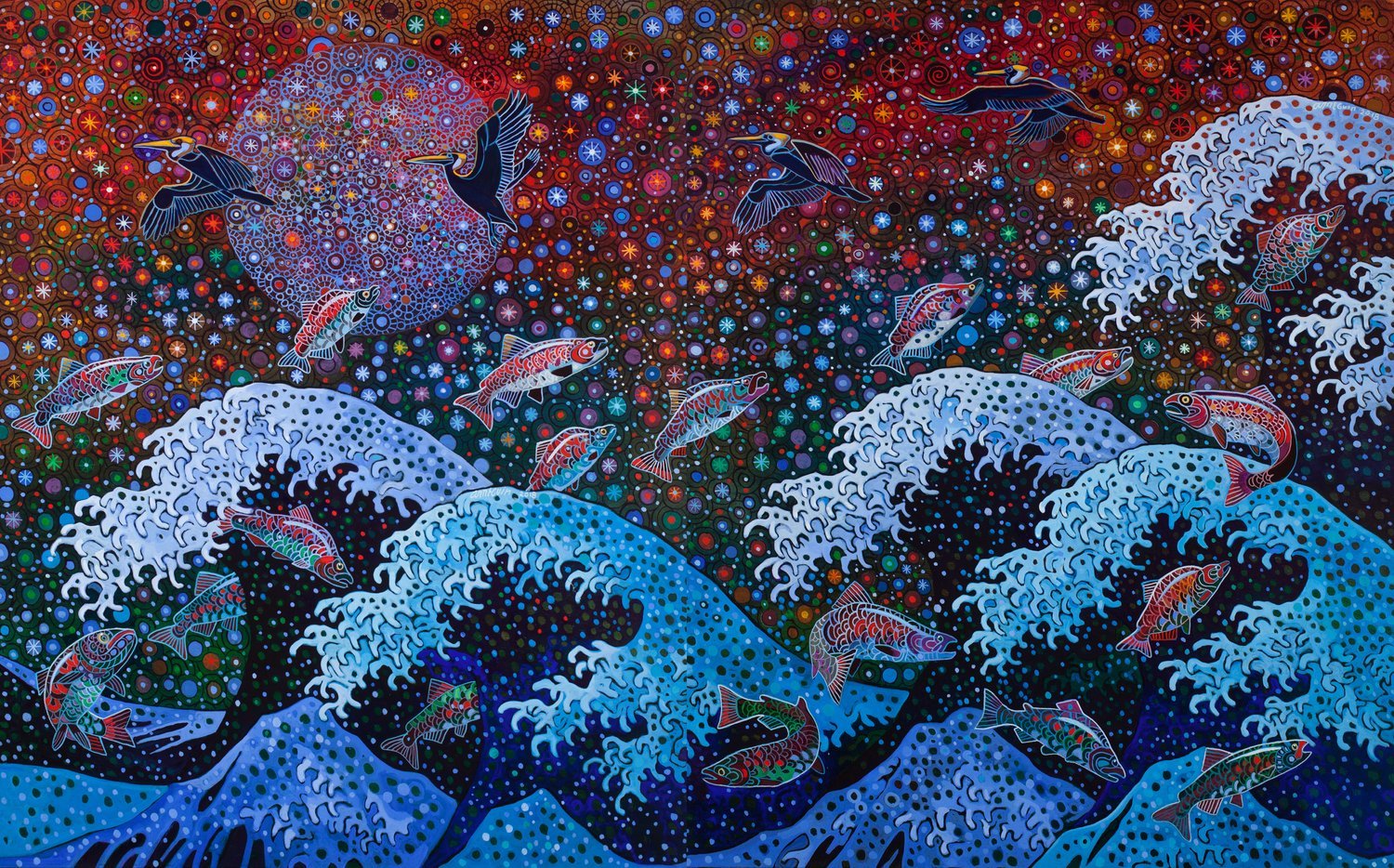 “Suquamish Waters” (2018), by Alfredo Arreguín, is part of ‘Arreguín: Painter from the New World,’ an expansive survey of the longtime Seattle artist’s work. (Museum of Northwest Art)

“Suquamish Waters” (2018), by Alfredo Arreguín, is part of ‘Arreguín: Painter from the New World,’ an expansive survey of the longtime Seattle artist’s work. (Museum of Northwest Art)

Those “cosmic cliffs” brought to mind a painting I recently saw at the Museum of Northwest Art in La Conner: “Suquamish Waters” (2018) by longtime Seattle artist Alfredo Arreguín. The large-scale work features a palette similar to the space image — sunset orange and cloudy blue — with repeated crest shapes (waves and mountains) and a hovering moon. In both images, deep skies are carbonated with multicolored stars.

The piece is part of an expansive survey, Arreguín: Painter from the New World (through Oct. 9), which showcases the artist’s skill at portraying nature, animals, mythology and the humans who inspire him in a visual manner that feels almost molecular. When I was there, I watched as two people stood in front of another of his pieces for a little while. “Oh look,” one woman said, pointing. “I hadn’t seen that before. I keep seeing new things.”

A space telescope might be helpful in viewing Arreguín’s work. The incredible depth of perspective is a result of images layered on distinct spatial planes, and the vibrancy comes from repeated patterns that recall the traditional tile work in his native Mexico.

Born in 1935 in Michoacán, Arreguín came to the U.S. to attend art school at the University of Washington, where he earned a Bachelor of Arts and a Master of Fine Arts in the late 1960s. (Upstairs at MoNA, don’t miss In Pursuit of Abstraction, an excellent show of works sourced from the museum’s permanent collection, by some of the UW art teachers who influenced Arreguín, including Jacob Lawrence, Michael Spafford, Alden Mason, Viola Patterson and Francis Celentano.)

Arreguín has made art in Seattle ever since, refining and expanding on the technique he developed as a “pattern painter,” packing small images next to each other to create a larger whole — be that a massive “Crazy Quilt” of countless ancient faces or a recognizable portrait of Frida Kahlo.

With some 50 years of paintings on view, we see how Arreguín has time-traveled into his own past, probing for clues and inspiration as to how he arrived here. His dedicated explorations of Mayan chiefs, Mexican revolutionaries, artists, ecosystems and endangered species seem to be reaching toward another of Sagan’s famous phrases: “The cosmos is also within us.” 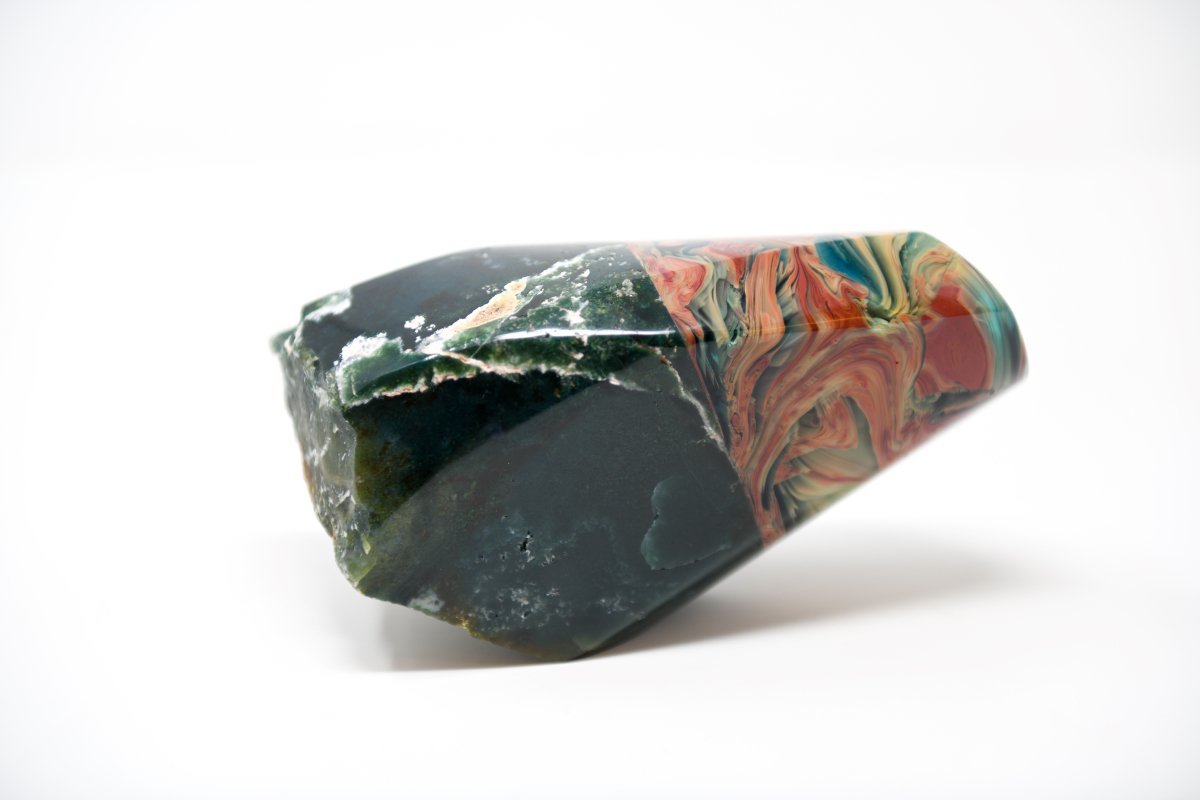 Things to do… in space!

If you’re looking to maintain the space vibe, don’t sleep on the exquisite interstellar dinner party happening upstairs at the Museum of Museums. I wrote about Orly Anan’s remarkable Salon Delicatessen: A Cosmic Feast last month, and the immersive show is up through Aug. 31.

Also worth tripping out on: the galaxies contained within the small glass and stone sculptures by Tacoma artist Weston Lambert at AMcE Creative Arts (through Aug. 28). Melding glass with gemstones such as rose quartz, labradorite, jasper and lapis in his Unconformity series, Lambert creates shiny-smooth encapsulations of our own planet’s mineral multitudes.

For an impeccably polished rock on a different scale, you can’t go wrong with “Black Sun,” Isamu Noguchi’s 1969 sculpture, which appears to be forever on the brink of rolling into the reservoir at Volunteer Park. The 9-foot-tall, 12-ton black granite doughnut resembles a gear that fell off of some alien spacecraft and landed in perfect position — with a satisfying view of the Space Needle.

And at the Henry Art Gallery, the Light Reign: James Turrell SkySpace — in my mind, one of the absolute best art immersions in the city — is reopening July 23 after being closed for a time. There’s simply nothing comparable to this open-to-the-sky, meditative oval room if you want to feel for a moment like you’re in a space capsule, watching worlds float by.

(For those who prefer to keep their feet on the ground, see our list of Things to Do in Seattle this July.)

News from the copy desk

Before I sign off: I’ll bid a fond farewell to Crosscut copy chief Mark Watanabe, who has trained his eagle eye on this newsletter since its inception, and who this week departs for a well-deserved retirement. Mahalo, Mark, for always making sure ArtSEA is buttoned up before it leaves the house! May your retirement be filled with art and aloha.