Seattle’s ‘Titanic’ spoof has songs and satire on deck 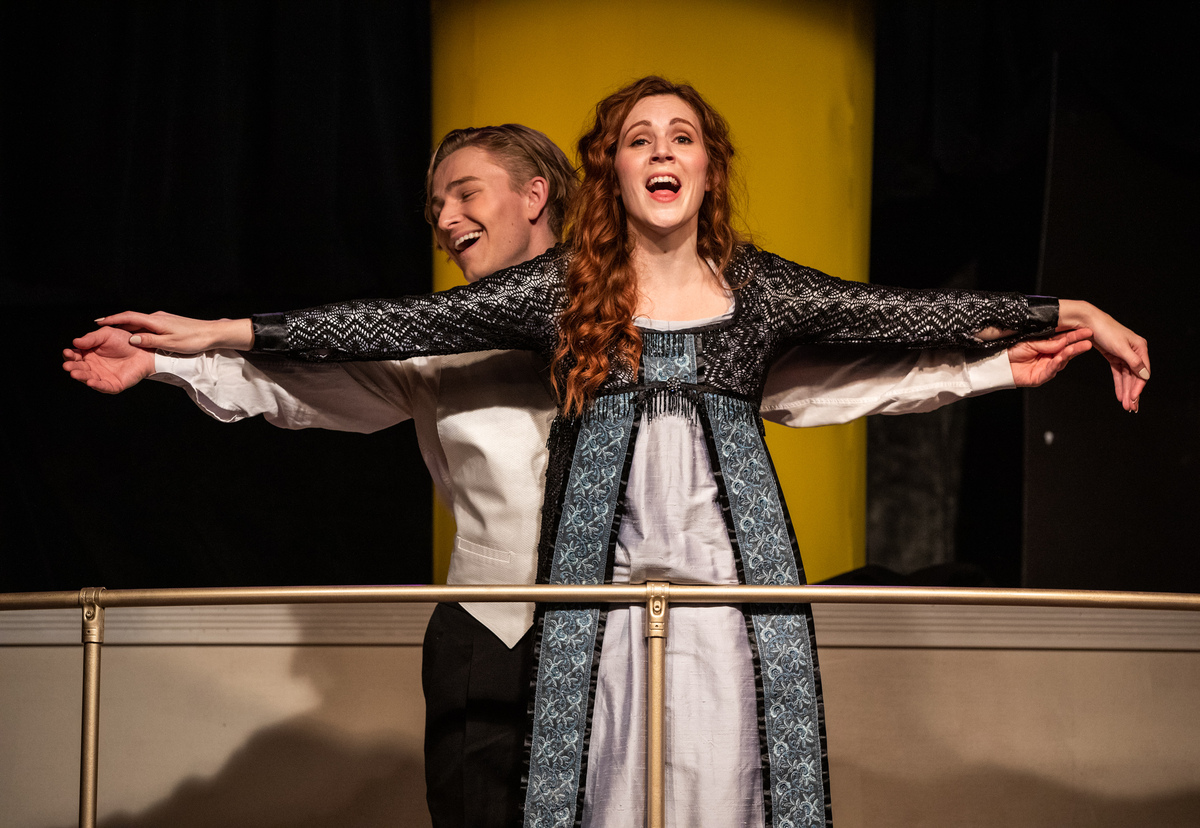 Is the news giving you the blues? If you’re looking for things to keep you up at night, there is plenty to fret over: the cavalcade of new COVID variants, explosive Supreme Court decisions, global warming, double-digit inflation.

But if you crave a break from fretting about how to rearrange the deck chairs on our own (figurative) Titanic, Titanish (July 15 - Aug. 7 at the Green Lake Bathhouse) may be the show for you. At least that’s what the practiced parodists behind this 85-minute theatrical lampoon of the famed 1997 movie are hoping.

And revisiting Titanic in a light-hearted, irreverent way is kind of apropos of this cultural moment, no?

That’s how Titanish director Mark Siano and co-writers Jeff Schell and Ryan Dobosh see it. “As we were the writing the script, Ryan picked up on it being a story about a disaster that could have been completely avoided if people had just taken precautionary measures,” Schell says. “We realized we could make jokes about Titanic, but also comment on what’s been going on recently with other things.”

Siano liked the relatively comforting idea of reaching back into 1990s pop for his musical score — which includes snippets of familiar hits of the era (including “My Heart Will Go On,” Celine Dion’s schmaltzy theme song for Titanic), along with original songs Siano composed for the production, to be performed live by a cast that includes strong singers.

But Siano also believes making audiences chortle is essential to our collective mental health. “Honestly, we are doing a bit of a service by giving people a chance to be distracted from what is undeniably a declining civilization,” he contends wryly. “America, we peaked! It’s kind of downhill from here on out. Having something to laugh at is pretty important these days.” 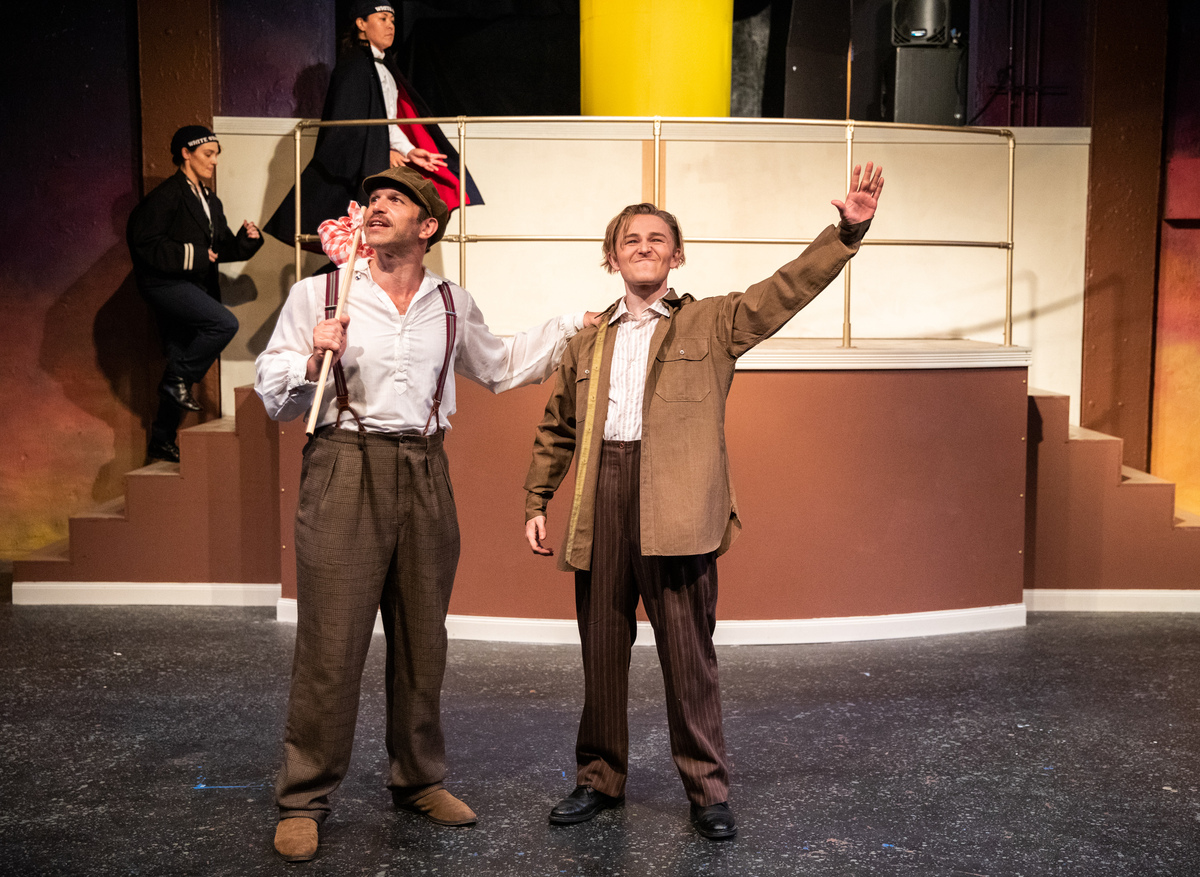 Judging by a recent rehearsal at Seattle Public Theater in the Green Lake Bathhouse, goofy jokes and silly sight gags should keep Titanish afloat and the audience onboard. The Edwardian touches are fun: the women in flouncy gowns and big picture hats taking selfies; the shipshape, brass-buttoned uniforms on the hapless crew. These are accompanied by some ridiculous props (including an invaluable “precious diamond” necklace that looks like a prize from a Cracker Jack box) and third-class passengers whooping it up with Irish step dancing.

The political skewers are scattered but sharp — as in the unhinged rantings of a Trumpesque figure, and the pair of passengers who refuse life jackets (offered to the audience as well) as the ship heads into the briny deep because they just don’t believe in them.

Otherwise, Titanish follows the movie plot (and the historical timeline) closely, if not terribly faithfully. The cavorting local cast includes actor-singers Justine Stillwell, as the comely young debutante Rose, and Kooper Campbell, as her steerage Irish amour Jack — both of whom resemble the lead players in the film, Kate Winslet and Leonardo DiCaprio. The two characters revel in their class-conscious romance — that is, until April 14, 1912, when the luxury British ocean liner (you’ll have to use your imagination for the luxe) crashes into an iceberg.

As in the film, the lovebirds try to save one another as the water rises — but, in this case (spoiler alert!) with umpteen gallons of imaginary water. Meanwhile, Misty Doty plays their “unsinkable” shipmate, the real-life socialite Molly Brown, with gale-force gusto. 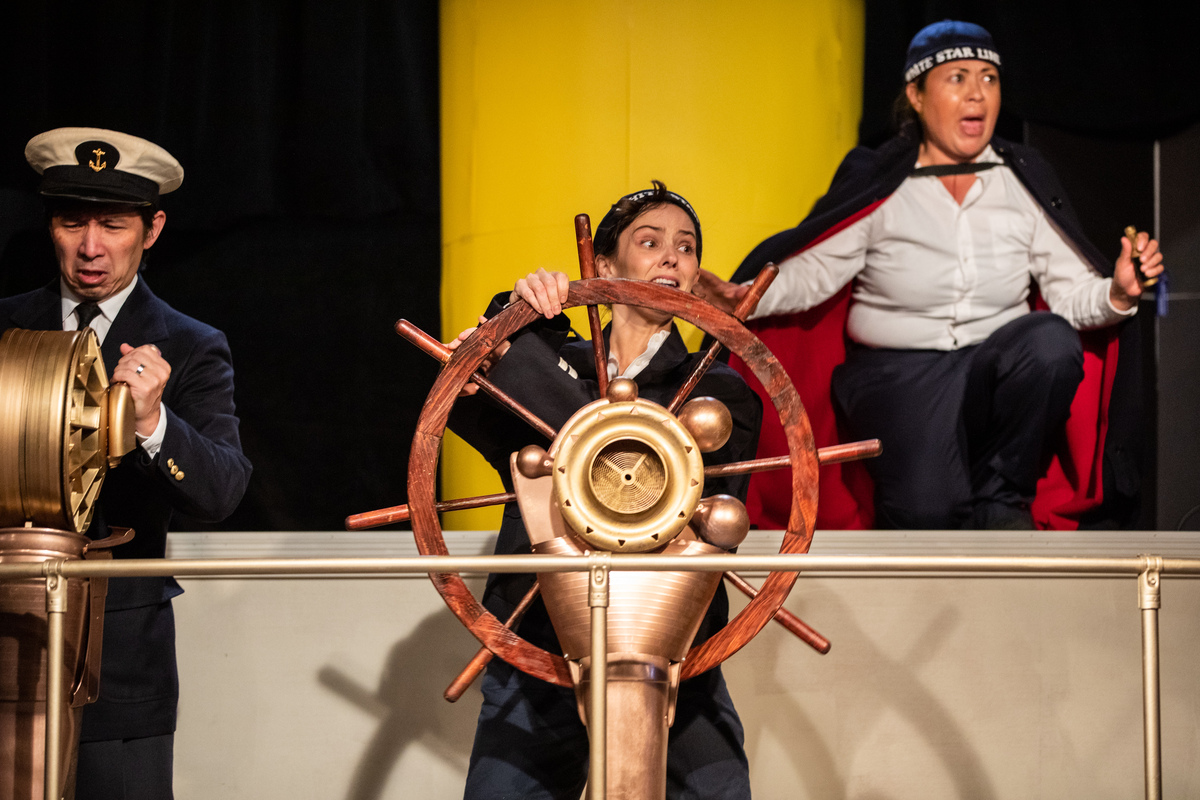 From left: David Hsieh as William Murdoch, Kayla Walker as Reginald Lee and Christi Cruz as Frederick approach the iceberg during a scene in “Titanish,” a live musical spoof on “Titanic,” at Seattle Public Theater in the Green Lake Bathhouse on Wednesday, June 6, 2022. (Amanda Snyder/Crosscut)

From left: David Hsieh as William Murdoch, Kayla Walker as Reginald Lee and Christi Cruz as Frederick approach the iceberg during a scene in “Titanish,” a live musical spoof on “Titanic,” at Seattle Public Theater in the Green Lake Bathhouse on Wednesday, June 6, 2022. (Amanda Snyder/Crosscut)

The creators of Titanish are old hands at spoofery. They met as drama students at University of Washington in 1996 and, with several other jesters, formed The Habit, a troupe that performed skit fests with free-ranging satirical targets.

After building a loyal following in Seattle over six years, members headed to Hollywood, where they took meetings with HBO and Comedy Central but, notes Siano, “We didn’t become famous.” So the group broke up and scattered to different locales.

But Siano continued to pursue his theater dreams in Seattle, concocting a steady stream of revues and spoofs for such venues as the Café Nordo cabaret in Pioneer Square, including the now-touring Bohemia, a Belle Epoque bonanza complete with absinthe cocktails. And with his former Habit partners Schell and Dobosh (both currently based in Southern California), he branched out to produce full-length musical comedy lampoons of cinematic megahits.

Their first such venture, A Very Die Hard Christmas was a 2018 rejiggering of the Bruce Willis action film Die Hard as a Yuletide tale. (It is returning to Seattle Public Theater this winter for the fourth time and has brightened the holidays in other cities as well.) 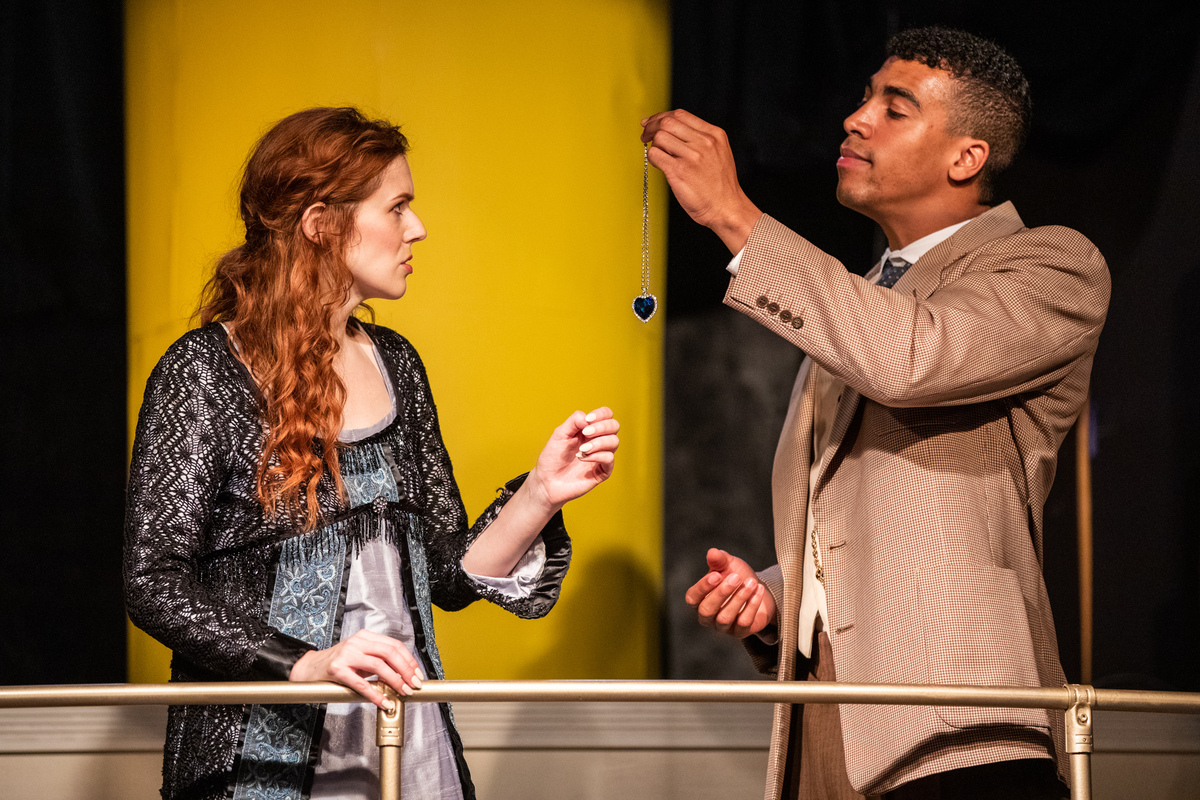 Next the trio took on Steven Spielberg’s multiple-movie Indiana Jones franchise with Indy Jones and the Raiders of the Last Temple of the Doomed Ark. That was in 2019. But even before live theater returned after the long pandemic hiatus, the collaborators decided to give ’80s movies a rest.

“We have now veered toward the ’90s, because our audience is actually getting younger,” says Siano, who like his colleagues is a Gen Xer in his 40s. “A lot of ’80s references fly right over their heads. When we do something like Indy Jones, the millennials and Gen Zs don’t always know what we’re talking about.”

They are banking on the idea that even theatergoers in their 20s will be familiar enough with Titanic to get the flotilla of gags in Titanish.

And maybe Titanic lore is having another moment in this disaster-prone era. A separate parody, the musical revue Titanique, just opened off-Broadway to positive reviews. And strange but true, a Norwegian Cruise Line ship smashed into an iceberg in Alaska in late June. (Unlike the ill-fated Titanic, the collision injured no one on board, fortunately.) The ship, with passengers intact, returned to Seattle for repairs — and will perhaps inspire another theatrical send-up, just when we really need one. 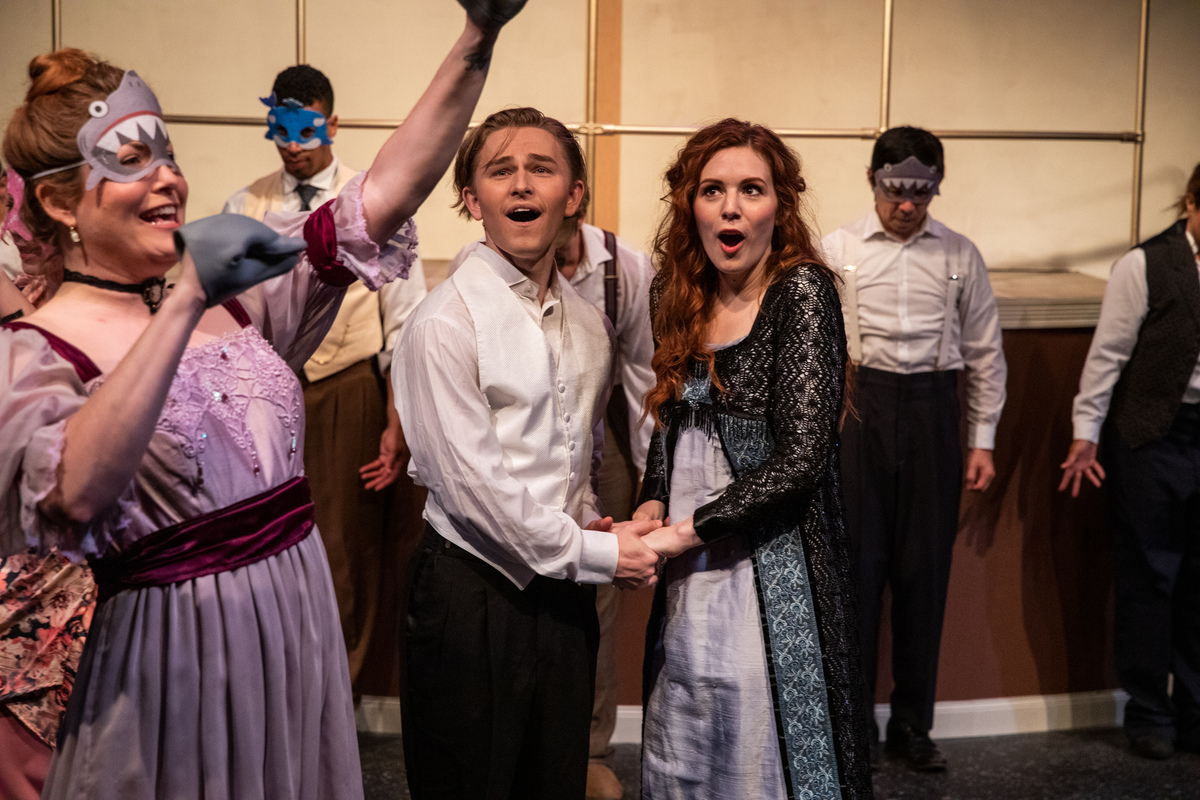 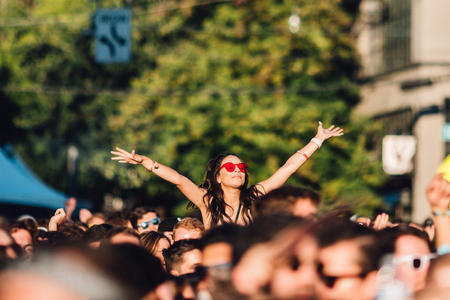 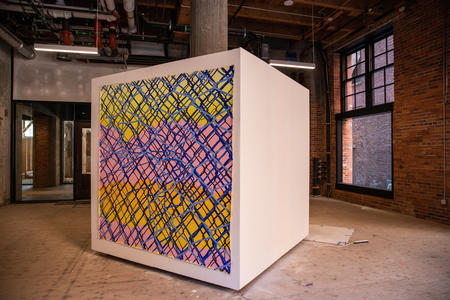 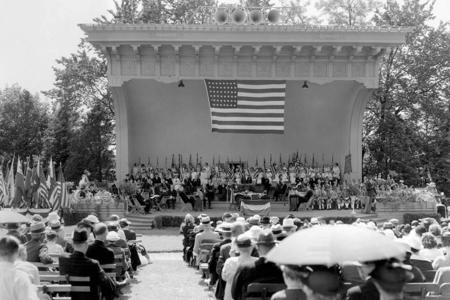