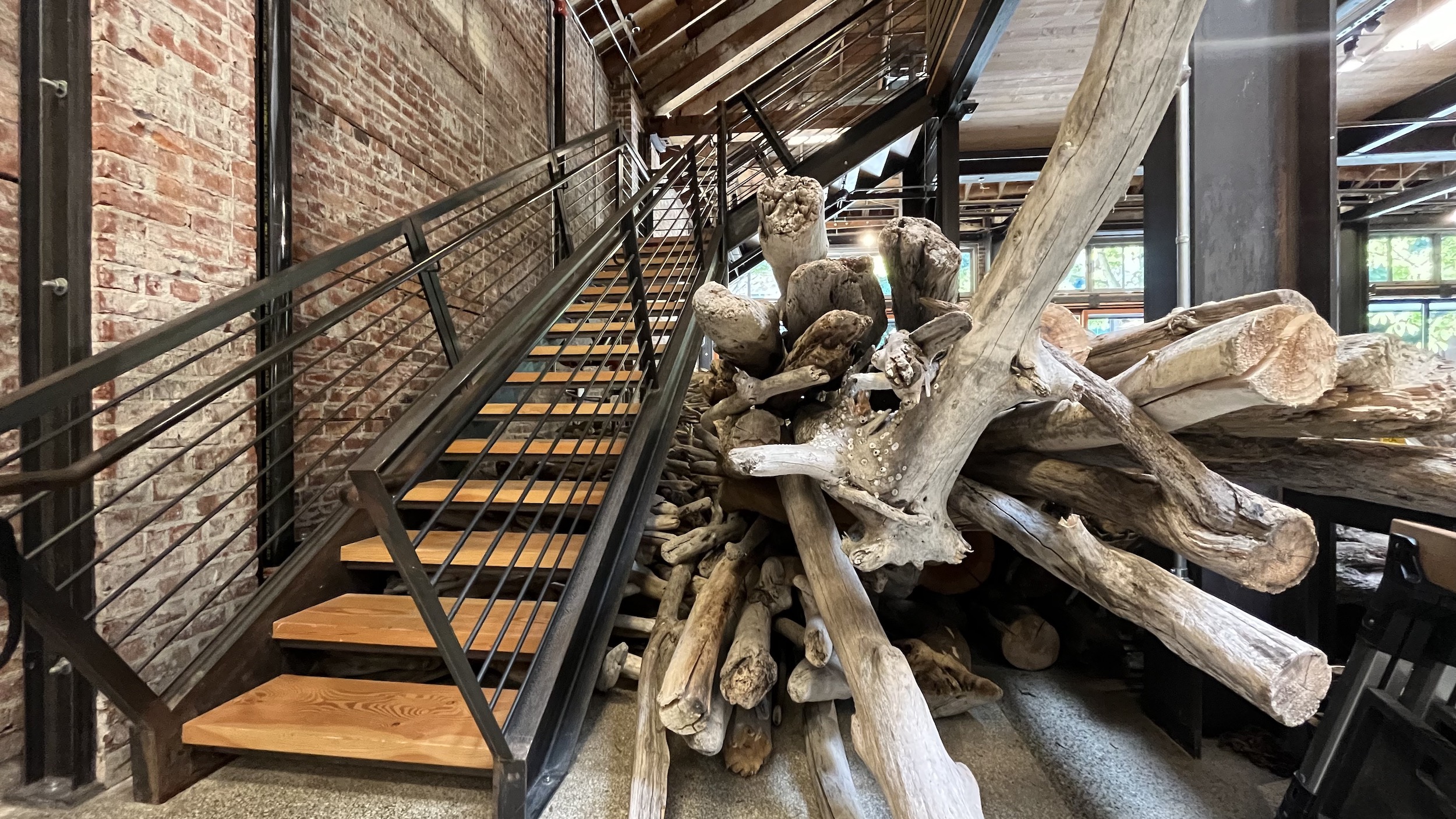 Seattle artist Alison Stigora’s ‘Salvage,’ now in progress at MadArt Studio in South Lake Union, is an immersive sculpture made of more than 30 large pieces of driftwood that were pulled from Puget Sound waters. (MadArt)

Step through the doors of MadArt Studio and the salted scent of the sea hits you like a gust of wind. That’s because “Salvage,” the new work in progress by Seattle artist Alison Stigora, is made of 30-some pieces of giant driftwood (and many smaller logs) that were plucked from the Puget Sound by the M/V Puget, an Army Corps of Engineers debris removal vessel.

One bleached stump splays its roots like a gargantuan sea anemone. Other logs are pocked with holes, pierced with metal bits, adorned with rusty chains and in one case, scraped with a swath of green paint from a boat collision. On another, a tuft of yellowed grass bursts forth like a firework.

Standing amid the timbers that crowd the gallery, you can smell sun-dried cedar laced with creosote — a hint that some of these logs have been subject to human industry. Weighing up to 2,500 pounds and stretching 22 feet long, the driftwood pieces are currently being pushed, dragged, lifted and secured into a towering wave form that when finished (open studio through Sept. 30; exhibit runs Oct. 2 – Nov. 23) will cradle visitors in a contemplative, aromatic space.

I first encountered Stigora’s work at the Blackfoot Pathways forested sculpture park, outside Missoula, Montana (highly recommended if you’re ever in the area). Her stunning piece “Clearing” is a human-scale nest made from wood charred by wildfires. Sitting inside it is a meditative experience, enveloped in both the dead wood of the sculpture and the living trees all around. Stigora told me she hopes the new piece will offer a similar opportunity for reflection — perhaps especially necessary in the current moment.

“We need places for decompression right now,” she says. “We need to slow down.”

Originally from Philadelphia, Stigora has been creating large reclaimed-wood installations for more than a decade. (If you missed her previous local installation, at Method Gallery, you aren’t alone — it opened the first weekend of March, 2020. Oof.) She told me that when she first visited Seattle in 2013, she was astounded by the driftwood she saw washed up on coastlines, and the forts that locals build from it. “The art that I want to make already exists here on the beaches,” she recalled thinking. “People from here are just accustomed to it,” she marveled. “But for me, it was like walking into Where the Wild Things Are.” In 2015, she moved here. 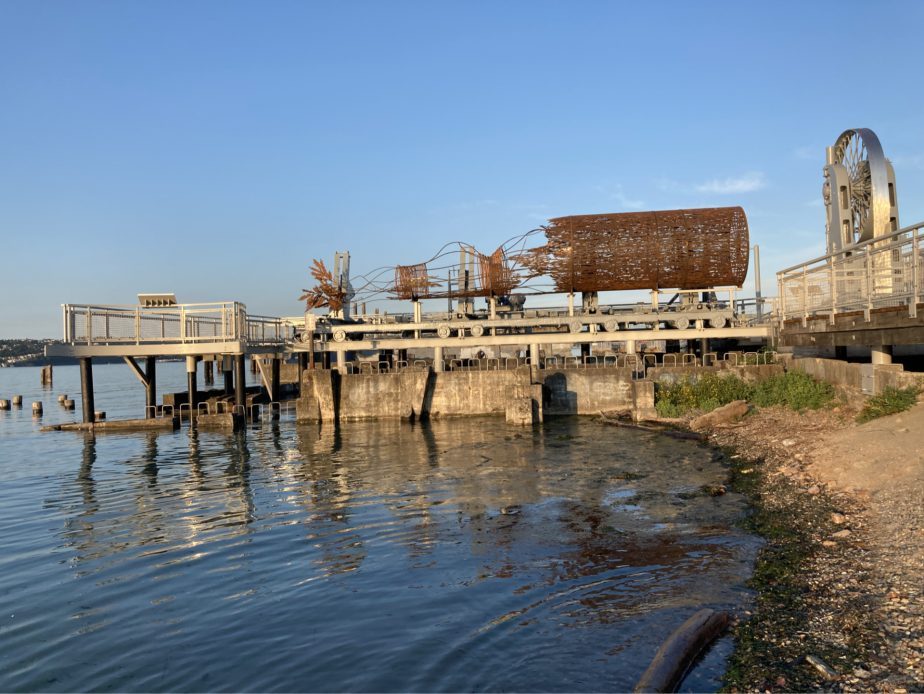 ‘Ghost Log,’ by Seattle artist Mary Coss, is installed next to the historic head saw from the Dickman Lumber Mill on Ruston Way in Tacoma. She has added new audio components to the project. (Mary Coss)

‘Ghost Log,’ by Seattle artist Mary Coss, is installed next to the historic head saw from the Dickman Lumber Mill on Ruston Way in Tacoma. She has added new audio components to the project. (Mary Coss)

Looking at the amassed driftwood, Stigora told me she has been thinking about the timeline of these trees, and their journey through the watershed. “These all started as seeds,” she noted. Over decades, they grew huge. Some fell over naturally, some were cut and chained for various human needs, some had second lives as docks or log booms. They all ended up rolling around in Puget Sound for untold days, and now will have another existence as art. And after the show is over, most of the wood will be used for restoration of beach habitats around Puget Sound.

Another component of “Salvage” still in progress is an ambient audio track (by Rachael Fasano) that will pair the low rumbling of the dredging equipment used in retrieving the driftwood with a celestial vocal loop. As a confirmed log lady who has written about Seattle’s wealth of log art and tree sculptures before, I’m surprised and pleased to report that this is one of the season’s three cool audio projects inspired by logs.

Back in May, 2021, I wrote about Seattle artist Mary Coss and her own big timber project, on the Tacoma Waterfront. She created and installed a huge steel log sculpture at the historic site of the Dickman Lumber Mill, which specialized in outsized logs, and which sits on the ancestral land of the Puyallup Tribe. Now, Coss has released two audio companions for the piece — a richly layered 13-minute sound collage called “Ghost Timbre” and a seven-episode podcast called “Timber Lines.” Both are enlightening and beautifully produced.

Coss speaks with other elders of the Puyallup Tribe, as well as former mill workers, one of whom explains that in a mill, “all the machines have their own sounds … their own rhythm.” He notes that he used to sing sea shanties while working, “because that way you don’t miss a beat.” I recommend listening to this short piece on a walk through a forested park, preferably next to a body of water.

The “Timber Lines” podcast digs deeper, with each episode dedicated to a different aspect of the “Ghost Log” site’s history, from ancestral origins to housing the last standing and longest operating lumber mill (at one time there were 70) in Tacoma. Here too, Coss uses environmental sounds to marvelous effect — as well as original music by her daughter, jazz composer Roxy Coss. 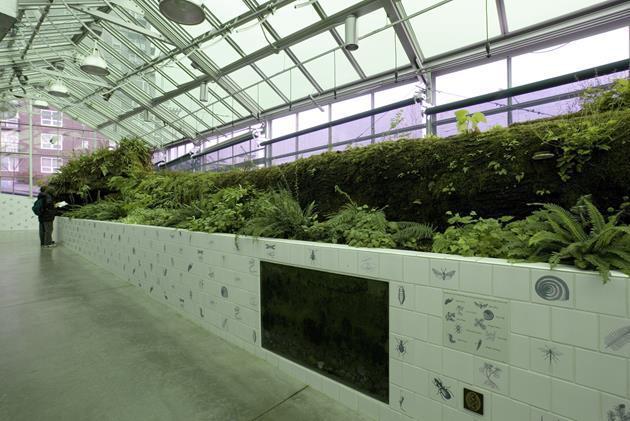 In the Neukom Vivarium at Olympic Sculpture Park, Mark Dion's art-nature experiment shows how a dead tree has many lives. (Paul Macapia)

In the Neukom Vivarium at Olympic Sculpture Park, Mark Dion's art-nature experiment shows how a dead tree has many lives. (Paul Macapia)

If all this timber talk has you in the mood for log, you’re in luck.

Seattle contemporary dance company Whim W’Him is doing two free pop-up performances this weekend, one at Pier 62 on the Waterfront (Aug. 27, 7:45 p.m.) and another at Olympic Sculpture Park (Aug. 30, 7:45 p.m.). Which means you can experience choreography in the company of logs. Stay with me...

There’s no shortage of logs at the waterfront, obviously, and at Olympic Sculpture Park you’ll find them in the form of Mark di Suvero’s sculpture, Bunyon’s Chess, as well as Mark Dion’s Neukom Vivarium, where a fallen tree lives on as a nurse log, creating its own ecosystem of ferns and bugs. (Something about the log encased in glass like Sleeping Beauty takes on a new poignancy with this week’s news that Seattle has lost 255 acres of tree canopy since 2016.)

At Smith and Vallee Gallery in Edison, Washington, Becky Fletcher and Aaron Loveitt present a dual show (through Aug. 28) featuring a thicket of logs — the former with oil paintings of driftwood and the latter with a large salvaged-steel sculpture called “Notch,” modeled on an existing old-growth cedar stump.

In the upcoming group show Carbon (Sept. 8 - Oct. 15), at Vestibule Gallery in Ballard, watch for Seattle artist Vanessa Lanza’s salvaged-log prints, each of which tells a tree’s story as unique as a fingerprint.

Things to do in Seattle this October

Four film festivals (queer, Latino, doc, and horror), plus romantic opera, Sorkin's take on To Kill a Mockingbird, a Chihuly tour, and much more.