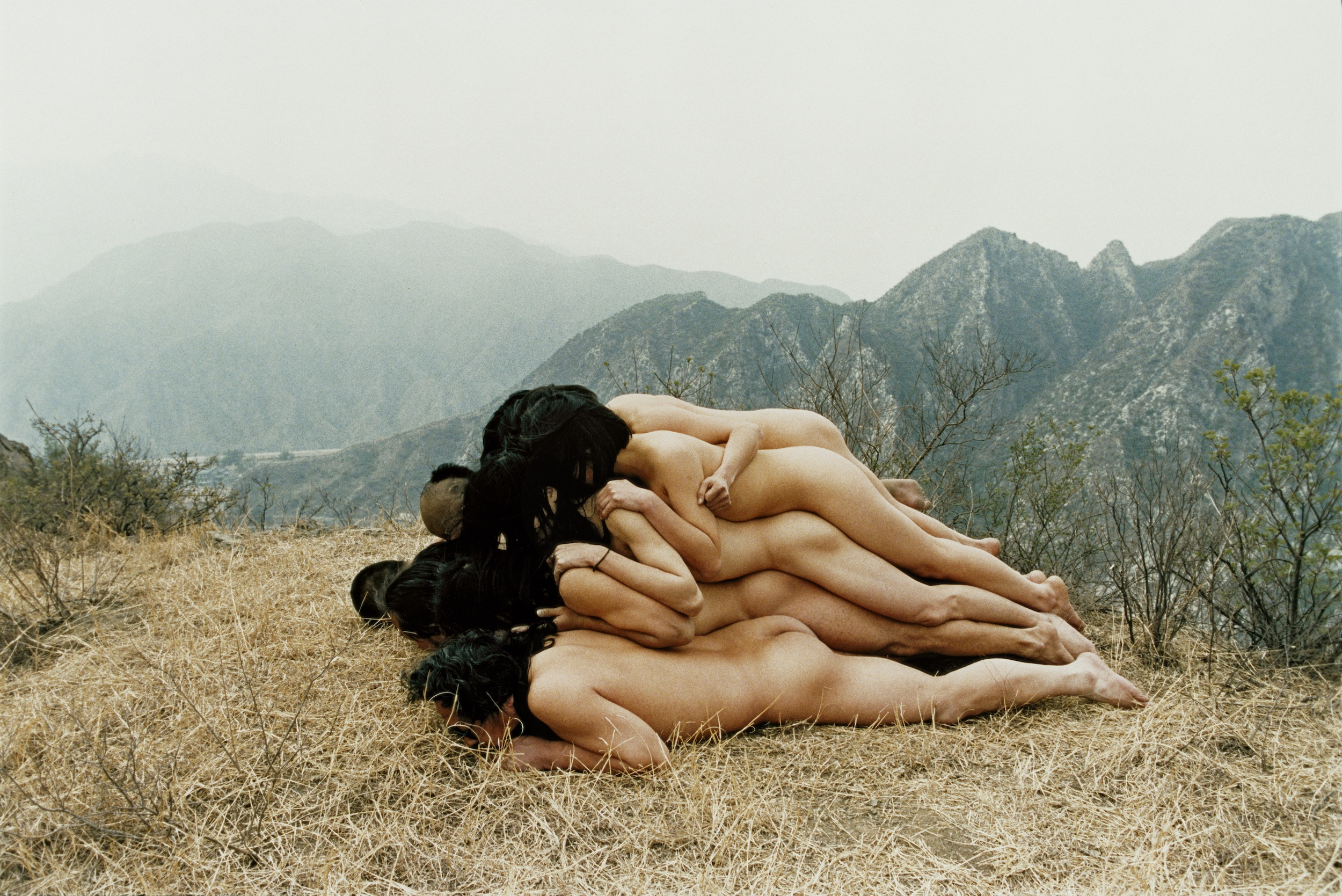 The human relationship with the natural landscape is complicated. We are forever trying to get our bodies closer to nature, whether by painting it, taking selfies in it, hiking around in it or insisting on homes with a view. We are awed by untouched wilderness, yet fill it with our detritus. We want to get “back to the Earth” and bend it to our will.

The human-landscape relationship comes into sharp relief in Beyond the Mountain: Contemporary Chinese Artists on Contemporary Forms, a compact but compelling new show of six artists at Seattle Asian Art Museum. The show’s title references Chinese artist Zhang Huan’s 1995 photograph “To Add One Meter to an Anonymous Mountain,” a striking and disorienting piece in which several naked people lie on top of each other at the summit of Mount Miaofengshan.

The horizontal strata of their bodies echo the vertical ridges of a mountain range in the distance. But their flesh looks alarmingly soft against the scrub grass, like some strange snail that has lost its shell. Their alignment — dark-haired heads blurring together into one black line — feels more architectural than sexual. What on earth are they doing up there?

They are making a mountain taller with human intervention, and in the process making an entirely new mountain. On a recent press tour, curator Foong Ping explained that the artist based the photo (and the performance it captured) on a saying: “Beyond the mountain, there are higher mountains yet,” which points to the impetus and folly of trying to best nature. The subjects’ nudity (“his idiom is naked people,” Foong noted) reflects our desire to be at one with nature, while at the same time being dwarfed by it.

Nearby, the rhythmic whoosh of ocean waves beckons visitors into a small, curtained room. Step inside for my favorite section of the show: two single-channel videos that cascade like scrolls from ceiling to floor. Projected on opposite walls in the calm, darkened space, these are Yang Yongliang’s “The Departure” and “The Return” (both from 2019).

Sit for a spell as the black-and-white images emerge slowly from the mist. Squint and you’ll start to see jagged mountains appear — but look even closer, and you’ll notice that these monoliths are made from so many skyscrapers. A rushing waterfall proves to be a highway packed with cars. Those trees? Construction cranes. The artist created these astonishing works by combining thousands of photographs and videos from megacities, thereby painting a natural landscape from man-made ambition. 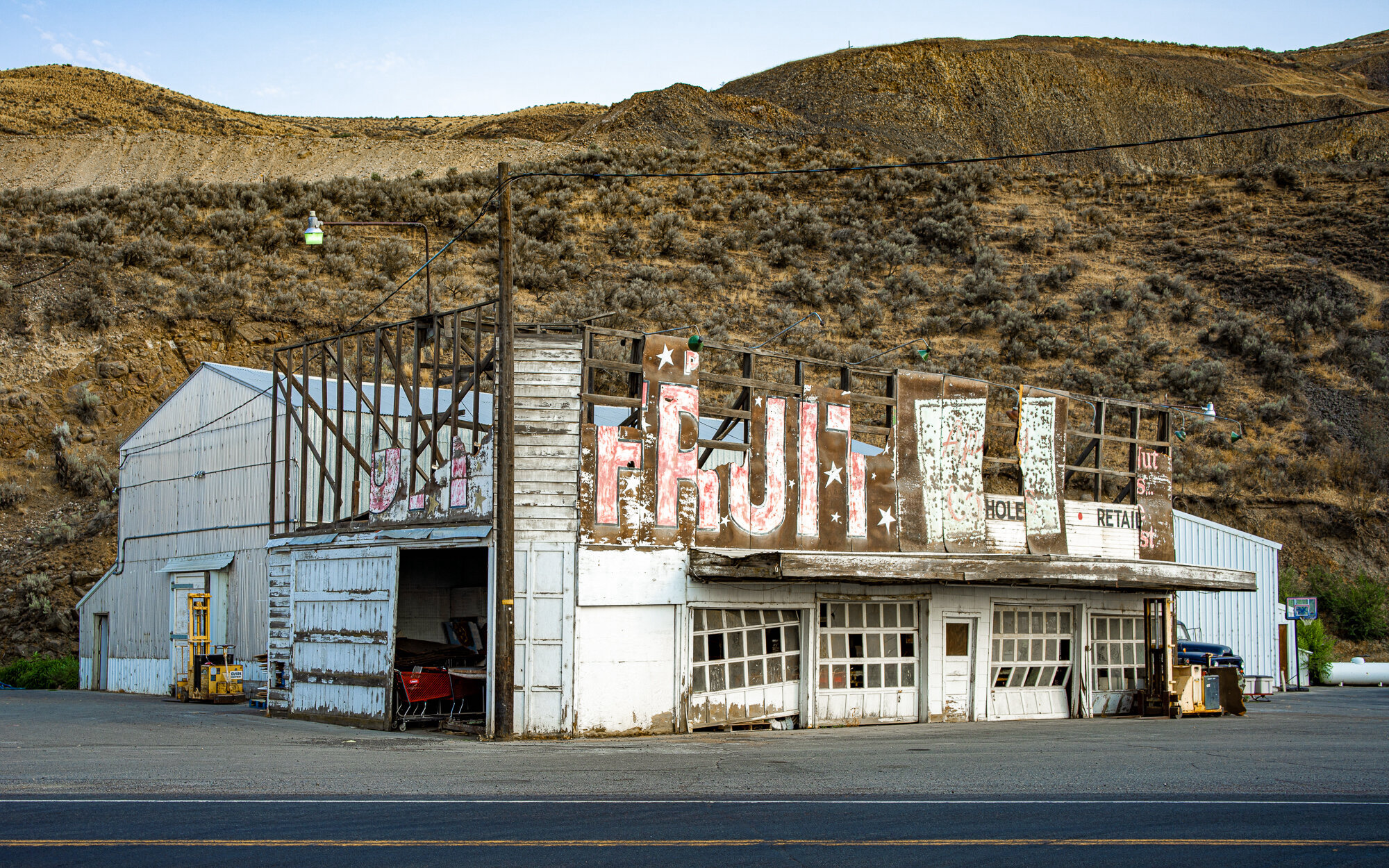 The impulse to make our mark on the landscape is explored in another new local show, at the National Nordic Museum. Across the West and Toward the North: Norwegian and American Landscape Photography (Aug. 6-Nov. 27) showcases 19th and early 20th century photographs from two nations — both of which used landscape imagery as a way of reflecting and reinforcing a national identity.

The effort to explore, survey, map, develop (and exploit) the wilderness was kicking into high gear just as advances in photography were making it easier to capture these places on film and entice others out into the wild. In several of the images here, men wearing hats and waistcoats stand on a glacier or under a hanging rock with arms akimbo — as if to say, “Mine!” (Stay tuned for a concurrent September program called Don’t Go North!, presented by the Indigenous Corps of Discovery, a response and retelling of this historical period from a Native perspective.)

Some of the scenes in Across the West and Toward the North are romantic images of pure, majestic nature — precursors to those seen in Ansel Adams’ work, which is still on view at MOHAI. Ansel Adams: Masterworks (through Sept. 5) features his hand-selected “Museum Set” of 48 photographs from the midcentury. With eye-popping shots of the Grand Tetons and Snake River, rock formations in Death Valley and the exquisite geometry of an outstretched fern at Mount Rainier, this collection speaks to our undying awe of natural landscapes, even as we can’t seem to stop messing them up with our presence.

You won’t find a fern in sight in The Other Washington State (Aug. 4-27). This collection of Eastern Washington landscapes by Northwest photographer Angshuman Sarkar opens today at Gallery 110 in the art-filled Tashiro Kaplan Building. Sarkar’s work showcases not just the beauty of wide yellow plains, but agrarian landscapes: a roadside fruit stand, industrial farm equipment, trucks awaiting produce. In other words, “The ecosystem of human endeavor, engineering ingenuity, hard work and infrastructure,” he writes in his artistic statement. These landscapes may be less celebrated in fine art photography, he argues, but are just as integral to our national (and state) identity. 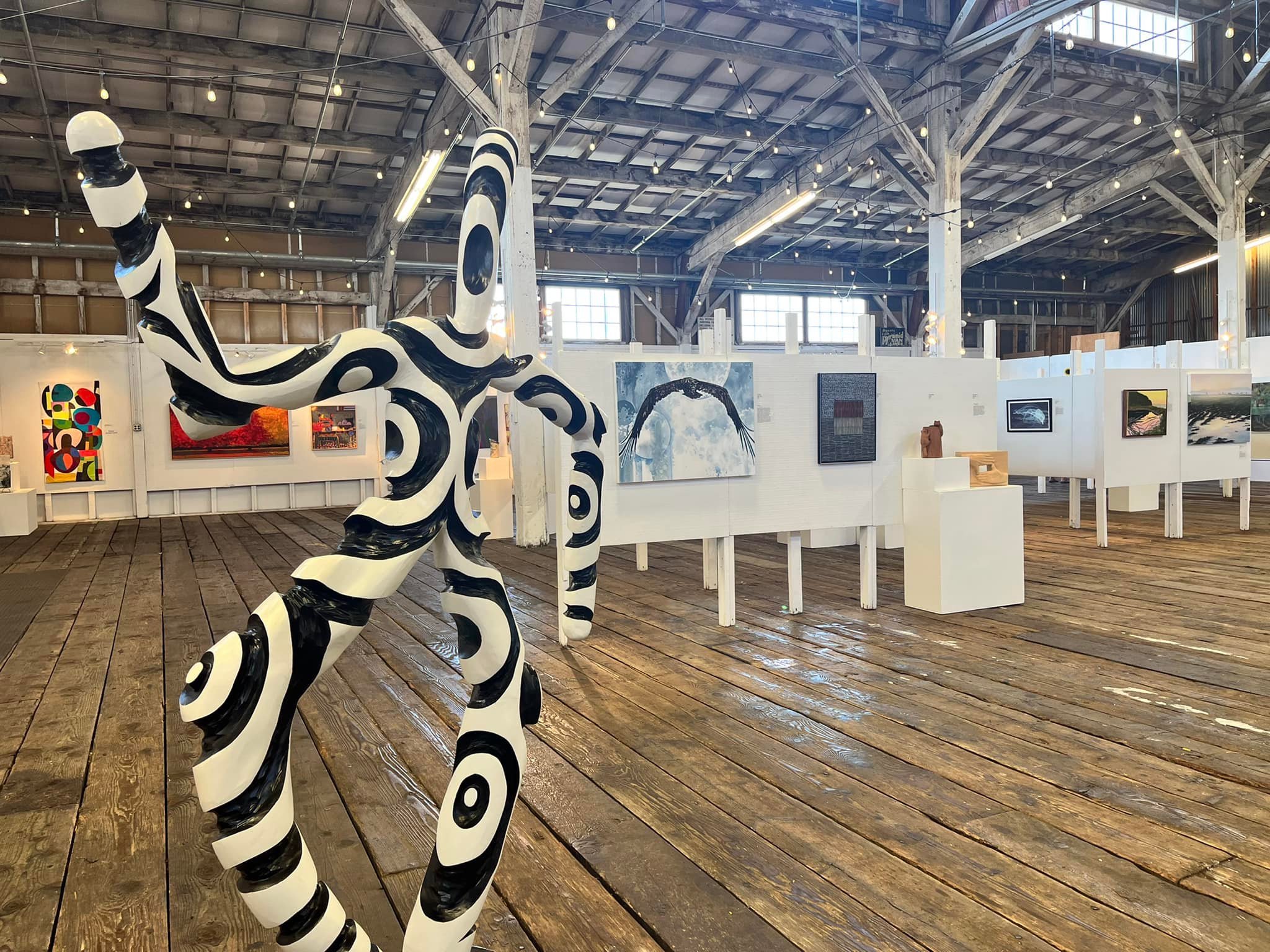 Somehow, we’ve already arrived at the last (official) month of summer, so if you haven’t yet checked out our collection of Things to Do in Seattle this August, open your calendar and take a peek.

The Mighty Tieton arts space near Yakima is launching its popular 10x10x10xTieton show (opening reception Aug. 6, 11 a.m. - 4 p.m.). The juried exhibit features works from all over in all mediums — and all within the 10 x 10 x 10-inch size limit. (While there, don’t miss Seattle sound sculptor Trimpin’s incredible installations on view next door to the gallery.)