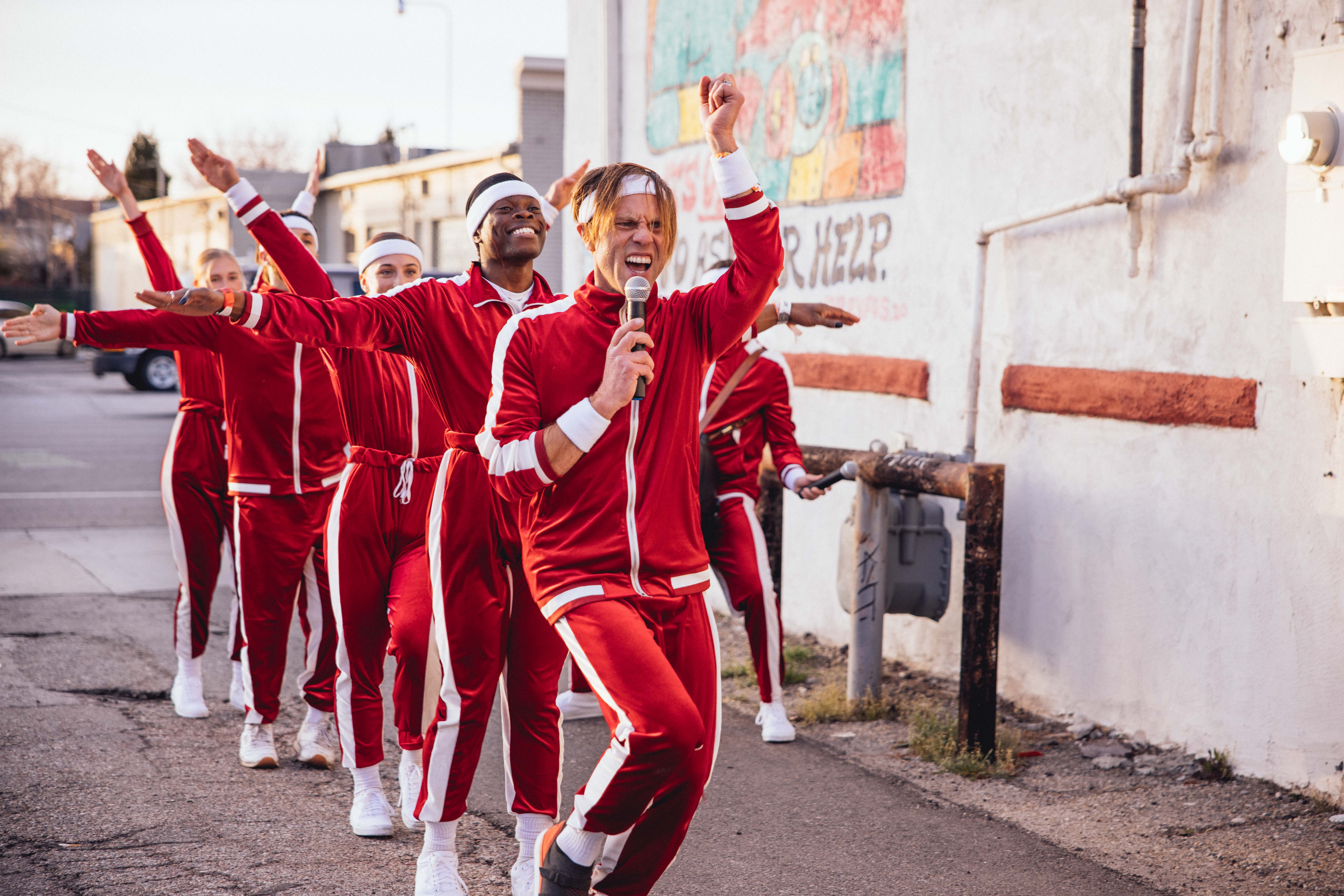 A previous iteration of the interactive performance "Dance is Cringe," by Boise-based dance company LED. (Photo courtesy of Daniel Olson/LED)

Hamilton needs no introduction. The 2015 musical about Founding Father Alexander Hamilton, written and composed by creative polymath Lin-Manuel Miranda in a now-famous blend of hip-hop, Broadway, jazz and R&B, has grown into a blockbuster among blockbusters. It’s got it all: Tony, Grammy and Olivier awards, a Pulitzer, plus legions of fans and enduring popularity to boot. So much so that tickets can be hard to get by, or just plain expensive: Admission to the Broadway show’s Seattle visit runs upwards of $59. As with the show’s 2018 run, the producers have devised a lottery system. Entrants can win $10 tickets — 40 of which are made available every performance — if they register and sign up through the app. Winners will be announced every Thursday. 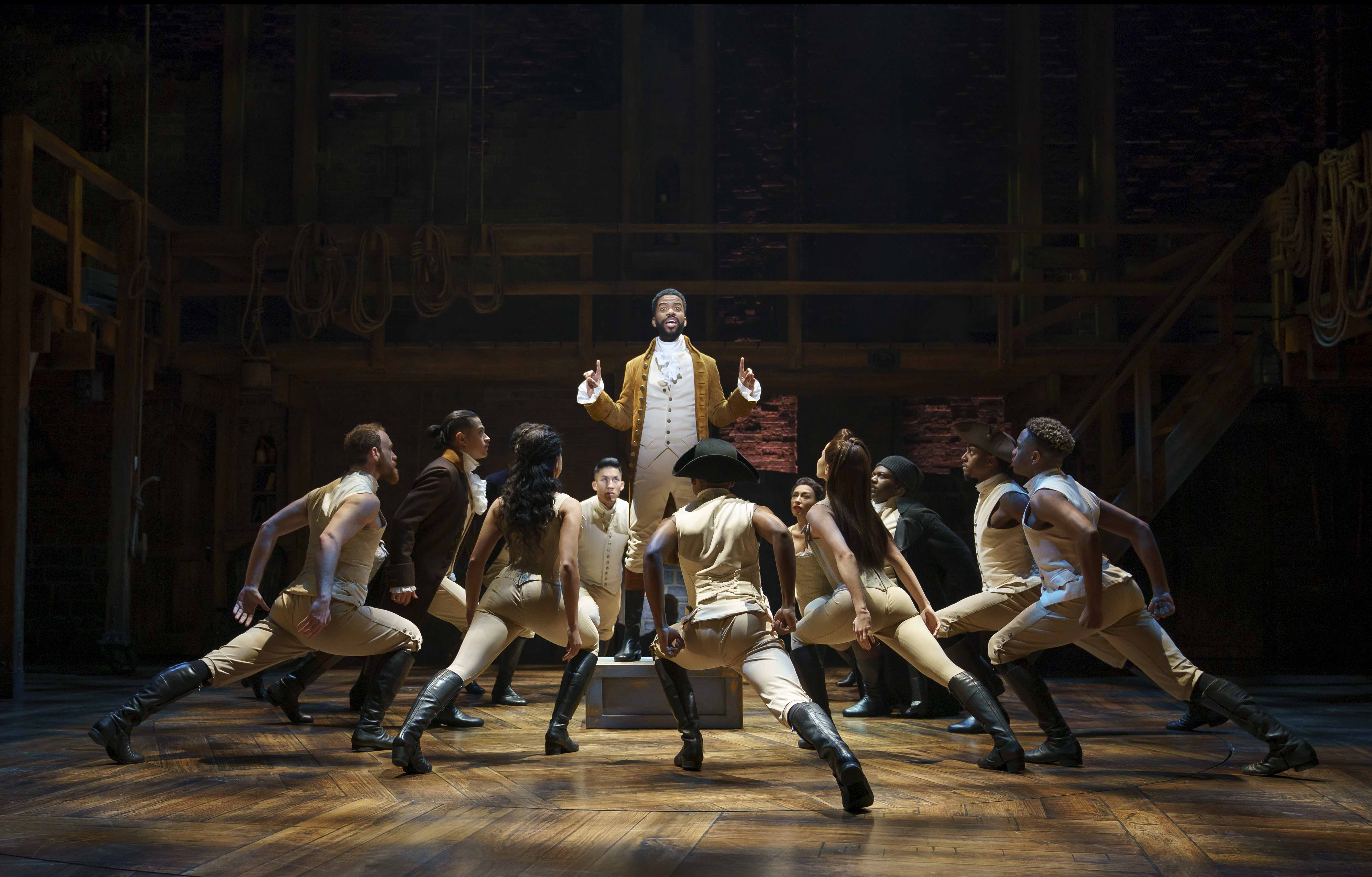 The musical ‘Hamilton’ has grown into a blockbuster phenomenon. (Joan Marcus)

The musical ‘Hamilton’ has grown into a blockbuster phenomenon. (Joan Marcus)

In a dim room at the Seattle Asian Art Museum, two monochrome mountains emerge from the fog on tall video screens hung vertically like classic Chinese ink paintings. “You could say this is a landscape painting which our ancestors in China would have never imagined possible,” said the museum’s Chinese art curator Foong Ping during a recent press tour. That’s because these are digital collages, an optical trick using photos and videos of Asia’s megacities (cranes appear to be trees, skyscrapers become cragged rocks) by artist Yang Yongliang. It’s just one work in Beyond the Mountain: Contemporary Chinese Artists on the Classical Forms, named after the Chinese saying “Beyond the mountain, there are higher mountains yet,” a reference to the hubris of challenging the natural world. As this compact but excellent new show potently suggests, the mountains will rise, the waves will crash ashore and the birds will flap their wings long after we’re gone. 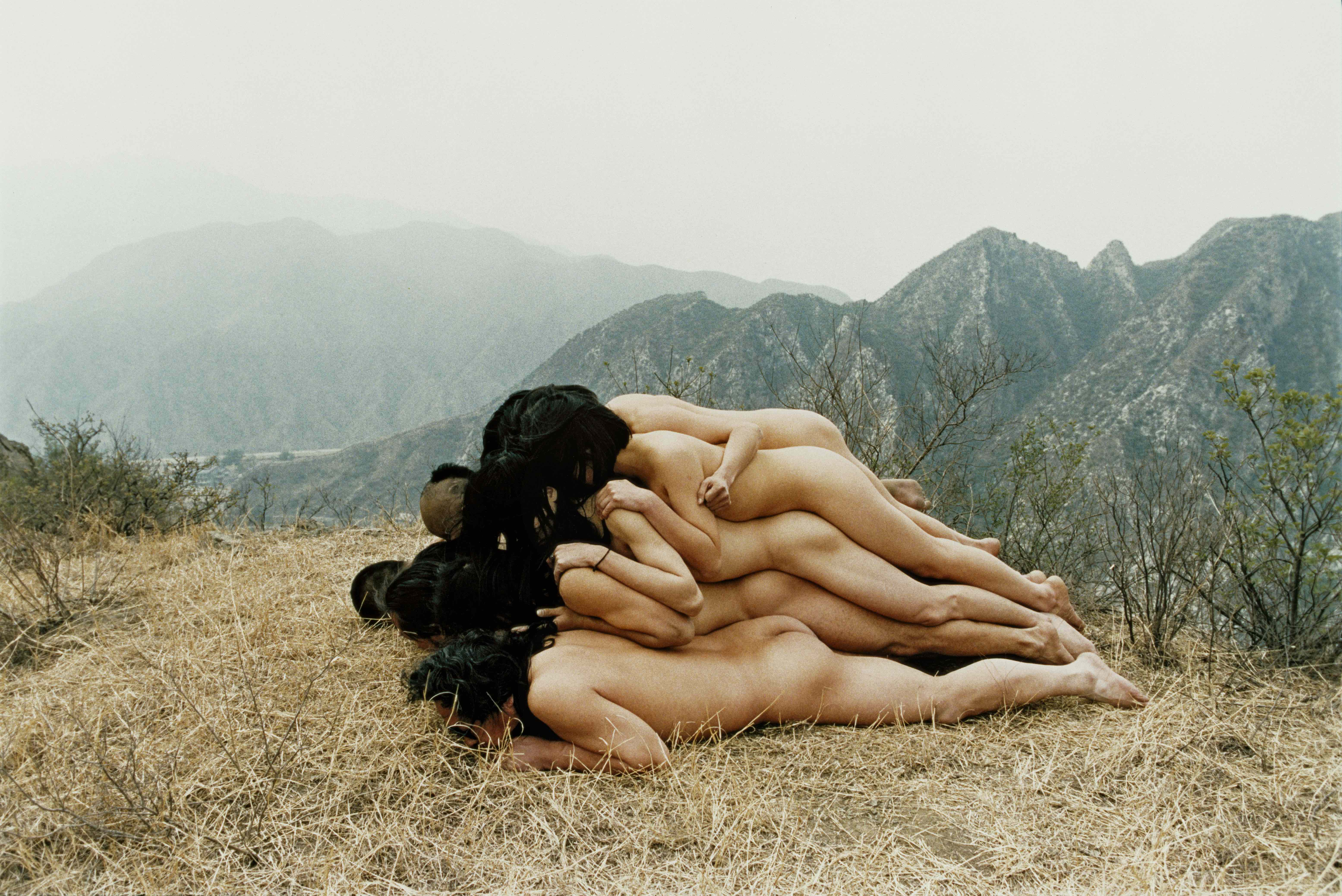 Summer in Seattle doesn’t need enhancing, but music is a nice bonus to the gorgeous scenery (and vice versa). At the Olympic Sculpture Park, enjoy picture-perfect views of Elliott Bay during the weekly “Summer at SAM” events (a series of free outdoor events courtesy of the Seattle Art Museum). This month, watch for Tomo Nakayama and Lisa Prank (Aug. 4) and the “gunk pop” band Black Ends (Aug. 11); both evenings will also feature collaborative art-making sessions.

Visitors to Capitol Hill’s Volunteer Park can gawk at the Space Needle and a brand-new amphitheater, the stage for a free “Summer Series” of concerts and performances. Up this month: Latin jazz by Jovino Santos Neto and Raul Midon (Aug. 4) and Women in Song: Star Anna, Alessandra Rose, Eugenie Jones, V. Contreras (Aug. 11).

Opera is known for drama and unhappy endings — but it doesn’t have to be this way, as proven by Gaetano Donizetti’s 1832 The Elixir of Love. This musical romantic comedy, among the most-performed operas worldwide, is a true crowd-pleaser with a plot that wouldn’t look out of place in a Netflix rom-com: She’s the owner of a hotel, he’s the waiter. How will he win her over? The Seattle Opera is ready to win over audiences with its rendition set in the 1940s, the kickoff to its 2022-2023 season.

Art from the African diaspora

Walking into the house located on Seattle’s 911 24th Ave. can be a bit of a magical experience: Behind each door awaits something new and unexpected — a large-scale sculpture, an immersive installation, a galaxy of paintings. This is, of course, not a magic trick but the work of curator Elisheba Johnson, who with Inye Wokoma, Rachel Kessler and Jill Freidberg founded the Black arts and community space Wa Na Wari in 2019.

On view this August and September is the work of four international artists: the German-born, London-based Nigerian artist Joke Amusan, who examines the concept of “Blackness” through an immersive installation made from the overlooked material hessian (a burlap-like fabric made from jute); the Mali-born Maury Diakite who plays and paints with watercolors and hexagons; the Barbadian artist and writer Katherine Kennedy, who discusses the exotification of the Caribbean through a mesmerizing but unsettling video; and French Guyana-based Tabita Rezaire, who has installed an Afrofuturist video dome featuring a “constellation of Moon stories.” 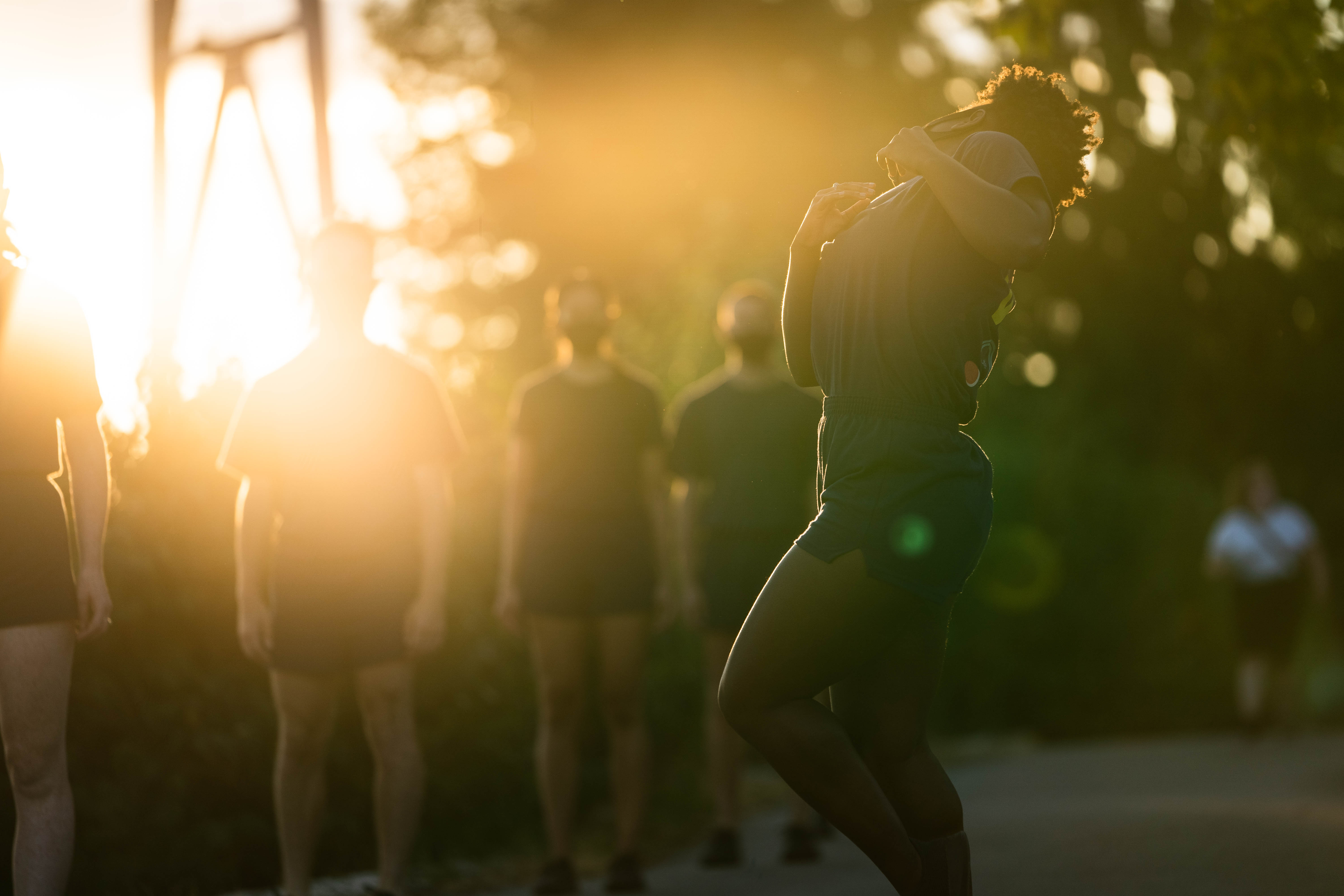 Dancer Ashley Green performs during a Whim W'Him pop-up performance of “The Way It Is.” (Courtesy of Whim W'Him/Stefano Altamura)

Dancer Ashley Green performs during a Whim W'Him pop-up performance of “The Way It Is.” (Courtesy of Whim W'Him/Stefano Altamura)

August’s motto? If you ask the Volunteer Park Trust it’s Dance, Dance, Dance! The group is putting on a mixed dance bill of that name at the new Volunteer Park amphitheater (Aug. 11, 7 p.m.). On the brand-new stage: Seattle contemporary dance group Whim W’Him, Pacific Northwest Ballet’s Lucien Postlewaite, Elizabeth Murphy and Amanda Morgan (with The Seattle Project). Bring a blanket and picnic or sample from the food trucks, and make sure to stop by at 5:30 p.m. for a pre-performance dance fitness class by Dance Church (5:30 - 6:30 p.m., registration required).

In Jimi Hendrix Park, Morgan's The Seattle Project will present part 3 of In Their Stories You Will Find Them, a series of public-park dance performances that “explore themes of folklore with contemporary perspectives.” (Aug. 5, 5 p.m.)

Dance Is Cringe, an entertaining show from Boise-based dance company LED (Aug. 26, 8 p.m.) at Yaw Theater in Georgetown isn’t entirely outdoors (the show’s “aperitif” is en plein air, the rest will take place in a fog-machine and disco-light filled space) but it still deserves a mention. Depending on your definition of cringe — capital D “Dance” itself or the comedy and participation this show promises — this show, featuring sweatsuit attire and headbands, will either irk you or set you free.

To top off the month with a 100% outdoors experience: Choreographer and Spectrum dancer Nia-Amina Minor will present Black Collectivity in the Northwest Courtyard of Seattle Center as part of the free Artists at the Center series. (Aug. 28, 3 p.m.)

The art of representation

Figurative painting — the art of transmitting visible reality onto canvas or paper — has been around (and beloved) for centuries. But in our postmodern age, the art form has gotten a bit of a bad rep as predictable and passé. A new group exhibit at Pioneer Square Gallery Figure Ground (and, concurrently, at Sugarlift in New York) is hoping to show that representational painting has not reached its last stop on the art history train. Beyond Description, curated by artists Eric Elliott (Seattle) and Jordan Wolfson (Boulder), features work by artists from around the country and world and aims to show that while these painters may be showcasing bodies, fruit, still lives, florals and interior scenes, they do not shy away from experimentation. 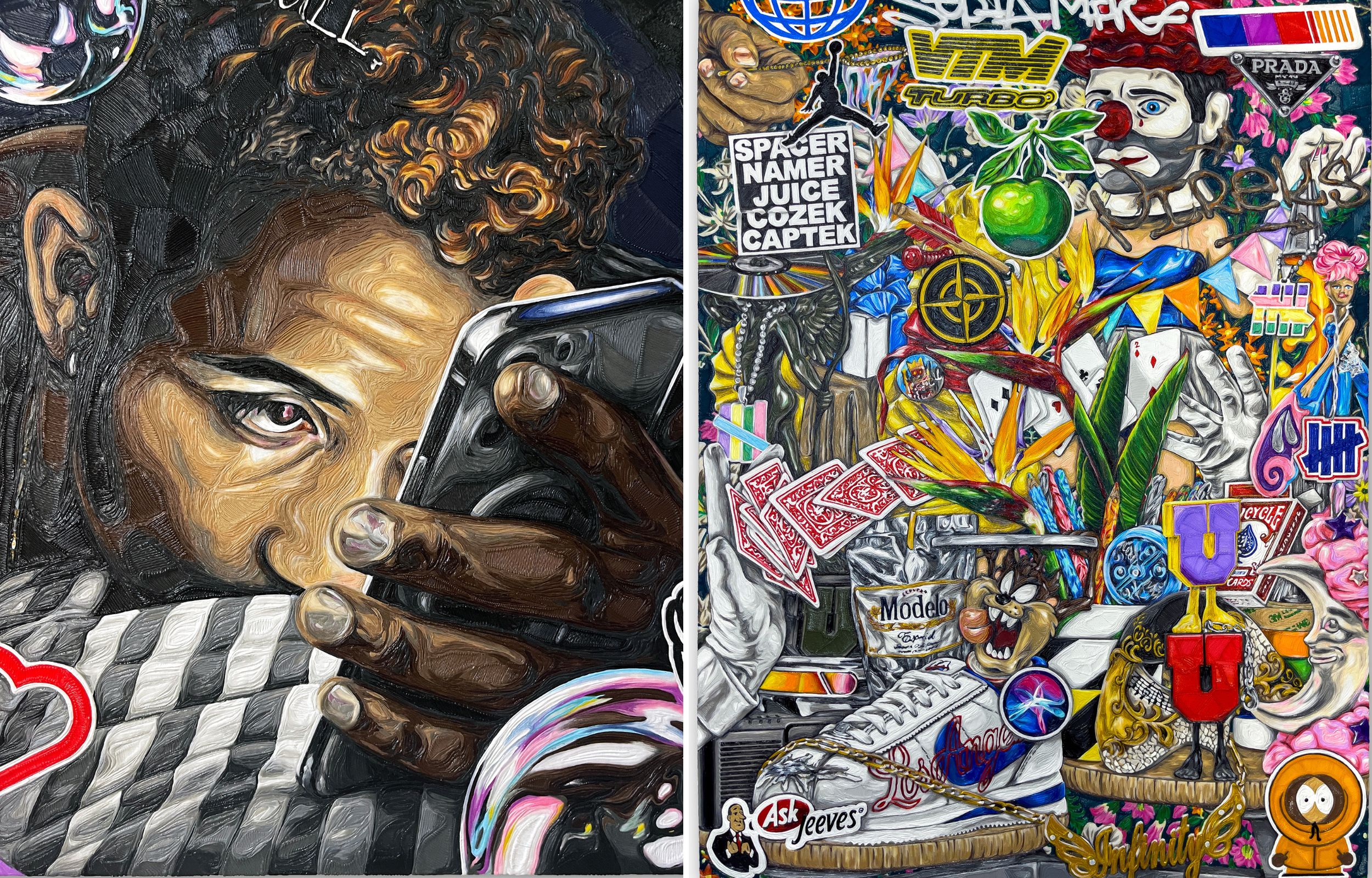 Consumerism at the Seattle Art Museum

In the summer of 2018, Cornish grad Anthony White burst onto the local art scene with his “hot glued” plastic paintings of selfie culture and American consumerism. In rapid-fire, he had sold-out shows, a Seattle Art Fair debut and gallery representation (by the prestigious Greg Kucera). White’s rise has not slowed: The Frye Art Museum and Sacramento’s Crocker Art Museum have purchased the now 27-year-old artist’s work, and last year, he won the Seattle Art Museum’s Betty Bowen Award, which comes with a solo show opening this month. In Anthony White: Limited Liability, White leans into the literal and metaphorical horror vacui of the internet age. “This body of work,” he wrote in an email, “… continues to step over the line that exists between reality and fantasy. It’s that disorienting place we find ourselves after riding off into the sunset, doom-scrolling a newsfeed rabbit hole.” 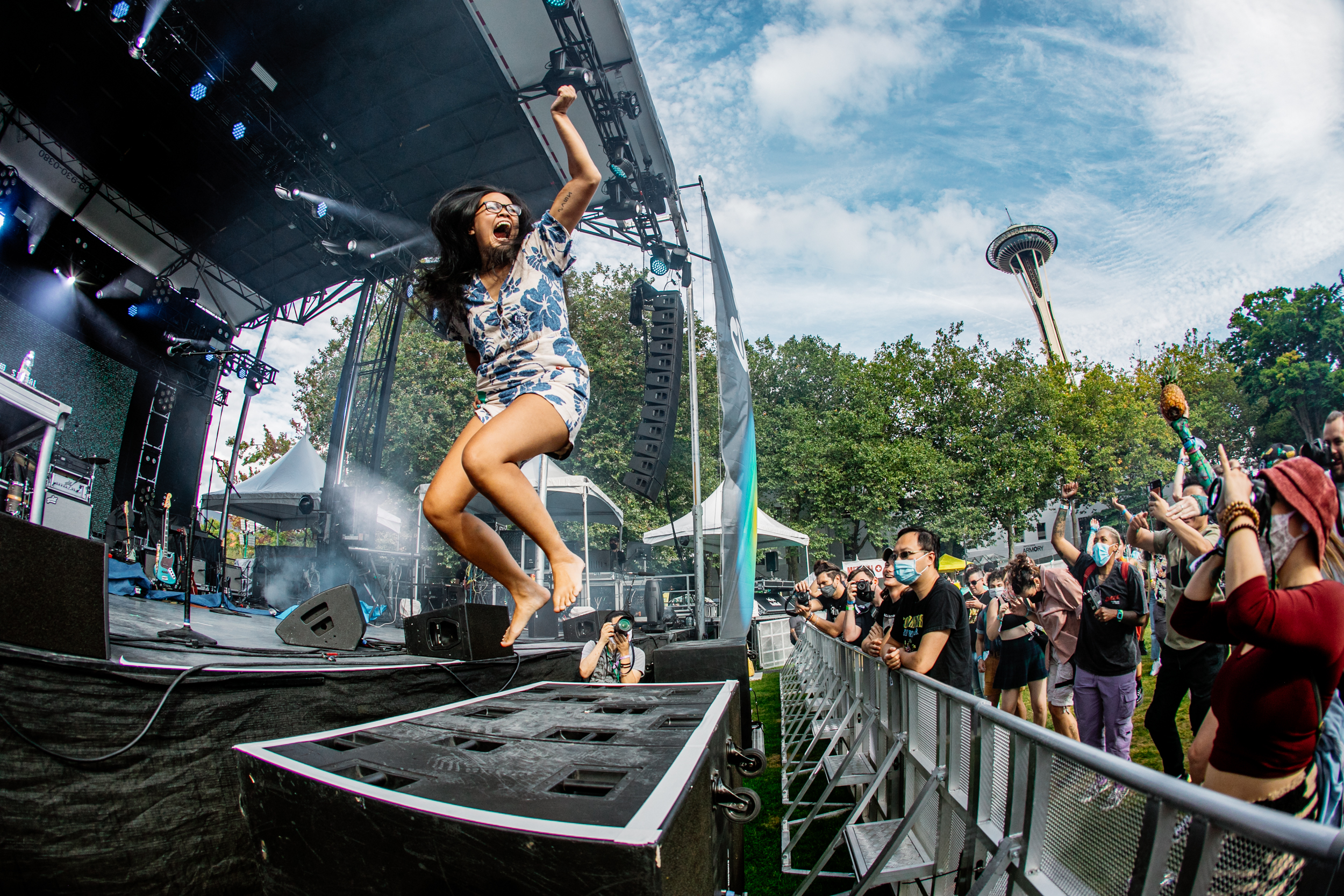 Now that we’ve swung between the June-uary gloom and the recent excessive heat,  August should bring some sweet-spot temps — perfect for the slew of outdoor arts and music festivals.

Synonymous with Seattle summer in Seattle is the Seafair Weekend Festival (Aug. 5-7). But if you prefer to get away from the deafening Blue Angels,  consider a seaside arts getaway: The Anacortes Arts Festival (Aug. 5-7), which lines main street all the way to the waterfront, features music stages, artisan wares, live art demonstrations, a fine art exhibit on the dock, plus beer and wine gardens and food trucks.

If you’re staying in Seattle for the weekend, there is plenty of art to go around. In South Lake Union, local faves the Moondoggies, husband and wife duo Smokey Brights and alt-soul band I///U are turning up for the SLU Block Party (Aug. 5, 5.30 p.m.) which is promising to be “bigger and better than ever.” In Pioneer Square, art maven Tariqa Waters is hosting an ’80s-themed block party featuring DJs, music, a dance performance and interactive art activities (Aug. 6, 1 - 8 p.m.). And at Seattle Center, the now-quinquagenarian radio station KEXP is celebrating its 50th anniversary with a free summer bash featuring performances including Sons of Kemet, Thao, !!! (Chk Chk Chk) and Tomo Nakayama (Aug. 6, 12 p.m. - 7 p.m.).

Also at Seattle Center, on the following weekend: the second edition of the Day In Day Out Festival  (Aug. 12 - 14), bringing a solid lineup of national bands (The National, Mitski, Soccer Mommy) and local faves like afrofuturist rappers Shabazz Palaces and Seattle-born surf rocker band La Luz.

That same weekend, look out for the free Madaraka Festival at Pier 62 on the waterfront in downtown Seattle (Aug. 13-14, 2 - 10 p.m.) celebrating African and African American culture with live musical performances from, among others, Nigerian singer D’Banj, the Djeliyah Band and Seattle’s Rell Be Free, plus African food and art. And during the free Othello Park International Festival (Aug. 14, 12 - 6 p.m.), there will be music performances, interactive kids’ games, art and design stands.

The following weekend, Jefferson Park’s the place to be for BAZZOOKAFEST, a free music and film festival (plus, ball) with an all-BIPOC lineup, including Supercoze and Bruit XO and drag by Beautyboiz (Aug. 19 - 20). And last, but not least: the C-ID Block Party will spread out across the Chinatown-International District neighborhood (Aug. 20, 3 - 9 p.m.) with a food walk, art shows and music performances (keep an eye out for the lineup later this month).