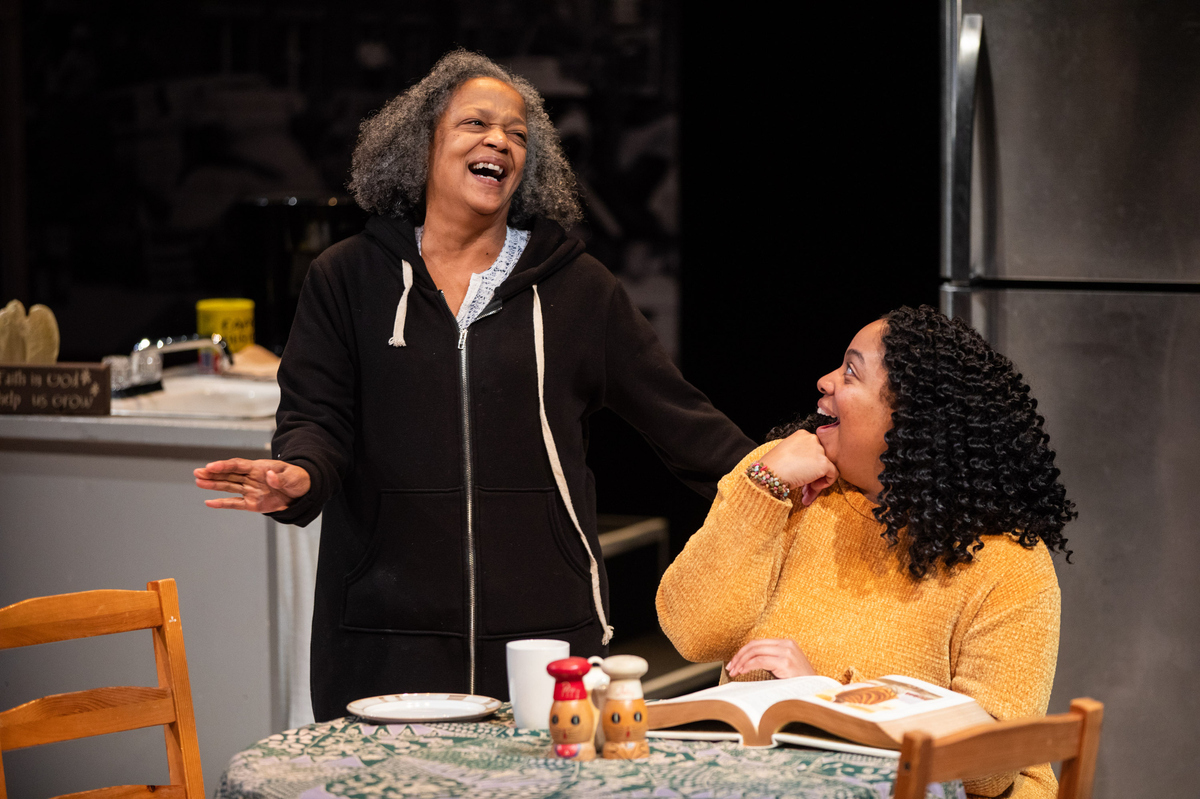 Cathleen Riddley (left) as Odessa and Maiya Reaves as Margaret during a recent rehearsal for “The Amen Corner” at the Langston Hughes Performing Arts Institute on Wednesday, Nov. 2, 2022. This staging of the 1954 play by James Baldwin is directed by Reggie D. White for The Williams Project. (Amanda Snyder/Crosscut)

Writer and civil rights activist James Baldwin often pointed to the Black church as a major influence on his life and work.

“Church was a place where Black people could speak their pain or their rage, free of the endless and violent scrutiny of whiteness,” he wrote. “It was a place we could be ourselves; a place to be joyful and a place to mourn.”

Baldwin in fact set his first play, 1954’s The Amen Corner, in a small Pentecostal church in Harlem — much like the one he attended as a child, where he was encouraged to become a boy preacher (a saga he fictionalized in his first novel, Go Tell It on the Mountain).

Now his gospel-music-infused drama is getting its overdue Seattle premiere in a former house of worship that was erected in the Central District in 1915 as a Jewish synagogue. Today the building houses LANGSTON — aka the Langston Hughes Performing Arts Institute, currently celebrating 50 years in the space — named for another groundbreaking Black author.

“When I came in April to do some auditions and looked at the space, I thought, this is perfect,” says Reggie D. White, the New York actor/director (recently seen in The Inheritance on Broadway) who is staging The Amen Corner (Nov. 3-20) for Seattle’s The Williams Project. “The way the set is built and the architecture of the auditorium, it feels like the audience is in the congregation. It’s almost immersive in that way.”

On a recent rainy afternoon, the lanky, animated White and the show’s nine-member cast were immersed in preparing the production, with Williams Project artistic director Ryan Guzzo Purcell looking on and lending support.

As is common in Williams Project productions, the cast members in this show hail from around the country. Several longtime Seattle performers are involved, including Felicia Loud (as Sister Boxer) and Malcolm J. West (as Brother Davis). And the musical director leading the singer/actors in such vintage gospel tunes as “What a Mighty God We Serve” and “Ride On, King Jesus” is Aaron M. Davis Norman, a frequent Williams Project collaborator and musician/educator who teaches at Cornish College of the Arts. 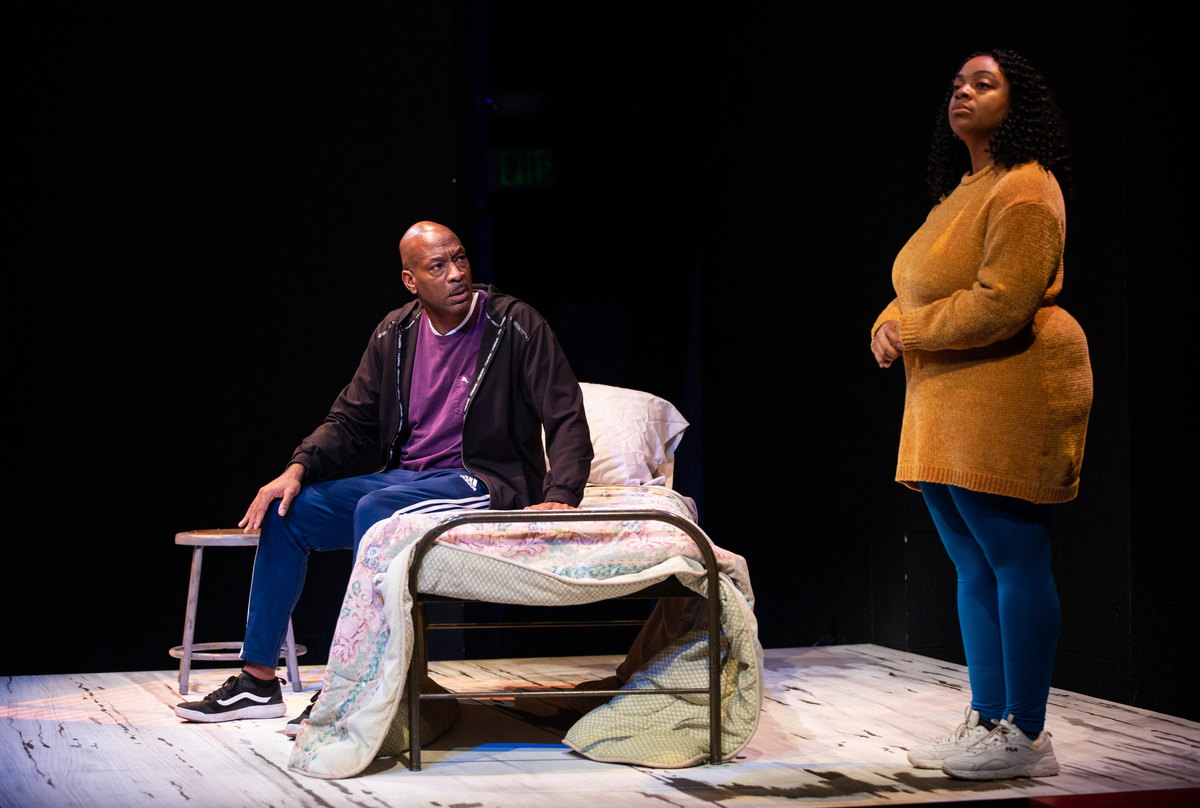 Adrian Roberts as Luke and Maiya Reaves as Margaret in a recent rehearsal for James Baldwin's “The Amen Corner,” receiving its first local staging. (Amanda Snyder/Crosscut)

Adrian Roberts as Luke and Maiya Reaves as Margaret in a recent rehearsal for James Baldwin's “The Amen Corner,” receiving its first local staging. (Amanda Snyder/Crosscut)

During a rehearsal, the sounds of a vibrant gospel choir ring through the room, with Norman accompanying the actors on piano. Such numbers capture the ambience of the church where the dynamic, fire-and-brimstone preacher Sister Margaret (a central character based partly on Baldwin’s mother) and her rousing chorus hold forth.

“Some of you say, ‘Ain’t no harm in reading the funny papers,’” Margaret tells her flock during a typically blazing sermon. “But children, yes, there’s harm in it. While you reading them funny papers, your mind ain’t on the Lord. And if your mind ain’t stayed on Him, every hour of the day, Satan’s going to cause you to fall. Amen!”

It was in 1954 that the 30-year-old Baldwin, soon after Go Tell It on the Mountain was published to rave reviews, decided to try his hand at playwriting.

In an introduction to the published script of The Amen Corner (the title refers to the section of a church where the most fervent, vocal worshippers congregate), Baldwin claimed that “out of the ritual of the church, historically speaking, comes the act of the theatre ….” What he aimed to accomplish with the art form was “to involve people, even against their will, to shake them up and hopefully, to change them.”

Sister Margaret (played here by Maiya Reaves) is a commanding and charismatic leader who presents herself as an abandoned wife, a protective parent to her teenage son David (Dimitri Woods) and a model of moral superiority and spiritual virtue. But a crisis ensues when the congregation begins to question her pious arrogance.

And when her jazz-musician husband, Luke (Adrian Roberts), suddenly appears, ill and helpless, they question her honesty too. The revelation that it was Margaret who abandoned Luke leads to her downfall within the church and the estrangement of her son.

But the crisis also triggers a “come to Jesus” moment within Margaret’s soul — and her profound transformation from “tyrannical matriarch,” as Baldwin put it, into a humbled, less rigid, more compassionate woman who “gains the keys to the kingdom, the kingdom is love, and love is selfless….”

“It’s a play about the impossibility of running from yourself. No matter what you run to or run from, there’s no place you can hide from that will protect you from being honest with yourself about who you really are,” White says. 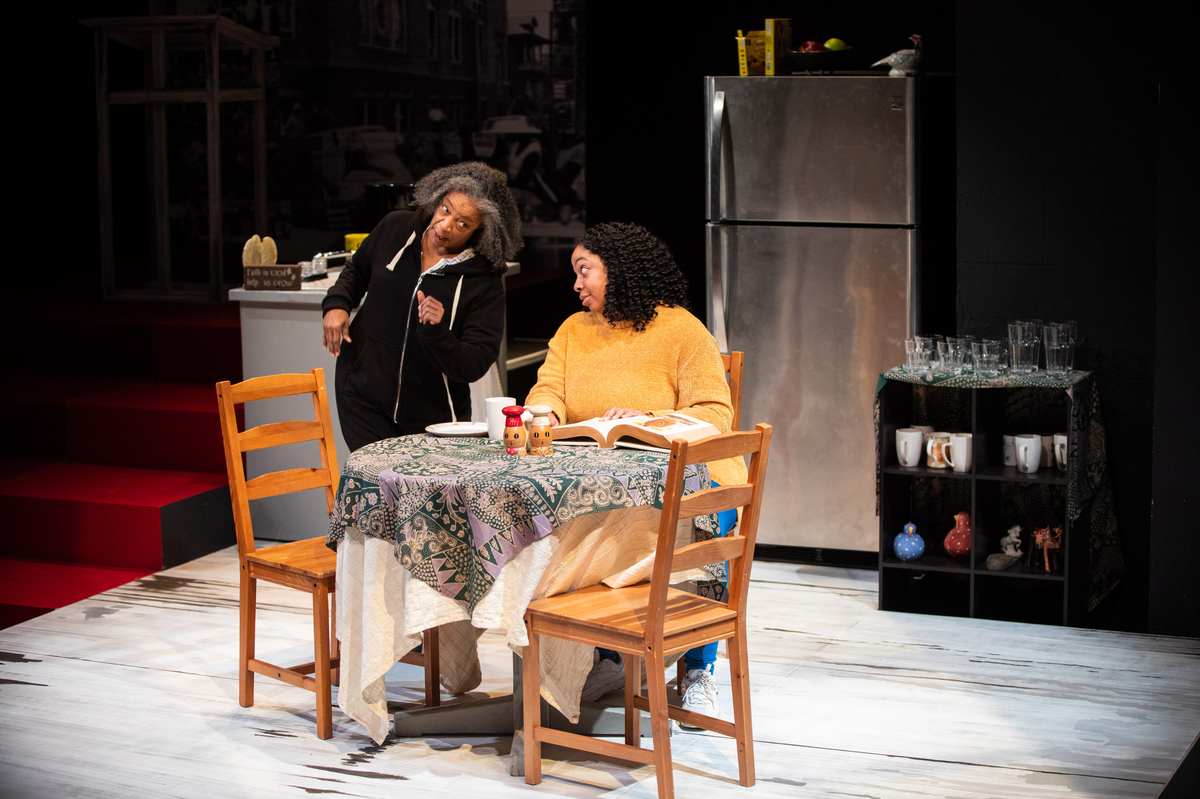 As for Baldwin’s choice of a female protagonist, whose classic tumble from grace has been compared to those of Shakespeare’s King Lear and the biblical Job, White notes, “Any real examination of the Black experience, if you look for 10 seconds there are women who had to pick up the slack, to put the pieces together for their family. You see that in the play.”

Baldwin’s own mother, Emma Berdis Baldwin, for instance, a talented writer herself, raised James and his eight brothers and sisters largely on her own.

The Amen Corner debuted as a student production at Howard University in Washington, D.C., in 1955, and its short run was greeted warmly. But with its pastiche of sermons and musical interludes, it was not the kind of slice-of-realism theater style favored in Black drama of the 1950s. And it was ahead of its time in giving a candid and nuanced portrait of a struggling Black family and urban community with a woman as its tragic and cathartic catalyst.

It took another decade for The Amen Corner to get to Broadway, in a production by The Cambridge Players, a Black theater company in Los Angeles. It transferred to Broadway in 1965 yet lasted only 84 performances. A later Broadway musical based on The Amen Corner had a similar fate.

But the play was presented in numerous regional theaters and toured Europe. More recently it has enjoyed a kind of renaissance, thanks to an acclaimed staging at London’s National Theatre in 2013 and a triumphant 2021 run at The Shakespeare Theatre in Washington, D.C., with one critic noting that nearly 70 years after its debut, “it has lost none of its sharpness or relevance.” 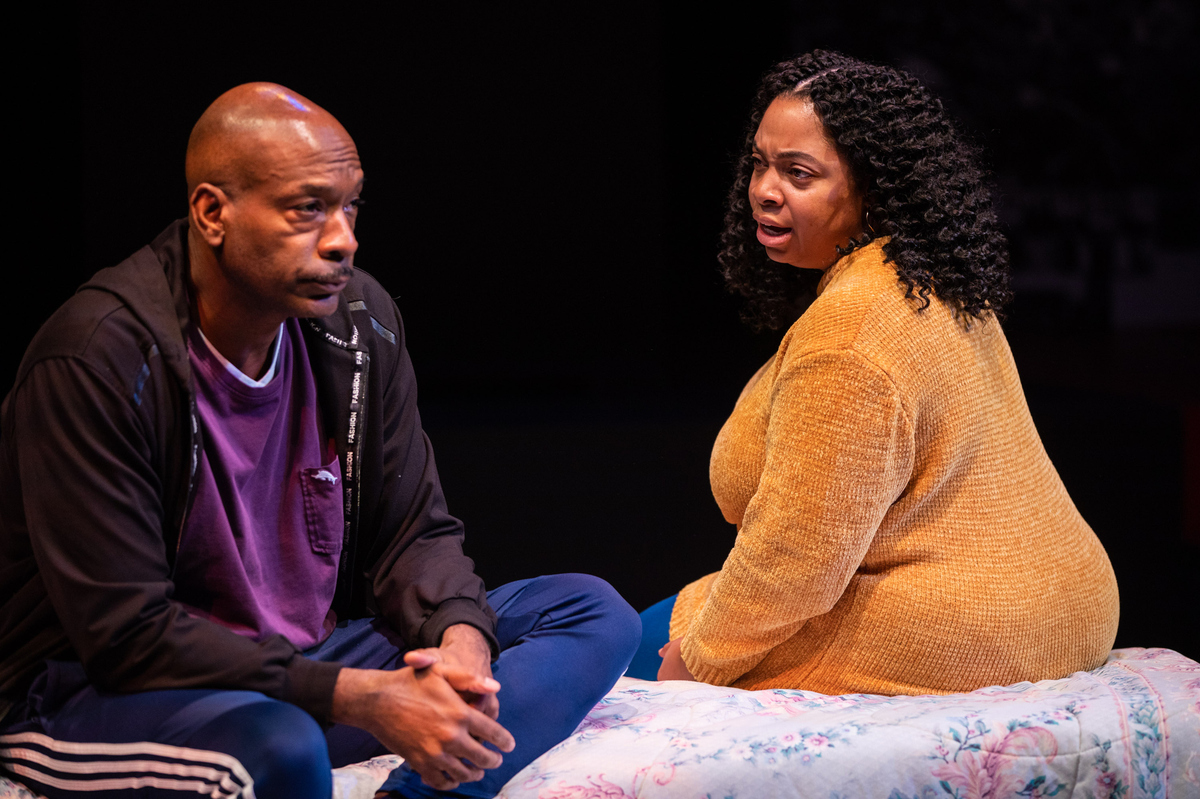 Adrian Roberts as Luke and Maiya Reaves as Margaret during a recent rehearsal for “The Amen Corner,” for which James Baldwin drew on his own experiences with the church. (Amanda Snyder/Crosscut)

Adrian Roberts as Luke and Maiya Reaves as Margaret during a recent rehearsal for “The Amen Corner,” for which James Baldwin drew on his own experiences with the church. (Amanda Snyder/Crosscut)

It took decades for us to see The Amen Corner in Seattle. So why now? Purcell believes the show is very timely: “There’s no better writer for finding hope in the darkness than James Baldwin … [he] is one of our core voices at The Williams Project,” Purcell says. “Returning to a full production after the pandemic, he was our guiding light.”

Interest in James Baldwin’s other works, and in his storied and impactful life (he died in 1986 at age 63), has also undergone a resurgence lately. I Am Not Your Negro, an Oscar-nominated documentary about Baldwin that highlights his outspoken, incisive critique of American racism, is currently streaming on several platforms. A successful 2018 movie based on (and titled after) his novel If Beale Street Could Talk won Oscar and Golden Globe nominations.

And in Seattle, the enterprising Williams Project, which has given us fresh excavations of other important American plays, presented a rare and dynamic 2017 mounting of Baldwin’s second play, Blues for Mr. Charlie. That prophetic drama, written in 1964, depicted the murder of an innocent Black man by a white police officer. Inspired by the lynching of Emmett Till, it was dedicated to slain civil rights leader Medgar Evers.

Visiting director White (who is also a founding ensemble member of The Williams Project) suggests that The Amen Corner offers insight into Baldwin’s own psyche. “I think the best plays happen when playwrights are trying to understand something about humanity or ask questions of themselves,” he says. “It’s so clear Jimmy was deeply engaged in a spiritual inquiry about himself, his family and his history when he wrote this.”

For artistic director Purcell, the play is universal, despite its specific time and setting. “Theatre is about empathy, and for so long the central figure we’re supposed to empathize with on stage [has been] a straight white man. But Sister Margaret is standing in for all of us,” he says. “Her dilemma poses the questions, What do I really believe in? What really matters? How do I protect my child? Most of us can connect to that.” 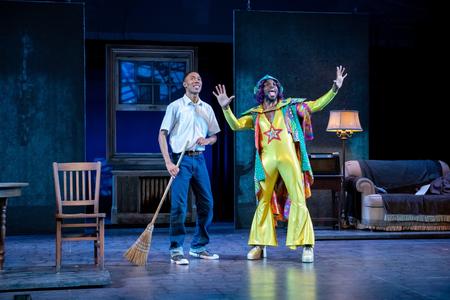 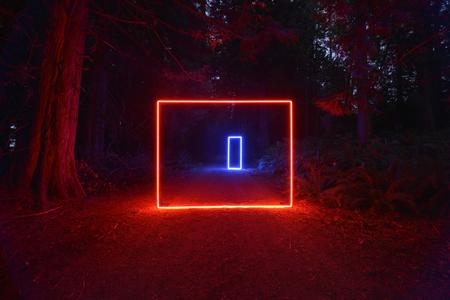 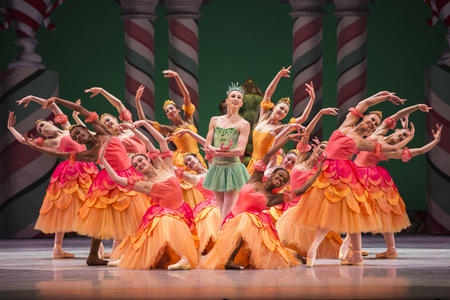