After two appearances in the north-central Washington town, the German and Austrian-inspired Krampus Seattle took its show to Bremerton and beyond. 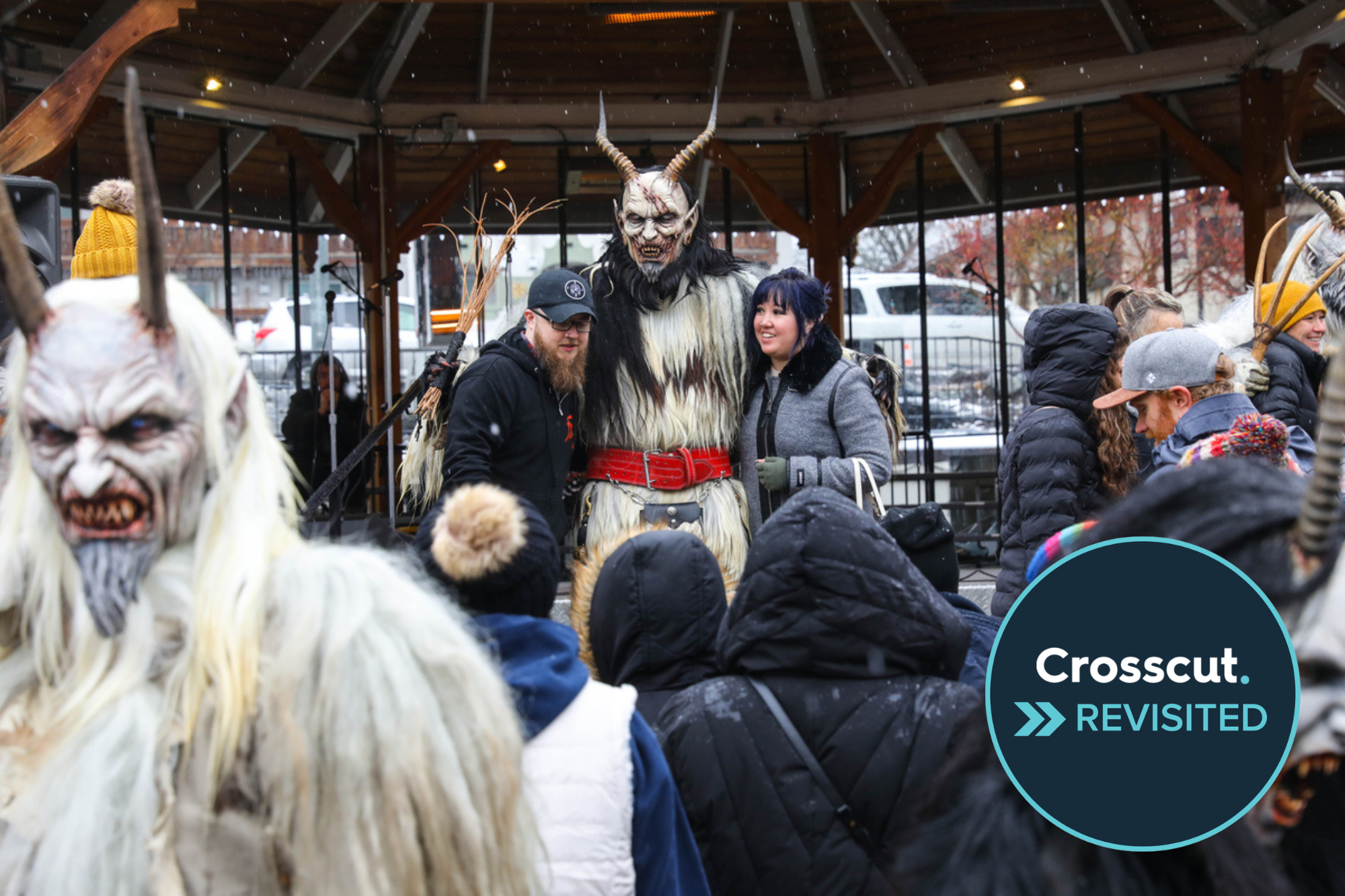 For one night earlier this month, a group of horned half-goat, half-human creatures roamed downtown Bremerton.

Among them were members of Krampus Seattle, who have spent the past few years introducing people throughout the state to a different German and Austrian holiday tradition that dates back hundreds of years.

According to that custom, the Krampus walk the streets scaring children into being good before St. Nicholas’ arrival the following day.

During the 2020 and 2021 holiday seasons, the group, dressed up in hand-carved masks and elaborate fur costumes, celebrated Krampusnacht by roaming the streets of Leavenworth, a Bavarian-themed town in north-central Washington.

Krampus Seattle’s presence that first year generated so much buzz that city leaders invited them to be part of the community’s Village of Lights holiday event, held for several weeks before Christmas. The group’s participation and its version of Krampusnacht were heavily promoted by the Leavenworth Chamber of Commerce, which organized the event.

The event, by all accounts, went well. “It was 99% good,” said Peter Pawlicki, Krampus Seattle co-founder.

But a year later they found themselves in Bremerton, not Leavenworth, for Krampusnacht. Pawlicki said Leavenworth leaders opted not to invite the group for their official 2022 holiday event.

Pawlicki believes community leaders were pressured by a small — but vocal — group who objected to the group last year, arguing that their presence didn’t mesh with the event’s family-friendly reputation.

The complaints were reported by a religious publication and prompted critical posts to the Krampus group via Facebook and e-mail and calls for the group not to be invited back.

While the group was welcome to have an informal presence in Leavenworth as they did a few years back, they decided to shift gears toward events closer to home.

“We just like to go where the people want us,” Pawlicki said.

Jessica Stoller, spokeswoman for the Leavenworth Chamber of Commerce, said she did see people dressed as Krampus walking around and noted that several businesses organized a Krampus crawl event. However, it was not part of the Chamber’s holiday activities.

The chamber also added a section about Krampus on its event website, Stoller said.

“People dressing as Krampus during the first weekend of December [i.e., closest to the Dec. 5 holiday] has also become popular with cosplayers,” the Chamber wrote. “Although not part of the Chamber’s planned festivities, you may very well see them in town interacting with families and businesses. Please plan accordingly if this is a concern.” 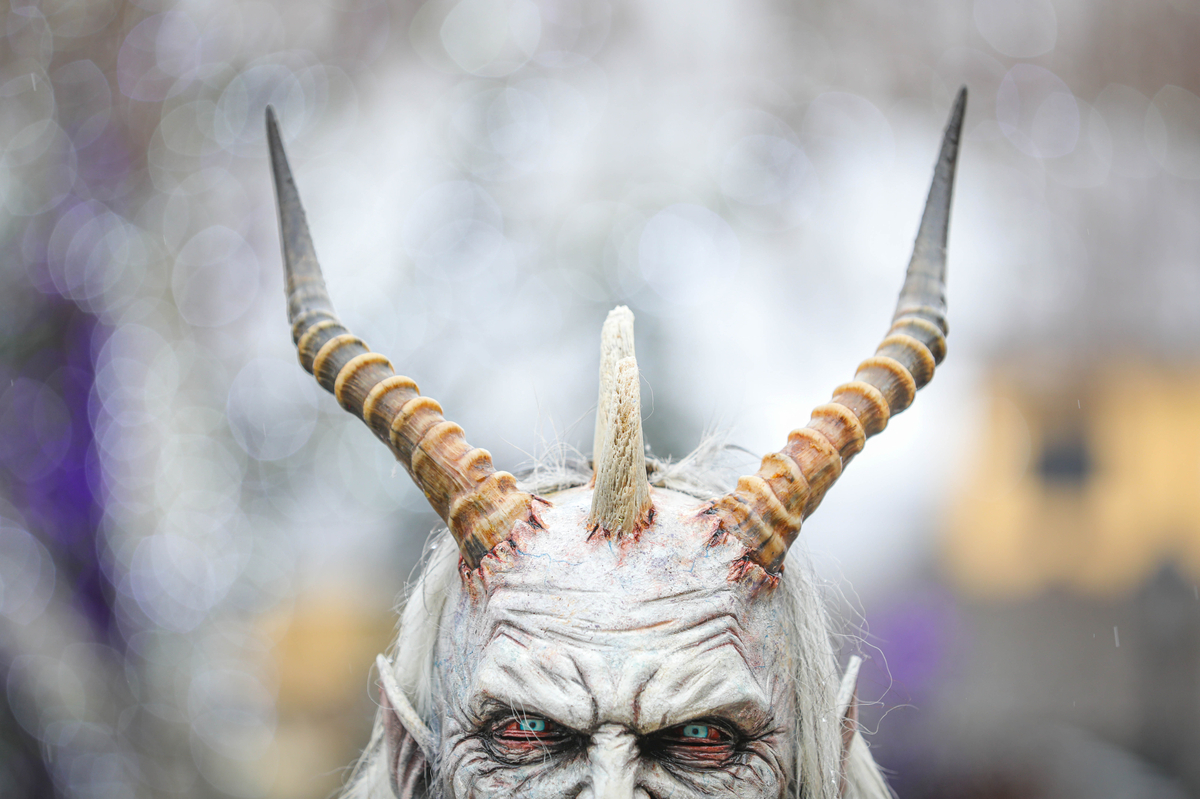 Seattle Krampus member Josh Simon wears his custom costume during a walk through the streets of Leavenworth on Dec. 4, 2021. The horns on the Austrian-made masks are made from those of goats and other animals. (Genna Martin/Crosscut)

Seattle Krampus member Josh Simon wears his custom costume during a walk through the streets of Leavenworth on Dec. 4, 2021. The horns on the Austrian-made masks are made from those of goats and other animals. (Genna Martin/Crosscut)

Despite the venue change, Krampus Seattle has remained booked and busy. They kicked things off with an appearance at a haunted house in Mountlake Terrace run by Pawlicki. This was a return to its roots: The group started when co-founder John Hurst did a Krampus-themed set at a haunted house in Maple Valley in 2017.

Other events included a Krampus liquor release at Chuckanut Bay Distillery in Bellingham, a Kris Kringle Market organized by the Spouses Club of Lewis-McChord in Tacoma and, most recent, an appearance at Kringle’s Filling Station, a Seattle garage converted into Santa’s workshop.

And for the Krampusnacht event in downtown Bremerton, Krampus Seattle teamed with several other Western Washington Krampus groups.

Pawlicki said the response to the event in Bremerton was positive, with city officials excited for an event drawing people to the city, and the program included participation from local businesses.

“It drew a lot of people to the city. It was a great time with everyone,” Pawlicki said. “We had no naysayers or detractors."

Now that the group’s events are done for the season, it will be counting proceeds — it accepts donations and had some paid appearances this year. The proceeds will pay for Krampus stickers to be distributed at future events and a donation to a yet-to-be-determined children’s charity. 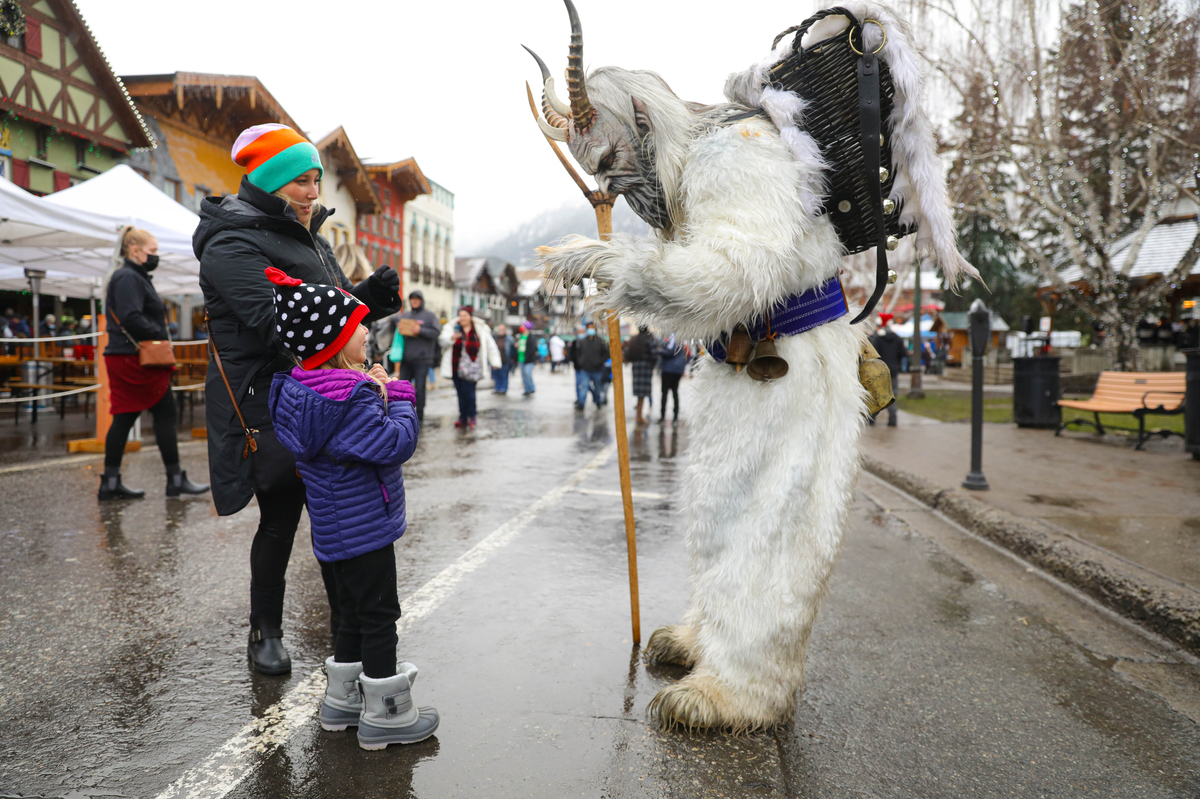 Seattle Krampus member Josh Simon wears his custom costume and waves to children during a walk through the streets of Leavenworth on Dec. 4, 2021. (Genna Martin/Crosscut)

Seattle Krampus member Josh Simon wears his custom costume and waves to children during a walk through the streets of Leavenworth on Dec. 4, 2021. (Genna Martin/Crosscut)

Krampus Seattle is seeing one key sign of success — new groups forming in Western Washington and the rest of the U.S.

“They’re looking at our success and the success of other large groups,” Hurst said. “They’re implementing it in their communities.”

But while Krampus Seattle considers this year a success, the group believes there’s more room to grow. But with all its members juggling full-time jobs, it will need to be more selective about bookings, Pawlicki said.

That could include a holiday event or parade in a Seattle neighborhood. The group also has an invitation from a University of Washington professor to do an event at Red Square.

They also have a long-term goal to visit Europe and meet their mask and costume makers face-to-face. And they want to participate in a traditional Krampusnacht and other holiday events, such as the markets.

However, neither Pawlicki nor Hurst has ruled out a return to Leavenworth.

“I would love to go back if we could make it economically feasible,” Hurst said, noting that the group wants to keep expenses such as lodging manageable so they can raise enough for a charitable donation.