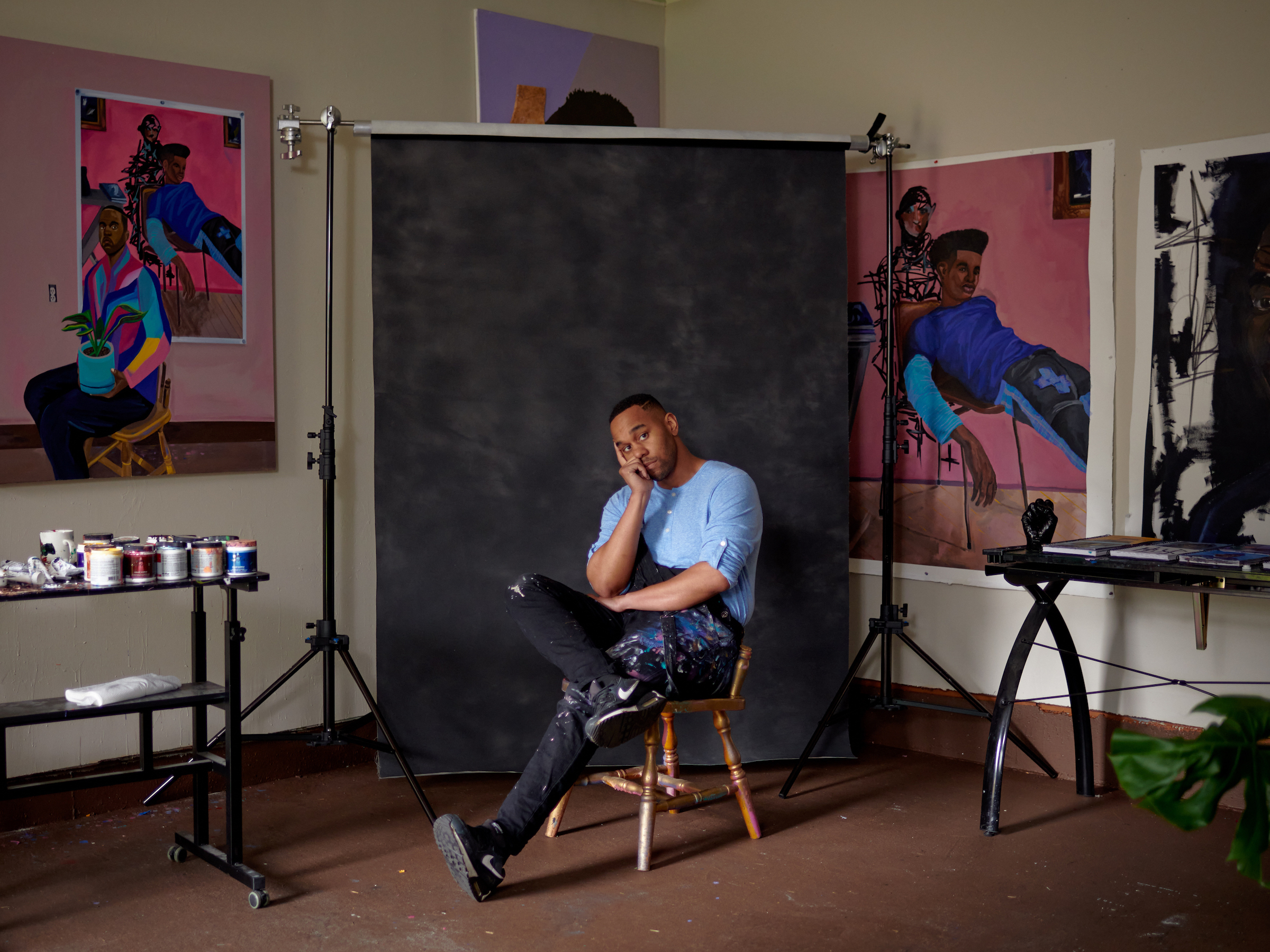 On a recent rainy morning, Seattle artist Barry Johnson stood at the back of Winston Wächter Fine Art with 11 other Barry Johnsons.

The two-dimensional Barry Johnsons stared out from radiant canvases, where they sat on chairs, reclined on couches, or hung out in nondescript rooms bathed in pastel pinks, purples, tangerines and lush emeralds. The three-dimensional Barry Johnson, 38, is having his first solo show at the South Lake Union gallery: For Real Though (through Feb. 25).

Johnson, who is self-taught, created the dozen large-scale, autobiographical paintings over the past year. He says he usually starts a new series of work every year, changing themes, colors, material or subject matter whenever January 1 arrives, a process he calls “rapid and radical exploration.” The reason? “I want to be constantly evolving,” he says.

For Real Though is both a capstone on 2022 and the beginning of a new chapter for Johnson. While he’s risen to local prominence as a prolific public artist and member of the Vivid Matter Collective (behind Seattle’s Black Lives Matter mural), this is Johnson’s first exhibit with Winston Wächter as a represented artist. The representation means he can tap into the gallery’s clientele and know-how — and leap further in his career. “This is a big moment,” he says. “I can walk into my studio and pick up the work [that] has been there for years collecting dust.” 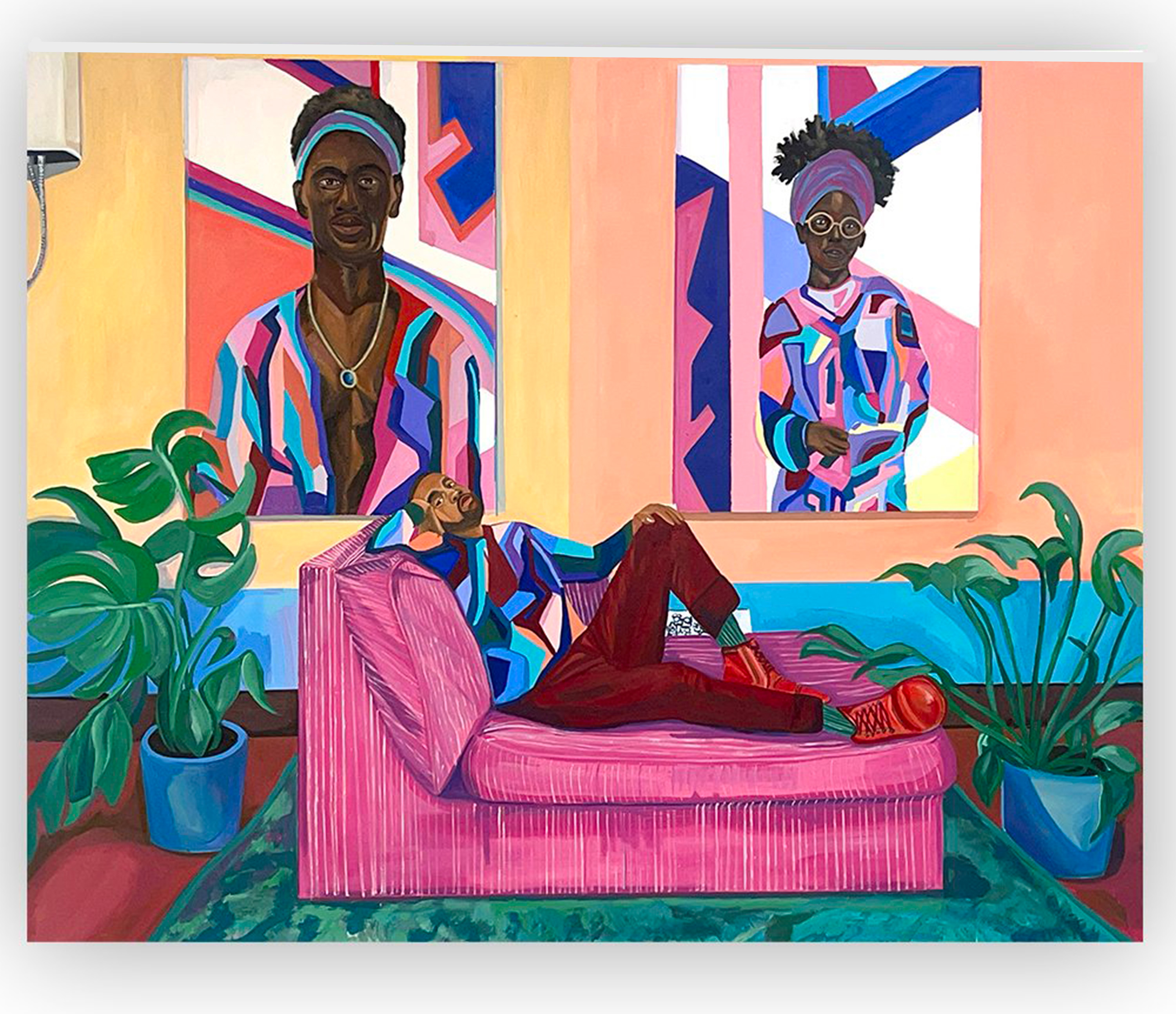 In “That One Time” (2022), Seattle artist Barry Johnson depicts himself on a hot- pink couch, relaxed and unbothered. (Barry Johnson/Winston Wächter)

In “That One Time” (2022), Seattle artist Barry Johnson depicts himself on a hot- pink couch, relaxed and unbothered. (Barry Johnson/Winston Wächter)

Originally from Topeka, Kansas, Johnson is an affable guy with a fashionable bent. At Winston Wächter, a black, wide-brimmed Trilby hat and dark round sunglasses punctuate his all-black outfit, a departure from the brightly hued sweaters adorned with tessellated patterns worn by his doubles in the paintings. In a way, these sweaters are paintings within the paintings, a section of the canvas where Johnson can experiment with abstract expressionism.

But Johnson has also found another way to incorporate the breadth of his previous artworks: by repainting them as if they are hanging in the background of his newer paintings.

“Look at the two portraits within this piece with me lying on this couch,” Johnson says, as we arrive at “That One Time” (2022). The painting depicts him on a hot-pink couch, reclined like an odalisque (albeit dressed), relaxed and unbothered. Behind him, on a wall in hues of cantaloupe and banana, hang two portraits of other people. “Those original portraits were made in 2016,” he says about the paintings within the painting, taken from his series of graphic, polychrome portraits of imagined Black subjects.

Johnson has been painting and working in yearly series for nearly a decade. In 2015, in the wake of the killing of Mike Brown by a police officer the year before, Johnson spent the entire year painting exclusively in black and white, a form of mourning. An explosion of color followed the next year. In 2021, Johnson challenged himself to paint a small portrait every day. In 2022, he turned to his own likeness, photographing himself in his Federal Way studio, resampling the photo in Photoshop and then painting the result in Hockney-esque, vivid colors.

“It makes sense that at the end of all this ferocious study of the face, the figure, all these different people, I centered the work on myself and my studio practice,” Johnson says. 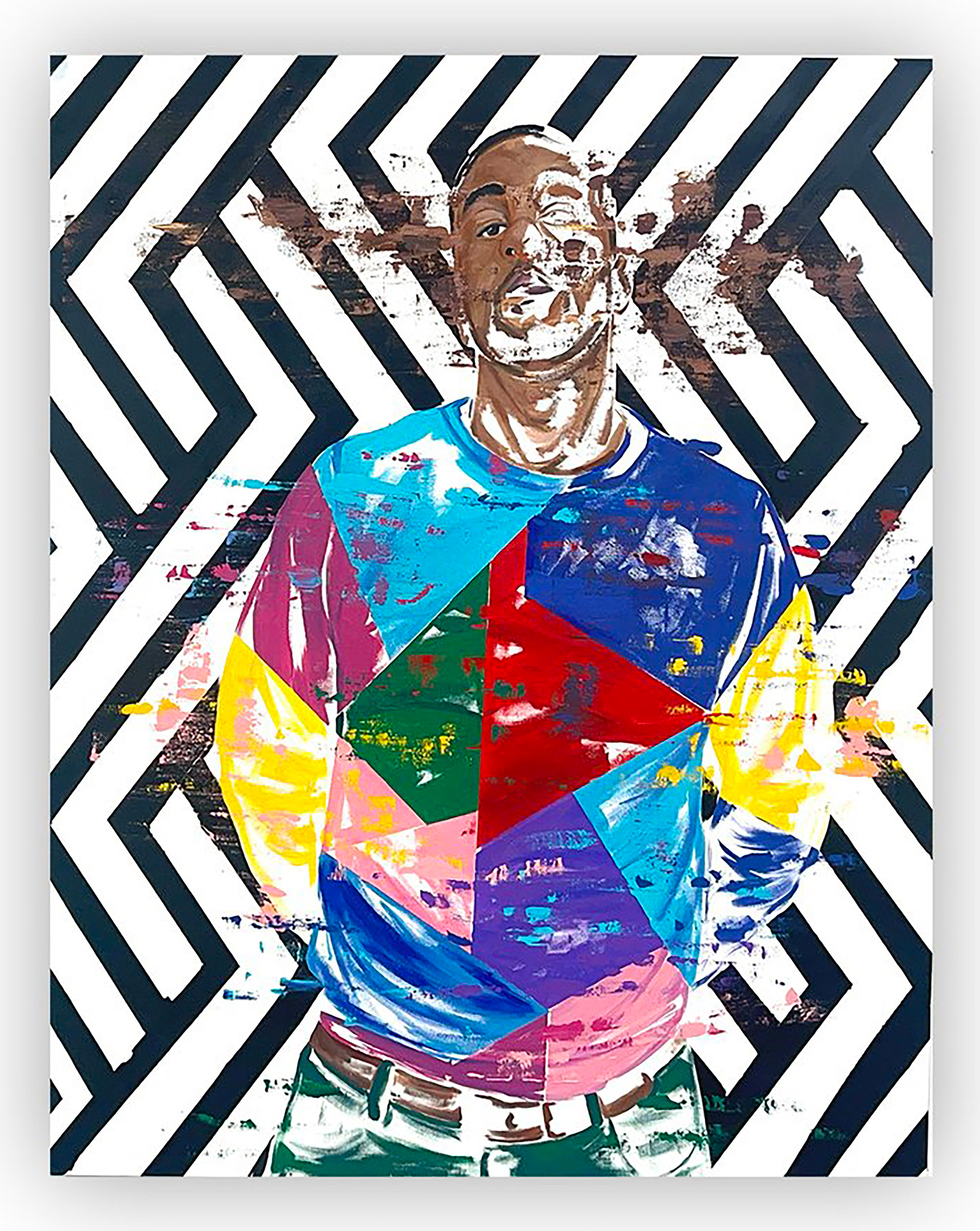 “Pretty Boy Barry,” one of the many self-portraits on view in Barry Johnson's solo show ‘For Real Though.’ (Barry Johnson/Winston Wächter)

“Pretty Boy Barry,” one of the many self-portraits on view in Barry Johnson's solo show ‘For Real Though.’ (Barry Johnson/Winston Wächter)

Johnson likes to use the word “flirting” when describing the ever-evolving nature of his paintings. He flirts with using latex paint (for thick, sculptural layers) and oil paint (smoother), switching back and forth. He flirts with abstract expressionism (see: the colorful sweaters) and the “idea of duality” (see: the duos of paintings, his many doubles).

Flirting would also be an apt term for his philosophy of constant self-reinvention. In a 2019 TEDxSeattle talk, Johnson described his many careers — from bodybuilder to consultant to artist — as a cast of personas he embodied. His current persona is barry johnson the artist, with lowercase b and j. “The barry now that I am is a culmination of all that,” he says.

“Being a self-taught artist coming to Washington, not knowing anyone or being able to get involved in an art scene and not have any support, not know how you reach out to a gallery, not know how you pitch — you have to embody this whole notion of fake it till you make it,” Johnson says.

In some paintings, his subjects’ identities seem interrupted, the faces half obscured by paint or red tape. In others, his own face is partially missing, as if it’s either being erased or still coming into full view. 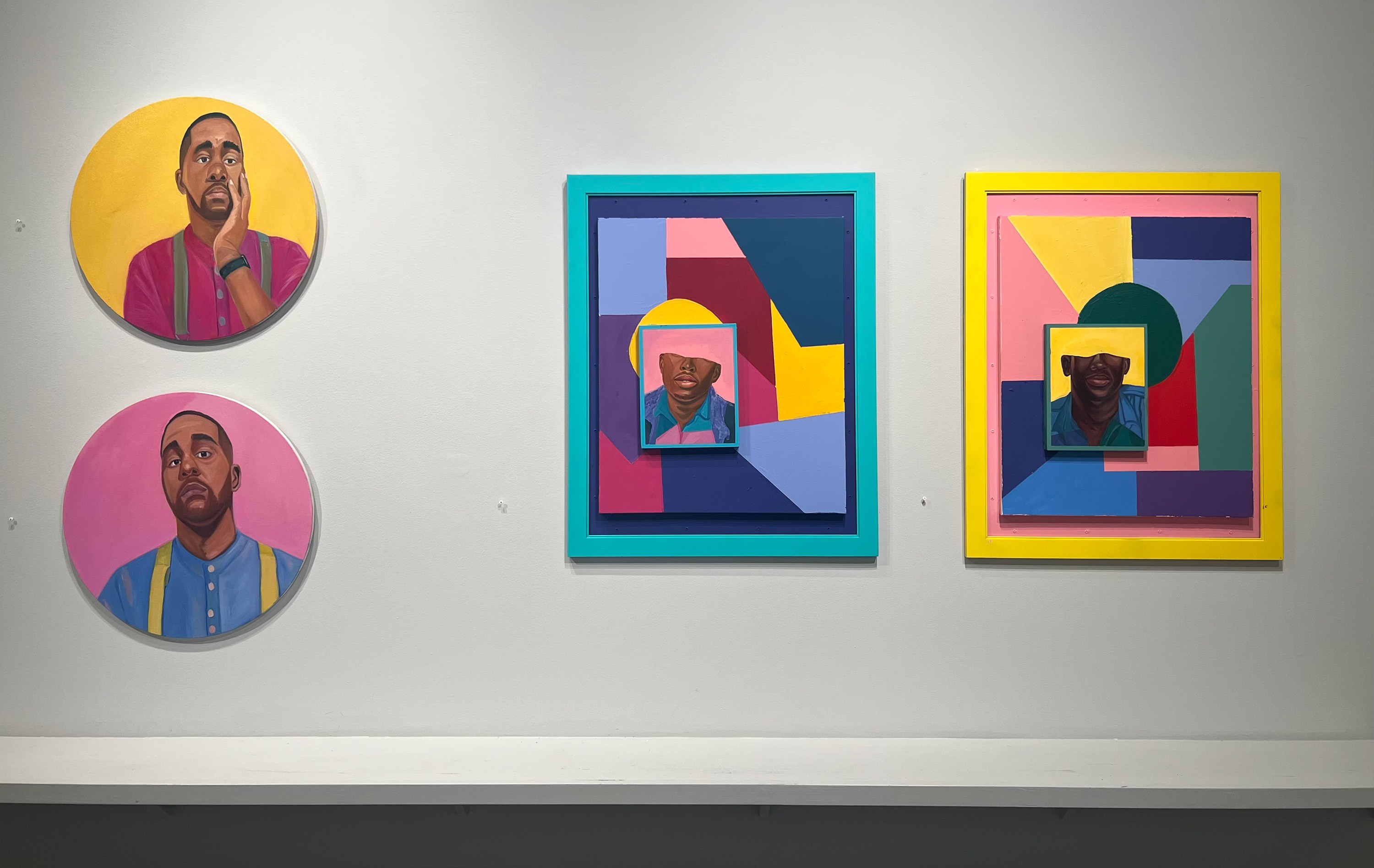 At the gallery, we stand in front of a solemn (but no less colorful) painting. In it, Johnson sits on a chair in front of a pastel pink wall, on which hangs a canvas featuring a man in a crimson durag. The right side of the man’s face is unfinished and red markings slash through his torso.

“This was the first work … after George Floyd,” Johnson says. “It was literally made 14 hours after that video went out.” The image is incomplete, like a life cut short.

In the same piece, Johnson’s face remains inscrutable. His expression is notably solemn throughout the works, in contrast to his friendly eyes and wide smile in person. “You’re never seeing any expression on my face,” Johnson says, regarding his self-portraits. “It’s me sitting with the work, reflecting on things I’ve done and how that work came together.”

It’s also just himself existing as a Black man. “A lot of my figurative work is a form of protest: Black bodies taking up space,” he says. “Like, I’m here, existing, I’m not here commanding your attention, I’m not telling you to look at me, I’m just here responding to the environment,” he says.

Johnson says much of his work is made in response to “the trauma that was done unto us historically.” But he also imbues his paintings with a sense of hope, growth and regeneration, embedded in the lush monstera plants that frame a couch, or roses held in his hand.

This year, the plants will morph into trees. Johnson is working on a new series of landscape paintings as a vehicle to explore the relationship between Black people and trees, he says, as well as the landscape of the Pacific Northwest. “So whenever I do my show later this year,” he says, “it’s going to be radically different.” 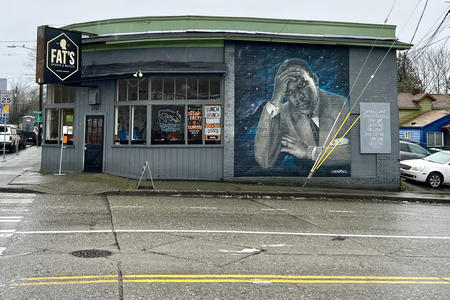