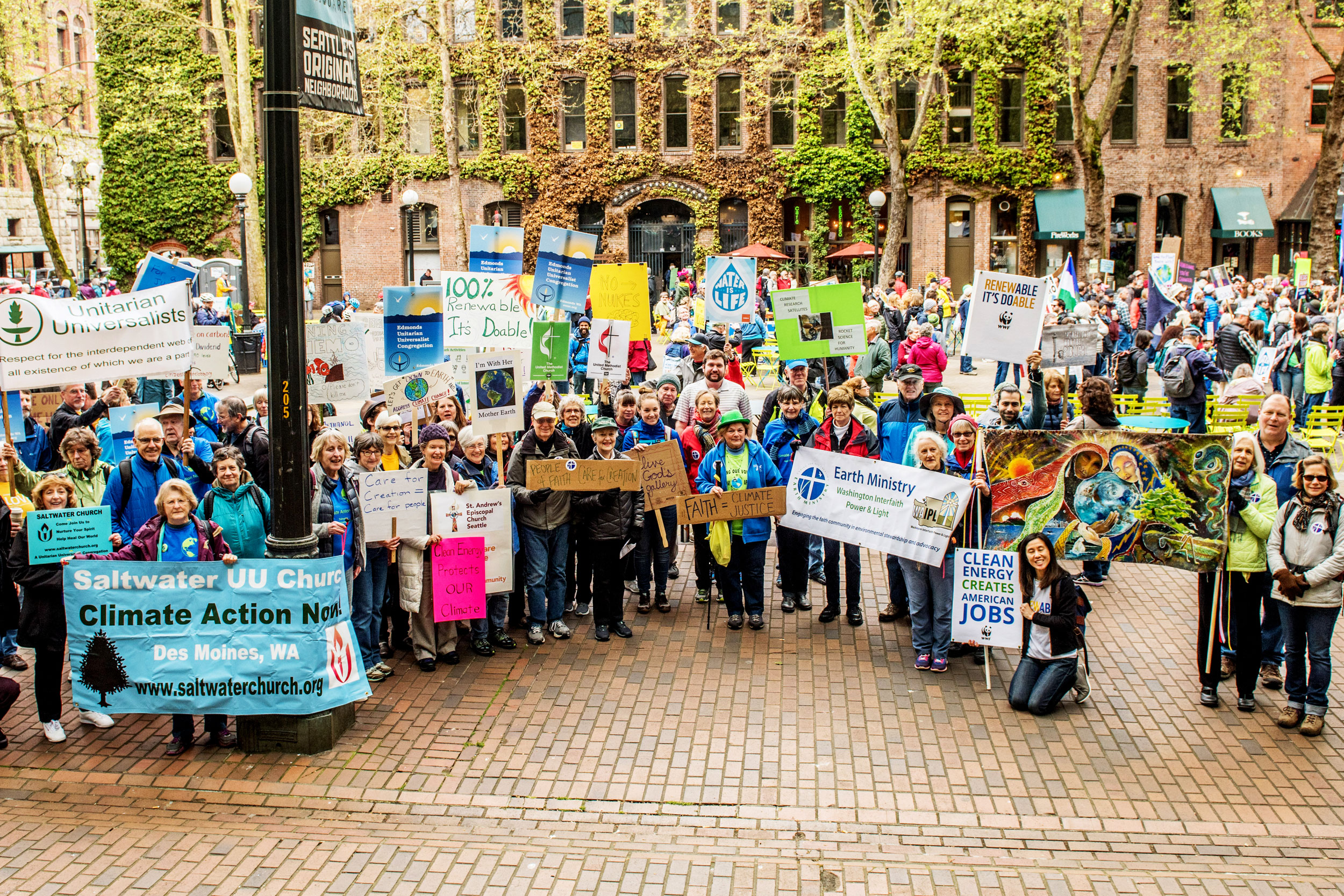 Every week, Seattle First Baptist Church sends an online newsletter to hundreds of its parishioners. A recent edition included announcements of the kind one might expect: a get-to-know-your-pastor event; a book discussion; a school supplies drive. But in one key section, the church broke with the usual to endorse a highly anticipated state ballot initiative that would place a fee on carbon emissions.

“God's creation and Earth's ecosystems are crying out for long-term solutions for a changing climate,” the announcement said. “Initiative 1631 is an excellent first step towards creating a healthy and homegrown energy future.”

Seattle First Baptist isn’t alone. In fact, the church is part of a large ecosystem of faith communities pushing for this carbon fee policy and several other pieces of green legislation. Together, they make up the faith-based environmental advocacy organization known as Earth Ministry.

While religious groups have received considerable attention and criticism for their stances on political candidates and ballot measures in recent years, the idea behind Earth Ministry isn’t new. The group was founded about 30 years ago, after a devastating oil spill in Washington motivated its members to take the religious values of environmental stewardship into the realm of multi-denominational advocacy and action.

Today, Earth Ministry is made up of about 5,000 individual members and 500 congregation members primarily in Washington, and is headquartered in a church in Ballard. Ecumenical from its conception, Earth Ministry has expanded to include a diverse coalition of members from Christianity, Judaism, Islam, Buddhism and beyond.

For the last three years, it has been one of the key groups involved with the carbon fee. This policy would charge large corporate polluters $15 per ton of carbon emissions, starting in 2020. The funds collected would then in turn support clean energy projects, protect natural resources, and offer aid to communities damaged by pollution.

Opponents of the initiative have questioned its potential effectiveness and worried about how the carbon fee would impact local businesses and consumers. Both would likely face higher costs, especially at the gas pump.

Earth Ministry’s senior campaign strategist Jessie Dye said they see the initiative as an excellent way to help care for the world, a gift given by God, and to keep it safe for future generations.

Each month, Dye meets with a large initiative coalition that includes various tribal nations and business advocates to work on carbon policy. She doesn’t claim to be a policy expert, but Dye joined the effort on behalf of Earth Ministry to ask questions about fairness, equity, and conservation outcomes — all core elements of the organization’s mission. Part of that mission involves bringing moral clarity and urgency to science and policy speak that can be opaque to the layperson.

“We can bring a moral and spiritual voice to the policy that speaks of it in a different language than parts per million,” she said.

After the policy language was finalized earlier this year, Earth Ministry sent out an email blast to their members across the state to ask if they would like to participate in a push to support the initiative. Willing congregations were then sent policy information packets and a guide for gathering signatures.

With the November vote nearing, Earth Ministry has held about 20 adult education classes to discuss policy and answer questions. They are also reaching out to an array of clergy and church leaders to ask for endorsements and drafting inserts for faith communities to include in their weekly bulletins.

“I think the strength of us as a community organization or community partner is that everyone we speak to belongs to a larger community — so there’s a magnifying effect,” said Dye.

But as with any diverse community, not all faith groups view this issue or even the broader issue of environmentalism the same way. On a national scale, Earth Ministry works closely with the conservation organization Interfaith Power & Light. But there are also religious figures that do not support these types of conservation efforts, including Albert Mohler, a key evangelical figure who has argued that a lot of environmental discourse does not align with Christian thinking. A number of conservative religious leaders in the Northwest, contacted by email, declined to comment on the initiative or its endorsement by Earth Ministry.

And Earth Ministry faced a tepid initial response itself. Calls for help with the carbon fee yielded offers of participation from only 100 of its congregations. Some members responded by saying they preferred not to wade into policy issues, while others had questions about how this fit in with the separation of church and state.

Churches cannot endorse a political candidate without risking their tax-exempt status, though a number of conservative groups — including the Family Research Council — have sought to change the law on political activity. But churches have wider freedom to advocate for particular policies, if not candidates.

Earth Ministry did not start out in the policy realm of environmentalism. Its first two decades were focused primarily on preaching and teaching the connection between faith and creation care, and helping to start local environmental programs, such as recycling groups and gardens, said Dye.

But over the past decade, its focus has expanded to lobbying and policy advocacy in an effort to have a broader impact.

Over the past year, the group has advocated for such legislation as the oil-spill bill, which is meant to boost the state’s ability to prevent costly oil spills, and a proposal that was aimed at reducing the carbon intensity of the state’s fuel. Members also protested the proposed Tesoro oil terminal, which Gov. Jay Inslee rejected.

Seattle First Baptist Church member Keith Ervin said when it came to deciding whether or not to support the carbon fee initiative, the decision was practically a “no-brainer” for the congregation.

“We’ve got a Legislature that while the earth is burning and while we’re smelling the smoke of fires caused by climate change here for the third year in a row, they’re refusing to act,” said Ervin, a founder of the church’s climate group. “If they’re not going to act to protect us and protect our children, then we have to act ourselves.”