Puyallup tribal leaders led a march and rally on Tuesday for residents who remain opposed to a liquefied natural gas facility. Boosters insist it could bring jobs and lower emissions. 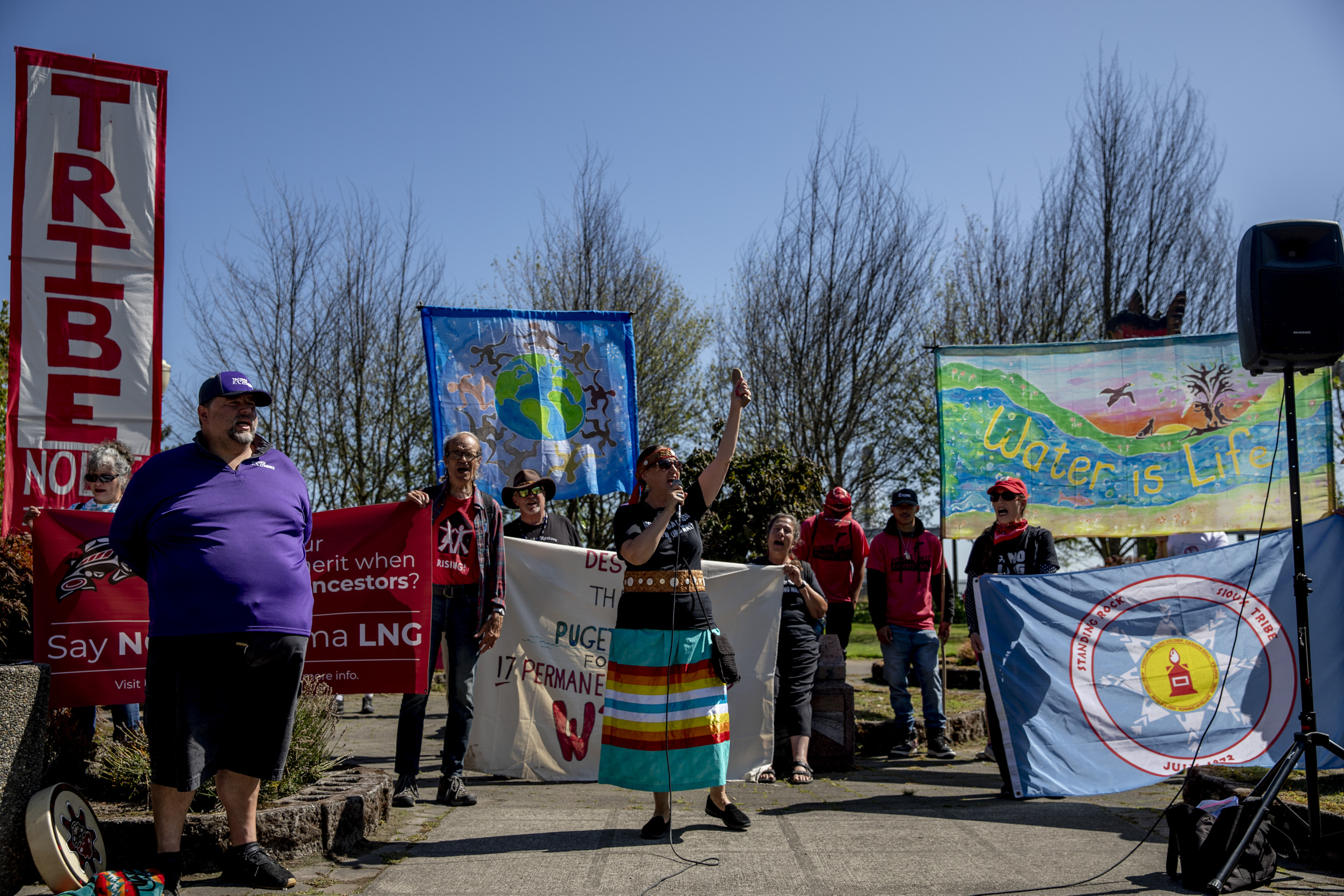 Puyallup Tribal Councilmember Annette Bryan speaks during a rally in protest against the Puget Sound Energy LNG project in downtown Tacoma on Aug. 27, 2019.

Since Puget Sound Energy announced plans to build a liquefied natural gas facility in Tacoma over five years ago, regular protests by residents have dogged the project. Ahead of a public comment period on the facility’s final necessary permit, those protests continued on Tuesday: Approximately a hundred people rallied in Tacoma’s streets, marching a mile down Pacific Avenue and briefly blocking an intersection to bring attention to the issue.

Many of the protesters were Puyallup Tribe members. The facility is being built on historically Puyallup tribal land, and opposition groups like Frack No 253 argue that nearby residents within a certain distance from the facility could be killed in the case of an LNG-related explosion. The city of Tacoma denies this on its website, stating that such worries “are based on worst-case scenarios involving a terrorist attack on an LNG cargo ship resulting in an uncontrolled spill of LNG over water.” One family of Puyallup Tribe members at the rally held an umbrella with the words “We Live In The Blast Zone” lettered in yellow duct tape on its top.

“We live right off the street that’s closest to the tideflats,” said one young member of the family, Amenda (last name withheld), while marching with others toward the site of the public hearing. Her family has lived in the area all her life, she added, so the possibility of harm hits “very close to home.”

Puyallup Tribal Councilmember Annette Bryan, who has joined other Native leaders in opposing the facility’s construction, said the project lacks adequate analysis of the facility’s human impact. The area is largely industrially zoned and Bryan thinks it may have made more sense for it to be zoned as such before residents moved to its surrounding areas. 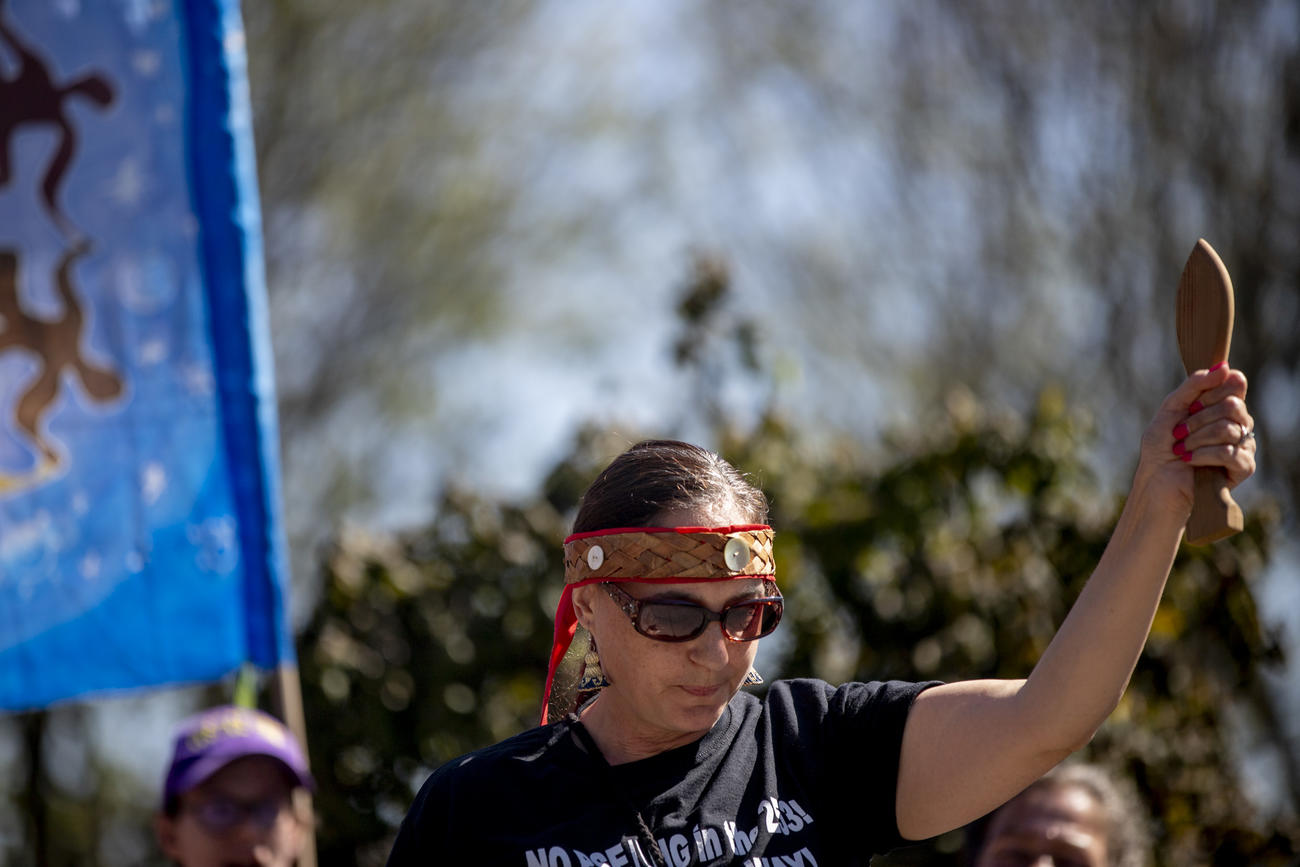 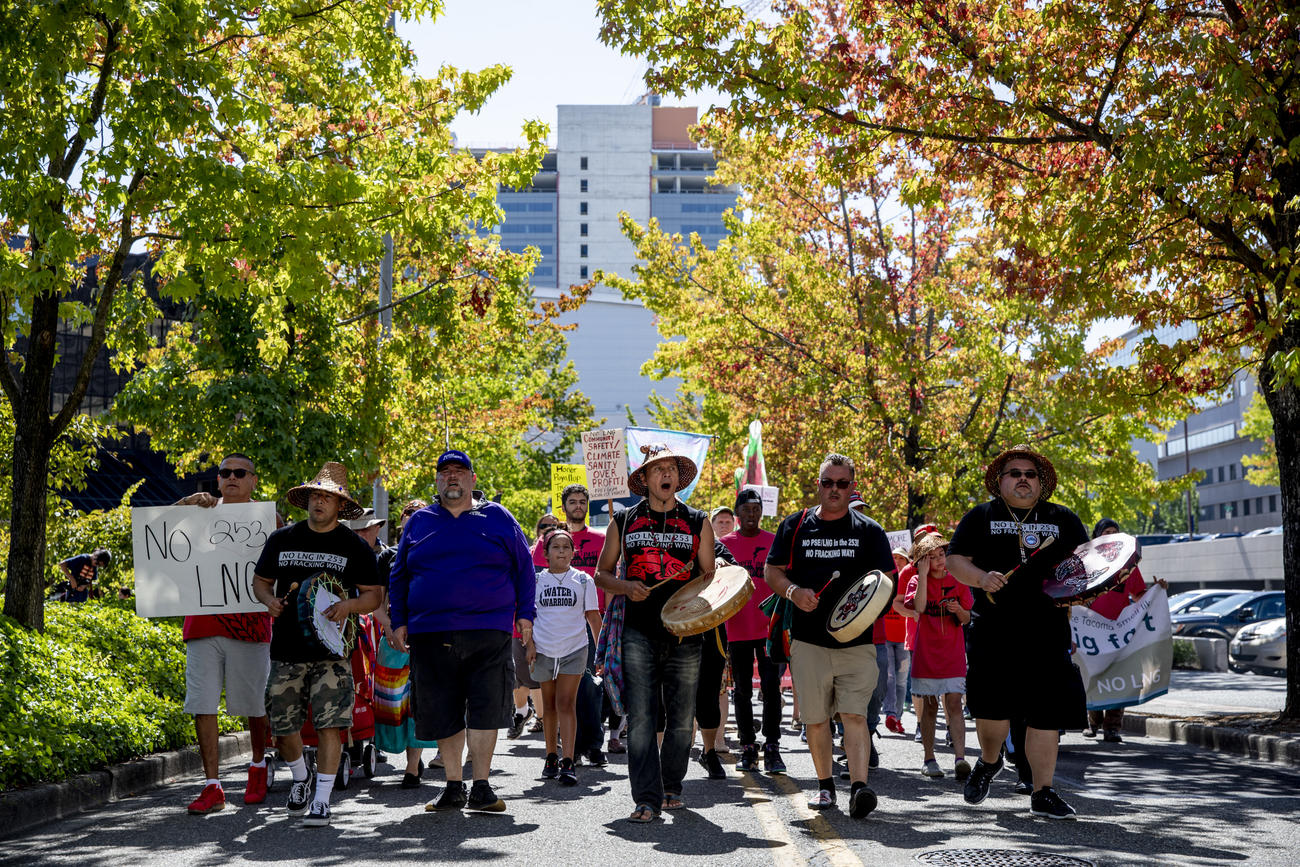 Puyallup tribal members and supporters march in protest against the Puget Sound Energy LNG project in downtown Tacoma on Aug. 27, 2019.

Puyallup tribal members and supporters march in protest against the Puget Sound Energy LNG project in downtown Tacoma on Aug. 27, 2019. 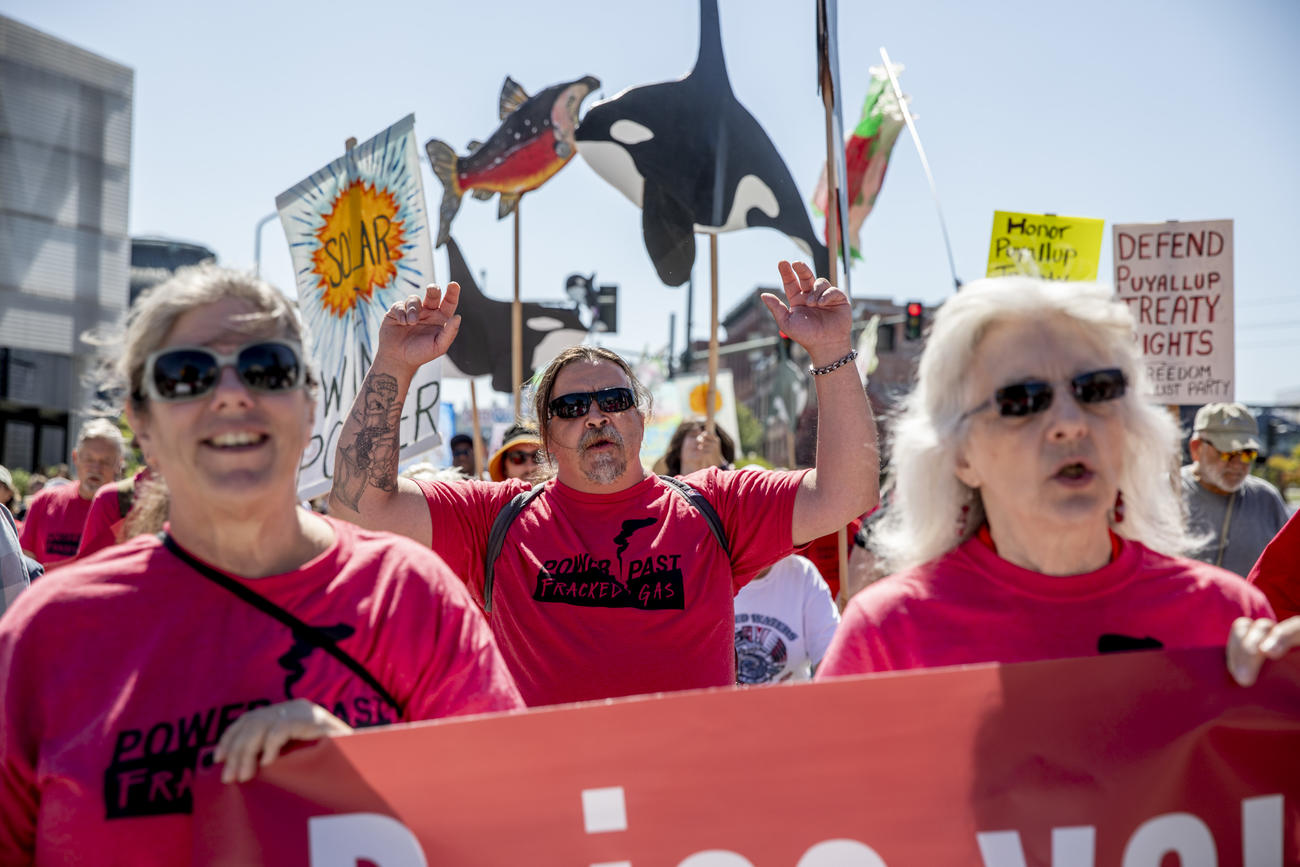 Puyallup tribal members and supporters march in protest against the LNG project, Aug. 27, 2019.

Puyallup tribal members and supporters march in protest against the LNG project, Aug. 27, 2019. 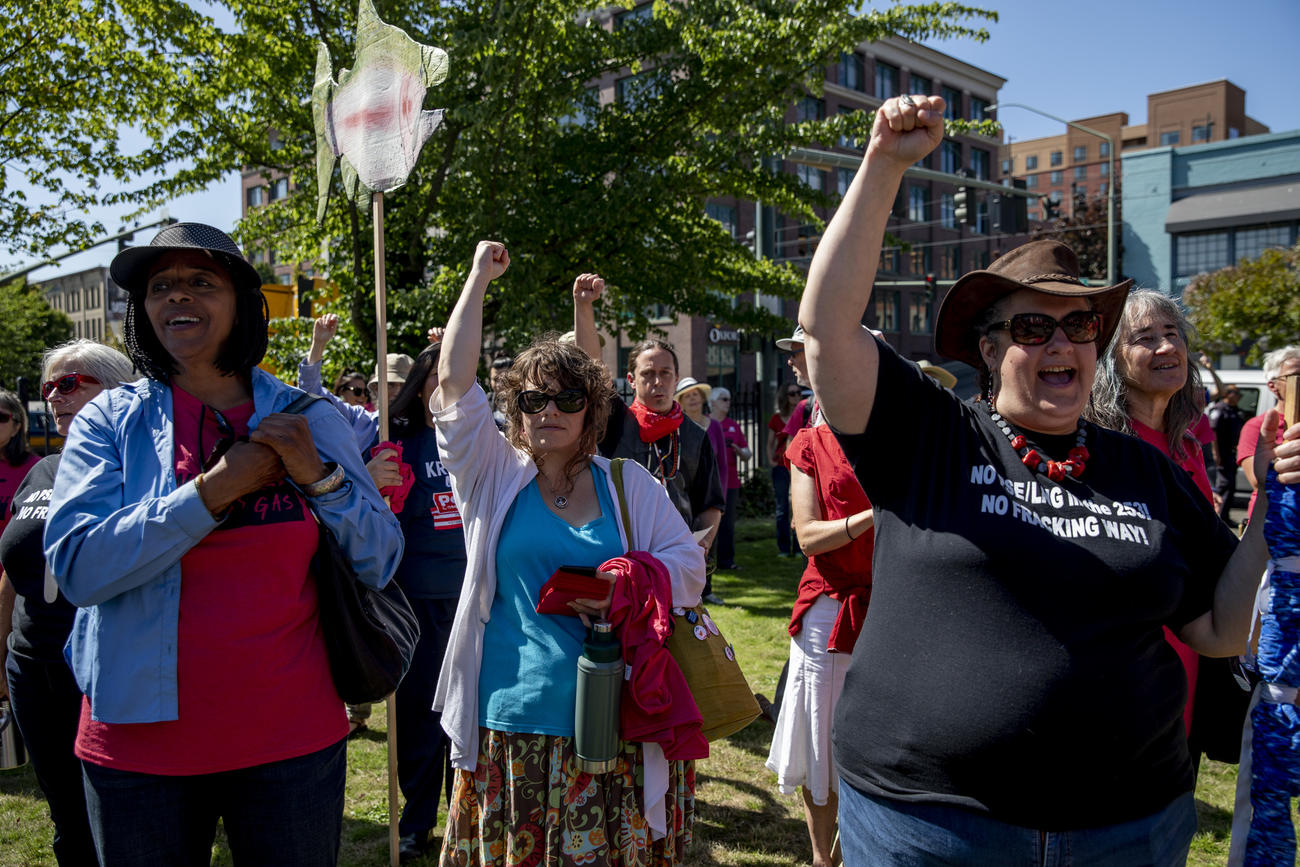 “[Zoning] the tideflats as industrial 20 years ago made sense for Tacoma,” Bryan says. When she moved to the area over 40 years ago, she says there weren’t many houses, so she understands why it was originally zoned as such. But now, she says that “there are houses everywhere.”

The Puget Sound Clean Air Agency (PSCAA) held the public hearing on the controversial LNG project at the Rialto Theater, where protesters ended their march and continued to rally outside. This was the first in-person public comment period following the news that, on July 22, the PSCAA granted preliminary approval of the project’s Noise of Construction Application, the final major permit needed for the facility to become operational. The agency said “the proposal meets all the requirements of Agency Regulations [...] and should be approved.”

Crosscut reached out to the PSCAA, but a spokesperson said the agency would not be able to discuss details of the project beyond what’s listed on the agency’s website.

The theater was packed with both protesters against and advocates for the facility. Those who spoke in support cited job opportunities and reduced emissions as benefits of the project.

“I was part of the team that brought the first LNG-powered ships into the market,” TOTE Maritime vice president of operations Chris Rye said. TOTE, based in Jacksonville, Florida, has two ships there that have burned LNG safely, added more jobs to the area and improved the community’s environment, according to Rye. “That success story I personally seek here in Tacoma,” he said.

The energy in the Rialto mirrored the general atmosphere that has accompanied the project’s bumpy launch. Rye and other supporters’ comments were met with a mix of applause from allies and boos from critics. PSCAA reviewed the LNG facility’s environmental impact and accounted for public concerns in the Final Environmental Impact Statement released on March 29. Despite criticisms from both residents and local and state officials, the project has plowed onward, boosted by advocates who say that it’ll offer jobs and provide cleaner fuel for maritime shipping than what’s currently available, which is often a diesel-based product commonly known as “bunker fuel.”

The facility is being built on Port of Tacoma property. A port spokesperson says using LNG to fuel ships follows a trend that the maritime shipping industry has been moving toward. He maintains it’s an improvement over bunker fuel and would offer a “net reduction in greenhouse gas emissions.” The facility would fuel two TOTE maritime ships that make about a hundred round trips between Tacoma and Alaska annually.

“It’s an imperfect solution, but we’re sort of stuck in this conundrum,” the port spokesperson says. “Do we do nothing and continue to do what we’re doing now, which is continue to burn heavy fuel and wait for technology to come around?”

Written comments can be submitted to the Puget Sound Clean Air Agency until Sept. 9.