The release restores traditional access to salmon for PNW Natives and could give the imperiled fish a leg up on climate change. 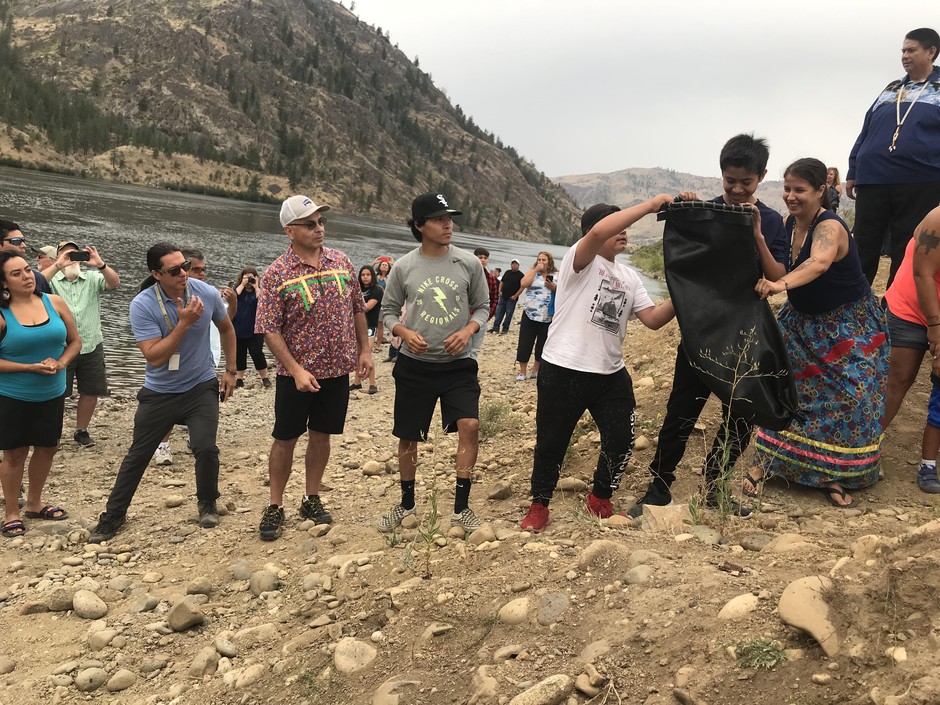 A chain of people pass bags filled with salmon from a truck to the Columbia River at Chief Joseph Dam on Aug. 9, 2019. (Photo by Courtney Flatt for Northwest Public Broadcasting)

Salmon are now swimming in the upper Columbia River for the first time in decades. For tribes, Friday’s ceremonial fish release is a big step toward catching fish in traditional waters.

Cheers erupted from the crowd as the first salmon was released since 1955 into the Columbia River above Chief Joseph Dam.

It was the first of 30 fish released. A truck transported the salmon up and around the dam, in northeastern Washington. A chain of people lined up shoulder to shoulder. They passed bags filled with one salmon at a time from the truck to the river.

Colville tribal member Crystal Conant released the final fish of the day. She said returning salmon to the upper Columbia will help heal the tribe and the ecosystem.

Since the construction of Grand Coulee Dam, she said, “we haven’t had our salmon, and we haven’t had our ways. For 80 years, this has been taken from my ancestors. To be a part of the first people to put it back, it’s hard to even talk about without getting emotional.”

As she released the salmon, she prayed for it to have a healthy life.

“It felt good to touch that salmon and talk to that salmon — to know that my prayers went directly into the river with that salmon,” Conant said.

Everyone from children to elders helped release salmon into the river. Conant, 34, said she was overjoyed that someday her grandchildren will be able to fish for salmon near her home.

Norma Sanchez, a Tribal Council member, stood on the banks of the river, helping guide the fish. She’s been driving up to three hours just to fish for salmon. She grew up fishing here with her family, using only a willow branch and a string.

Now, she is hoping to be able to catch salmon closer to home within five or six years, she said, although it will likely take longer than that.

“My grandma is probably up there just praying on us,” Sanchez said. “They used to eat fish as part of their daily lives. So much so that they were sick of fish. It’s a luxury now. To not have any fish is just making our tribe and this area sick.”

Sanchez said she watched as each fish swam into the river.

“To me, I feel that their spirit is just as happy as ours. For any salmon, their goal is to get to the highest point of the stream they come back to,” she said.

There’s good reason to get these salmon to cooler waters above Chief Joseph and Grand Coulee dams. Colville Tribal Chairman Rodney Cawston said this move is especially important as climate change continues to cause waters to warm.

“In time, one way we can really see the fish survive is to see them above Chief Joe and Grand Coulee again because of that cooler, colder water up north that they really need,” Cawston said.

The tribes are releasing salmon that are not on the endangered species list. Plans are to release summer chinook and sockeye salmon.

The first part of studying whether to bring salmon back to the blocked area showed hundreds of miles of habitat that could support tens of thousands of adult salmon and millions of young salmon.

On Friday, the tribes will release a small number of salmon above Grand Coulee Dam. Larger experimental releases may happen over the next few years.

There are still a few questions to work out:

Friday’s cultural release was a far cry from when Cawston’s relatives participated in the Ceremony of Tears at Kettle Falls 80 years ago, when the last run of salmon returned to the area as Grand Coulee was constructed.

“It’s a very sacred day for us to see fish back up in the upper part of the Columbia again,” Cawston said. “This is where they need to be. They need to come home.”

This story was originally published on Northwest Public Broadcasting.