After nearly a quarter million escaped fish resulted in a ban on Atlantic salmon farming in Washington, Cooke Aquaculture is attempting to transition to native steelhead. Environmental advocates are concerned. 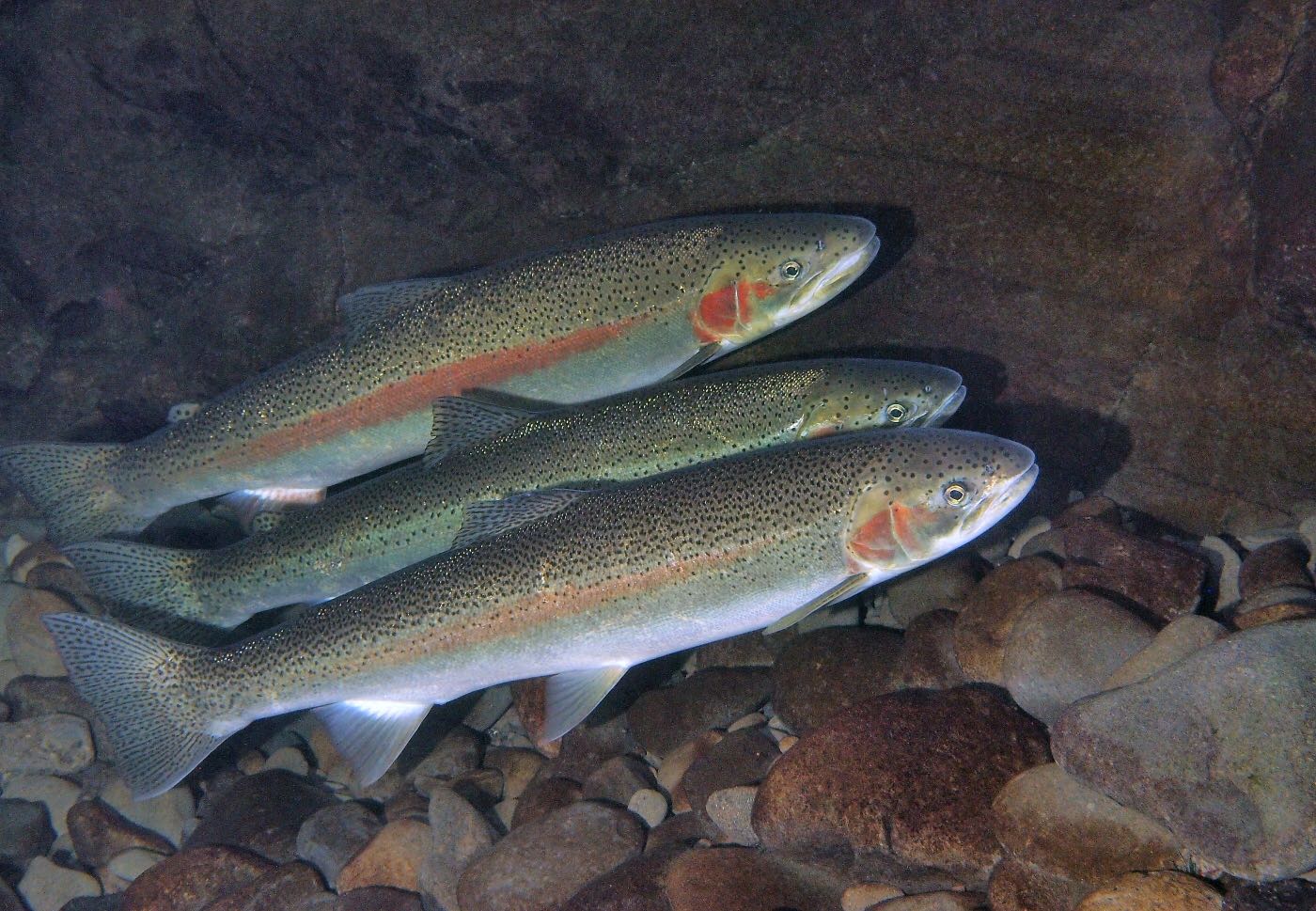 Two wild and one hatchery-farmed steelhead swim above a rocky seabed. The hatchery fish is missing a dorsal adipose fin — a small, nubby fin that should be near the tailfin on the top of its body. (Photo by John McMillan)

In August 2017, at least 263,000 farmed Atlantic salmon escaped from Cooke Aquaculture’s net pens at Washington’s Cypress Island into Washington state waters. The incident launched a legislated process to phase out nonnative finfish farming in Washington by 2025, and a $332,000 fine for Cooke Aquaculture, a Canadian multinational seafood company.

As Cooke sunsets its Atlantic salmon farming in the state, it has experienced at least two viral outbreaks impacting more than 1 million fish; and was fined for more water quality violations.

But not quite two years since the disaster, Cooke Aquaculture is exploring something that has put environmental activists on alert: the possibility of transitioning its remaining net pens to farm native steelhead trout.

An investigation led by three Washington state departments — Ecology, Natural Resources and Fish & Wildlife — found Cooke allowed one of three net pens at the Cypress Island facility to encrust with enough shellfish, seaweed and other marine life that it ultimately collapsed under its own weight.

The state considers the nonnative fish a pollutant once it escapes a net: They may compete with native fish for resources and can be vectors for both disease and parasites like sea lice, which are lethal to juvenile salmon. Crowded net pens, where farmed juveniles grow up in close proximity, are ideal breeding grounds for diseases that can transfer to wild fish migrating nearby.

A statewide Atlantic salmon recovery effort enlisted fishermen to catch as many fish as they could in the months after the net pen failure. The Lummi Nation, whose traditional fishing grounds are near Cypress Island, declared a state of emergency and captured tens of thousands of errant fish, but many escaped to the ocean.

Environmental groups such as the Wild Fish Conservancy contributed to journal studies showing some of those Atlantic salmon carried exotic diseases. Fishermen reported finding Atlantic salmon at least nine months after the collapse in places as far away as the Skagit River, but Fish & Wildlife officials said there was no evidence of invasive colonization in Washington river systems.

In addition to losing its Cypress Island lease, Cooke ultimately saw additional lease cancellations at facilities in Port Angeles after a state-led review. The company is fighting cancellations in Thurston County Superior Court. 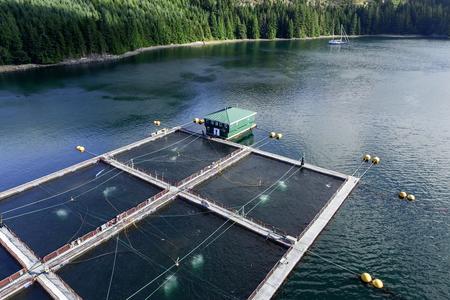 A recent escape in the San Juan Islands has raised new concerns about aquaculture on both sides of the U.S.-Canadian border. 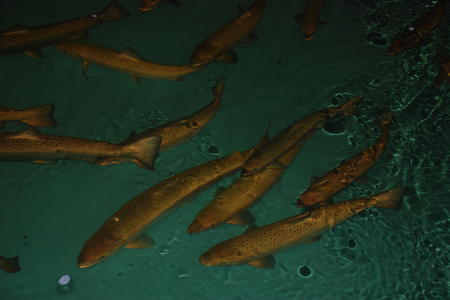 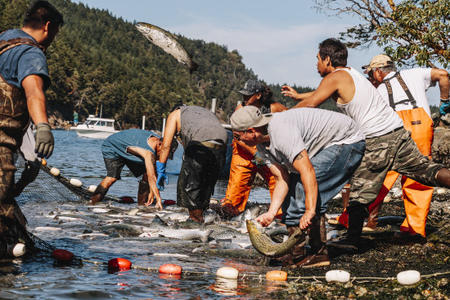 In response, the Lummi Nation joined environmental activists and politicians in advocating a ban on nonnative finfish farming in Washington state. The Legislature responded by banning new leases for the practice starting in 2022.

Cooke is still farming Atlantic salmon at its four remaining net pen facilities, though its existing leases expire in 2022. Until then, Washington is the only Western state with Atlantic salmon net pen farming, and Cooke is the only operator. In the meantime, Ecology is implementing new, more stringent water-quality permits for the four pens of Atlantic salmon as a safeguard until the phaseout is completed.

“They are beefed up and updated to reflect everything that we learned through that accident,” says Niewolny, the Ecology aquaculture specialist.

But Cooke plans to find a use for its facilities. And if nonnative finfish are off the table, locally sourced ones might be a way to stay in play.

In January 2019, Cooke sent Fish & Wildlife a marine aquaculture permit application to transition to production of steelhead, Washington’s state fish. Steelhead are the same species as rainbow trout, but they mature in the ocean and return to rivers to breed. They are often larger than river- and lake-dwelling rainbow trout.

“It is an approved farmed species for aquaculture in the state … [and there’s] growing market demand for sustainably farmed steelhead,” says Joel Richardson, Cooke’s vice president of public relations. The company employs approximately 60 full-time employees in Washington state. “They would like to stay employed,” Richardson says, “and we would like to continue to employ them. Jobs in rural Washington ... are fairly scarce, and these are full-time, year-round positions.”

The application lists all of Cooke's farms, including those with expired leases, say Ken Warheit, a Fish & Wildlife supervisor of fish health and molecular genetics laboratories.

“Right now, their plan, according to their permit application, is purchasing eggs from a local source” in Puget Sound, Warheit says. “These fish are supposed to be all females and sterile, so the logic is that if the fish do escape, they would not breed with our fish spawning in our rivers. So they are taking the precaution of making it more difficult for that negative effect to occur.”

Richardson confirmed that Cooke is planning to purchase eggs from Troutlodge, a Bonney Lake-based company that both Washington tribal nations and Fish & Wildlife use to stock lakes.

Environmental advocacy groups say it doesn’t matter where the fish originate: Farming fish, to their members' minds, makes them different animals with unique learned behaviors. Five of the state’s seven distinct populations of steelhead are endangered.

“Given the tenuous state of wild steelhead populations, the last thing our endangered State Fish needs is another threat to push them further down the path towards extinction,” Rich Simms, co-founder of Wild Steelhead Coalition, says in a public statement for the nonprofit.

Simms and his colleagues believe that beyond the potential to spread viruses and compete for resources, escaped farmed steelhead could interbreed with and dilute local steelhead stocks.

“When fishermen talk about a native run, [those are fish] uniquely adapted to a specific watershed,” says Chase Gunnell, communications director of Conservation Northwest, who sits on the Wild Steelhead Coalition’s board of directors with Simms. He says Cooke’s fish may “be a stock that is taken from some other watershed and raised in a facility, reared in a net pen.”

While Warheit says the fish are considered native if they originate in Washington state, he does acknowledge that because “they’re highly domesticated, there’s a possibility these animals would behave very differently than our wild steelhead.”

The Atlantic salmon recovered after 2017’s escape were found mostly with empty stomachs, suggesting an inability to hunt.

“There are concerns for both Atlantic salmon and steelhead and [advocates] may have a point, although certainly making steelhead to be infertile, sterile fish should mitigate some of those concerns,” Warheit says. “I don’t think it would eliminate concerns, but people should be mindful of that.”

“We need to consider what kinds of ecological interactions may occur between their fish and our fish,” Warheit adds. “There’s always concern about [things like] disease in terms of farmed fish. But we take precautions in terms of disease transfer.” That includes testing juveniles for disease before they’re transferred from freshwater to saltwater, he says. “We would do the same for steelhead, if they do get a permit.”

Crosscut reached out to the Lummi Nation and Northwest Indian Fisheries Commission for comment on Cooke possibly farming steelhead, but did not receive a response.

In order to receive a marine aquaculture permit, Cooke must submit additional information to state agencies for review. Fish & Wildlife will then put it through a State Environmental Protection Act [SEPA] process.

If Fish & Wildlife moves forward with Cooke, Ecology would then consider modifying the original water quality permits. “I would be looking at it from the operation of the farm itself, and how it impacts water quality. … So the species change, while we’re gonna track it, is not the primary focus for us,” Niewolny says.

“We’re going to consider their application under its own merits,” he says.

Warheit isn’t sure how long the environmental review at Fish & Wildlife, let alone the other state agencies involved, would take.

“The purpose of SEPA is, if a project hasn’t occurred in a certain place at a certain time, it’s by definition new,” Warheit says. He doesn’t know how long the SEPA process might take after Cooke finalizes its application, guessing anywhere from days to months.

Cooke notes that the state itself raises steelhead, but through a hatchery process called sea ranching, which doesn’t involve net penning.

“We have dozens and dozens of steelhead hatcheries where we spawn fish, hatch the eggs and raise the fish until a certain juvenile size, and then the fish are released into the environment,” where they mature at sea and return in one to three years, Warheit says.

While private rainbow trout aquaculture exists in the state, there is no exact precedent for what Cooke is attempting to do. The closest analog is Pacific Aquaculture, which raises rainbow trout in net pens in the Columbia River’s Rufus Woods Lake. “That is in freshwater, and way above many, many series of dams,” Warheit notes. There is nothing similar in Puget Sound.

“What Cooke is proposing right now is something that isn’t done in Washington, which is to raise the species in marine net pens for the entire duration of their grow out,” says Warheit. “No one is doing that in marine waters.”

Update: This article was updated at 9:54 a.m. August 5 to clarify the timeline of Cooke's Atlantic salmon phaseout.

A recent escape in the San Juan Islands has raised new concerns about aquaculture on both sides of the U.S.-Canadian border.