A plan to speed up the process of electrifying Metro's fleet of vehicles also calls for expanding the region's charging network and creating a pipeline for green jobs. 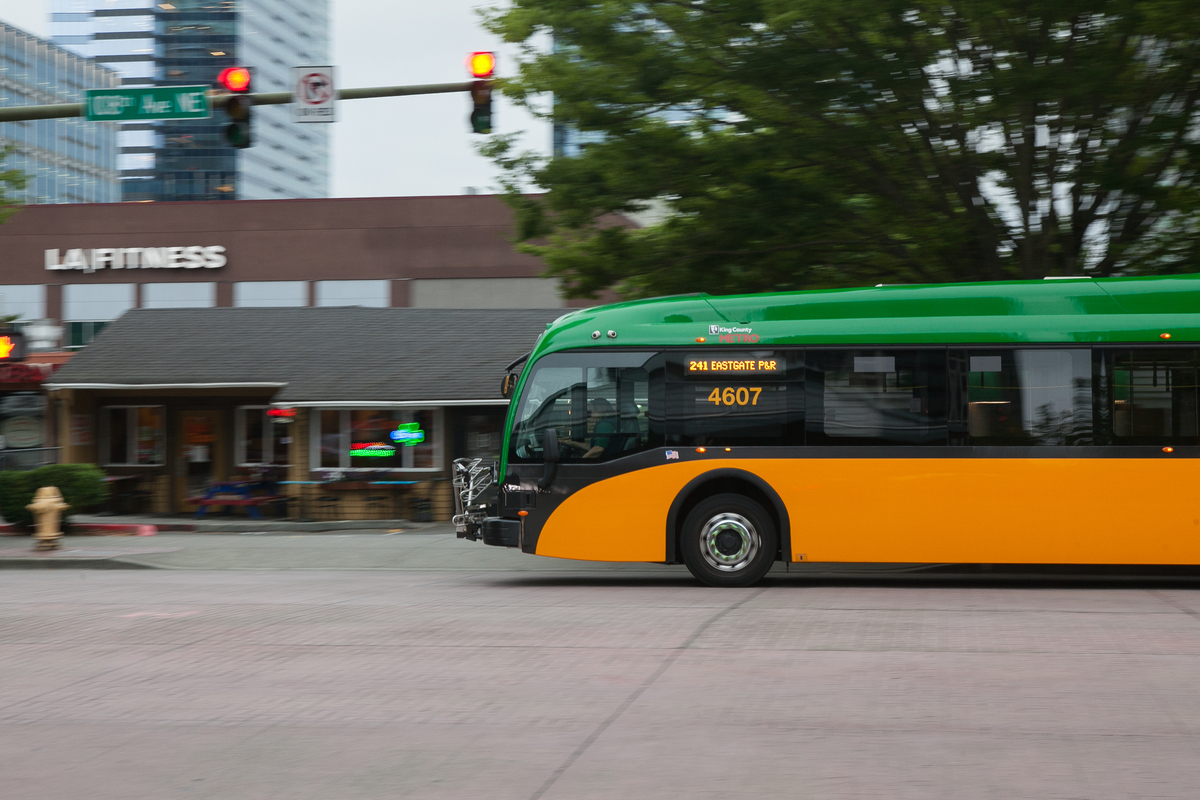 Back when King County first began to test electric buses in 2016, officials hoped to build a “zero-emission fleet” by 2040. But recent activism calling for aggressive measures to cut carbon emissions — especially from Indigenous demonstrators and students — has helped push forward proposed legislation that aims to accelerate that transition to 2035.

While King County Councilmember Jeanne Kohl-Welles says she and Councilmembers Rod Dembowski and Claudia Balducci have been crafting this proposal for some time, the recent marches and protests led by thousands in Washington and millions around the planet have hurried along the proposal's release. Today, the proposed legislation was referred to the county’s Mobility and Environment Committee, where discussions surrounding it will continue.

“Certainly with the large student walkout all over the globe, I was very moved by that,” Kohl-Welles says.

Along with an accelerated vehicle electrification date (which would include other county transport such as vans), the proposed legislation would expand King County’s electric vehicle charging network by 500%, add a requirement to consider access to electric vehicles when investing in affordable housing, improve the county’s pipeline toward green jobs and create a climate action toolkit that local jurisdictions can use to reduce emissions throughout the county.

Kohl-Welles says the 2035 deadline for these goals might be mostly aspirational for now — she says 2037 is more realistic — but she’s hoping for ideas that’ll make the transition happen as early as possible. A 2017 feasibility report on electrifying the bus system said that assuming the rapid development of electric technology continues, “Metro would commit to completing the transition to a zero-emission fleet by as early as 2034, or by 2040 at the latest, depending on technology requirements and other implementation considerations.”

“We don’t have that capacity at the current time, but we’re ambitious,” Kohl-Welles says. “We would like an expansion of our EV [electric vehicle] infrastructure.”

Going zero emissions takes several steps — and purchasing the electric vehicles themselves is only one of them. Currently, King County’s bus fleet includes 81 diesel buses, 1,287 diesel hybrids, 174 zero-emission electric trolley buses and 11 battery electric buses. County officials plan to retire carbon-emitting vehicles over time and will evaluate the cost of the expedited transition as they consider the legislation.

The county, alongside its plans to go electric, wants to increase bus ridership as well, further cutting emissions by replacing individual cars on the road.

“In 2015, we served around 400,000 daily riders and expect to exceed 1 million daily rides by 2040,” King County Metro spokesperson Torie Rynning said in an emailed statement.

Nationally, only a handful of major cities are attempting the transition towards electric public transportation (Chicago, New York and Philadelphia are examples). Cities that truly aim for zero-emissions status have much to consider beyond commissioning all-electric fleets and adding charging stations. Don MacKenzie, who leads the University of Washington’s Sustainable Transportation Lab, says city managers will have to pay attention to the sources of energy that charge those electric vehicles, too. While many assume that Washington’s hydropower guarantees a clean source of energy, MacKenzie says that it isn’t necessarily the case.

“When we create more demand for electricity, we don’t generate more hydropower,” he says. “There’s a fixed amount of hydropower being generated in North America and when we add more electricity demand, we’re seeking more sources that could be renewable or gas.”

To fully cut emissions, MacKenzie says the electrification of public transportation has limited impact. Pollution from county-owned transportation is second to that emitted by individual cars, suggesting that increasing ridership should be a bigger priority, he says.

“It’s not a reason not to [go electric],” MacKenzie says. “But you want to keep it in perspective; the fuel burned by the King County Metro fleet is a drop in the bucket.”

MacKenzie also worries about the eventual fate of the existing diesel fleet: Once retired, the choice to scrap, sell or otherwise dispose of them will factor into the city’s carbon footprint.

“Climate doesn’t care where the emissions come from, so if you export those emissions … it’s the same climate impact,” he says.

Hester Serebrin, policy director of the Transportation Choices Coalition,  echoed some of MacKenzie’s concerns about emissions beyond the vehicles themselves.

“We have heard from Indigenous communities of the impacts that hydro and dams have on their land and traditions,” she says by email. “I think being realistic about the capacity of our grid and continuing to be rigorous in interrogating the life-cycle impacts of  all of our transportation options should always be a part of these conversations.”

Kohl-Welles says this is an aspect the council members recognize and hope to investigate as a group during its evaluation of the legislation: “[King County Metro has] said it really doesn’t pay to try to sell off the buses to expedite this,” she says, so the issue is one that they’re “going to explore.”

Serebrin also said the switch could have local benefits beyond carbon reduction.

“While greenhouse gas emissions reductions are important, there are also localized benefits that could make a big difference for communities of color and those with low incomes, as localized noise and air pollution reductions will be the most salient in neighborhoods located near transit hubs or routes,” Serebrin says. “Reducing tailpipe emissions also helps reduce leaks that end up in the Puget Sound, harming our water, salmon and orcas.”

The proposed legislation has the support of five council members: Kohl-Welles, Dembowski and Balducci, as well as Larry Gossett and Joe McDermott.

“A lot of people have been working on this for a long time, and I’m really pleased that we’re going forward with this,” Kohl-Welles says. “I feel optimistic that we’ll get something through that’ll be meaningful.”