With orcas barely hanging on, Republican state Sen. Ann Rivers hopes to determine the viability of a state-funded chinook salmon hatchery in Bellingham. 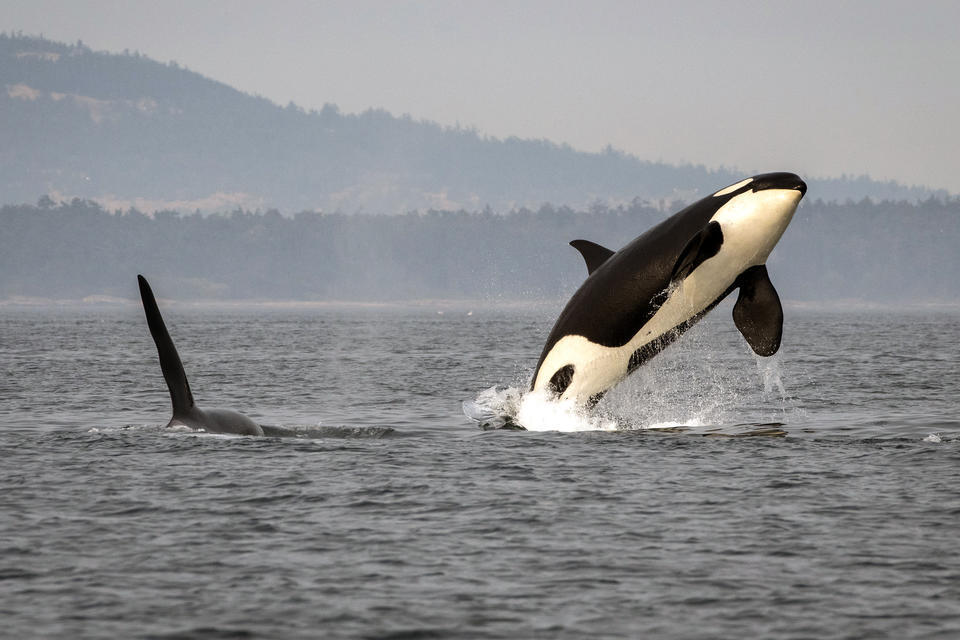 Killer whales and humans are some of the only species that experience menopause and have long post-reproductive lives. Older orca matriarchs pass on crucial knowledge to their pods. Here, an orca mother (J16/Slick) breaches, while her son (J26/Mike) swims nearby on Aug. 18, 2018. (Photo by Katy Foster/NOAA Fisheries)

A new type of chinook salmon hatchery is being proposed as part of a state effort to revive Puget Sound’s orca population.

State Sen. Ann Rivers, R-La Center, plans to introduce a bill this January calling for a $2.5 million study to determine the feasibility of a public-private hatchery in Bellingham. The hatchery would be constructed next to Whatcom Creek Hatchery, which is operated by Bellingham Technical College.

If the study supports the concept, then $40 million to $45 million more could be appropriated in 2021 to build the new hatchery.

The proposal ties in to state initiatives aimed at reviving the threatened Puget Sound orca population — currently at 73. Recent deaths among the pods that spend most of the year in and around the San Juan Islands drew public outcry and promises of state action to prevent the southern resident killer whales' extinction. A state task force hopes to increase the resident orca population to 84 in 10 years.

Orcas face threats from ship noise, stress from boats being too close and pollution. But a lack of chinook salmon is considered a key contributor to their apparent decline. While oceangoing orca eat seals and sea lions, chinook make up the bulk of the southern resident killer whales’ diet.

Hatchery-bred fish shore up Washington’s chinook fishery, a favorite of anglers and commercial fishermen, but their value to the orca is hotly contested. Orca appear to prefer wild-spawned salmon, which compete with hatchery fish for food and habitat.

More production from hatcheries is a major piece of a state task force’s late 2018 recommendations to support the orcas.

Earlier this year, the Legislature passed bills limiting the speeds and distances of vessels to create safe zones near killer whales. It also added $12.9 million in the 2019-2021 biennium to increase hatchery production by 19%, resulting in 24 million additional smolts annually, according to the Governor’s Office. The 2019-2021 capital budget allocated $40 million for improvements to state hatcheries, a 20% increase from the previous biennium.

Rivers’ proposed hatchery operation would release one-third of the smolts being released directly from Bellingham. Another third would be taken to a year-round stream in one of the San Juan Islands, where the smolts would be kept in net pens to imprint the young fish so they return to it as adults to spawn. The rest of the hatchery’s smolts would go through that same procedure elsewhere in the San Juans.

The idea is to spread the Whatcom Creek smolts and returning adults around Puget Sound so predators cannot concentrate on gobbling them up at one spot, Mike Hogan, Port of Bellingham public affairs director, said Tuesday during a forum held by the Mainstream Republicans of Washington in downtown Seattle. Rivers unveiled the bill at the forum; she hopes to gain bipartisan support.

San Juan Area Sea Life — a nonprofit coalition of local government, whale watching, commercial fishing and tribal interests — is the proposed private partner. The Lummi Nation has participated in discussions, but has not bought into the concept, said Doug Thomas of San Juan Area Sea Life.

Under the proposal, the private partner would keep and sell a share of the first-returning salmon to recover its costs and to fund the operation without state money. That would decrease the state’s financial burden of maintaining the hatchery, Thomas said.

“This is where we get the most bang for the buck. … We don’t have to rely on the Legislature to give us [all] the resources we need,” said Todd Myers of Washington Policy Center, a free market-oriented think tank based in Seattle.

Another new feature is that all of the smolts — not just some, as is the standard procedure — would be marked using different water temperatures to change their ear bones during incubation, so that they can be tracked.

If the proposed private-public hatchery works well, Rivers hopes that the concept is tried elsewhere in Washington.

Supporters of the proposal contend the Whatcom Creek system, with the additional hatchery, could eventually lead to the release of 40 million smolts,  with 800,000 to 1.6 million adults returning annually, a 2% to 4% return rate. The highest number of smolts leaving the Whatcom Creek area was 40 million in 1985, according to state figures.

“It’ll take a while to build up to that,” Rivers said.

Eric Kinne, hatcheries division director for the Washington Department of Fish and Wildlife, said the target 40 million smolts in 10 to 12 years is achievable if the program is managed well.

Rivers added that she expects changes to be made to her proposed bill as people look it over for the next few months. “My bill is a first draft,” she said.