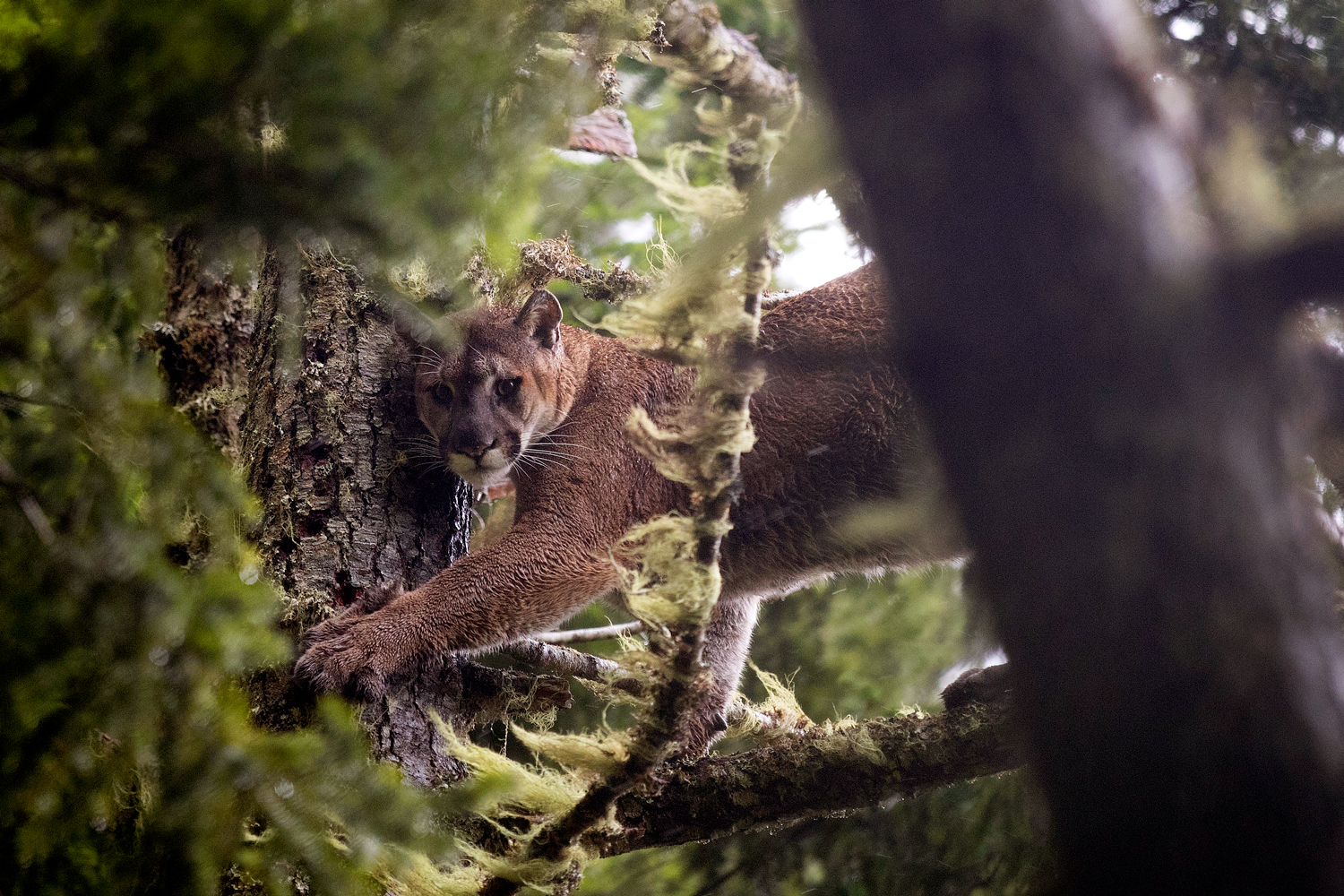 Moses is treed after hounds picked up his scent during a cougar capture mission on the Olympic Peninsula. (Megan Farmer/KUOW)

Vanessa Castle and her uncle, Sonny Sampson, laid their open palms on an anesthetized cougar’s chest. Their hands rose and fell with its breath, as rain fell on the lush coastal forest of the Olympic Peninsula in Washington state. Here, a research team is studying cougars by creating an alliance that transcends nations.

Both Castle and Sampson work for their tribe, the Lower Elwha Klallam Tribe, as natural resource technicians. Their tribe is part of the Olympic Cougar Project, a collaboration including Panthera, the global wild cat conservation organization, and the Jamestown S’Klallam, Lower Elwha Klallam, Makah, Port Gamble S’Klallam, and Skokomish Tribes, respectively. Panthera is leading the project, which is also utilizing cougar genetic data and cougar GPS collar location data from the state of Washington, along with remote camera images from the National Parks Service, to gain a fuller understanding of the local cougar population. The collaborative research team is working together across state and tribal jurisdictional boundaries to conserve cougars on the peninsula and develop research tools, including remote camera grid technology, which will allow participating tribes to estimate the abundance of cougars, deer, elk, and other species. The goals are to determine the cougar population to conserve it and to estimate how many deer and elk are in the tribes’ historic use area to ensure their ability to sustainably hunt them there and, in turn, strengthen the tribes’ food sovereignty.

The Olympic Cougar Project brings together Western science and traditional ecological knowledge for the benefit of wildlife, people and land. “It’s a banner project under which people can unite and work together,” said Dr. Mark Elbroch, puma program director at Panthera and one of the project’s leaders. “It’s a community approach as is rarely seen in the U.S.” As cougars prowl the secret places of the Elwha, partners of the Olympic Cougar Project work together to ensure the survival of their descendants.

Tribes here have been safeguarding the cougar and their environment for generations, said Joseph Pavel, a Skokomish Tribe member and director of the tribe’s Natural Resources Department. His tribe’s sustainable management and utilization of resources on their historic use area go back to time immemorial. “I think it will be certainly of significance to us beyond just an interest, but just to know the health of these animals — these cougars — and their populations,” he said. “They have a role in the environment, as does every animal, and we respect and honor that.”

Fitting cougars like the one the crew sedated in the coastal forest with a GPS collar will allow the group to monitor a cougar's movements and teach them about the peninsula’s cougar population. Using that information, they can determine whether young cougars are able to navigate across deadly highways and roads to connect with other cougars across the state. The stakes are increasingly high, Elbroch said, as the rapid development of the Interstate 5 corridor — one of the busiest interstates in the Pacific Northwest — has made it nearly impossible for cougars to migrate to and from the peninsula. The decrease in mobility threatens their long-term survival by isolating them from their mainland counterparts, which the collaborators suspect is the reason peninsula cougars exhibit less genetic diversity. Elbroch is concerned that this characteristic, if left unchecked, could eventually lead to inbreeding, affecting the persistence and health of the peninsula’s cougars. Elbroch and other partners of the project are using this data to inform migration models being developed by the Washington State Department of Transportation, which is working to ensure future transportation projects account for cougar connectivity.

Along with GPS movement data, researchers have enlisted dogs trained to seek out cougar scat by its scent. Along with their handlers, these “scat dogs” search predetermined areas, and when they locate a cougar’s droppings, the handler collects it. Genetic analysis of the samples helps to better understand the local cougar population. Additionally, the team of researchers is developing Panthera IDS, a computer program based on thousands of images taken from motion-sensing cameras across the peninsula. When completed, the program will allow the project partners to estimate how many individual cougars live in the area, as well as estimate how many deer and elk live there, informing sustainable hunting harvest practices for the tribes.

Growing up, Cameron Macias, a Lower Elwha Klallam Tribe member who is gathering this research into a Ph.D. dissertation at the University of Idaho, watched her tribe fight to remove two dams from the river's main stem. Following the dams' removal, Macias worked for the tribe studying how wildlife was recolonizing the former reservoir sites, an endeavor that came with great pride. She knows the research she is doing will not only help her people and the cougars today, “but also for future generations of tribal members,” whether they’re harvesting deer and elk or observing the animals there.

Like the crew in the forest, Macias hopes the partnership between tribes and researchers will strengthen the connection between the cougars, the environment and the people who also call the Olympic Peninsula home. As the crew left that rainy day, they contemplated a name for the cougar. They landed on “Moses,” the name of Castle and Sampson’s ancestor who lived and thrived with the Elwha before it was dammed.

The cougar Moses was also at home on the Elwha, his GPS collar revealed. After following the Elwha into the heart of the Olympic Mountains to the river’s source, the team’s motion-sensing cameras captured him eating an elk he killed where a reservoir used to be. He looked into the night and ripped a mouthful of meat from the carcass. The elk’s hooves bounced with each bite he took.

This story was originally produced for High Country News on June 22, 2020.

Rico Moore is an essayist, journalist, and poet. His book, The Tiny House that Flew, is forthcoming from Wolverine Farm Publishing. He lives in Fort Collins, Colorado, with his wife and cat.

Email High Country News at editor@hcn.org or submit a letter to the editor.