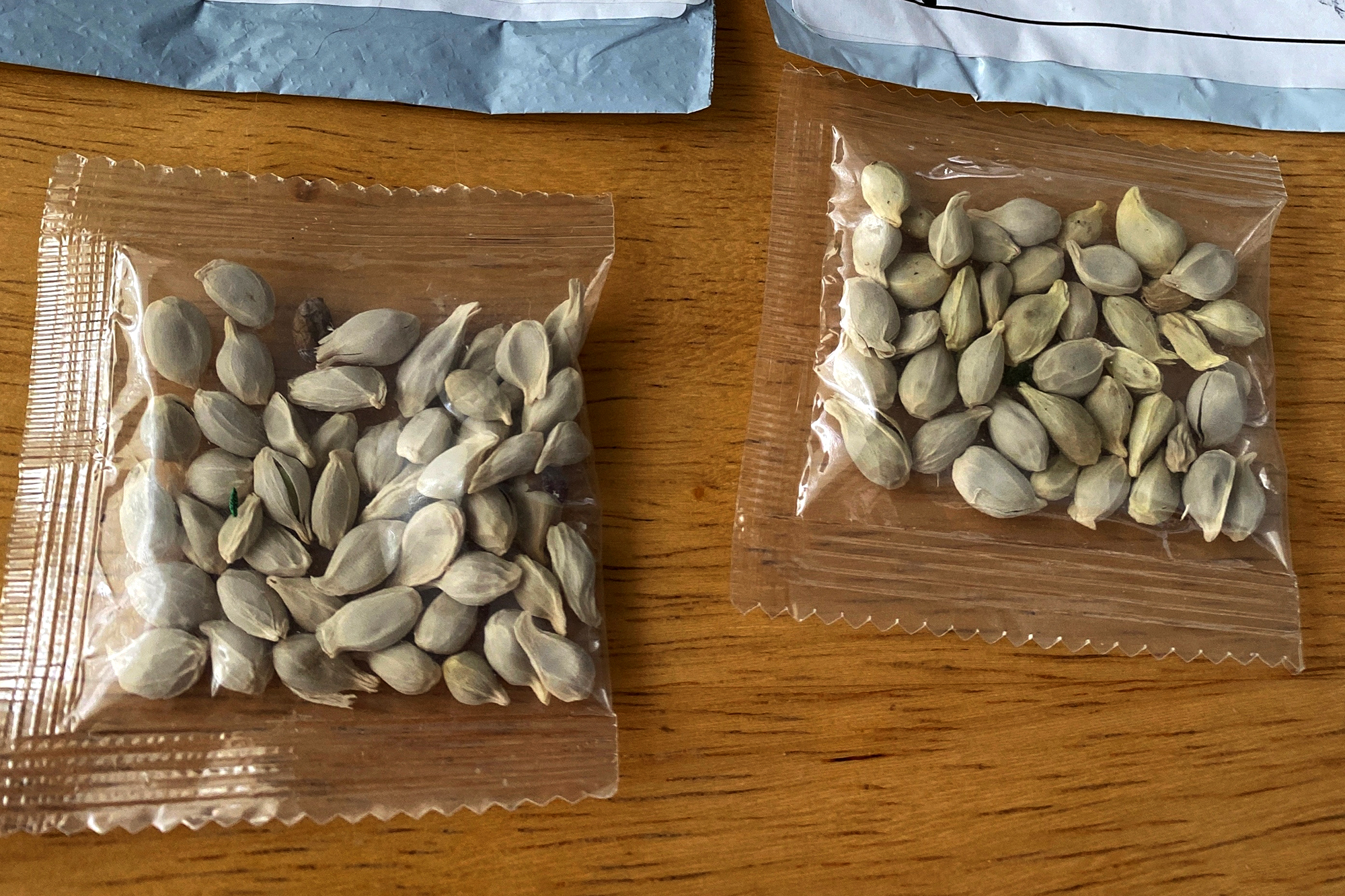 Packages of unidentified seeds have shown up in mailboxes across the nation, prompting state officials to advise recipients not to plant them. (Washington State Department of Agriculture)

When Washington resident Debbie S. received a delayed shipment of garden seeds a few months ago, she was not happy.

“There was no identification on the seed to know what I’m planting,” says Debbie, who asked that her last name be withheld. She noticed the package was labeled “jewelry” and appeared to have been shipped from China; she assumed the sender was trying to avoid customs. But the seeds looked like the pumpkin seeds she had ordered, so she tried to germinate them in small containers in her house. Nothing grew.

On Monday, she received two more packages of mystery seeds ⁠— about the same time that a relative posted on Facebook about mystery seed deliveries. Debbie realized she wasn’t alone.

The magnitude of the shipments ⁠— and the lack of information around their perpetrators’ intent, the seeds’ origin and whether they present threats to American plants ⁠— has exacerbated public concerns and sparked unfounded xenophobic conspiracy theories in Washington state and beyond.

“I'm concerned because I don't have a clue on what to believe. Am I safe? Is it a scam? What is going on? I can't get an answer,” Debbie says.

On July 24, the Washington State Department of Agriculture received two separate reports of people receiving seeds they had not ordered. The seeds appeared to be citrus seeds from China. In the days that followed, the agency’s Facebook post about the seeds was shared more than 661,000 times, and inundated with comments detailing similar experiences with multiple species of seeds shipped via China Post from within and beyond the state. The Department of Agriculture has received hundreds of reports as of Tuesday evening, says department spokesperson Karla Salp.

According to the U.S. Department of Agriculture, as of July 29, residents in at least 22 states, Canada, Australia and the United Kingdom have received mystery seeds. Recipients either ordered seeds from an online retailer and didn’t realize they would be shipped from overseas suppliers, or they received unsolicited packets of seeds (often labeled as jewelry) alongside unrelated products they ordered.

While the USDA hasn’t released the name of the online retailer in question, Salp said Tuesday that people reporting shipping incidents to them have specifically noted ordering from Amazon and Wish.com.

A New York Times article noted officials in at least 27 states have communicated warnings about the seed shipments.

The USDA, through its Animal and Plant Health Inspection Service (APHIS), is leading an investigation into the shipments alongside U.S. Customs and Border Patrol, which monitors foreign shipments, and other federal and state partner agencies. 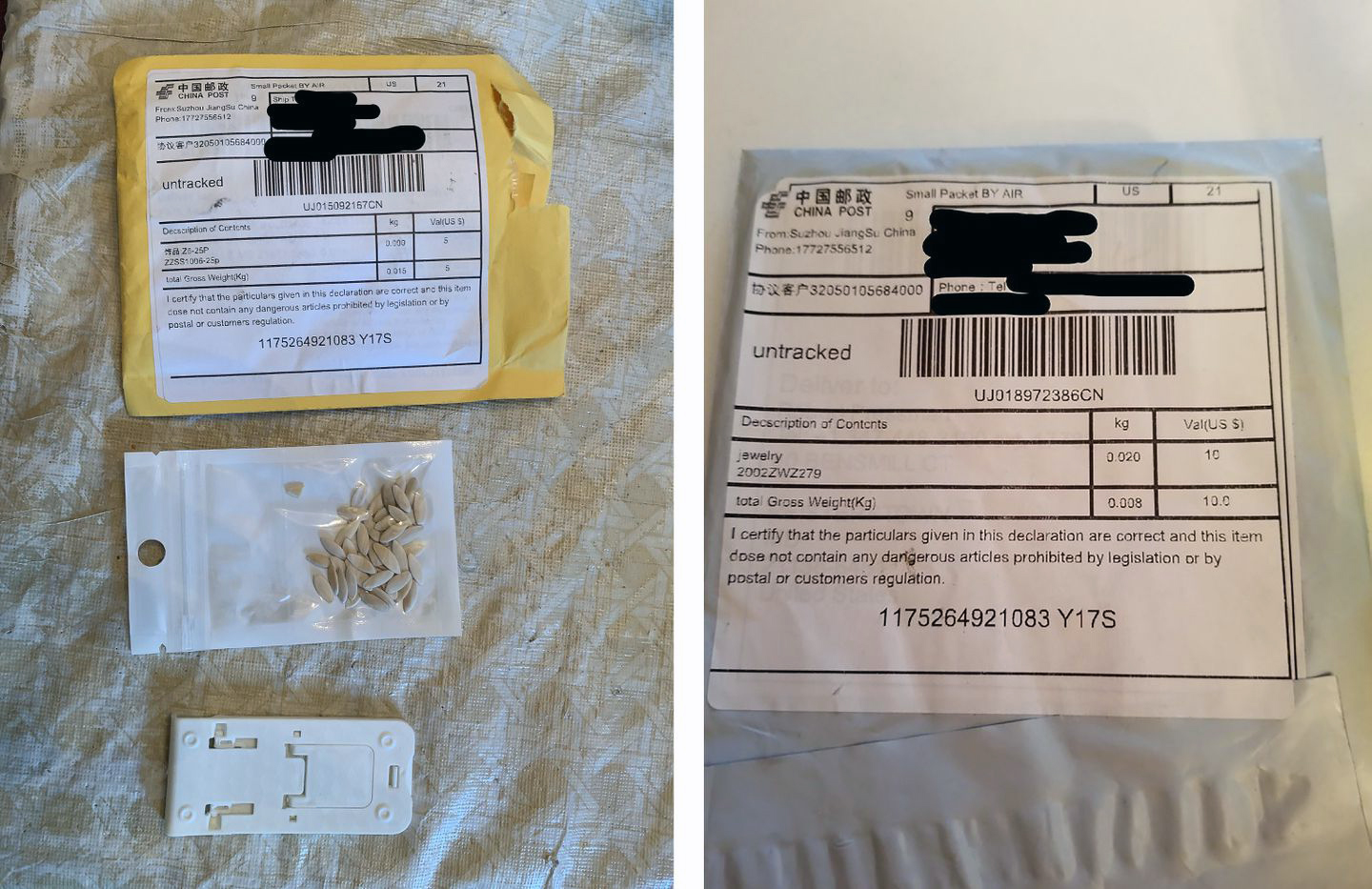 Packages addressed to U.S. locations and seemingly coming from China were collected on the East Coast as well, including in Maryland. (Maryland Department of Agriculture)

Packages addressed to U.S. locations and seemingly coming from China were collected on the East Coast as well, including in Maryland. (Maryland Department of Agriculture)

What danger do unlabeled seeds pose?

Plant and agriculture security professionals are concerned about mysterious shipments of seeds for a few reasons.

Washington state is home to a prolific and sensitive farming industry, which the introduction of unspecified seeds could threaten. If the plants are invasive or carry pests, they stand to outcompete or damage native plants and crops. They could also be toxic to animals.

“Those are concerns that are legitimate,” says Washington State University’s Dr. Lindsey J. du Toit, who has been a vegetable seed pathologist for two decades and is president of the American Phytopathological Society. Du Toit’s work helps Washington farmers avoid spreading pathogens to any of the approximately 90 countries the farmers ship to. The work also prevents Washington from taking in infected seeds. “Washington state … [is] very important to seed production,” she says.

“The difficulty is that folks can ship seeds into this country under the radar — and sometimes that's deliberate, sometimes it's just ignorant,” she says. “Talking to the [USDA] inspection facility at the Port of Seattle, they do catch a lot. But obviously, it's just the tip of the iceberg.”

While Washingtonians don’t frequently plant unsolicited seeds, state Department of Agriculture's Salp says it has happened. A bigger issue to her is when people order and plant seeds shipped in intentionally mislabeled mailers. “They are mislabeled so that they will get into the country without the necessary inspections to determine that they are pest-free,” she says. “Lots of those seeds are being planted because people ordered them.”

If these seeds are invasive or infectious, they can pose risks until they are properly disposed of. “It might survive and germinate, and then it starts to grow and no one knows about it,” du Toit says. “There's so much we don't know. And that means unknown risks.”

Salp says that based on posts she has seen on the state department's Facebook page, she worries some people might see all plants as harmless, and remain unaware of the dangers invasive species pose.

“I've had multiple friends contact me and say, ‘Oh, I was over in Europe and ... on vacation and I saw this amazing plant in someone's yard, and I got hold of some seed. Can I bring it back with me?’” du Toit says. “No, you cannot — you need to make sure that seed is clean. Not to be the Debbie Downer on people bringing seeds, but you hear about people doing this all the time.”

To date, neither the USDA nor the state Department of Agriculture has identified any of the sellers, and no one has publicly claimed responsibility for the shipments. Conspiracy theories about Chinese agricultural sabotage proliferate online, but the USDA’s leading theory is that they are part of a scam.

“At this time, we don’t have any evidence indicating this is something other than a ‘brushing scam,’ where people receive unsolicited items from a seller who then posts false customer reviews to boost sales,”  Cecilia Sequeira, spokesperson for APHIS, the USDA inspection service, said via email.

“Issues like this underscore the importance of purchasing from reputable companies within the United States — and a Washington business is even better,” says Salp.

What happens to the seeds?

Salp says her department has received photos of seeds, but no samples. However, the USDA and the state Department of Agriculture have instructions for people with mystery seeds.

“USDA is currently collecting seed packages from recipients and will test their contents and determine if they contain anything that could be of concern to U.S. agriculture or the environment,” Sequeira said. “USDA urges anyone who receives an unsolicited package of seeds to immediately contact their state plant regulatory official or APHIS state plant health director. Please hold on to the seeds and packaging, including the mailing label, until someone from your state department of agriculture or APHIS contacts you with further instructions. Do not plant seeds from unknown origins.”

While state department originally advised residents to double bag and dispose of the seeds, Salp said Wednesday that the USDA is now asking her department to collect the seed packets instead of disposing of them.

Debbie, who received three packages of seeds, followed the state Department of Agriculture's prior advice and put all of them in double zip-lock bags before disposing of them in the trash. (The state department notes that most seeds are viable for less than seven years and are unlikely to germinate in a landfill.)

A handful of people have asked the state what they should do with planted seeds. While the department initially advised people to dig up the seeds and dispose of them in the trash, the USDA’s new guidance asks people to leave them in the ground until they can coordinate with an APHIS representative.

But for now, much about the seeds’ origin and purpose will remain a mystery.

“Ours looked harmless enough, but it would be nice to know the reasoning why they were all sent out,” says Washington resident Ivy Warwick, who also received seed packets.

“I pray that the [state Department of Agriculture] knows that their direction is the right one. I'm concerned that no one has tested these seeds,” Debbie says, adding that in the future, she’ll do more research about items she orders on Amazon to “ensure I know more about the company I order from.” 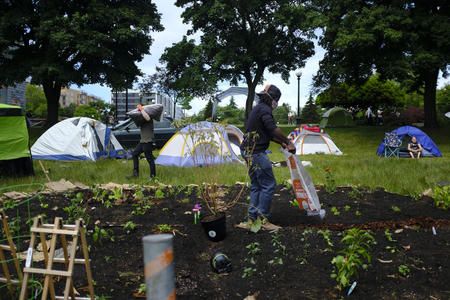 For 12 years, UW's Julian Olden has studied the native and invasive crayfish populations of Sammamish's Pine Lake. But the citizen scientists who live onshore are his secret weapon.

by / September 26 /
Article continues below

For 12 years, UW's Julian Olden has studied the native and invasive crayfish populations of Sammamish's Pine Lake. But the citizen scientists who live onshore are his secret weapon.

How a military career led this Seattle-area nurse to farming

Kayla McCarthy is trying to leave her home base better than she found it by creating community in a garden.