Ranchers in remote Douglas county retrofitted a brush truck to take firefighting into their own hands. But they still need more help. 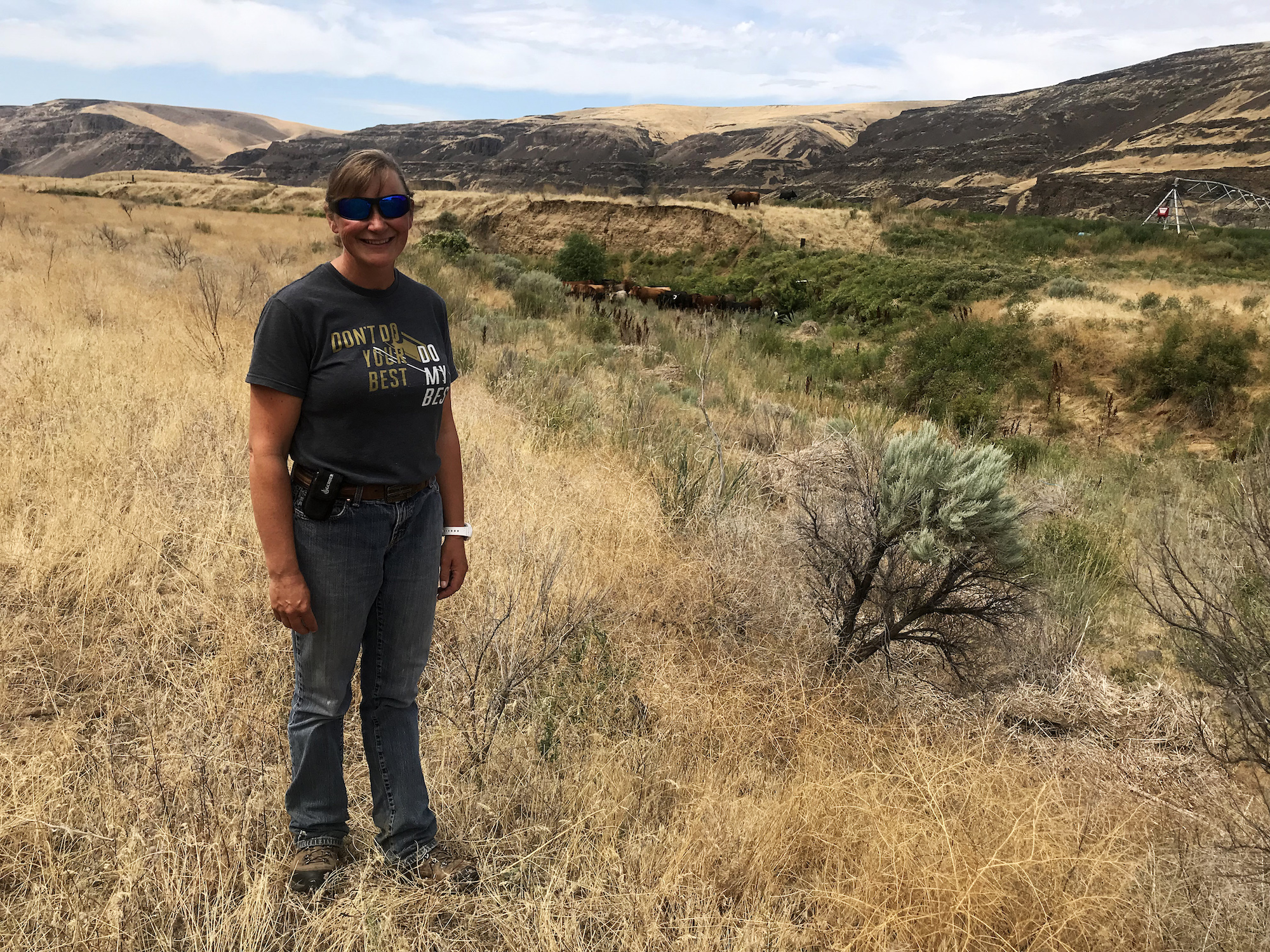 Central Washington rancher Molly Linville would like ranchers to be able to fight fires on their own property in the state. She hopes the state will allow ranchers to form rangeland fire protection associations in areas where no agency is assigned to respond to wildland fires. (Courtney Flatt/NWPB)

This year, Molly Linville and her husband David fixed up their truck. But it isn’t any old used vehicle. It’s meant to save lives and property.

At the end of the 2019 fire season, Linville scoped out the perfect surplus brush truck that would help them squash new fires on their ranch and at neighboring properties. Instead of hooking up hoses to irrigation lines, now they had wheels.

“(The truck) not only gives us, personally, some sense of ownership in our own fate, a little bit, but also, I think our neighbors feel a whole lot better in that there’s at least a little something that we can do,” Linville says.

That’s important to the people who live in central Washington’s Moses Coulee. Right now, no specific firefighting agency in this part of Douglas County is assigned to respond to fires on their small strip of land.

In the past, the area has been dubbed a “no man’s land,” where quick-burning brush fires can jump jurisdictional boundaries and cost millions of dollars if they get out of control. 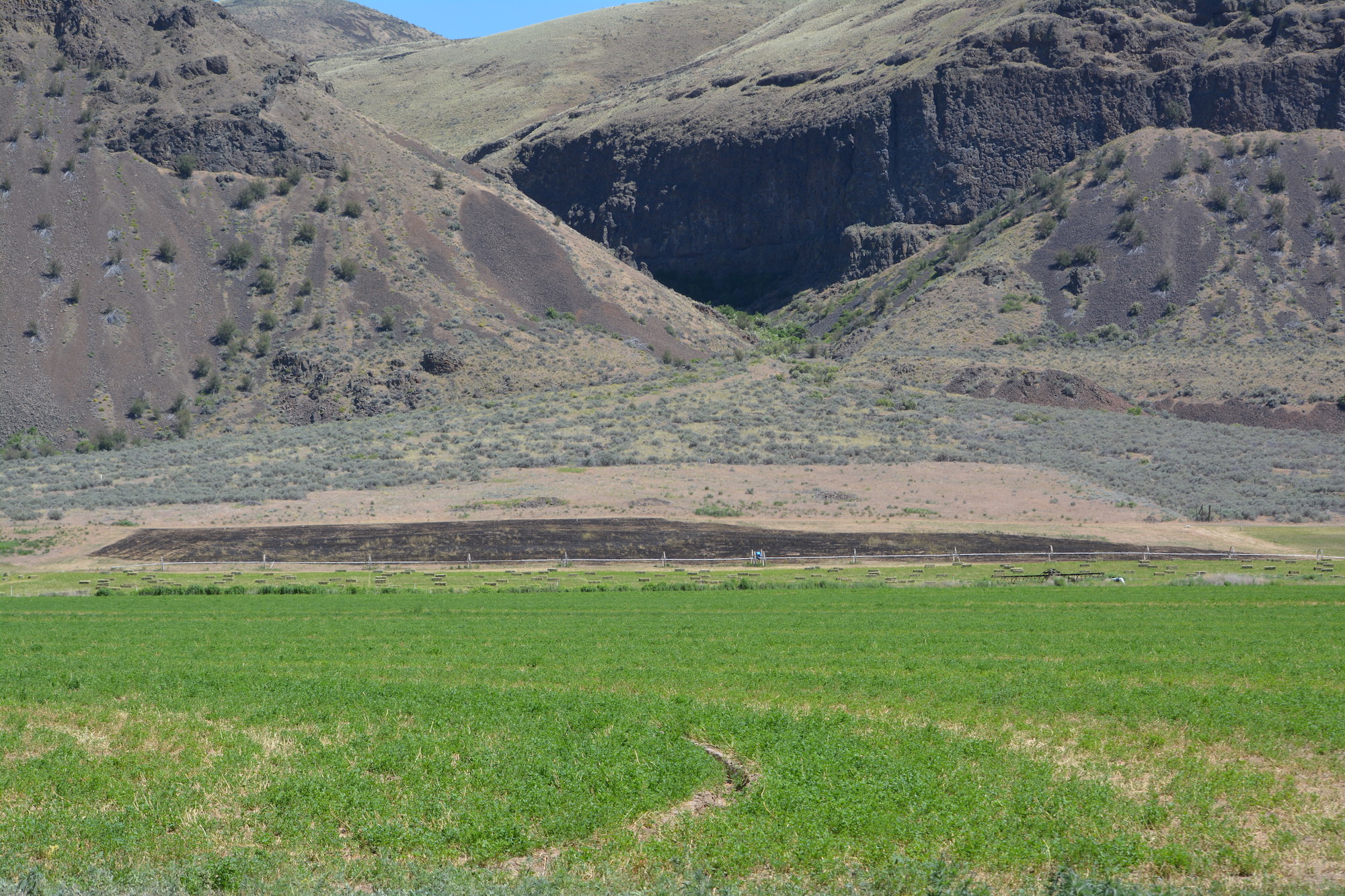 Molly and David Linville and their neighbors worked together to put out a small fire on May 28, 2020. They spotted the smoke and jumped in their fire truck to put it out quickly before it spread, just as an initial attack team would, Molly Linville said. (Molly Linville)

Molly and David Linville and their neighbors worked together to put out a small fire on May 28, 2020. They spotted the smoke and jumped in their fire truck to put it out quickly before it spread, just as an initial attack team would, Molly Linville said. (Molly Linville)

For some people, there are advantages to living in an unprotected area. For one, they don’t have to pay taxes into a fire district or timber taxes to the state.

In 2017, the Sutherland Canyon Fire ripped through this valley, burning more than 27,000 acres and destroying the Linville’s fences and surrounding ranchland.

“I don’t want to overblow it, but it was (like) Dante’s Inferno. Fifty-foot flame lengths. It was going so fast, it was shocking,” Molly Linville said in an earlier interview.

Fire starts in this dry coulee are something neighbors are used to, says Sarah Hale, who lives in the area. Before the truck, neighbors could dig fire lines with tractors, shovels or sometimes dozers. But that’s all they could really do.

“Any time there’s been a fire or somebody sees smoke, we usually try to contact neighbors and check on people,” Hale says. “Most everybody out here wants to help each other. We’re willing to do things, and we’re hard workers. Going out there and digging fire lines and helping put out fires on our neighbor’s property is something we want to do.”

Linville wants to act as an initial attack team just for her small area in Douglas County, helping douse the flames until official fire crews arrive. Hale points out that they know the terrain and are 10 to 15 minutes from neighbors. It can take responding fire crews much longer.

“Having people on the ground that are willing and know the area, it makes a big difference,” Hale says.

Racing to put out fires

When fires ignite, the Bureau of Land Management will race to put them out, BLM fire management officer Jeff Dimke says.

Dimke says he pushed for the federal public lands agency to respond to fires in the Palisades, the nearby unincorporated community in the area. He said it’s the right thing to do when fires threaten peoples’ livelihoods. Fires in the area could also quickly spread and jump to other property.

“We’re just trying to provide the best service that we can,” Dimke says. “I think we’re doing that efficiently, currently. It’d be nice for us if we weren’t the ones being on the hook for it. I think we’re still giving the taxpayers the best coverage that we can, given the circumstances that we’re dealing with.”

Dimke says that when the BLM takes the fires, the federal Department of Interior pays the bill.

“A better resolution to that would be nice. As far as some kind of policy and/or legislation, it would be nice for us to be able to support some of that,” Dimke says. “I don’t see it changing our role any because those fires would be a threat to BLM land, and it wouldn’t really change much of our response.”

'Still just hanging out to dry'

Better resolution could come in the form of the Washington state Department of Natural Resources (DNR) or a local fire district absorbing the current “no man’s land” area. It could also come from the landowners, who would like to form rangeland fire protection associations.

To form an RFPA, “the problem you run into, if you look at the number of people out there, and look at, could they even do something like that and be able to financially support it, and provide the manpower to do it?” Chuck Turley, wildfire division manager with the state DNR, says. “That would be a very difficult thing for them to do.”

But Molly Linville in Moses Coulee says it’s not so tough. She’s already organizing the informal group in her community. Rangeland fire protection associations have worked well in Oregon and Idaho, where RFPAs have kept hundreds of fires small enough that they don’t damage property or threaten lives. Oregon’s first RFPA was formed in 1964.

The idea has had trouble gaining traction in the Washington legislature. Earlier bills to recognize RFPAs have stalled in committees. Linville said they’ll push for another shot at a bill in the 2021 legislative session.

“It’s sort of frustrating that we have to do this on our own,” Linville said. “In the meantime, we’re still just hanging out to dry a little bit.” 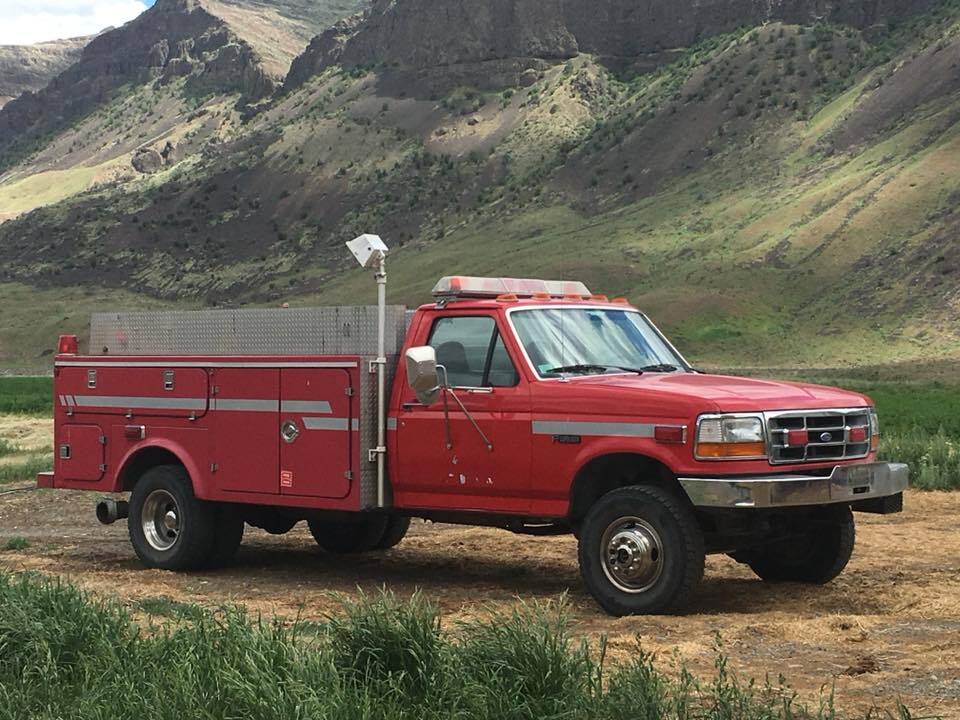 Molly and David Linville purchased a brush truck to fight fires on their ranch and their neighbors’ land in Douglas County, Washington. They live in the Moses Coulee area, where no agency is assigned to respond to fires that spark there. (Molly Linville)

Molly and David Linville purchased a brush truck to fight fires on their ranch and their neighbors’ land in Douglas County, Washington. They live in the Moses Coulee area, where no agency is assigned to respond to fires that spark there. (Molly Linville)

Enter the residents’ brush truck. So far this season, they’ve acted as an initial attack force for three fires.

“We’ve had a couple of these, ‘Oh, we see a smoke plume.’ And we zip out there – we’re on it, and our neighbors are there, too,” Linville says. “That’s basically what an RFPA does. We’re organized.”

For other fires, they’ve hung back. When the recent Coulee Meadows Fire began on nearby protected land, Linville said they just sprayed down their property and watched the wind – prepared but not in the way of the professional crews.

“What we’re hoping for is that if we act responsibly, and these agencies see we can get on the fires really quickly, and that we do it well, that that’ll be some proof that we can do this whole RFPA thing and make it legal in the state,” Linville says.

The BLM’s Jeff Dimke worries that the group hasn’t received training. Without training and proper equipment, he says it’s a liability.

“It’s a risk to them, but they can do that. It’s their property. For the most part, people are going to deal with things that they can handle anyway. People have been doing that for generations,” Dimke says. “That’s where my family came from – growing up on a farm and being out in the middle of nowhere. Nobody was going to come to help you, so you figured out how to do it.”

Linville had planned to kick off some training this season for their neighbors at the local grange. They’d learn how to use the pump and water system and receive “rudimentary training.” But the coronavirus pandemic put those plans on hold.

She and her husband have gone through red card training, a certification wildland firefighters receive before they head to the fire lines. They’ve still got a lot of their protective gear and have received some under-the-table gear donations for others, like the yellow Nomex jumpsuits fire crews wear.

Linville says that if they were part of an official RFPA, they could receive surplus equipment from fire departments instead of purchasing it out-of-pocket. The brush truck cost around $6,200, including new hoses and fittings. The license and insurance run about $1,200 each year.

They fill the truck with irrigation water and are able to lay out 300-feet of hoses.

Linville plans to continue acquiring more gear until they are fully outfitted. Next on the list: radios.

For now, Linville says the fire truck has helped bring the community together. One neighbor offered to help with maintenance, another electrical repairs, another paid for gas.

“It’s building that sense of community when people are doing things like that,” she says. “And it’s really cool.”

This article was first published at Northwest Public Broadcasting on August 18, 2020.