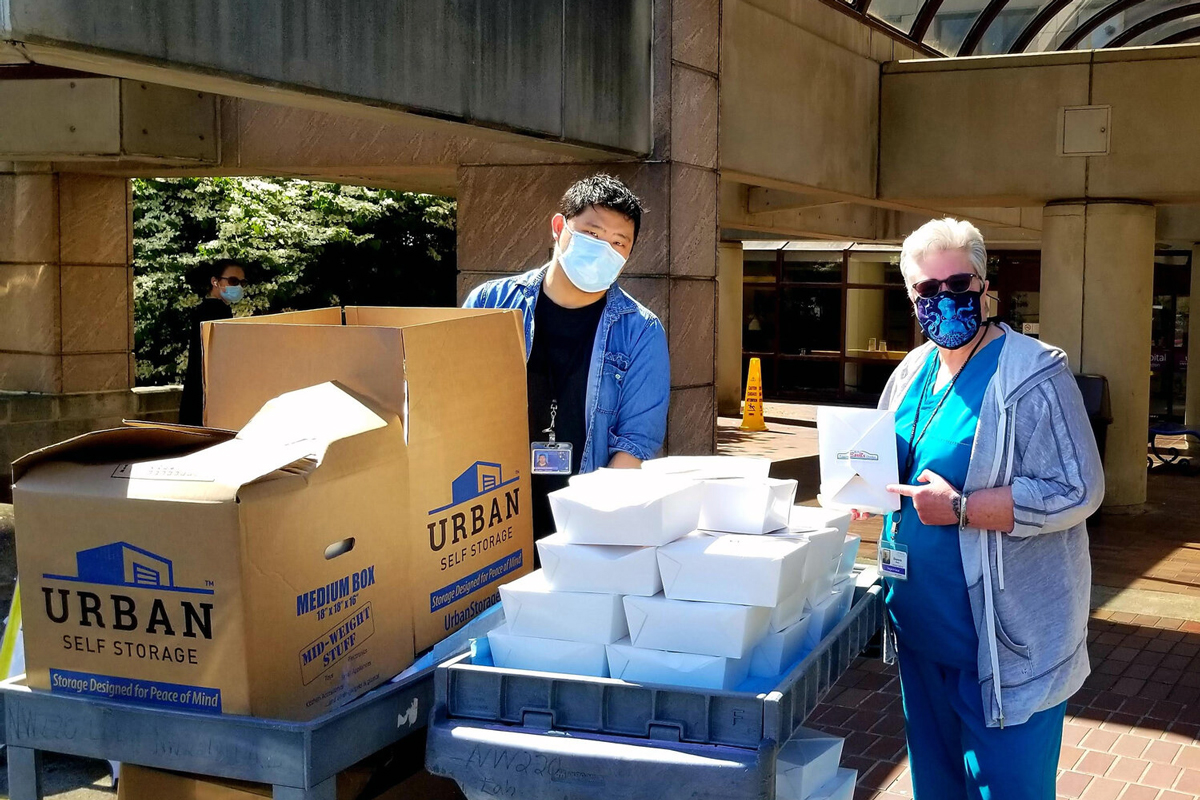 Ezell's Famous Chicken donated 95 lunches to feed University of Washington Specimen Processing Services. The lab workers prepare samples for COVID-19 and other lab tests. In April, We Got This Seattle fed 6,851 people through meal donations. (We Got This Seattle)

In early March, during the first days of the pandemic, people across the country were glued to the news, eager for the latest updates from hospitals and research labs. Ellen Kuwana, a science communicator in Seattle, read about the scientists working overtime to process COVID-19 tests at the University of Washington’s virology lab. The researchers worked around the clock and, with restaurants closing to comply with shutdown orders, the scientists often went hours without eating. When Kuwana stopped by with a bunch of pizzas, they were thrilled.

That pizza delivery whetted Kuwana’s appetite to help and became the first of hundreds she’s made for We Got This Seattle, a nonprofit organization that uses donations to purchase food from local restaurants for frontline workers. The group has delivered 18,000 meals to grocery stores, homeless shelters, fire stations and nonprofit organizations — and the virology lab, which it still supports.

“Ellen was the first person to realize that was happening,” said Lisa Rider, the lab’s program coordinator. “I have seen people cheer up when receiving a food donation, talking about how our community reached out and supported us. That’s so meaningful, to feel like we are appreciated.”

Nearly six months into the pandemic, Kuwana continues to bring food to workers across town, though the pace has slowed as donors and volunteers focus on other emergencies, such as systemic racism and voter suppression. High Country News caught up with Kuwana between deliveries in late August to ask about We Got This Seattle’s origins and her plans for the future.

Where did the idea for We Got This Seattle come from?

As a science writer, I’m on Twitter way too much. As the first cases appeared in Seattle, it quickly became evident we were going to become the epicenter. I learned that UW virology was running COVID-19 tests, and there was a tweet about a local restaurant giving 10% off to health care workers. So I thought, “Why don’t I spend a couple hundred dollars and get pizza delivered to UW virology, just as a token of appreciation?” I thought, ”If I get sick, I don’t want to just have sat home and done nothing.”

So on March 13, I ordered pizza (from Pagliacci Pizza) and the manager said, “We’re going to donate it.” I looked at the receipt, and it would’ve been $500! Once Pagliacci donated, I decided to call another businesses and tell them what I was doing — and it very quickly became apparent that restaurants were struggling, too, so I ended up putting out a call to friends on Facebook to donate if they wanted to support the effort. I was floored by the response; you could watch the numbers tick upwards in real time. Within 24 hours, I had $1,000, and when we hit $35,000, I founded a 501(c)(3). I was particularly touched by the $5 donations. It just spoke to people really wanting to do something. 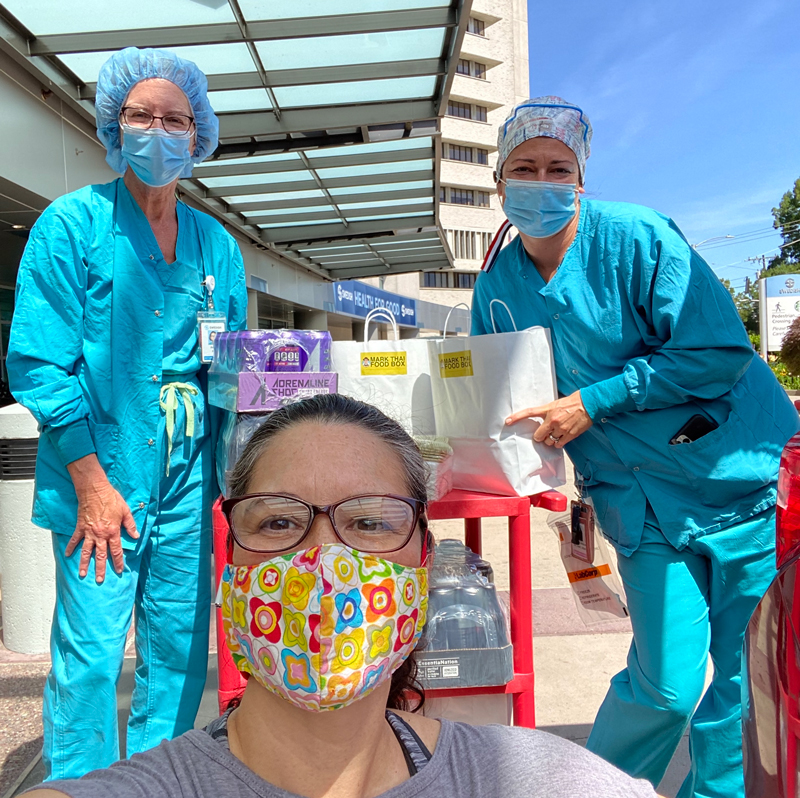 Ellen Kuwana poses for a selfie with Swedish Medical Center staff. (We Got This Seattle)

Ellen Kuwana poses for a selfie with Swedish Medical Center staff. (We Got This Seattle)

How did you go about ordering food from restaurants and dropping off donations?

At first, I had a paper calendar to track the meals we were delivering. I’d call up restaurants and ask, “What do you need to charge me?” I asked them to prepare comfort food: noodles, rice and curry. It doesn’t have to be the most gourmet thing, but it can’t be a chunk of chicken they need to cut with a knife and fork, since most people are holding the box with one hand, eating on their feet. And nothing too garlicky, since people are often wearing masks all day.

A lot of people offered to deliver food, but I was initially hesitant, because there is a small amount of risk — I was willing to take that on for myself, but hesitant to tell anyone else to take it on. I coached people that any time they got out of their car and got back in, they should Purell their hands and not go into any restaurants, and I’d arrange for the restaurant to come out and put things in the trunk.

So some deliveries were made by me, and some were other drivers. In the last two weeks of March, we fed 1,431 people; in April, we fed 6,851 people, and were sometimes doing eight deliveries a day. Most nights, I was up until 1 or 2 a.m. coordinating deliveries. I had a full-time job (in communications) up until April 10, but I ended up quitting. There’s nothing like a global pandemic to bring your priorities into focus.

Have there been any moments that have stuck with you?

There are so many. One day, I called Community Health’s mental health services and said, “Hi, I’m Ellen, I started this organization, can I give you all a lunch someday?” There was a pause, and I was wondering, did I get cut off? The person who answered the phone was crying and trying to compose herself. She said, “Oh my gosh, I’ve had such a rough day, we’re all just working so hard and that is amazing.” It just gets back to showing people they’re appreciated, and food is a very basic thing. It’s an easy way to take care of people.

So many projects from the beginning of the pandemic have fizzled. How have you kept things going all these months?

I won’t lie; there have been a few times I’ve thought about stopping. I’ve had two flat tires from all the driving around. Sometimes I’ve had to wait outside a hospital for 45 minutes because they’re in the middle of an emergency. And the more you’re out and about, the more you’re potentially in dangerous situations. One night, after a drop-off, I offered some police officers cookies and they said, “Ma’am, we’re in the middle of an armed robbery, so you need to get back into your car.”

It’s always a struggle during any time to keep going. As a mom, I’m sometimes the last thing I take care of. It’s a stressful time, and it’s important to know you’re not alone; Twitter has been amazing for that. One day, I broke my favorite wine glass and just started crying. I tweeted about it, and someone across the country said, “I want to buy you a new wine glass.” I had to tell myself to accept the help.

I’ve also had to give myself permission to slow down. We took a week off (in July) and stayed at a friend’s cabin and got outside every day. It was like taking a long cold drink after being out in the desert. We went on a 10-mile hike, which I’d never done before. It was a nice parallel with this project: If I had to do it by myself, I don’t think I could’ve done it. But my kids were there, and I said, “OK, no matter the pace, just keep going.” 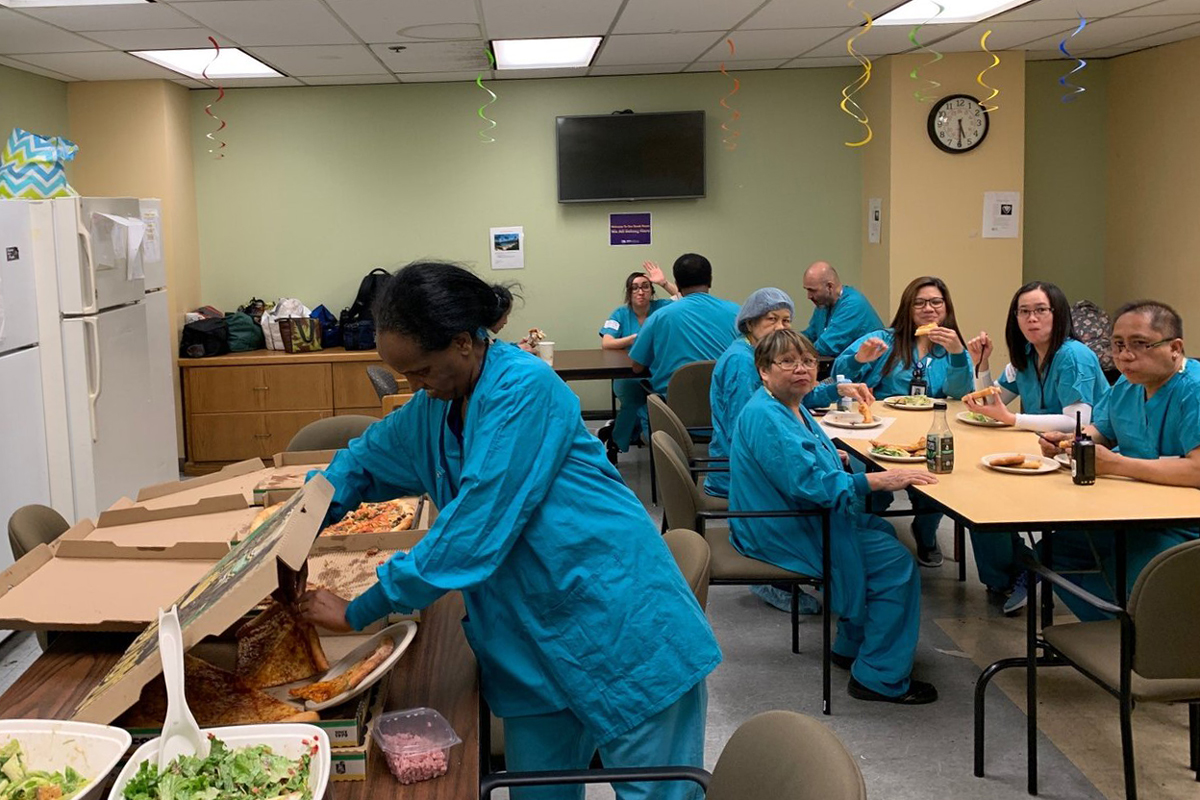 The Environmental Services staff of Swedish Medical Center, Seattle, takes a break to eat a donated meal from Pagliacci Pizza on April 1, 2020, which was when COVID-19 deaths were highest in King County. (We Got This Seattle)

The Environmental Services staff of Swedish Medical Center, Seattle, takes a break to eat a donated meal from Pagliacci Pizza on April 1, 2020, which was when COVID-19 deaths were highest in King County. (We Got This Seattle)

Has the pace of deliveries changed over these last few months?

Things have kind of tapered off. March through May was our peak; we were doing on average three or four deliveries a day. In June, I was tired; some days we didn’t have any deliveries, and we were doing maybe eight deliveries a week. I gave myself August “off,” but I’m still delivering cookies and coffee; I’m just not actively seeking out new sites, or ordering a lot of food. Part of that was to give myself time to catch up on paperwork. I have definitely slowed down because I have to realize that it’s taking a toll on me, and on my family, and I can’t do it all.

What’s next for We Got This Seattle?

Part of my August off is to ponder my next steps. A lot of us are really concerned about COVID spread in late fall and winter, and if We Got This Seattle is going to be active in the winter — if things get bad again — then I would probably need another $100,000 in support. That would be a lot of work and energy.

What might you say to people looking to make a difference in their community?

If you don’t have a similar program already, call your favorite restaurant and see if they would charge you for meals. Ask a few friends for help, and then call your local medical clinic or grocery store, and make a donation to say thanks. Or if you have kids, ask them to draw pictures and thank-you notes for health care providers. I see them hanging on the bulletin board in labs during my deliveries.

It sounds trite to say one person can make a difference, and it wasn’t just me — I’ve had so much help, and that has really helped to keep me going — but you can really brighten someone’s day.

This article was first published at High Country News on Sept. 2, 2020.