Fewer than 300 wolverines are left in the PNW. Why aren’t they endangered?

Citing climate threats, conservation groups vow to challenge the U.S. Fish and Wildlife’s decision not to add wolverines to the Endangered Species List. 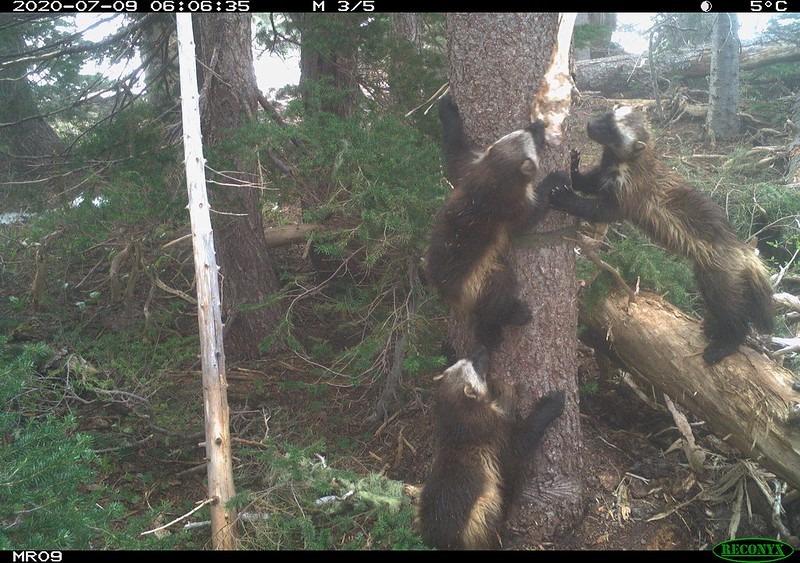 A mother wolverine and her kits were successfully captured on webcams in Mount Rainier National Park this spring and summer. Hikers in the park confirmed a sighting of their own earlier this month. (National Park Service/Flickr)

Conservation groups are vowing to again challenge the U.S. Fish and Wildlife’s decision not to add wolverines to the Endangered Species List. The groups say wolverines are iconic species in high mountain snowy habitat, which is greatly threatened by climate change.

Ten conservation groups had requested the federal government to list the elusive predators.

There are likely fewer than 300 wolverines in their habitat across the Mountain West, which includes populations in Washington, Idaho and Oregon, where 90% of their habitat is on federally managed lands and wilderness areas.

“It would mean better planning, better consideration and — in some places — reducing the threats that are putting the wolverine at risk of extinction,” Werntz said.

Wolverines depend on remote, snowy habitat to burrow dens in the springtime. Climate change projections show that breeding habitat is at risk, according to Timothy Preso, an attorney with environmental advocacy group Earthjustice.

“Literally, the wolverines’ snowy habitat is melting away. There are things that can be done, short of stopping climate change, to help the wolverine,” Preso said.

One example is working on reintroduction efforts in areas that appear likely to stay snowy. Preso said those types of recovery efforts have been “held up” by the lack of federal protections.

Even though wolverines are known for their ferocity in the wildlife world, they’re greatly impacted by human disturbance — activities such as roads, forestry practices and snowmobile use.

The bearlike members of the weasel family are also threatened because their numbers are mainly in small, scattered populations. That means, if disease or some other natural disaster were to strike, it could wipe out large sections of the remaining wolverines, Werntz says.

In Oregon, wolverines are listed as a threatened species. A few years ago, a wolverine was spotted in the Wallowa Mountains in the northeastern part of the state.

“What I think that indicates is that if we give the wolverine a chance and lend them a hand, they can recover. They are incredibly resilient, and they are very tough. But they need some help to ensure that they have a future in this country,” Werntz said.

In Washington state, wolverines are candidates to be listed as threatened. A wolverine mother and her kits were recently spotted at Mount Rainier National Park. Biologists hope that wildlife crossings and underpasses wil allow wolverines to travel from the state’s North Cascades to other habitat further south in the Cascades.

This wasn’t the first time wolverines were spotted in Washington’s southern Cascades. But researchers haven’t seen signs of the first wolverines in the area in years.

In Idaho, wolverines are listed as an “Idaho Species of Greatest Conservation Need.” Idaho’s Fish and Game Department said a threatened status is not warranted because there is “the high level of uncertainty related to climate change effects on wolverines and their habitat.”

Wolverines were pushed toward extinction by the early 1900s from trapping and baiting for other predators. Trapping is still allowed in Canada. When conservation groups began petitioning to list wolverines, Montana still allowed anyone to trap one wolverine, according to Preso, the Earthjustice attorney. That is no longer the case, but he worries trapping could resume in Montana.

Conservation groups first filed a petition to add wolverines to the federal Endangered Species List in 2000. In April 2016, a judge ruled the federal government had to make a decision about the wolverines’ status, but didn’t set a deadline. The groups sued again in March 2020.

Now, the U.S. Fish and Wildlife Service said threats to wolverines aren’t as significant as scientists believed in 2013, when it proposed to list wolverines as threatened. In a news release, the service said wolverine populations “remain stable.”

“In the time since our original proposal, the science on wolverine [sic] has been greatly advanced, thanks to the work of state wildlife agencies and researchers in the U.S. and around the world,” Noreen Walsh, regional director with the service, said in a statement.

Preso says that reasoning doesn’t track. He points to other species protected under the Endangered Species Act that also have northern populations, such as bald eagles, grizzly bears and gray wolves.

“I don’taaidthink most Americans want a future in which we are fine with writing off wildlife in the lower 48 because they still exist in Alaska,” Preso said. “That’s certainly not the vision that was enacted into law in the Endangered Species Act.”

He said the pushback against listing the wolverine under the Endangered Species Act stems from the national debate over climate change. Peer-reviewed studies show that 97% of actively publishing scientists agree that the warming climate is extremely likely caused by human activities.

Other species won’t fare well with climate change, from Canada Lynx also losing snowy habitat to coral facing bleaching, he said. That lack of acknowledgement is contributing to a worldwide wave of biodiversity loss, Preso said, which a United Nations report has called “unprecedented.”

Conservation Northwest’s Werntz said the Trump administration is “giving up and walking away from protecting the wolverine.”

Conservation groups said wolverine populations are indeed in trouble, and will remain so decades into the future, as climate change threatens these high-elevation, snowy areas. That’s why Werntz believes it’s important to protect them now.

“When you protect the wolverine, you’re literally protecting that high country ecosystem and all of the plants and animals that depend on it,” he said.