Critics say a 116-year-old dam on the Puyallup River is a threat to already vulnerable fish populations. 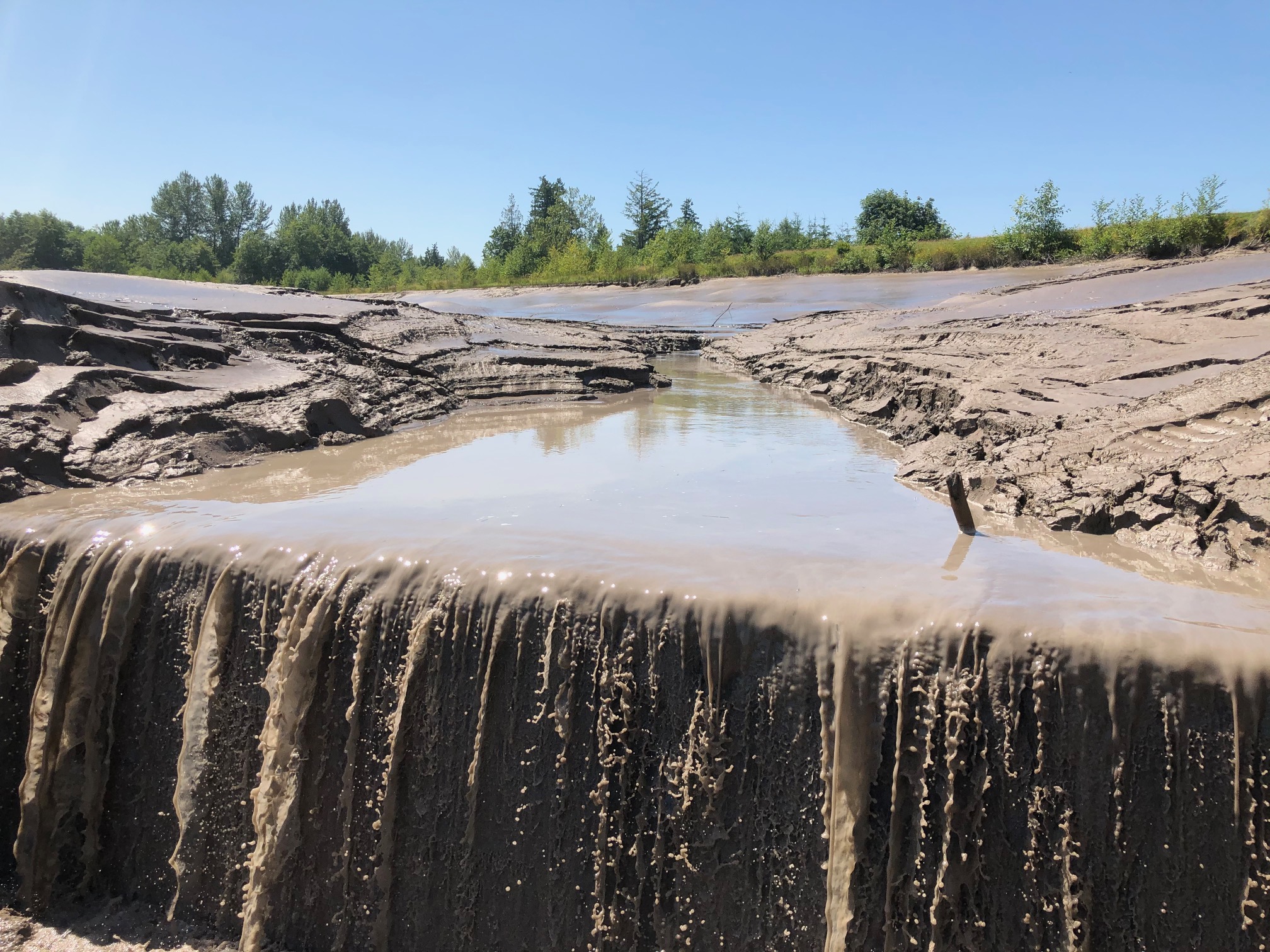 The forebay on the Puyallup River. (Puyallup Tribe of Indians)

Fishing for steelhead trout along the Puyallup River has been a time-honored tradition. Russ Ladley, who works in the Puyallup Tribe of Indians’ fisheries department as a resource protection manager, says it‘s been significant for the tribal fishery, too.

But nobody has harvested steelhead trout on the river for 20 years.

"Typically, your first response from management is to stop fishing to allow their recovery,” Ladley says. “Well, we stopped fishing for 20 years, yet they have not recovered.”

While Native and non-Native people alike once fished for steelhead in the river, this decline has been of particular concern to the Puyallup Tribe of Indians. The tribe has long relied on the river’s fish for more than recreation; for its members, fishing is also a cornerstone of culture and subsistence.

“That’s aside from economic interests as well, for the sale of fish,” says Ladley. “The tribe has sacrificed a lot of fishing opportunities in the name of recovery and restoration. It’s a big impact.”

But the river’s population of steelhead trout, alongside chinook salmon and bull trout, have seen a concerning, steady decline over the years. All three species received extra protection under the Endangered Species Act in 1973. The fish use the river during migration and as spawning grounds, making the river’s health an important part of their survival.

Ladley has watched this decline since he began working for the tribe 30 years ago. Most streams in the region have seen a similar crash, but he says a diversion dam on the river built 116 years ago has further challenged the fish’s survival. Before the owners of the dam added protective measures like fish ladders in the ’90s, the majority of fish attempting to swim past the dam were simply drawn into the dam’s turbine and killed.

“[It’s] largely attributed to habitat and habitat deficiencies associated with human development,” Ladley says. “It’s hard to point your finger at one impact, but when there’s an egregious insult such as the Electron Dam and what’s been going on there … it becomes a glaring deficiency.”

The tribe has participated in negotiations with various owners of the dam for decades. But now it intends to sue its current owners, Electron Hydro, for violations of both the Clean Water Act and the Endangered Species Act.

The most recent conflict stems from an incident in July, when Electron Hydro paused the dam’s operations and began construction on a bypass channel. In the process, it placed thousands of yards of Astroturf into the river. Crumb rubber granules from the Astroturf quickly washed downstream and spread for miles. The incident was severe enough to anger Pierce County and tribal officials; Puyallup Tribal Chairman Bill Sterud described the situation as “living in a nightmare.” The U.S. Army Corps of Engineers issued a stop-work order on Electron Hydro’s construction project and mandated a cleanup.

On Oct. 2, the tribe announced an intent to file a lawsuit against Electron Hydro in 60 days. But the tribe’s attorney, Lisa Anderson, says there may be consideration to file sooner, since issues with the river go beyond the Astroturf incident: The tribe also wants Electron Hydro to abandon plans to build a rock dam, which the company had intended to add this month and which the tribe worries could hurt fish populations further. Additionally, the tribe says the diversion dam’s fish ladder hasn’t been operable since dam construction began in the summer.

These are just a few bullet points in the laundry list of dam issues the Puyallup Tribe and others say they've been plagued with for decades. For an already hurting fish population, Ladley says, it’s important to make sure the next generation of fish can be grown safely.

“There’s so many groups working to restore fish runs, and this is a slap in the face to those efforts,” Ladley says. “That’s going to be impactful for future generations.”

While Ladley says he can only speculate at the damage created by the Astroturf, previous studies show a wide range of negative effects on the river's fish resulting from the dam. Some of those studies were funded by the dam’s previous owner, Puget Sound Energy (PSE).

Survival rates of fish in those studies vary from 5% to 50%, depending on how much water the dam diverts. Ladley says the dam creates more energy as water diversion increases — but that comes with greater harm to the fish.

Before the Astroturf and before Electron Hydro became the dam’s new owners in 2016, the Puyallup Tribe negotiated with PSE to address problems with the diversion dam.

In 1997, the tribe and PSE agreed on a four-part plan to safeguard the fish, a plan that included building a collection facility in 1998 and a fish ladder in 2000. They also established a minimum instream flow through the dam, which meant that PSE couldn’t divert 100% of the water going through it, even during low-flow periods. Lastly, PSE promised to fund recovery efforts for fish in the Puyallup River.

But those protections didn’t fix the problem. Fish are still killed when going through the dam today, Ladley says, as shown by those studies illustrating a variance in survival rates from 5% to 50%. The dam has drawn critics beyond the tribe, including the environmental nonprofit American Rivers, which this year named the river one of “America’s most endangered rivers” and filed a lawsuit against Electron Hydro in 2016.

Wendy McDermott, a director with American Rivers, says the dam’s construction predates the passage of the Endangered Species Act and the creation of the Federal Energy Regulatory Commission, the government entity that issues licenses for hydropower sources. While the dam’s owners still must comply with the Endangered Species Act, McDermott says, part of the problem is that the dam was built before the act existed.

“It has been, basically, killing anadromous fish since it was built,” she says.

Electron Hydro has defended the dam by highlighting  hydropower’s importance in clean energy. Chris Spens, Electron Hydro’s director of regulatory and environmental affairs, says that the dam has an annual capacity to power 20,000 homes when in operation, making it a significant local source of power. With plans already in place to overhaul the diversion dam and make it safe for fish passage, Spens says, the ongoing construction will remedy the issues plaguing the dam and maintain clean-power benefits.

“Because of the nature of the river, it has to be constructed in phases over a couple of years,” Spens says. “We’re more than halfway through the remediation and to … shoot it down now is extremely shortsighted.”

But Ladley says the dam is already preventing fish from safely accessing miles of “pristine habitat” upstream from it, and solutions aren't coming quickly enough.

“We want to allow the fish to do what they always did historically,” Ladley says. “They should be allowed to reproduce naturally and immigrate at their will, as opposed to being subject to this facility.”

Electron Hydro’s deadline for construction is Oct. 28, so it plans to build the rock dam before that. It would be a temporary dam that would be in place until it can continue construction on the diversion dam next summer.

To Puyallup officials, this is yet another insult. Ladley says that he doesn’t know of any rock dam in the region that exists alongside salmon, leading to his skepticism that it would work well here. The tribe sees the rock dam as a filter that will possibly collect and kill young fish.

“We don’t want to experiment,” Ladley says. “We want proven fish passage applications, and that’s not what they’re providing to us.”

After decades of controversy, Ladley says it’s hard to imagine what a healthy solution would actually look like. Anderson, the tribe’s attorney, says one guiding example could be a fish trap and dam along White River, which was modified by the Army Corps of Engineers after tribes and federal fisheries managers demanded changes. The White River dam construction is set to end this month.

“It took many tries, but the Corps has done a good project,” Anderson says. “Our guys are seeing the success over there and the mess at Electron. The steps that are taken aren’t even close to what’s needed to actually do that type of construction.”

Spens says power concerns and fish populations are often pitted against each other. Electron Hydro hopes that with modifications, the diversion dam can bolster both.

“That’s wishful thinking on their part, that’s all it is,” he says. “The best solution is a no dam at all —  an open channel [and] the restoration of a free-flowing river. That’s the best solution for fish.”

Update: This article was updated to reflect that representatives from Electron Hydro claim their diversion dam has the capacity to annually power 20,000 homes, not 200,000. Crosscut regrets the error. It was also updated to clarify the purpose of the tribal fishery.