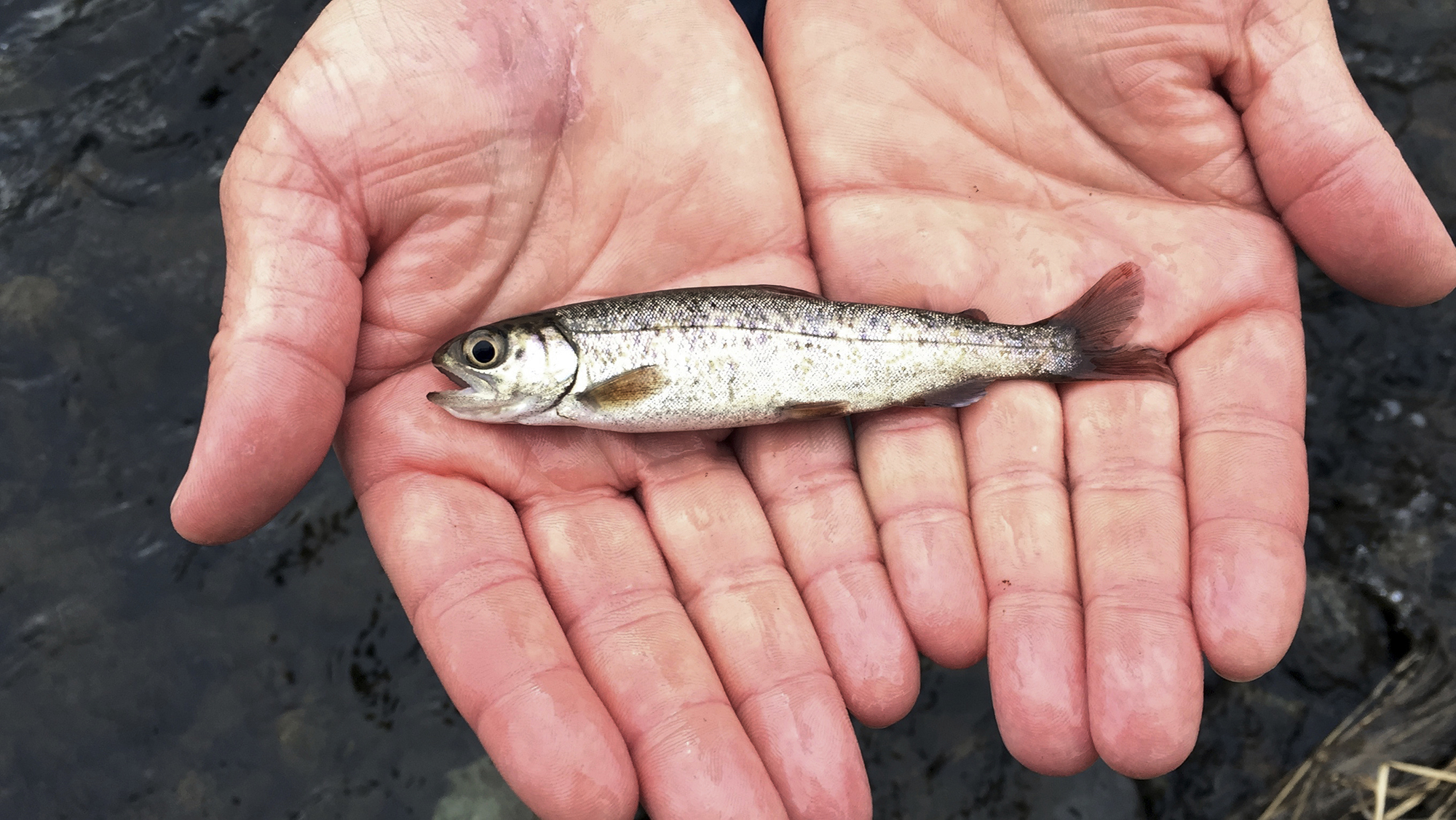 In this March 9, 2017, photo, a fish biologist holds a juvenile coho salmon at the Lostine River in northeastern Oregon. The Northwest’s salmon are “teetering on the brink of extinction,” according to a new report. (Gillian Flaccus/AP)

Washington’s salmon are “teetering on the brink of extinction,” according to a new report. It says the state must change how it’s responding to climate change and the growing number of people in Washington.

Washington’s State of Salmon in Watersheds report says time is running out for the Northwest’s iconic fish. The report shows a trend of warming waters and habitat degradation is causing trouble for its salmon runs. Ten of the 14 threatened or endangered salmon and steelhead runs in the state are not getting any better. Of those, five are “in crisis.”

“I’m not going to sugarcoat things. Salmon are in crisis. And they need our help now more than ever,” Erik Neatherlin said. He’s is with the Governor’s Salmon Recovery Office.

Neatherlin says things will only get worse as the climate changes. Glaciers that melt into cold, salmon-bearing streams are predicted to disappear.

What climate change could bring

To foreshadow what climate change could bring, look to the summer of 2015. That year, unusually warm waters and low flows killed hundreds of thousands of adult sockeye in the Columbia and Snake rivers.

“We had a budget request to the governor’s office of $80 million – that is for the salmon recovery funding board, one of the grant programs. That would have funded about 30% of the projects that we have in the queue for the two-year period. So you can see, we’re not even getting very much of the project work done,” said Kaleen Cottingham, who directs the state’s Recreation and Conservation Office.

The governor’s proposed budget has about half the requested amount for that particular program. With other programs the office is funding, salmon recovery currently receives about 22% of what’s needed “to get the job done,” Cottingham said.

Forested riverbanks can provide shade and habitat for salmon. The report says that as Washington’s population grows, planners need to take salmon habitat into account. Shoreline development, including bulkheads and seawalls, can harm salmon habitat.

Neatherlin, with the Salmon Recovery Office, says newer options like soft armoring can be less harmful to habitat and “mimic more of a natural shoreline.”

“We’re starting to turn the corner on the amount of hard shoreline armoring that has occurred in the past,” Neatherlin said. “The other thing is, where we can, we’re making a whole lot of progress in opening up new estuaries.”

The report says that in Puget Sound, about one-third of the region’s shoreline is armored — more than 800 miles. Thousands of new estuaries have also been opened up in Puget Sound by breaching, moving or rerouting dikes.

Those shorelines are critical for chinook, a main source of food for orca, Neatherline says.

Other issues that face salmon in Washington: fish passage barriers, pollution and predation.

The biggest pollutant for salmon is stormwater runoff. When it rains, pollution from vehicles, fertilizers and other sources runs off impervious surfaces, like pavement and roofs, into rivers and streams.

The report says solutions such as rain gardens, which can filter stormwater and remove pollutants can “make the difference between life and death for salmon.”

Joseph Bogaard is with the conservation group Save Our Wild Salmon. He says he’s not surprised about the findings, noting the steady decline of salmon over recent decades and challenges including the changing climate and habitat loss.

“From our perspective, it’s important to have a healthy, connected and resilient habitat, with a healthy watershed,” Bogaard said.

Salmon are not just an “environmental issue,” he said. They are important for tribal communities, recreation and the ecosystem, which is why it’s imperative to meet the needs of the fish.

Not all bad news

Neatherlin says, it’s not all bad news on the salmon front. For one, no new salmon species have been added to the endangered species list since 2007.

“That represents an incredible amount of progress,” Neatherlin said. “We also know we have some species that are approaching their abundance goals, like Hood Canal summer chum. … We know what needs to be done. We just need to amp up our efforts.”

He says tribes have helped to successfully remove dams on the Elwha, Middle Fork Nooksack and Pilchuck rivers. Other smaller dams are also under consideration to be removed or altered.

“Certainly it’s going to be part of the activities going forward to evaluate dams,” he said.