Residents from all over the state begin virtual meetings to decide which climate change solutions to recommend to the Legislature in Olympia. 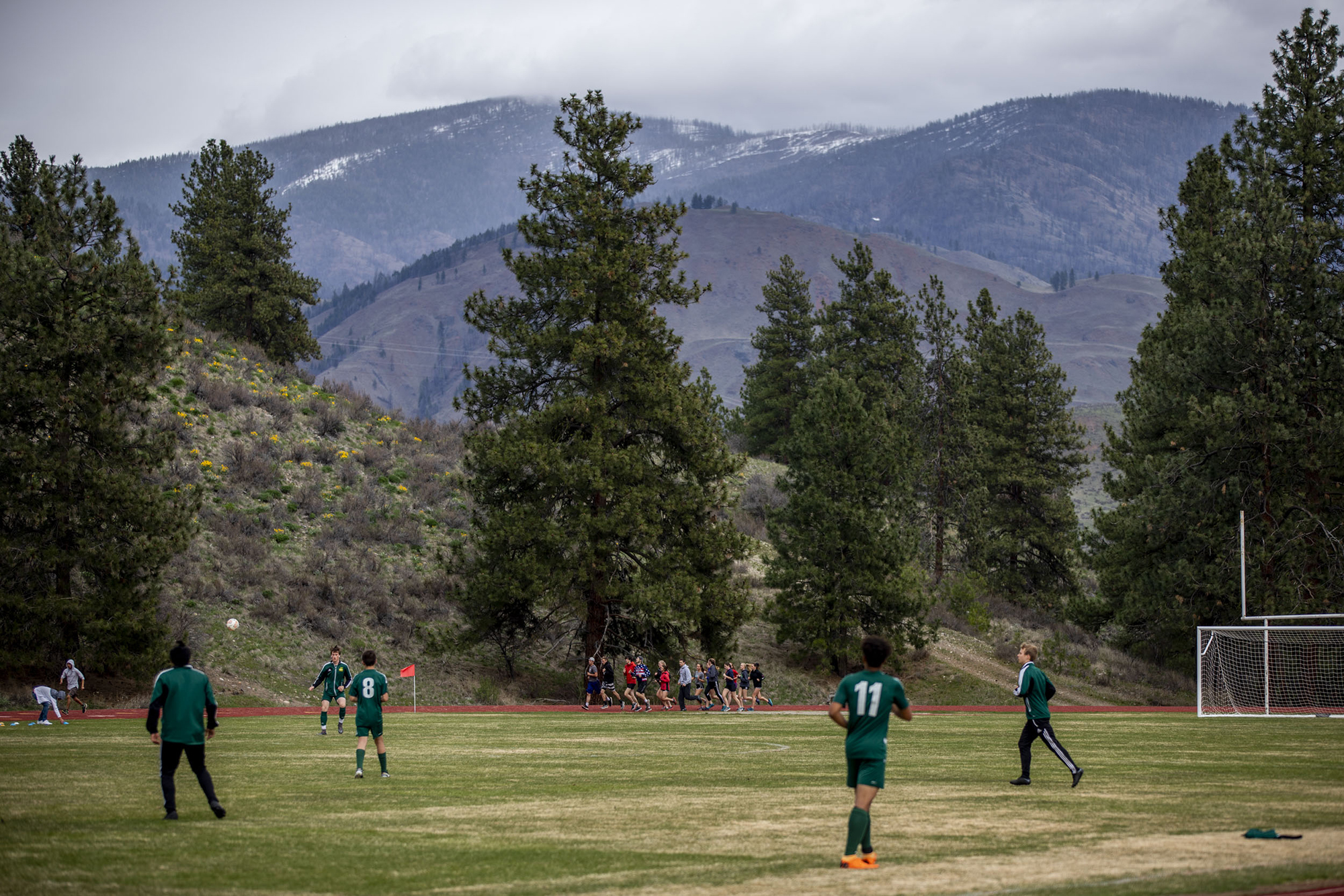 Members of the Liberty Bell Junior-Senior High School track team do laps during practice on April 18, 2019. During wildfires, the smoke got so bad that the athletes couldn't use the school's track, so they relied on a community gym to let them use their stationary exercise bikes. (Dorothy Edwards/Crosscut)

On the evening of Jan. 12, at the inaugural meeting of the Washington Climate Assembly, a question appeared on the screen: What preferred future do you envision 50 years from now?

The 90 Washington residents who had gathered together virtually began to type responses into the chat feature. Gretchen Muller, the senior associate at Cascadia Consulting Group who ran the meeting, read aloud their contributions.

“No homelessness. Telecommuting. A future where people will listen to different viewpoints without being judged. A better future for seniors.”

Muller opened the floor to assembly members, and Ron* from Moses Lake said he’d like to see more cheap or government-subsidized solar panels.

“I’m very anxious to hear other people’s insights,” he continued, “because as we share those and ponder them between meetings, I think we can come up with something terrific.”

The Washington Climate Assembly is a first-of-its-kind experiment in the United States. Inspired by climate assemblies that have recently taken place in France and the United Kingdom, assembly members represent a sort of Washington state in miniature, and they’ll spend the next two months working to reach a consensus on how to mitigate climate pollution in Washington. In March, they’ll send their recommendations to the state Legislature.

The assembly’s 80 residents and 10 alternates were selected by random-digit dialing of both landlines and cellphones, and hail from every congressional district in the state. They reflect the approximate racial diversity, gender breakdown and income levels of people in Washington writ large, and their views on whether climate change is happening — and whether humans are to blame for it — are similarly reflective of the mix of opinions held statewide.

State Rep. Jake Fey, D-Tacoma, publicly backed the idea of an assembly last year, along with four other state lawmakers, in an opinion piece in the Everett Herald.

In an interview, Fey characterized the assembly as “the current-day equivalent of a town hall meeting.”

As the chair of the House Transportation Committee, Fey said he’s curious what the assembly process shows about what average Washingtonians are willing to do to deal with climate change, what changes to transportation systems they’re willing to accept and whether they’d accept carbon-related cost increases to fuels. He believes that having a diverse range of people participating in the assembly will help the conclusions from being discounted.

“It’s going to hinge on getting people from different ideological perspectives to talk and be informed and come to some consensus,” Fey said. “It’s an experiment, but I’m supportive of this because I think that it could be more persuasive in furthering the different strategies that might be used to reduce carbon.”

State Sen. Judy Warnick, R-Moses Lake, has also offered her support for the process. Warnick sits on the monitoring team of the assembly, which makes sure the group follows fair procedures. She was encouraged to join by her fellow 13th district lawmaker, State Rep. Tom Dent, R-Moses Lake.

“It will be interesting for me — I haven’t been involved in a lot of climate discussion,” said Warnick, who added that she believes climate change is happening and that healthy forests and air are important priorities for her district. Last year’s Labor Day wildfires were the most destructive her district has seen in years.

“The amount of people that they’re bringing in to have this discussion is exciting,” she says. “It’s not just a professor, a scientist or a political advocate; it’s going to be a wide variety.”

Because assembly members come from varied walks of life and hold differing beliefs, their recommendations — to lawmakers — are distinct from those suggested by activists. But the assembly is also different from a poll or a vote in that members are given several weeks to learn about the topic. They are also given the resources to ask any questions they might have.

Muller of Cascadia Consulting Group, the organization running the assembly as a neutral facilitator, said several assembly members had not previously owned a personal computer; the consultants set them up with computers and Wi-Fi. Each assembly member is offered a $500 honorarium for participating.

The assembly’s learning sessions are public and will be streamed live on YouTube. They feature presentations from experts, as well as by interested parties who can make presentations or submit policy suggestions, regardless of their expertise. The application for presenters will be open through Jan. 22, and any group or individual can submit a policy recommendation here. Once the learning sessions are finished, the assembly will deliberate privately before issuing its recommendations.

While this is the first time that a climate assembly has been held in the United States, other states have experimented with assemblies to advise their governments on other issues. Oregon held a citizens assembly last year to get insight on COVID-19 priorities for the state Legislature, and two cities in Minnesota held one jointly in 2017 to study how well their local governments functioned.

Internationally, climate assemblies have become more common in the past five years. Scotland is currently holding a climate assembly that will run along a similar timeline to Washington’s. Both France and the United Kingdom held national-level climate assemblies that published recommendations last year. In France, President Emmanuel Macron pledged to support 146 of the French assembly’s 149 policy suggestions, and debate over their implementation is ongoing.

The Washington Climate Assembly will next meet Jan. 19 from 6 to 8 p.m. More information about the schedule can be found here. For her part, Warnick said she’s looking forward to the assembly because it brings together people with different beliefs in search of common ground.

“It’s all about building relationships, listening to each other’s ideas, and that’s what has me the most optimistic,” Warnick said.

* Assembly participants are identified only by first name and location to protect their privacy. Other assemblies have publicly released the names of participants after the proceedings have finished. Gretchen Muller of Cascadia Consulting Group indicated that the Washington Climate Assembly may also do this, but has not decided as of this writing.