Tree-Free Paper is rescuing forests and farmers in Washington

In 2013, about 20 wheat farmers gathered at a local pizza joint in Dayton, in Washington's Columbia County, to hear Columbia Pulp CEO John Begley make his case.

Begley and his team had big plans. He told the farmers that his company would start buying up the discarded wheat straw that was left lying in their fields after they finished their harvest. This would-be waste could be turned into pulp to make paper products, no trees required, reducing the carbon footprint of paper manufacturing and introducing a new income stream for the wheat producers.

This story was shared through the Solutions Journalism Exchange and is reprinted from the site Reasons to be Cheerful.

But the farmers had been sold on plans for buying up their wheat waste for various schemes in the past — and, despite many promises, none had come to fruition. Skepticism was high. “Everybody was kind of feeling each other out,” recalls Begley. The meeting turned out to be the very first step in a yearslong process of building trust and showing results.

Wheat growers were brought in for tours and shown the pulp manufacturing system. Questions were answered and relationships nurtured. Finally, six years after that initial meeting, Columbia Pulp became the first tree-free pulping facility in North America, with a design capacity to process 240,000 tons of straw that the farmers would otherwise throw away each year. What was once garbage could now be salvaged and sold for pulp to make paper products that didn’t require felling a single tree.

Washington’s iconic forests of Douglas fir, Western hemlock and Sitka spruce are some of the most efficient carbon-sequestration ecosystems in the world. Taken together, these trees scrub 35% of the state’s total carbon emissions. All that wood is also worth a lot of money — net timber revenues from state forestland amounted to $124 million in 2018. The tension is evident: a state whose forests are a critical carbon sink has built an economy that relies on turning those forests into plywood, sawdust and paper products.

But Washington is also home to a vast landscape that many out-of-staters don’t know about: 2.2 million acres of wheat fields that undulate across the state’s southeastern flank, making it America’s third largest producer of wheat.

“[Wheat] farmers in the Northwest have a good product in a good market, but there are years when they run really lean,” says Ben Rankin, founder of Columbia Straw Supply, which manages relationships between local growers and Columbia Pulp.

One of the many challenges of profitable wheat production is that the stalk closest to the ground is too dense for the combine to run through, so farmers must figure out how to clear what’s left standing after the harvest. There are essentially three options: till, burn or bale. The first two are undesirable. Tilling dries out the soil and causes erosion, and burning fills the air with noxious smoke. That leaves baling as the most environmentally friendly option. The question is what to do with all those bales of unusable leftover straw.

“That’s where Columbia Straw comes in,” says Rankin, who got involved with Columbia Pulp in 2014 after seeing a need to form connections between the company and the people producing wheat. Columbia Straw Supply works with local balers to buy up all that leftover wheat straw, which Columbia Pulp turns into pulp for paper products, giving farmers a new stream of revenue — and pushing the paper industry into a more sustainable direction. 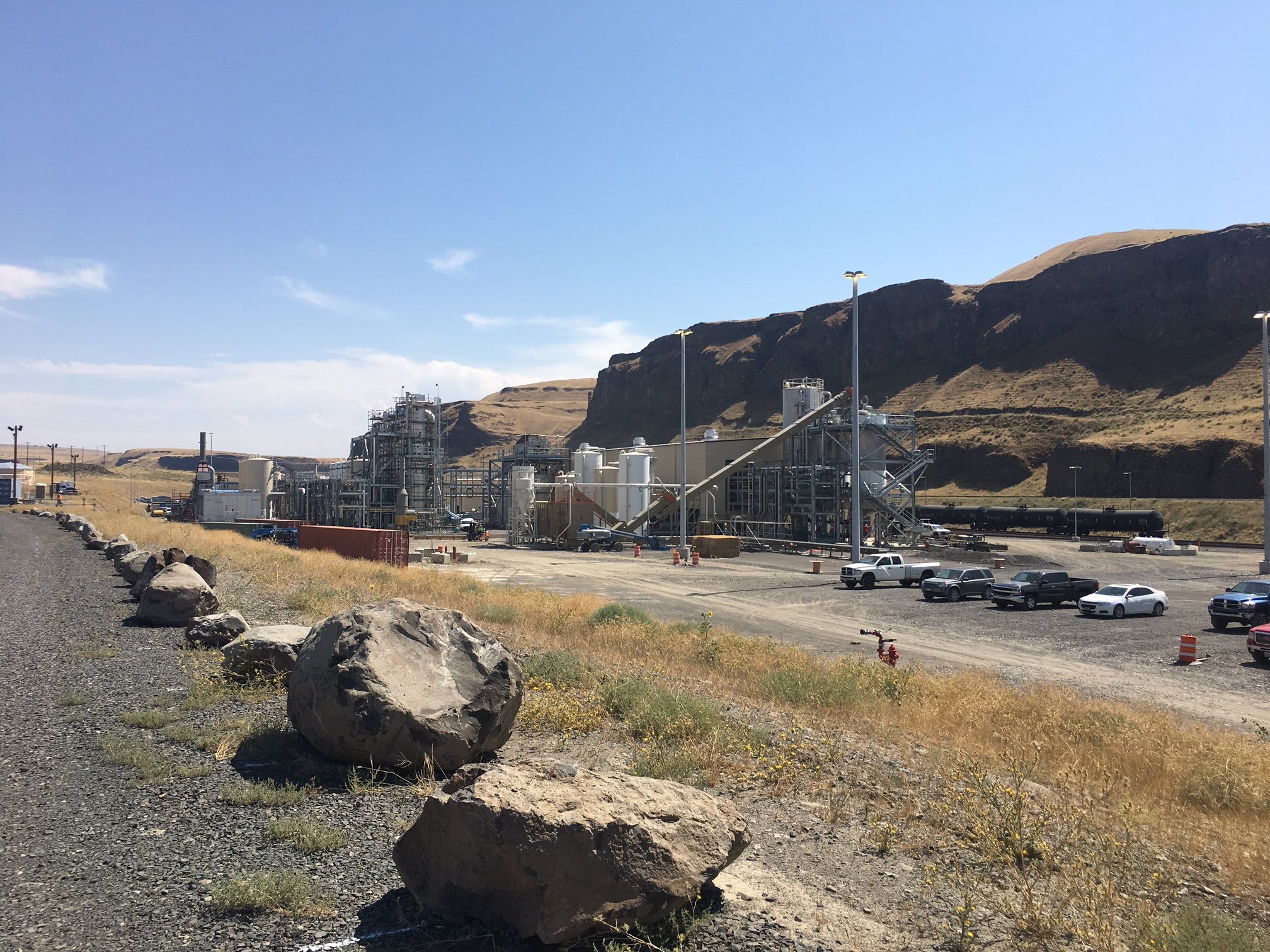 A new kind of paper

“Man has used straw in pulp and paper since the beginning of time,” says Begley. The Egyptians used papyrus, a strawlike plant found in wetlands. But until recently, straw didn’t make sense for large-scale paper pulp manufacturing.

The reason is that straw is about two-thirds cellulose, which is what you want for pulp, and about one-third other materials. “What made it uneconomical in the old days was how to get rid of that one-third of material,” says Begley.

Mark Lewis and Bill McKean at the University of Washington took on the challenge of finding a profitable, sustainable use for this excess wheat straw waste. Their work resulted in the Phoenix Process, which not only uses 90% less water and fewer chemicals than traditional tree pulping, but also makes use of that final one-third of material to produce nontoxic biopolymers for fertilizer, de-icing agents and other products.

“I realized early on that it was going to work,” says Lewis, who’s been studying nonwood pulping since college. “The challenge was finding the right partners and banging my head against the wall — until I decided to start my own company.”

Lewis founded Columbia Pulp, along with Sustainable Fiber Technologies, which owns and licenses out the Phoenix Process. A recent life cycle analysis at Columbia Pulp found that the carbon footprint of this new pulping process is 76% lower than that of conventional tree pulps. Part of these saved emissions come from the process itself, but a large chunk comes from simply leaving forests alone. Clearing forests reduces carbon sequestration, and replanting those forests doesn’t revert their sequestration potential back to baseline. According to research conducted for the Canadian government, undisturbed forests sequester nearly twice as much carbon as managed ones. To top it off, only about 25% of a tree gets used when it is processed to make paper.

Between the forest conservation and the more efficient processing techniques, Columbia Pulp estimates that replacing 140,000 tons of conventional pulp with its own version would save 133,000 metric tons of carbon dioxide per year — the equivalent of what’s absorbed by 5.8 million trees.

The product is catching on. A partnership between Sustainable Fiber Technologies and Anheuser-Busch is turning barley waste from beer production into the cardboard box that holds a six-pack of Corona. Sustainable Fiber has also licensed the Phoenix Process to Essity, one of the world’s largest producers of tissue products.

“Once we were up and running, there was a lot of enthusiasm from local farmers,” says Rankin. “They want to pass on a farm to the next generation, so they’re invested in doing the right thing.”

So what persuaded those farmers to trust in the potential of Columbia Pulp?

“We built it,” says Begley. “We put shovels in the ground.”

Just over a year after opening, operations at Columbia Pulp were halted by COVID-19, with 90 of the original 100 employees furloughed in March of 2020. Growers have therefore not yet seen the full potential of the mill’s straw purchasing capacity. But operations are slowly starting up again, and 75 jobs have been restored, with 80% of them now filled by the original workers.

Lewis says COVID-19 caused delays in potential partnerships as well, since investors stopped meeting in person last year. But the deals with Anheuser-Busch and Essity are bolstering interest in nonwood pulp. The possibility of new regulations restricting single-use plastics across the U.S. could open up new markets for wheat-straw pulp products, as companies look for sustainable, paper replacements.

With the technology available, pressure is mounting on paper companies. Procter & Gamble, whose Charmin toilet paper is made from 100% virgin forest, was recently called out by shareholders, 67% of whom voted in favor of a proposal to “increase the scale, pace and rigor of its efforts to eliminate deforestation.”

“We all have to learn to become stewards and gardeners, not just extractors,” says Rankin, who points out that in the 1960s there was a big shift toward recycled paper, and today over 65% of paper products in the U.S. are recycled. He’s excited to be a part of the next significant shift. Nonwood pulp, he believes, “could be the beginning of another big transformation in the industry.”

This story was shared through the Solutions Journalism Exchange and is reprinted from the site Reasons to be Cheerful.