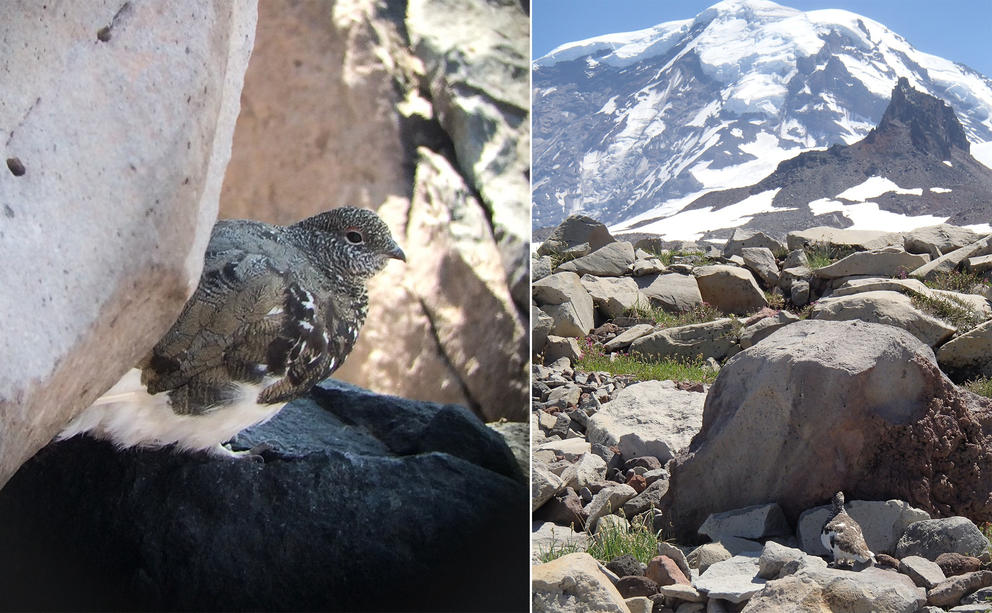 Left: The U.S. Fish and Wildlife Service is proposing listing the Mount Rainier white-tailed ptarmigan as threatened because climate change will greatly disrupt its alpine habitat. (Jamie Hanson/USFWS) Right: The bird is appropriately named, seen here high up in the alpine environment near the mountain. (Teal Waterstrat/USFWS)

If you’ve ever been hiking in the Cascades, high up in the alpine meadows, and were spooked by a streak of a bird, a plume of feathers that darted right in front of your face, you may have come across the Mount Rainier white-tailed ptarmigan.

This chicken-sized grouse stays hidden, until you are right upon it. Then it squawks and flies away.

“They especially like those pretty little meadows that backpackers and hikers like to go to, with the pink heather and the flowers blooming in the little creeks below the snow bank. I like to joke that the main habitat feature that whitetail ptarmigan select for is a pretty view,” said Terry Frederick, a wildlife biologist with the U.S. Fish and Wildlife Service.

Their habitat is quickly shrinking as climate change warms the areas they depend on. That’s why the service has proposed listing them as threatened on the endangered species list.

“They aren’t very well adapted to heat, and they will seek out shade and cool microclimates,” Frederick said.

Climate change is their biggest threat. It’s the reason the Fish and Wildlife made this decision. As these places warm, biologists expect more species to join the ranks of plants and wildlife solely threatened by climate change, from meltwater lednian stoneflies to eastern black rail to polar bears.

Although it’s difficult to know how many of the birds are around now — their habitat is hard to get to and no large-scale surveys have been conducted — biologists believe this subspecies is found throughout Washington’s Cascades and possibly into British Columbia.

In the Northwest, Frederick says, the Mount Rainier white-tailed ptarmigan subspecies will mostly lose habitat because of climate change. She says most of the alpine vegetation the birds rely on will be lost by the end of the century. All except at Mount Rainier itself, she says, because it’s so big and tall.

“Studies have shown there’s this relationship that mountain tops are warming at a faster rate than other places, except for maybe the Arctic,” Frederick says. “Those warmer summers mean less melting snow, which supports the vegetation that the ptarmigan eat.

“Also, trees are moving upslope as the climate gets warmer and as they move upslope, the space for alpine vegetation above the trees is shrinking and it’s just getting squeezed and squeezed and squeezed until eventually there will be nothing left in many places,” Frederick said.

The Washington state Department of Fish and Wildlife says the birds are highly sensitive to climate change and will experience “increases in winter minimum temperatures, increased temperatures overall and reduced snowpack.” The state calls it a species of greatest conservation need.

To protect the birds, Frederick says, they’ll first need “small sites where there’s refuge from the warming climate, and that’s going to be a challenge to figure out how to create those.”

Their constantly molting feathers — milky white in the winter, mottled white and brown in the spring, brown in the summer — camouflage them throughout the year. They have feathers on their feet, which helps them walk on top of the snow, like a snowshoe hare. They sit statuesque to hide from predators, mainly hawks and falcons, thus scaring many a hiker. They burrow in the snow during extreme weather.

“It’s like a little igloo in there sheltered behind the ice and the extreme cold,” Frederick said.

“There are those high mountain areas that conservationists used to think were protected,” she said. “And they needed to focus on lower elevation areas that had other threats. Now we’re starting to rethink that assumption.”

This story was originally published at Northwest Public Broadcasting on June 15, 2021.