Unprecedented temperatures recall a 2015 heat wave that killed 99% of salmon returning to one stretch of the Snake River. 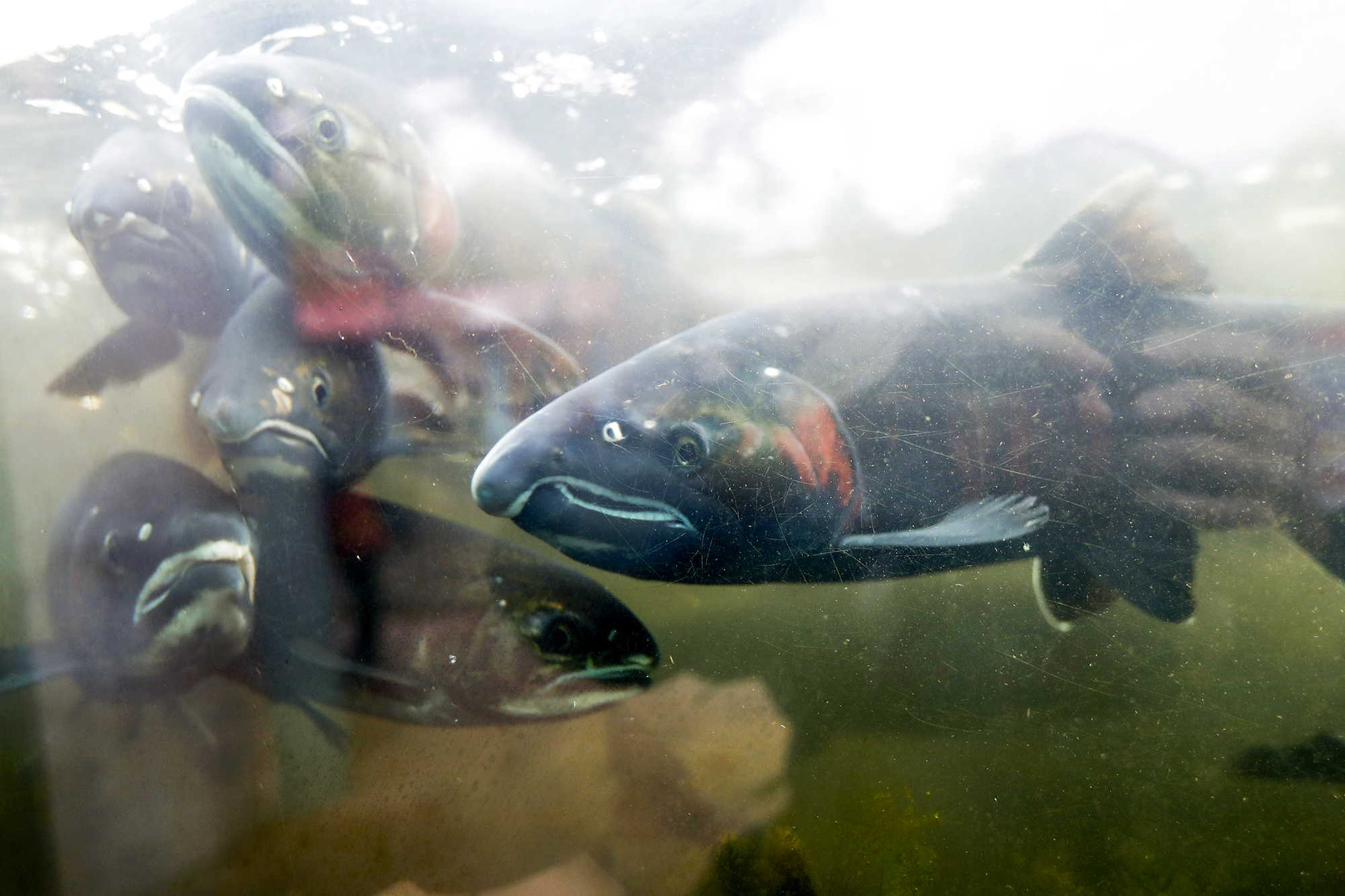 Spawning salmon gather at a viewing window near a fish ladder, Oct. 17, 2019, during the fall spawning season at the Issaquah Fish Hatchery. (Ted S. Warren/AP)

As the mercury climbed recently, water temperatures were also expected to increase. Warmer waters can spell bad news for salmon, especially if the temperatures stay warm for long periods of time.

For salmon, temps above 68 degrees Fahrenheit can be dangerously warm. The fish will often take refuge in cooler areas, like tributaries.

“As we see river temperatures warm, fish might have less access to those types of habitats that they would be seeking out. That’s the risk, ... that everything is warming up, and they’re not going to find those nice, cool places where they can hang out and do their thing,” says Alison Colotelo, a fisheries biologist at Pacific Northwest National Laboratory.

Snake River sockeye have already started migrating back from the ocean to their spawning grounds. Claire McGrath, with the federal National Oceanic and Atmospheric Administration Fisheries, says salmon should be reaching the mouth of the Snake. Before record temperatures hit the Pacific Nothwest, dam managers began to release cool water from behind Idaho’s Dworshak Dam. That water eventually flows into the Snake River and should provide some relief.

“Depending on what the volume of water released from Dworshak is, there’s only so many days that we can effectively cool the temperatures at the Lower Granite project" on the Snake River, McGrath says.

She says, in an average year, that works well to cool waters when it’s needed.

“The concern, of course, is that we have this pretty sustained heat wave right now. Temperatures in Lewiston, Idaho, are forecast above 100 degrees for close to two weeks,” McGrath says. “Those very extreme temperatures, it’s almost getting beyond our ability to control the temperature [behind dams] and maintain our temperature criterion of" 68 degrees Fahrenheit.

McGrath says water temperatures are “very reactive” to air temperatures, especially as water flow levels are lower in the Snake River. She says there’s concern that this year could be similar to disastrous water temperatures and low flows that happened in 2015. The good news: This year, the lower Columbia River is in better shape than it was six years ago.

In 2015, extremely warm water combined with low stream flows. The Snake River sockeye run that year was supposed to break records. Instead, nearly 99% of the run died before it reached Idaho’s Sawtooth Valley.

Improvements were also made to the system after 2015 to help temperatures at fish ladders. Idaho Fish and Game can also trap and haul sockeye captured at Lower Granite Dam to the Sawtooth Hatchery, when it deems the water is too warm.

NOAA Fisheries is also paying attention to sockeye in Washington’s Okanagan basin, which faced a large die-off in 2015.

Many researchers viewed 2015 as a foreshadowing of what climate change could have in store for salmon.

“Understanding how do we manage our river systems in a way that’s effective, to get fish to where they need to be to be successful in spawning, is going to continue to be important,” Colotelo says.

This story was originally published at Northwest Public Broadcasting on June 24, 2021.

by / August 17
Inside Crosscut