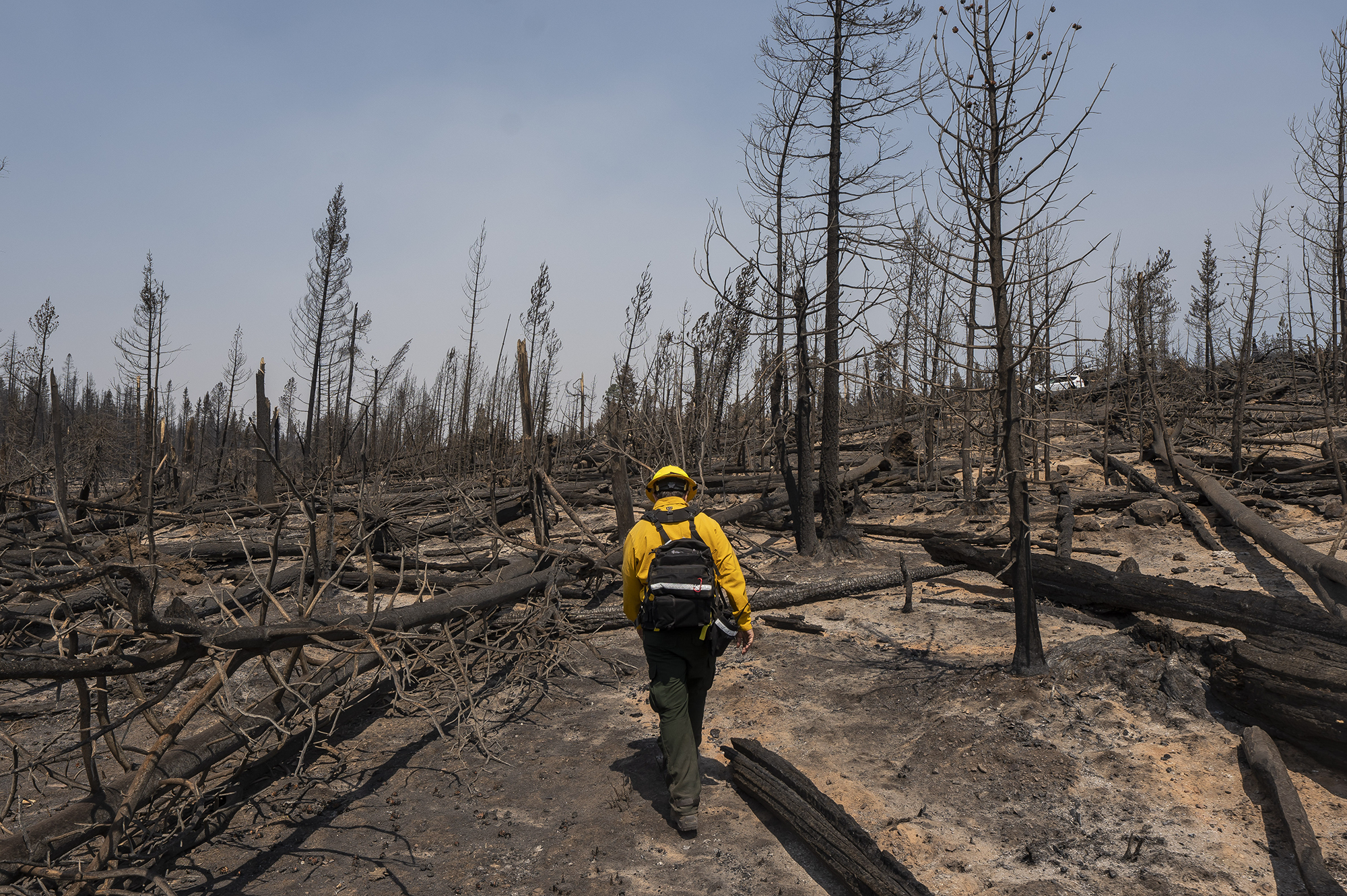 While western Washington skies have stayed clear so far, smoke plumes blanket much of the rest of the Northwest, as the worst of the West’s wildfire season remains ahead.

Liz Walker and her neighbors in Winthrop have been living under that noxious cloud for days as a pair of fires burning a total area nearly twice the size of Seattle tear through forests and scrubland near the north central Washington mountain town in Okanogan County. Air quality there and elsewhere east of the Cascades has fallen to unhealthy levels, as smoke particles that travel deep into the lung fill the air.

“We’re almost maxing out the instruments that can measure particulate matter,” said Walker, director of Clean Air Methow, a community organization that monitors air quality around Winthrop. The Air Quality Index in Winthrop hit 486 last Friday, 14 points short of the maximum score and nearly 10 times the high end of the healthy level, 50.

It’s dangerous, and it’s depressing. Walker has a message for those lucky enough to be living without smoke — prepare now. Get N95 masks. Find a way to clean your indoor air. Figure out who in your circle might need a check in and who might check in on you.

Because, if history is a guide, the worst of “smoke season” has yet to arrive.

In part because of a record-shattering early July heat wave, the 2021 fire season got off to an unusually strong start, said Carol Connolly of the Northwest Interagency Coordination Center, which manages the wildfire response in Washington and Oregon. Usually, about 45 square miles have burned by the third week of July; this year, more than 1,000 square miles had gone up in smoke, much of it consumed by an extraordinarily large lightning-caused fire in southern Oregon.

The total area lost to fire likely will start to fall in line with historical trends, as the fire season reaches its peak in mid-August and fires continue to start, Connolly said. Over the past decade, between 1,750 square miles and 3,100 square miles of forest and grassland have burned during dry summers.

While Washington’s largest fires almost always occur east of the Cascades, they can break out anywhere there is dry wildland to burn. Recent summers have seen fires break out close to Mount Rainier-adjacent Crystal Mountain Ski Resort, on the west side of North Cascades National Park and on the Olympic Peninsula.

Connolly implored residents to avoid activities that could spark new fires. That means no campfires, no parking hot cars in tall grass, no backwoods target shooting or lit cigarettes thrown out of car windows. At present, about 7,000 firefighters and support workers are fighting more than 30 fires in both states, Connolly said. Her center is attempting to “rightsize” the response to each wildfire, as fire managers don’t expect to see that firefighting force expanded.

Heat and, most directly, lightning are the usual cause of uncontrollable fires in the Northwest, and National Weather Service long-term forecasts offer no reason to expect relief. The drought gripping Washington and Oregon is expected to continue. Fire danger in the region is expected to remain elevated through at least the end of August.

Facing all of that, anyone looking up to blue skies now might take a moment to get ready in case they turn a woody brown in the weeks ahead, said Walker, the Winthrop smoke preparedness evangelist who has a doctorate in toxicology. 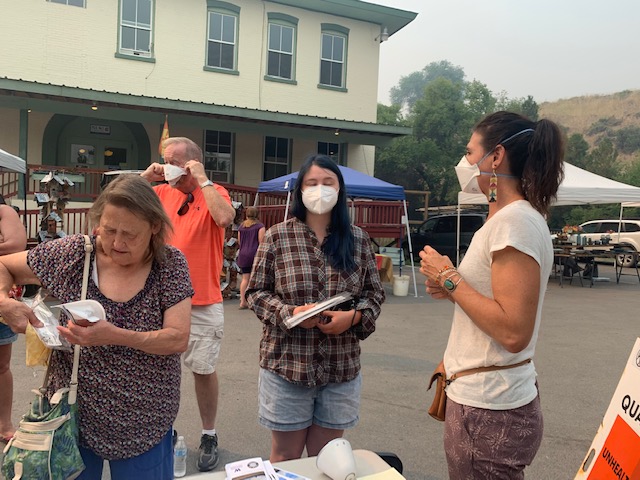 Walker has been helping hand out do-it-yourself air purifier kits — a box fan, a square air filter and tape — and N95-rated masks. The goal, she said, is to make sure folks can create a pocket of clean air in their home while protecting themselves as they venture outside. Along with those tools, Walker’s organization has been handing out trifold leaflets with tips on how to live with and thrive, at least a little, with the smoke:

For those living in areas where fire, not smoke, is the overriding concern, the clock is ticking but has not yet run down.

Residents in fire-prone areas, or basically anywhere outside a dense urban area, should look first to their home itself and the 5-foot area surrounding it, said Ryan Williams, executive director of the Wenatchee-based Cascadia Conservation District.

Williams, whose organization’s responsibilities include reducing the risk of fire in the central Washington district, describes that 5-foot-deep radius as the “immediate ignition zone.” Basically, if fire takes hold there, the house will likely burn.

Anything readily flammable — plants, firewood, beauty bark, patio furniture and fiber welcome mats — should be removed. Pine needles should be swept from the roof and gutters. Fireproof mesh should cover attic and basement vents, to prevent embers from a distant fire from sneaking into the home.

Taking those precautions will protect a home and help firefighters as they scramble to contain a blaze, Williams said.

“Firefighters can’t be everywhere at the same time, and if your house is not prepared, they may not be able to save it,” Williams said. “You have to assume that you’re on your own, and set your house up so it's unlikely to burn.”

Cascadia Conservation District, like others around Washington, also works with timberland owners to revive their forests. At the urging of the Washington Department of Natural Resources and others involved in the state’s wildfire fight, the Legislature this spring approved a landmark $328 million push to increase firefighting capacity and revive forests overfull after nearly a century of fire suppression. That inadvertent tindering is in part to blame for the explosive fires of the past decade, blazes made more likely and more damaging by climate change.

Williams is glad the state is investing in forest restoration, a process that usually sees smaller trees and brush either removed from a forest or chopped up so they can’t help fire reach the crowns of trees. Money made available by the Legislature will help landowners who want to do the work but can’t afford it without state help.

Fixing the forests, though, will be the work of generations, Williams said.

“It’s going to be the start of a really long haul,” he said.

Days or weeks of smoke also take a toll on the mental well-being of those trapped indoors, Clean Air Methow’s Walker said. She has spent much of her time lately thinking about how to maintain some of the joy of summer for her children, ages 7 and 11, despite the specter of fires and smoke. Preparation helps, as do community events and other breaks in the social isolation that comes with the heavy haze.

A habitual runner who spent a week without lacing up her running shoes, Walker has found some solace in her work helping others face the smoke, even as it has become a regular occurrence.

“It’s given me pause. And there’s a little bit of that, ‘Where would I go?’ ” she said. “But I love this place, despite the fires and smoke. And in the thick of it, it feels important to figure out how to make this work for myself and my family.”