WA dairies must do more to clean up their act, judges rule

Environmentalists call the decision a ‘watershed moment,’ as concerns about groundwater pollution mount in Yakima Valley and Whatcom County. 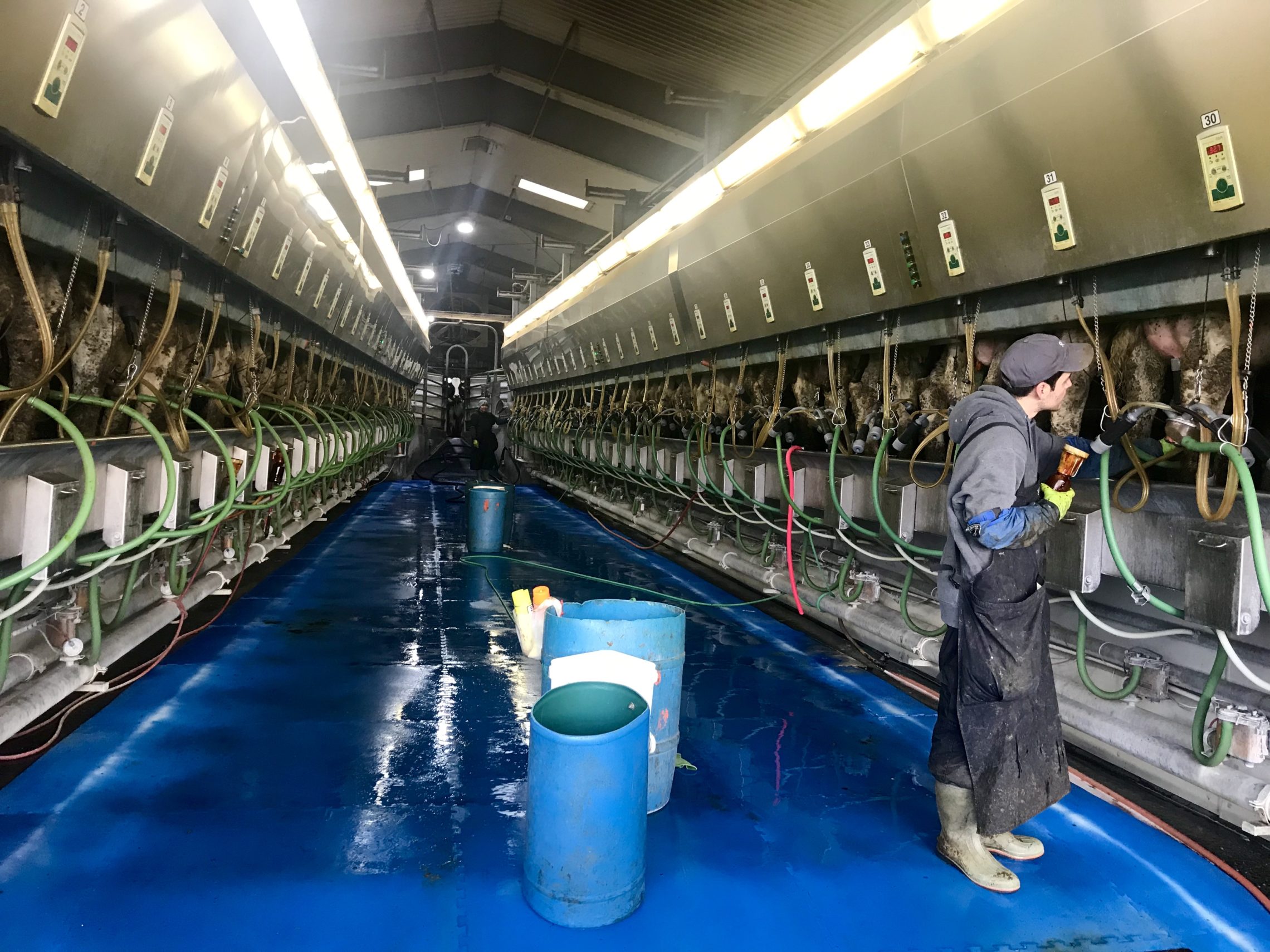 The milking parlor at Jason Sheehan’s Yakima Valley dairy operates nearly 24 hours a day. As a member of a groundwater advisory committee, he has worked to show people the updates he has made to reduce nitrates from his operation. He says nitrates also come from irrigated agriculture and septic tanks. (Courtney Flatt/NWPB)

It’s back to the drawing board for state regulators, after the Washington Court of Appeals ordered the Department of Ecology to rework permits for confined animal feeding operations, known as CAFOs.

Conservation groups are calling the ruling a “watershed moment for the entire state of Washington.”

This story was originally published at Northwest Public Broadcasting on July 6, 2021.

“Time is of the essence. Ecology has been dragging its feet for decades, and now it’s time for them to take responsibility and protect the people of Washington,” said Charlie Tebbutt, lead attorney for the conservation groups, including Friends of Toppenish Creek, Puget Soundkeeper and the Sierra Club.

The decision came after the groups appealed a 2018 decision from the state Pollution Control Hearings Board, which had mostly upheld the Department of Ecology’s CAFO permits. If an agricultural operation discharges waste into state waters, it must get a permit from Ecology under the state and federal Clean Water Act and the state Water Pollution Control Act.

Ecology initially issued the permits in 2017 after a long public comment process. Conservation groups have argued the permits do not protect drinking water.

The Environmental Protection Agency found some large dairies in the Lower Yakima Valley are likely sources of nitrate pollution in drinking water. Excessive levels of nitrates can be harmful to children and some adults.

The court found that Ecology’s current CAFO permits do not protect against groundwater pollution at manure storage lagoons or composting areas.

Liquid animal waste products can be used as fertilizer during certain times of the year. When the waste builds up, it’s stored in manure lagoons or upright tanks.

Often the lagoons are made of compacted earth and clay, which conservation groups have argued doesn’t provide a proper barrier and can leak or spill. Dairy industry groups say best management practices are in place and double-synthetic lagoon liners are prohibitively expensive.

In its decision, the court wrote: “both lagoons and composting areas have the potential to emit discharges that contain pollutants. Multiple studies have determined that lagoons leak waste into soil, and for some lagoons, this leakage has resulted in a documented impact on groundwater.”

It found that the permits didn’t implement “all known, available, and reasonable methods of prevention, treatment, and control” of pollution.

“Both the combined permit and the state only permit allow CAFOs to discharge to groundwater in ways that risk violation of Washington’s antidegradation policies,” the court wrote.

The ruling doesn’t require the use of double-synthetic liners, which pleased industry groups.

The court also found that more monitoring was needed. Currently, for groundwater, the permits require soil monitoring and groundwater monitoring “under limited circumstances.”

“Without water quality monitoring, the permits, as written, contain inherent contradictions that would render them unenforceable,” the court wrote.

Tebbutt, the attorney for the conservation groups, called the requirement of groundwater and surface water monitoring an “important piece of the new permit.” He said monitoring will allow regulators to know the amount of leakage occurring at CAFOs.

In Whatcom County, Tebbutt said, the water table is shallow, which means monitoring wells can almost immediately show when lagoons leak or manure is overapplied on fields.

The court ruled Ecology must consider climate change as a part of the State Environmental Policy Act.

The Washington State Dairy Federation says dairy farmers currently use much less land, water and other resources to make each gallon of milk.

“It’s clear to us from this ruling that more scientific presentations must be made to Ecology to help them understand the remarkable benefits that dairy farms provide to our state, and how much our dairy farms do to make use of recycled water, make use of wastes from other farms and reduce fuel and other energy usage,” Wood said.

The court also said a method to determine when nitrogen fertilizer should first be applied in the spring can be used statewide. The dairy federation said this method was meant only for the west side of the state, where the climate is wetter.

Wood said the decision to require the fertilizer application standard on the wet and dry sides of the state did not meet best management practices and does not better protect waterways. The court said the federation failed to prove those points.

“We’ll continue to work with Ecology to help them understand that there are TWO distinct climate areas in our state and that standards must be developed for each climate in our state,” Wood wrote in an email.

The Department of Ecology says its CAFO permits are currently up for renewal. Water quality permits must be renewed every five years.

“We had started that process by doing listening sessions and had planned to have a draft out for public comment later this month. We are reevaluating our schedule,” said Ecology spokesperson Colleen Keltz.

Currently, there are 26 permitted CAFO operations in Washington, according to Keltz.