How a chat in a Portland pub led to a trek to the tip of South America to find the southernmost tree. 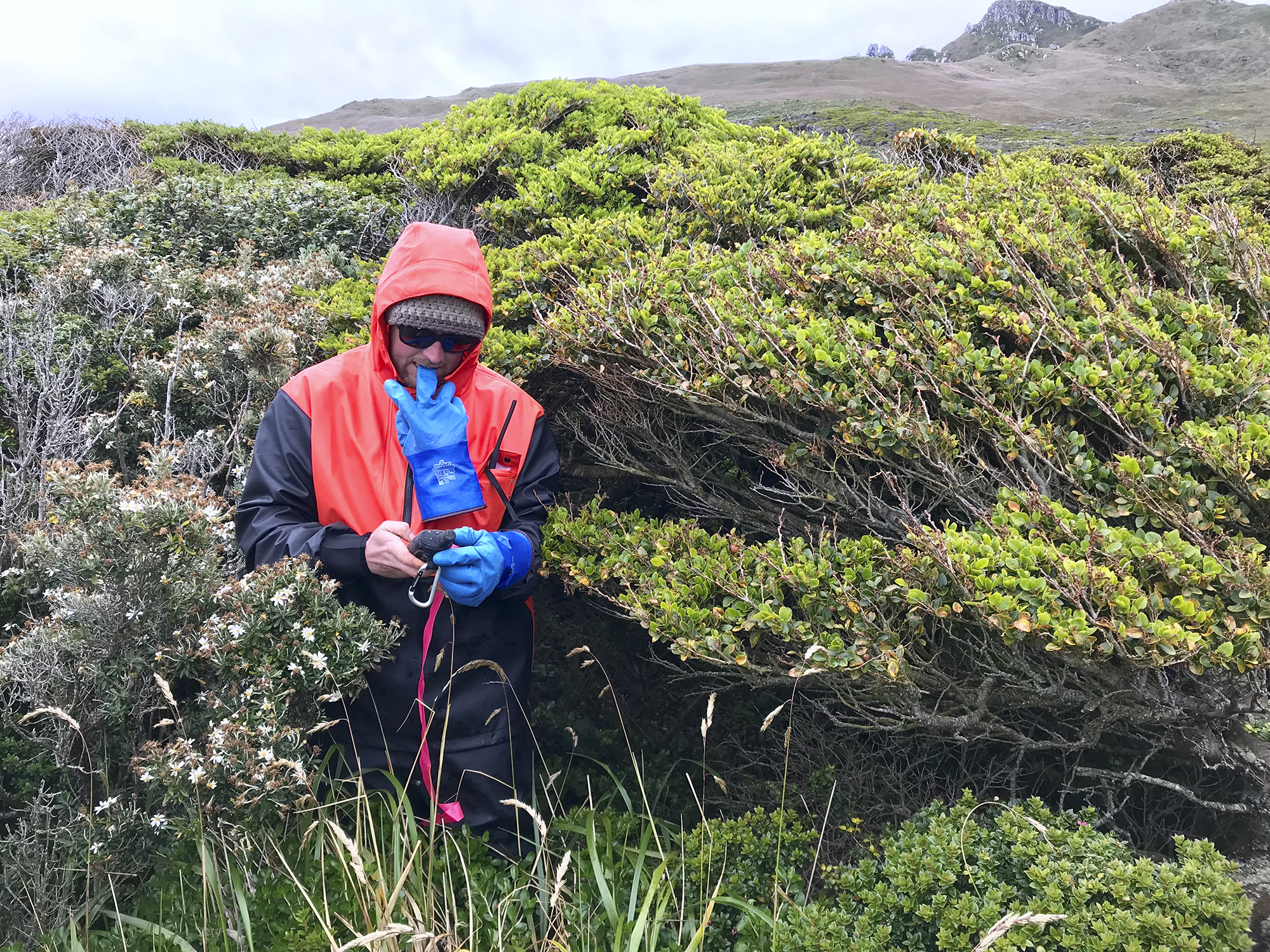 Brian Buma takes measurements along the intact edge of a large patch of trees on Isla Hornos, an island at the southern tip of South America. (Andrés Holz)

For scientists, building a true understanding of how climate change is affecting the planet is complicated. A conversation in a Portland pub led to one solution — find the tree at the bottom of the world and see how it’s being affected by rising temperatures.

Common interests had them chatting about everything from climate change to a study of the northernmost trees in Siberia. And that got them thinking.

This story was originally published at Oregon Public Broadcasting on Aug. 5, 2021.

The first part of their expedition was simple. Satellite imagery showed the southernmost tree was likely on Cape Horn at the bottom of South America. But once they got there, Holz said nothing could have prepared them for the conditions.

Winds were so strong and so constant that unsheltered vegetation grew sideways. They think ice crystals in the wind slice new buds, so only growth on the sheltered side of plants survive.

In some spots the team had to literally walk on top of trees to get around.

“Sometimes you would ... step on a branch and you thought it would hold and you would go all the way down to your hips or even to your chest. And then up again. Especially with heavy backpacks,” Holz said.

Walking wasn’t the only problem. Cape Horn is one of the most hazardous shipping routes in the world. There are the high winds, strong currents, icebergs and even waves known as greybeards, long, powerful waves that grow enormous as they travel around the world, unbroken by land.

Holz said just hauling supplies off their boat was hazardous: “For a couple of days we just had pasta but no sauce, because that was in a different box. And it was so risky to get in and out,” he said.

To be certain they found the actual southernmost tree, the team had to check the sea cliffs. That meant hiring a local chef who owned a 65-foot wooden boat. He let them know midvoyage that  he had never actually rounded Cape Horn before.

“That said, I was really dizzy,” he said. “And then looking via binoculars trying to find the actual tree ... we didn’t find anything, luckily, because otherwise we would have to climb down, rappel down and basically sample it.”

Rappelling down a sea cliff in winds of 40 mph or more was not something they wanted to do, although a professional climber was part of the expedition. During their six-day stay, they experienced winds of more than 85 mph and lost two tents.

But by using GPS and walking a grid, the scientists did eventually identify the southernmost tree. It was a Magellan’s beech and was actually among a small clump of seven trees south of the island’s main forest. 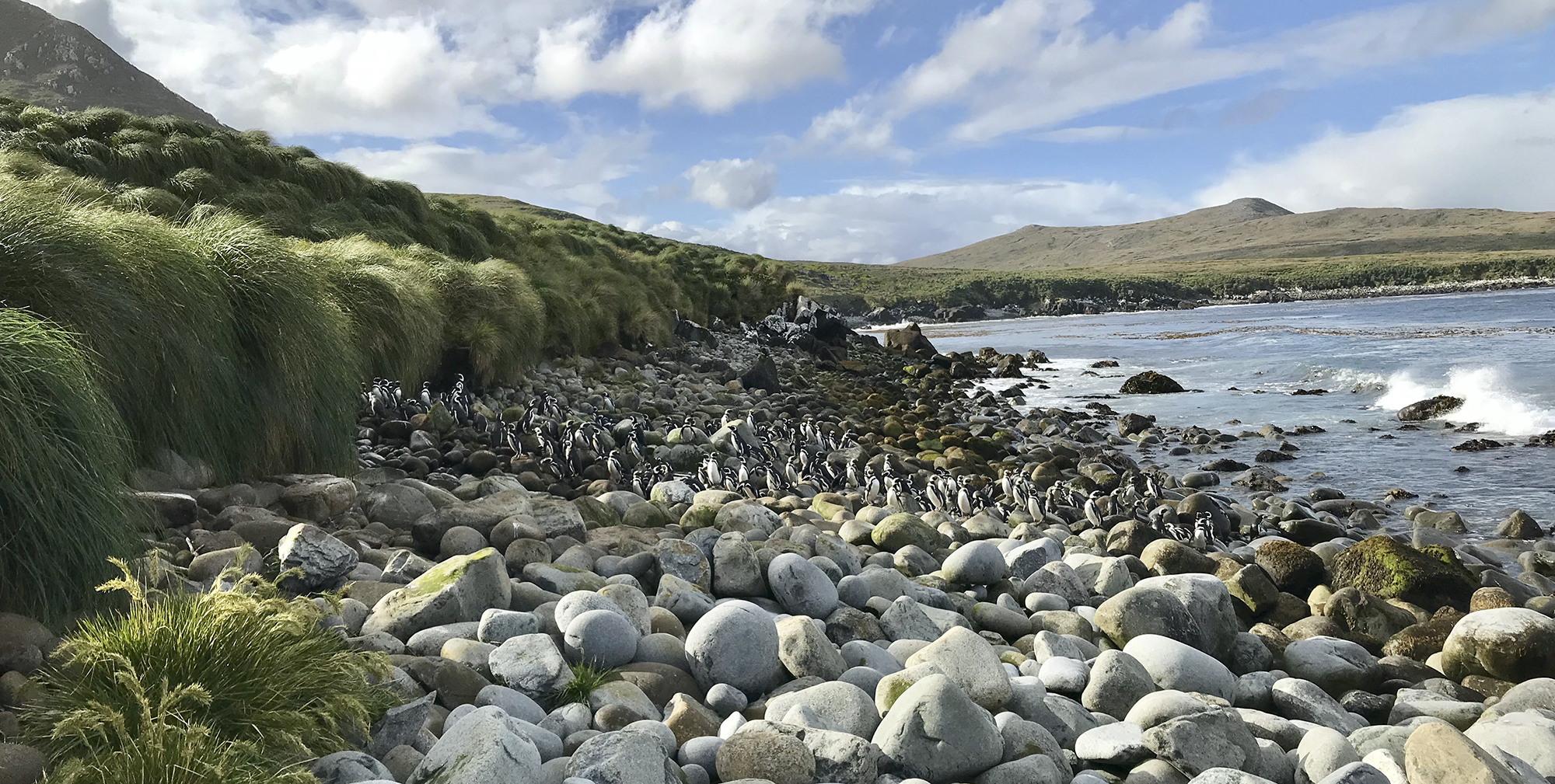 Penguins returning from a day of foraging on Hornos Island. Scientists think their guano provides nutrients for the world's southernmost trees. (Brian Buma)

Penguins returning from a day of foraging on Hornos Island. Scientists think their guano provides nutrients for the world's southernmost trees. (Brian Buma)

Holz said they decided these were the trees at the bottom of the world, rather than a collection of bushes, because their branches grew along one main stem — not multiple stems.

“The trees were all having that main stem, but it was all along the ground. And so you could see along 10 or 15 feet trees that could not go higher than 5 centimeters above the ground,” Holz said. “It looks like a bulldozer went over the tree. Totally flattened it.”

Holz took core samples and found the oldest trees were about 48 years old. They seemed healthy.

A big question for the team of scientists was why the tree line stopped with this particular clump. Holz said he doesn’t think it was because of the cold. The trees were next to the ocean, so temperatures stay fairly constant around 40 degrees. Snow also doesn’t usually stick. And scientists don’t think nutrition was a limiting factor either, because penguins regularly deliver fresh guano to the soil.

Instead, Holz said he thinks it’s the constant wind that stops trees from growing further south.

Now that scientists have baseline information for these southernmost trees, they hope to track the impact of climate change. Similar research in Alaska found that willow trees grew bigger in warmer temperatures. Their branches poked through the snow, which led to more grazing winter moose in the area.

Holz said studying a precise geographic location, like one tree in one spot, is expensive. But it gives scientists an objective window on nature and a baseline they can use to track change and rates of change.

The hope is to see whether the tree line is moving south and, if so, how quickly. One thought is that a bird might ferry the trees’ seeds to Diego Ramirez Island, 65 miles below Hornos Island. Those seeds might take root, perhaps eventually taking the title of southernmost tree even further south.