A local citizens group is fighting proposed changes to a ‘temporary permit’ that it fears could allow the waste to be dumped for decades. 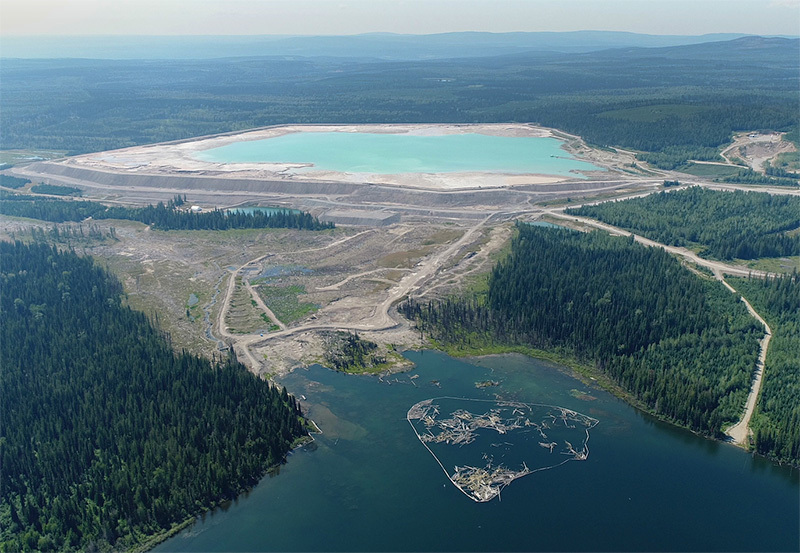 The view from Quesnel Lake toward Mount Polley Mine’s tailings pond shows the scarred landscape following a breach of the mine’s tailings dam on Aug. 4, 2014. Seven years later, the mine continues to deposit effluent into the lake via a pipeline. (Dogwood BC)

Doug Watt was sleeping the night the Mount Polley mine’s tailings dam released, dumping its contents into Hazeltine Creek, which flows into the west arm of Quesnel Lake near his home in Likely, British Columbia.

It was the early morning of Aug. 4, 2014, and Watt, who lives about four miles from the mine site, says he wasn’t aware of the breach until a 6:30 a.m. call from the local fire and rescue service woke him. The first thing he noticed was the sound.

“It was quite a shock,” he says. “We went outside, and you could hear it down the lake. It sounded like a distant Niagara Falls.”

The gold and copper mine deposited nearly 882 million cubic feet of mine waste into the Fraser watershed that day — roughly equal to the volume of water flowing over Niagara Falls every 2½ hours. It left a toxic slurry that remains on the lake bed today. Data showed the lake rose several inches overnight, Watt says.

Seven years later, mine waste continues to flow from Mount Polley into Quesnel Lake under a permit issued by the British Columbia government.

This story was originally published in The Tyee on Aug. 4, 2021.

That permit was meant to be temporary, a stopgap measure to prevent another spill while mine owner Imperial Metals developed long-term wastewater solutions.

Now a local citizens group is fighting proposed amendments that could allow mine waste dumped into Quesnel Lake well into the future.

“They have indicated now that they want to extend the discharge into Quesnel Lake indefinitely, for the life of the mine,” says Watt, a member of Concerned Citizens of Quesnel Lake.

That could mean decades — or longer.

Mount Polley began operating in 1997 with an expected 14-year lifespan. It shuttered operations for several years in the early 2000s as a result of low mineral prices. When the mine’s tailings dam breached in 2014, it had already reached its expected lifespan.

Less than a year after the disaster, in July 2015, Mount Polley returned to partial operations. The same month, it submitted an application to the province for short-term wastewater discharge into Hazeltine Creek and directly into Quesnel Lake via a 6-mile pipeline.

Permission for the permit amendment was granted later that year. In 2016, the mine returned to full operations.

In 2017, the province granted a permit that allows Mount Polley to deposit up to 1.8 million cubic feet of treated mine waste a day into Quesnel Lake — the equivalent of 21 Olympic swimming pools.

The permit allows the mine to dump an annual average of about 353 million cubic feet of waste into the lake, equal to about 40% of the initial spill volume.

Although the waste moves through a treatment plant before entering the lake, that system removes only solids, Watt says. It does not address dissolved chemicals, such as copper and selenium, which make their way into the watershed.

The company describes the dumping of water into Quesnel Lake as an “interim water discharge, to occur during the remaining mine operations,” reads a Ministry of Environment memo explaining the approval.

It adds that the company is “developing further plans for permitting long-term site water management for the post-closure phase of the mine.”

But as of this spring, plans for water treatment beyond the mine’s closure hadn’t been developed, according to a letter from the ministry to Imperial Metals.

In the May letter responding to a water management plan submitted by Mount Polley in November 2020, the Ministry of Environment noted that the mine’s proposed plan assumes that operation will continue until the end of 2031. It adds that the plan does not address water discharge beyond 2022 and “does not cover closure and post-closure phases of the mine.”

The mine’s current permit, intended to give the company time to investigate alternative water management, is set to expire Dec. 31, 2022.

A spokesperson for with British Columbia’s Ministry of Environment said the province received two applications from Mount Polley to manage excess water at the mine site. The first, received in March, would allow discharge into Quesnel Lake to reduce wastewater in the tailings storage facility “to empty the pit and allow active mining to restart.”

A second application would amend the effluent permit to extend the discharge of excess water to Quesnel Lake beyond Dec. 31, 2022.

No decision has been made on either application, the ministry said.

But residents fear that alternative solutions to dumping mine waste into Quesnel Lake will never be found.

“That’s one of the big concerns we had in that 2017 permit, that they almost immediately did not meet those permit conditions,” says Watt, a retired metallurgist who moved to the area to work at the mine in the 1990s. “They had a timeline to get reports and studies on alternative methods of treating and discharging water. For the most part, they did not meet those.”

The Tyee made several interview requests to Imperial Metals but did not receive a response.

The mine shuttered operations in 2019, again citing mineral prices, but is expected to reopen later this year.

According to a government infographic, the wastewater enters Quesnel Lake at a depth of 148 feet and 820 feet from shore, “where it is diluted by mixing with lake water as fast as possible.” The “dilution zone” is 328 feet from where effluent enters the lake, according to the permit.

But Watt says the mine’s water treatment plant is insufficient and can’t handle existing wastewater from the site.

That led to the company requesting a permit amendment to bypass the system altogether and dump untreated wastewater directly into Quesnel Lake.

“The water treatment plant they have is too small. It won’t even treat the amount of water that they’re permitted to discharge every year,” he says.

The Environment Ministry says the province’s Major Mines Office has initiated a joint application process with Mount Polley due to the scope of the proposal.

“This application is considered a major amendment as per the Public Notification Regulation and as result is subject to notification and engagement requirements,” a ministry spokesperson said. “The joint application process is expected to be extensive and will allow interested parties to review the application and provide comments … before any decision is made.”

A May response to Mount Polley’s surplus water management plan from the province describes how the company would bypass its water treatment plant to discharge waste directly into Quesnel Lake. It says the company’s modeling failed to accurately predict the amount of water that would need to be treated.

“The year-to-year accumulation of water shows that Mount Polley did not design the [water treatment plant] large enough or Mount Polley is not operating … at its design capacity all the time,” the letter says.

Local resident Christine McLean appealed the water management permit when it was approved in 2017, a move supported by about 60 residents who form Concerned Citizens of Quesnel Lake, in addition to West Coast Environmental Law, Change.org and several other environmental advocacy groups.

That appeal is still before B.C.’s Environmental Appeal Board, but McLean expects it to be heard later this year.

Ugo Lapointe, program coordinator with MiningWatch Canada, points out that depositing wastewater directly into the lake was never allowed in Mount Polley’s original permit, giving local residents a false sense of what they could expect from the nearby project.

“When they first agreed to this mine back in the late ’90s, they agreed to a mine that would not see any wastewater being released into their environment. That was the initial permit,” he says.

Instead, he says, the mine should provide full wastewater treatment and it should be released into a smaller body of water.

“We at MiningWatch Canada think this is poor practice, not the best practice,” Lapointe says. “Quesnel Lake is a very unique and pristine ecosystem. It’s also home to one of the largest salmon runs in British Columbia of the Fraser River watershed.”

He compares the proposed amendments to the water discharge permit to those allowed for Gibraltar copper mine, about 30 miles west of Mount Polley, which dumps up to 6.3 million gallons of untreated mining wastewater into the Fraser River every day — about half the amount allowed by Mount Polley — during the summer months.

“The reality is that there are alternative solutions,” Lapointe says.

The province should require a bond from the company that would ensure full water treatment prior to depositing it into the environment. Then, he says, the treated water should be deposited into a smaller water body, not a sensitive ecosystem like Quesnel Lake.

Even though Watts has been told that the lake’s water beyond the dilution zone meets Canadian drinking water standards, he’s skeptical.

“Many residents disagree with that, because we see changes in the water quality,” he says, adding that residents have noticed algae blooms never seen before and that water filters have begun frequently clogging up.

“We won’t drink it anymore. We used to drink the water when we first moved here because we considered it unpolluted, but now we consider it polluted, even if it meets water quality guidelines.” 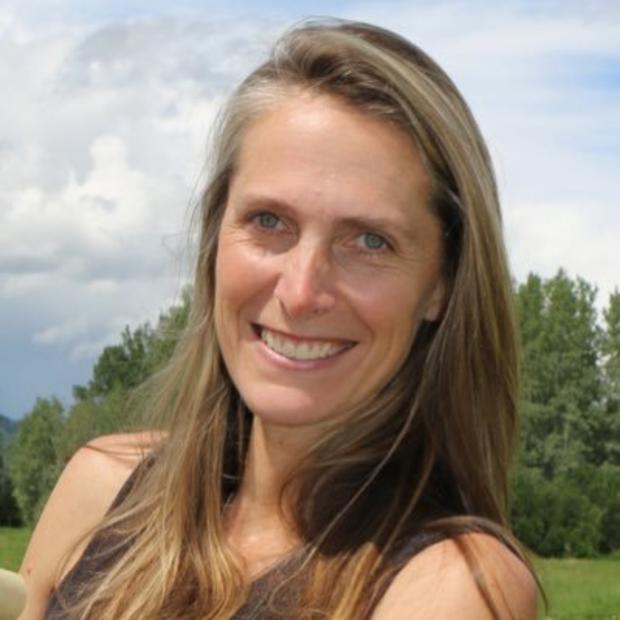 Amanda Follett Hosgood is the Northern British Columbia reporter for The Tyee. Follow her @amandajfollett.