To help salmon and free a culturally important stretch of the Skagit River, the Upper Skagit tribe demands that Seattle tear down the dam. 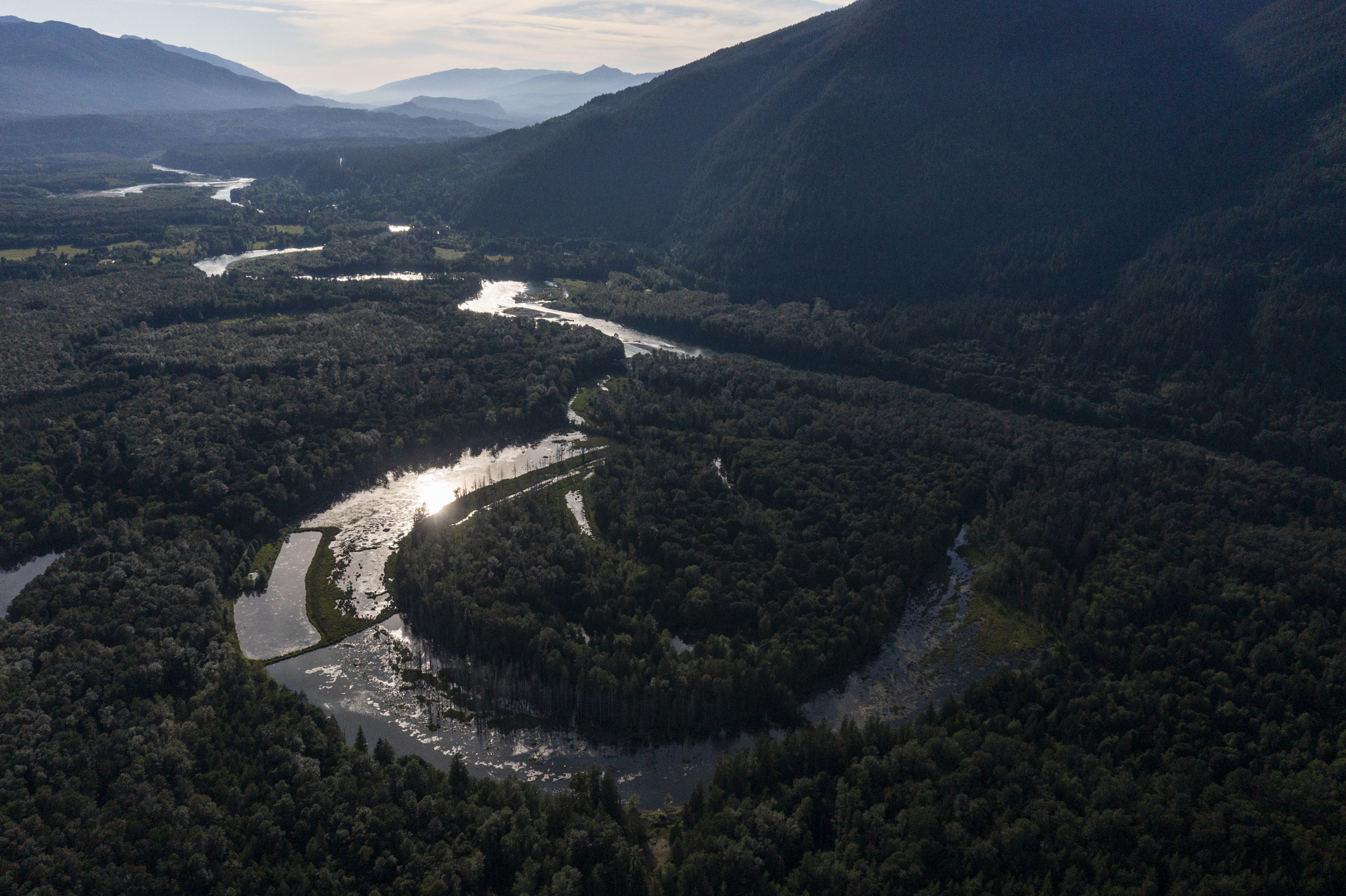 Barnaby Slough was once the channel for the main flow of the Skagit River. Since the installation of the dams and blocking of sediment flows, this side channel and many others like it have become disconnected from the main river, blocking salmon from accessing them. (David Moskowitz/High Country News)

Raindrops fell through gusts of fresh April air as clouds and mist draped the ridges above the Skagit River near the town of Hamilton,  a few dozen miles upriver from Puget Sound. Lifelong fisherman Scott Schuyler, an Upper Skagit Tribal elder and a policy representative for the tribe, was dressed for the weather in green rubber boots beneath an orange and yellow rain slicker. His 20-year-old daughter, Janelle Schuyler, in similar gear, hopped on board her father’s boat as he shoved off from shore in search of salmon.

“We hope to have a good day out here on the river,” Scott Schuyler said. He wanted not only to catch some fish, but also to use the trip as a learning opportunity for his daughter. “One of the things I like to instill in our young people, and my daughter in particular, is make a difference, effect change, while you can.”

Scott Schuyler’s family left their Skagit Valley homeland before he was born, in search of economic opportunity. The state of Washington had said it was illegal for them to fish in the Skagit. The tribe’s treaty-protected fishing rights had yet to be adjudicated, and state law forbade the practice.

Following the “Fish Wars” of the early 1970s, when Indigenous activists successfully fought for their fishing rights, the 1974 federal Boldt Decision affirmed the tribes’ treaty rights to 50% of the harvest in their “usual and accustomed grounds.” Schuyler’s family returned to the valley, and he reconnected with his culture and became a fisherman. “I knew immediately that this is who we’re supposed to be, who I am and who I will always be,” Schuyler said.

As he explored his ancestral homeland, Schuyler visited the upper Skagit River Valley, where he encountered the Gorge Dam. When the city of Seattle decided to dam the Skagit River in the early 1900s, it chose a sacred area known as “The Valley of the Spirits” without consulting the Upper Skagit, who at the time were fighting for their survival. “You look throughout the world’s cultures,” Schuyler said, “when they have their individual stories in their culture of how life began, this is it for us. I can’t explain the emotions of seeing this historic wrong, and the hurt.”

Now, thanks to the federal dam license renewal process, the Upper Skagit have an opportunity to push Seattle City Light to right that wrong by taking down the Gorge Dam. The Upper Skagit Indian Tribe is asking Seattle to conduct an official removal assessment for the dam, which has dewatered parts of a three-mile stretch in the Valley of the Spirits. Schuyler is leading the tribe’s effort. “There’s over 100 years of the river dewatered that five generations of Upper Skagit had to endure,” Schuyler said. “We don’t see the river flowing. There’s an eerie quiet that’s unnatural to us. You don’t have the sounds of the river singing.”

This story was originally published at High Country News on July 16, 2021.

The Upper Skagit believe the declines among the river’s once-abundant fish — the bull trout, chinook salmon and steelhead that once thrived here — are primarily a result of the Gorge Dam, which blocks fish from reaching miles of historic salmon habitat upstream and prevents the downstream passage of wood, gravel and sediment that are essential for the fish. The dam has also inundated a culturally significant area. “If you do this assessment, and if you remove one of these dams, well, you immediately take away all these harms for at least a portion of the watershed,” Schuyler said.

The Upper Skagit share federally reserved treaty rights to co-manage the Skagit River with the Swinomish Tribe, the Sauk-Suiattle Tribe and the state of Washington. The tribes must be consulted and their issues and interests taken into consideration as part of the relicensing process. But their consent is not required, nor can they insist that a study be completed. For the dam removal assessment to happen, Seattle City Light must grant the Upper Skagit’s request — which it has denied, even though the city has championed tribal rights in other contexts — or Federal Energy Regulatory Commission itself could mandate the study. Failing that, the Upper Skagit can file suit in U.S. Diistrict Court to attempt to have the assessment carried out. 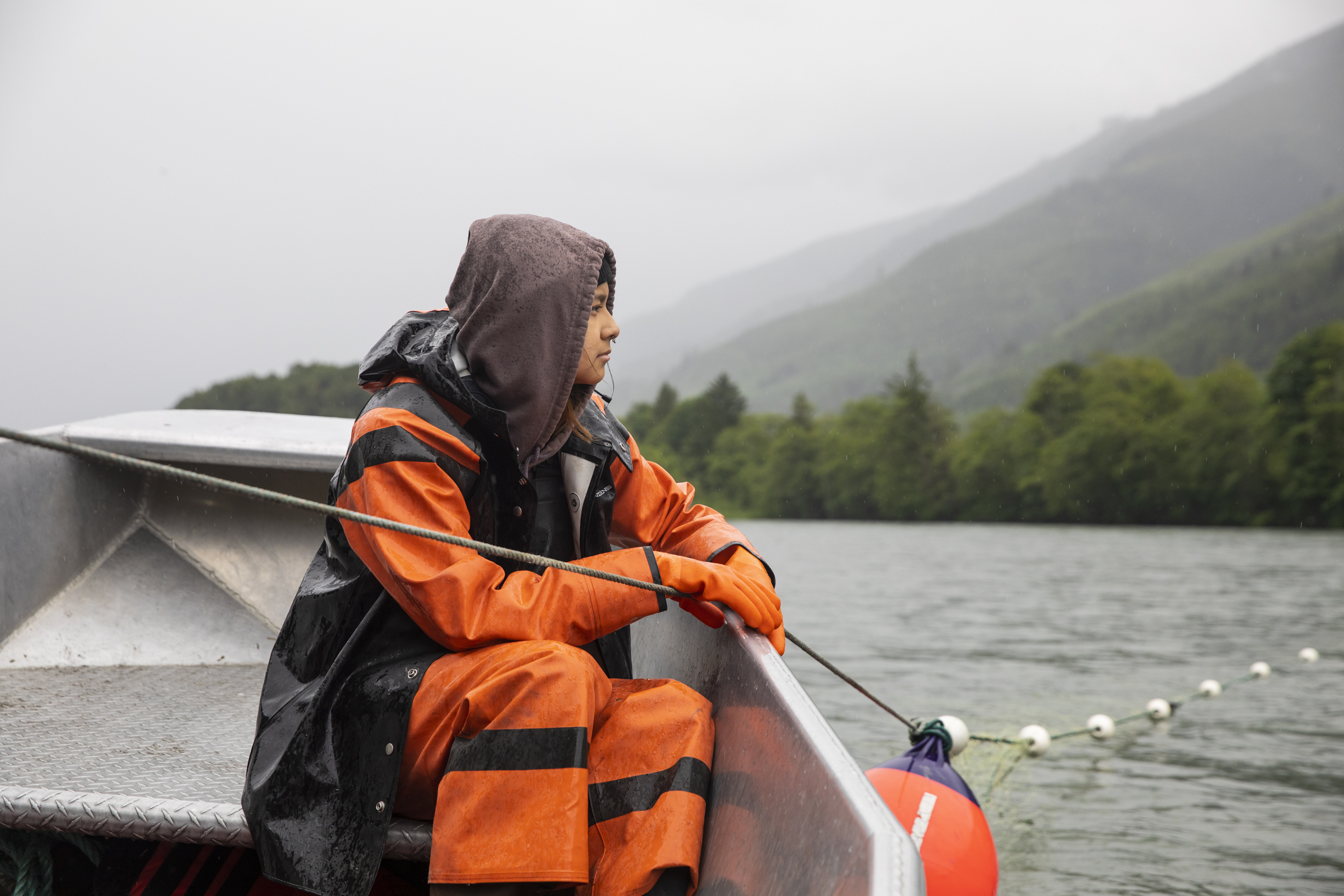 The Sauk-Suiattle Tribe did just that, filing a lawsuit on June 30 against Seattle City Light, arguing that the Gorge Dam blocks the passage of fish and, therefore, should not be maintained in its present condition unless a means for fish passage can be provided.

“Dams just aren’t good for salmon. If we can find another way to supply electricity to folks other than dams, I’m all for it,” said Jeremy J.J. Wilbur, a lifelong salmon fisherman and a Swinomish Senate member, speaking for himself and not on behalf of the tribe. “The time is now in order to keep salmon for future generations,” he added.

Back on Schuyler's boat, the rain continued to fall as Scott Schuyler cast his fishing net into the water. “We’ll just pray for some fish,” he said.

Janelle has taken action of her own on behalf of the Skagit’s salmon, gathering over 45,000 signatures for an online petition she started in 2019. She has also written to Seattle Mayor Jenny Durkan, asking her to consider removing the Gorge Dam. “I want you to know that carrying this knowledge of what the city has done here brings me great pain and sorrow every day with my understanding of what has been inflicted on the Upper Skagit people and our salmon,” she wrote. The mayor never responded to her, or, for that matter, to High Country News when asked for comment regarding the denial of the request for a dam removal assessment.

“They’re never going to understand,” Janelle said of Seattle City Light. “They don’t have years and years of lineage tied to this land, salmon and the water. It makes us who we are as people.”

On the boat, she watched her father with a subtle smile, then turned to look at the net, where her father’s gaze was fixed. A loud splash erupted in the mesh, and the silver flash of a big salmon’s tail arched and pounded the river’s surface, shooting droplets of water into the rain. “That’s unexpected!” Scott Schuyler exclaimed with a grin.

After hauling in the fish, Janelle said: “I know that the dam is coming down in my lifetime. It’s no biggie. I had an epiphany last time I was out on the water with my father, fishing. I was just thinking about the ceremony that we’re gonna have when the dam is removed, and the relief. It’s going to be great.

“I’m only 20. They’re gonna have to deal with me for a long time,” she added, referring to city officials.

“Never, never underestimate the resolve of this tribe,” Scott Schuyler said. “We’ve been here for 10,000 years. We’re gonna be here after these dams are long gone, and we certainly are going to continue to push them to do the right thing.”