A recent beluga whale sighting had Puget Sound agog. It wasn't the first time a whale visited a Northwest city. 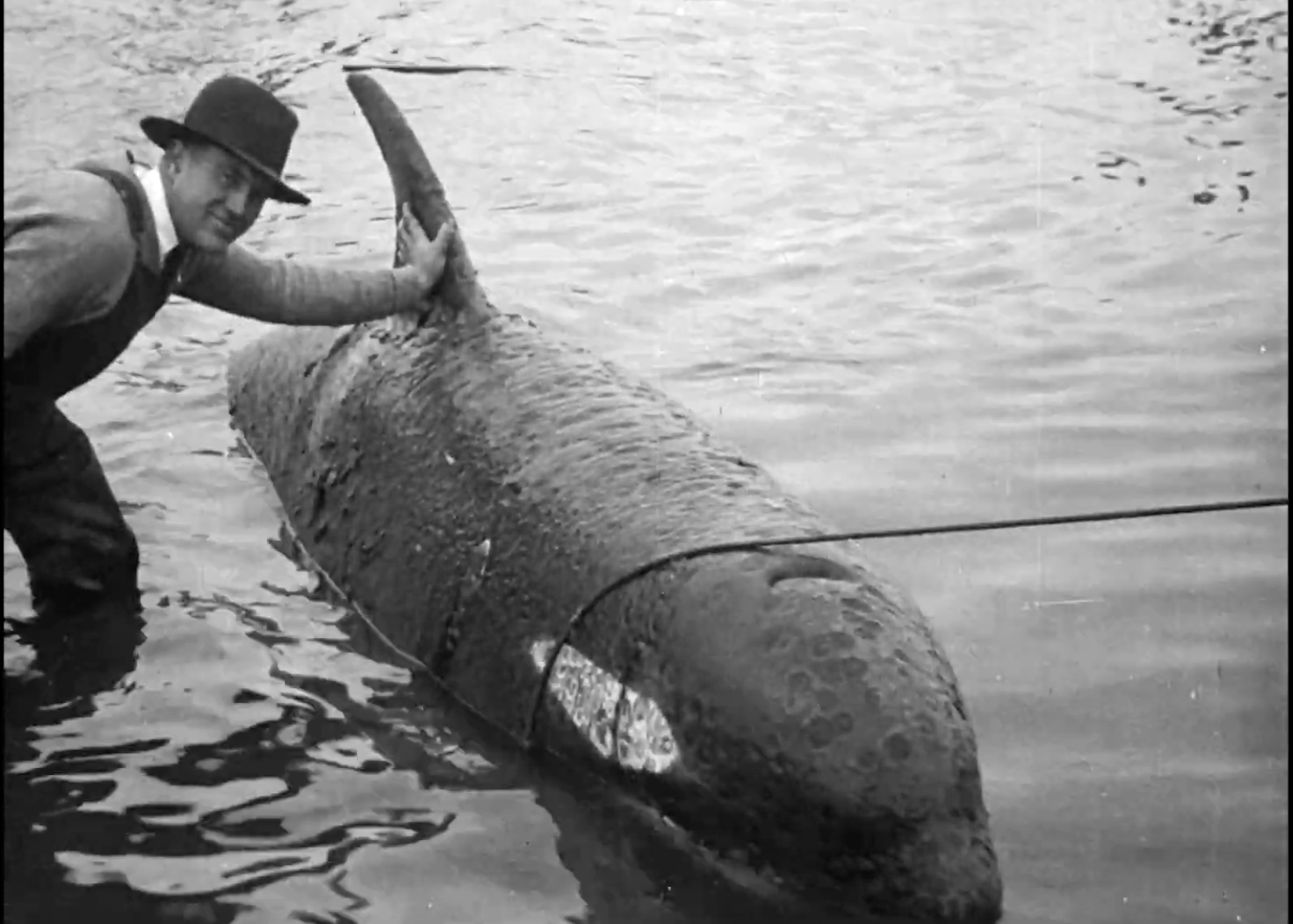 A man poses with Jimmy McCool’s Whale, aka Ethelbert, after it was harpooned by Edward Lessard and his son Joseph in this still from a 1931 Oregon Sound News newsreel video. (Courtesy of the Oregon Historical Society)

Last month, the appearance of a white beluga whale some 1,500 miles off course near Seattle drew hordes of media attention. Though rare, roving whales are not new in the Northwest — a beluga was seen near Tacoma in 1940.

But no “surprise” sighting was perhaps more thrilling — or tragic, or had a more bizarre end — than when a young orca swam up the Columbia River and surprised the citizens of Portland in 1931. It made national news, but also portended an era of opportunists taking advantage of killer whales for entertainment and profit, leading to the abuse and even death of these charismatic creatures. (The case of Namu, the killer whale caught and exhibited live on the Seattle waterfront in the mid-1960s, kicked off a sequence of such captures.)

Ninety years ago, on a mid-October day, a strange sea mammal was seen disporting off Portland. A scribe at The Oregonian named James McCool first reported the news, and for a while the animal was known as “Jimmy McCool’s Whale.” Unlike in Seattle on Puget Sound, orcas were a novel sight 100 miles up the Columbia and in urban Portland, no less. After some confusion about its identity, observers soon concluded it was a “black fish,” or killer whale, albeit a small one at 13½ feet. It was later determined to be a 4-year-old female. Why she was there no one was certain. She might have been a youngster separated from her pod, or maybe she had been chasing salmon and got a little carried away.

She was not the last time orcas would be spotted in the region’s rivers. In 1940, two large killer whales were spotted swimming around Swan Island in Portland's Willamette River, outracing a boat full of reporters chasing them. In 1948, four killer whales, apparently lost, traveled 12 miles of the Snohomish River. But none of these became the spectacle that McCool’s whale did a decade earlier.

The local buzz was incredible. The orca swam and spouted in the Columbia Slough near Jantzen Beach, the city’s popular amusement park. Thousands of Portlanders turned out to see this strange visitor. Popcorn stands popped up to feed the throngs. The “black fish” was soon renamed, quite possibly the first-time an orca in the Northwest received such an official — and distinctly human — designation. Several were proposed beyond “McCool’s whale,” including Moby Mary, Oswald and Egbert, but most folks and the media settled on “Ethelbert.”

In his book Orca: How We Came to Know and Love the Ocean’s Greatest Predator, University of Victoria historian Jason Colby writes: “Columbia Slough was no place for an orca. In addition to lacking saltwater, it was the main outlet for Portland’s sewage.” As days went by, Ethelbert seemed to grow sluggish, Colby writes, and its skin developed unsightly blotches.

Plots to capture and exhibit the orca were discussed. Some people wanted it kept alive and exhibited in a tank; others took potshots at the whale. Commercial fisherman considered orcas a menace, a competitor for fish. The Oregon Humane Society, meanwhile, decided it should be killed to prevent its suffering from starvation and disease; one suggestion was to blow it up with dynamite! (Oregon does not have a good record of combining whales and explosives.) Some naturalists contested that conclusion. There were plenty of fish in the river that an orca could eat, they said, best to leave it alone. A newspaper reported that Ethelbert was in “exuberant spirits.” 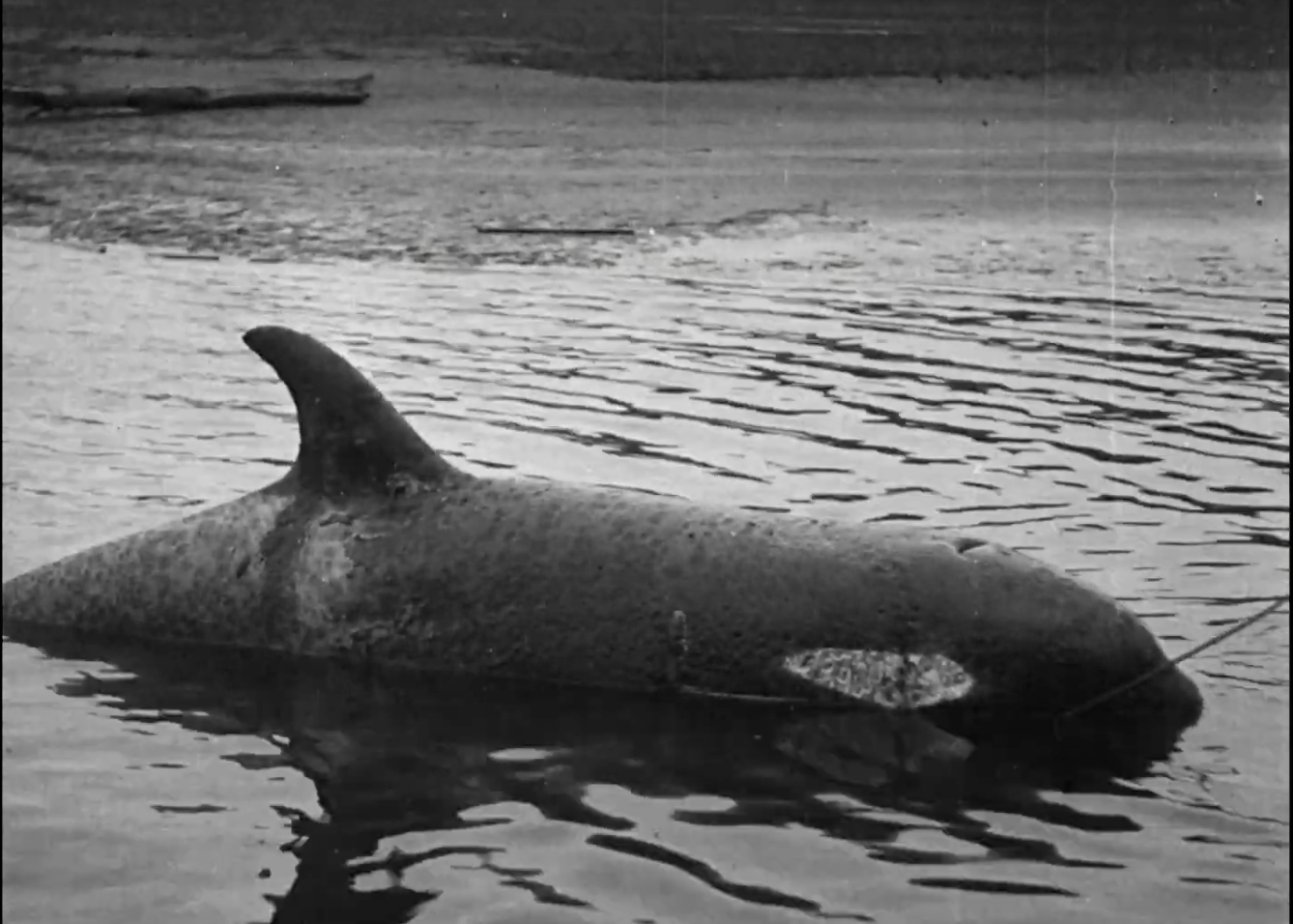 Jimmy McCool’s Whale, aka Ethelbert, is towed ashore in the Columbia river after it was harpooned by Edward Lessard and his son Joseph in this still from a 1931 Oregon Sound News newsreel video. (Courtesy of the Oregon Historical Society)

Jimmy McCool’s Whale, aka Ethelbert, is towed ashore in the Columbia river after it was harpooned by Edward Lessard and his son Joseph in this still from a 1931 Oregon Sound News newsreel video. (Courtesy of the Oregon Historical Society)

Nevertheless, after less than two weeks, a former whale hunter named Edward Lessard got into a boat with his son Joseph and killed Ethelbert with a harpoon; he planned to display its corpse to the public. Whaling companies were still operating in the region at that time, and the last commercial whaling station in Oregon didn’t shut down until 1965. Whales were generally seen as either a commodity or a pest in the resource economy.

To add to the tragedy, the orca’s body was seized by another set of men before the Lessards could recover their kill. These opportunists dragged Ethelbert ashore and made a small fortune in nickels and dimes displaying her corpse. “Hijacked for a side-show,” read a headline in The Oregonian. The Portland public was outraged at the killing. The dead whale made the newsreels, and was photographed hanging like an impressive fisherman’s catch. A naturalist and former Oregon state game commissioner, William L. Finley, said: “The public was cheated. This was wanton destruction of wildlife and ought to be punished.” Mark Werner, a former graduate student of historian Colby’s who has researched Ethelbert and written about her for the Oregon Encyclopedia, told me that he thought “Portland was largely ashamed at how it ended.”

But the Ethelbert saga didn’t end with her death and display. Charges were brought against the Lessards for violating fishing laws and “outraging public decency and morals.” The Idaho Statesman editorialized against the Lessards, dubbing them “the meanest men in the world.”

The corpse was placed in a custom-built tank filled with formaldehyde. A game warden who helped build the tank said it took almost all of Portland’s embalming fluid to pickle Ethelbert. The state seized the body, and lengthy legal wrangling ensued between the state and the Lessards, who were eventually found not to have violated fishing laws because Ethelbert was not a fish.

An agreement was eventually reached. The Lessards got custody of Ethelbert’s preserved remains. Instead of showing the body for nickels and dimes, they planned to tour with the pickled whale, which they apparently did for several years. Details are scarce, but that venture was apparently short-lived. For the next 30 years, Ethelbert dropped from sight and largely from public memory.

What do you do with an embalmed killer whale? A few weird whispers claimed that some body of a whale or fish was on Livingston Mountain, north of Camas and Washougal, on the Washington side of the Columbia. For about a decade, a man named Bill Farr, who worked at the Clark County Assessor’s Office, had heard such whale rumors and spent his spare time searching for its grave. He found property there that was associated with the Lessard family. Paperwork indicated the property had changed hands and that there was a provision regarding a fee paid for “storage of a fish,” money duly paid for years. The clue allowed Farr to zero in on a location; while searching with his daughter one day, she quickly came upon Ethelbert in her 15-foot-long box, lying in an overgrown clearing.

The discovery made headlines in The Oregonian in 1969. Incredibly, the whale was still largely intact — “firm and completely without odor,” the newspaper reported. Two years later, an Associated Press report said the box was rusted and the orca’s “coarse skin felt like bark to the touch.” The news accounts did not disclose the exact location, except to say it was partly obscured by trees that had grown up around it. A decade later, Werner, the researcher, says some timber inspectors dug a large pit and buried Ethelbert at last.

If her specific location was not reported, Werner says local lore knew where she was in the years before her burial. There are rumors that high school kids found their way to the site. A few are said to have taken some of the orca’s teeth as souvenirs.

That, Werner says, could be important.

John K. Ford, an expert on sea mammals who has done pioneering research on killer whales in the Pacific Northwest, concurs: “A tooth could tell us quite a bit — it’s possible that DNA could be extracted, which could provide information on ecotype and population,” such as whether Ethelbert was from the region’s northern residents orcas, the southern residents, the roving Bigg’s population or offshore orcas further out in the Pacific. The teeth could also yield clues that could determine Ethelbert’s age through so-called “teeth rings” and isotopes that may provide clues about her diet. “It would be interesting to see if a tooth can be turned up!” Ford says.

So, while she is buried far from the sea on a forested mountain, she might still have a story to tell about her life and origins.