‘When the earth shakes, your neighbor is going to be your first responder.’ 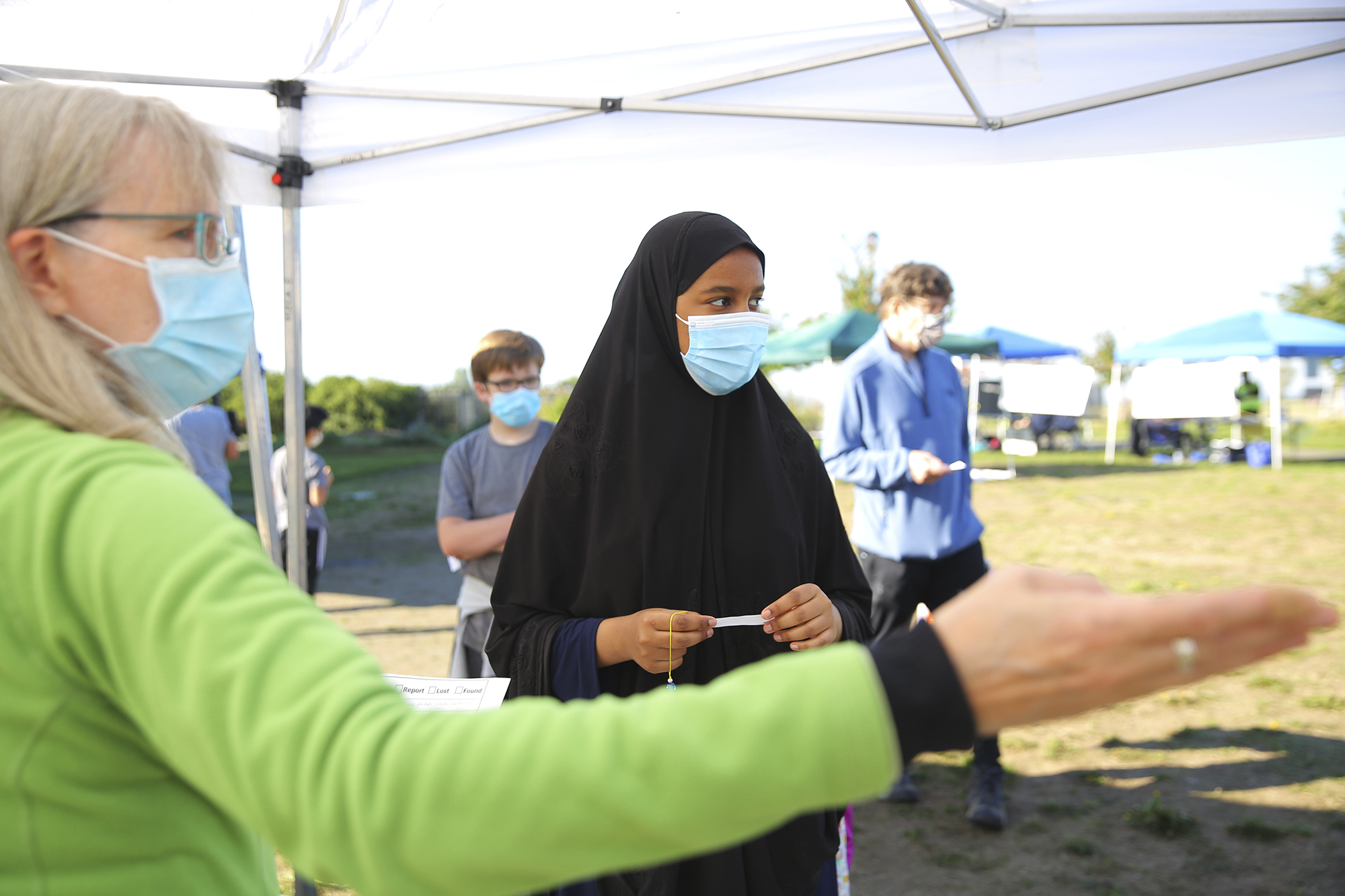 Volunteer Gabrielle Gerhard directs Hidaya Abdinur, 15, where to go as they act out scenarios during a simulated earthquake drill put on by Seattle's Emergency Communications Hub, Sept. 25, 2021, at Jefferson Park. (Genna Martin for Crosscut)

On a normal day, Karen Lewis wouldn’t expect to lose her dog, need dialysis or develop amnesia on a neighbor’s lawn. But in the span of a few hours on a summery Saturday morning in September at Seattle’s Jefferson Park, she has play-acted all of these scenarios.

Ryan Iwaszuk, 11, has accompanied Lewis during some of the day’s travails.

“I found this woman walking around my property, and she was very confused!” Iwaszuk says, holding Lewis’ hand and valiantly taking on the role of a homeowner who found her.

Lewis and Ryan were pretending for the sake of an emergency preparedness drill. With dozens of other volunteers, they acted out the kinds of situations they might encounter in a Seattle-area natural disaster. Seattle residents live under the constant threat of natural disasters. Volcanic eruption. Earthquake. Wildfire. Still, it’s hard to imagine navigating a disaster without physically experiencing what could go wrong.

“Going ‘method’ for a day is probably your best bet,” says Kate Hutton, communications coordinator with the Seattle Office of Emergency Management.

That Saturday, passersby milled at the sprinkling of white tents and tables set up on the cusp of the park’s soccer fields by a network of neighborhood-level disaster response community groups, the Seattle Emergency Communication Hubs Network.

This network, made up of hubs throughout the city, was created after the 6.8-magnitude Nisqually earthquake in 2001 that felled buildings and contributed to at least one death and hundreds of injuries. Residents realized Seattle’s few hundred emergency responders can’t tend to everyone in a crisis, and that citywide communications failures are possible. Residents may organize with their immediate neighbors, but entire neighborhoods would need to set up centralized areas where people can trade information and resources. 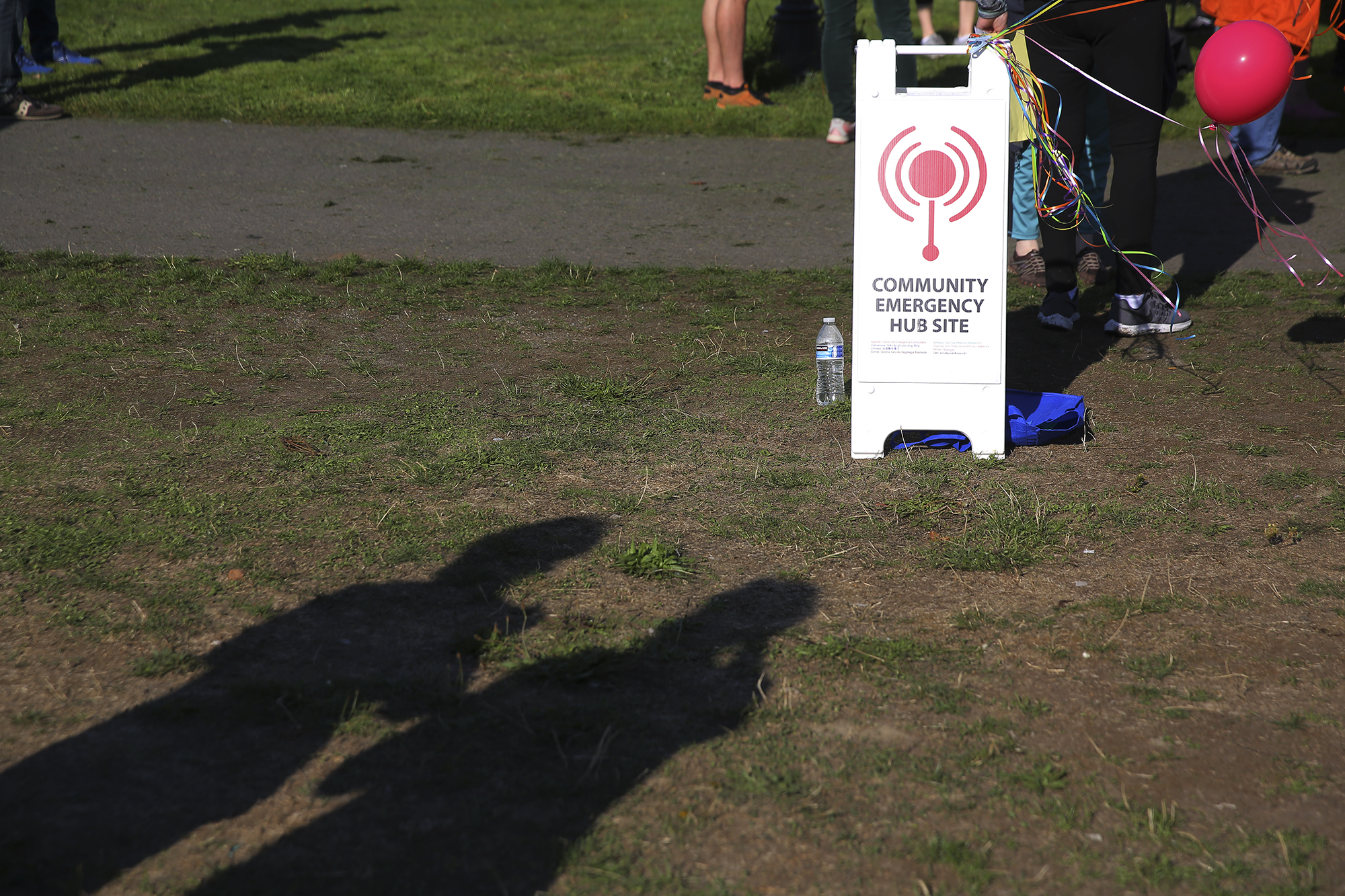 Volunteers participate in a simulated earthquake drill put on by Seattle Emergency Communication Hubs Network, Sept. 25, 2021, at Jefferson Park. The exercise is meant to help hub volunteers and the public be better prepared for natural disasters or other emergencies. (Genna Martin for Crosscut)

Volunteers participate in a simulated earthquake drill put on by Seattle Emergency Communication Hubs Network, Sept. 25, 2021, at Jefferson Park. The exercise is meant to help hub volunteers and the public be better prepared for natural disasters or other emergencies. (Genna Martin for Crosscut)

There are 66 volunteer-manned hubs across Seattle neighborhoods in anticipation of a crisis, and dozens more designated unmanned hubs where people are likely to meet. About 120 people are on the hub captain’s distribution email list, and 1,700 people receive the general hub newsletter.

For about the past six years, the hubs have hosted an annual field exercise to streamline how each will assist people through problems liable to happen in a disaster and all communications are down. A major earthquake along the Seattle Fault would result in building collapses and large fires that cause mass casualties — the kind emergency services would prioritize. What the hubs practice for is, mostly, how to help everyone else.

“When the earth shakes, your neighbor is going to be your first responder,” says Hutton of the Office of Emergency Management.

At the field exercise, hub volunteers recruited family, friends and strangers to act out hundreds of scenarios they might encounter in the days after an earthquake. Between 30 and 35 actors went through about 225 scenarios over three hours with about 25 hub volunteers, as dozens of community members wandered through the event with interest.

Seattle Emergency Communication Hubs Network co-founder Cindi Barker appeared to delight in finding new ways to test the volunteers. “By George, our volunteers are here. … Let’s throw a bunch of people at it and see if we can break it,” says Barker, who organized the event.

Actors were met by Deborah Witmer — a vulnerable populations planning coordinator with the city who previously worked as a theater stagehand — who gave them scenarios, such as requesting help for a partner experiencing a medical emergency or offering use of a meat smoker to anyone with spoiling meat.

The actors strode up to a volunteer greeter, who directed them to a tent where people could handle their theoretical problem. From there, they pingponged between information services, volunteer coordination, medical and other stations where they pretended to offer spare supplies, seek out medical help, share updates on emergency management operations and fill out forms with ad libbed information. A handful of them ended up sending messages to or from the city through volunteer ham radio operators at the Seattle Auxiliary Communications Service table.

Some scenarios barely required relaying a message; the most audacious asked volunteers to figure out what to do when firefighters told them their stations were possibly in the path of a landslide or to help a bus full of stranded kids from Issaquah call home. Actors ranged from middle-school-aged Scouts and firefighters to hub volunteers and Jefferson Park recreators who happened upon the excitement at random and gave improv a go. 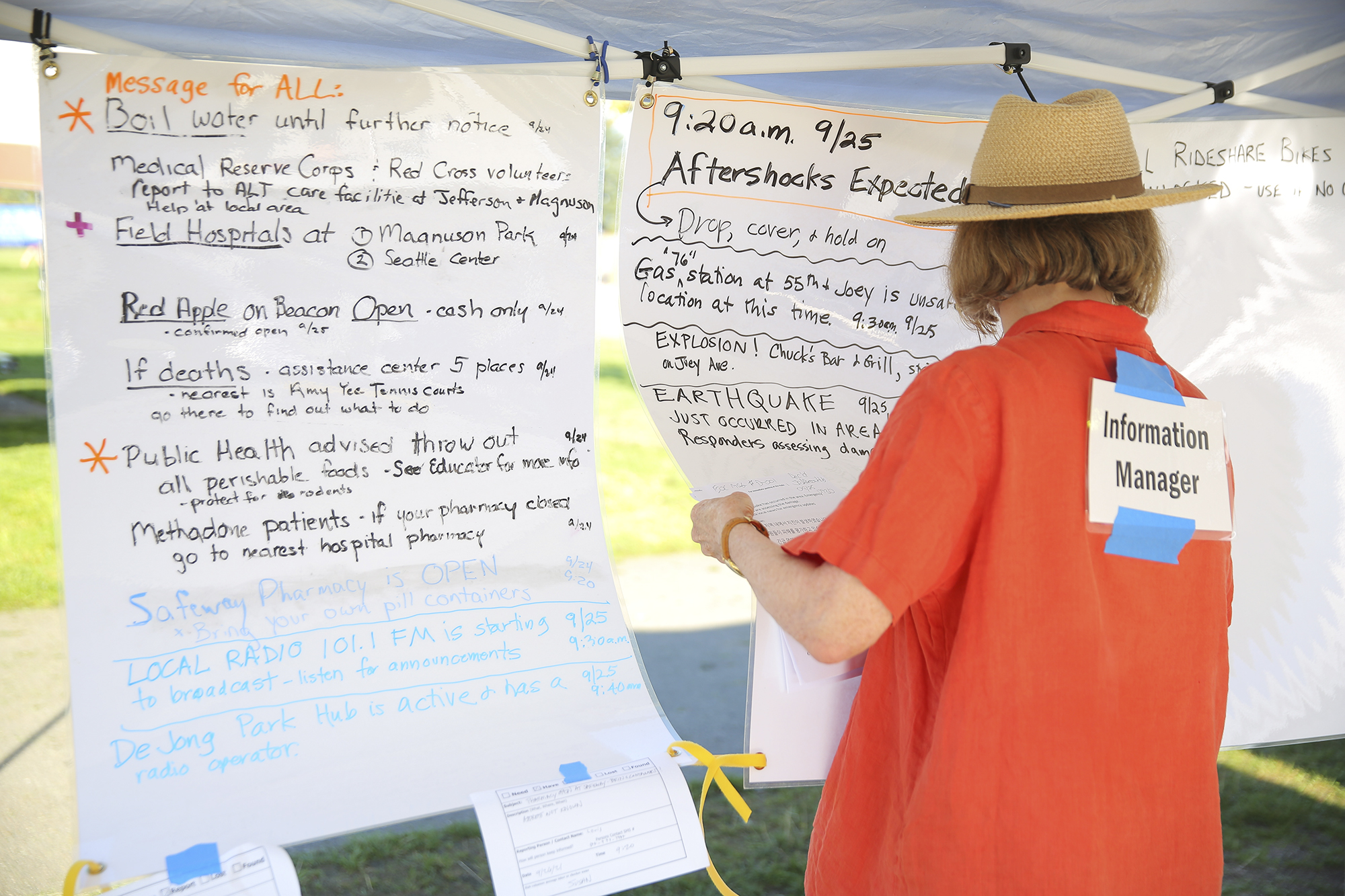 Hadiya Abdinur, 15, didn’t expect to become a retired trauma nurse. She biked over to the park with her siblings to get some exercise and stumbled upon the tents. She thought they were part of a community yoga event, and she decided to participate. She hadn’t thought about emergency preparedness before. “This is making it a lot more real right now,” Abdinur says. “This is fun. I’m not sure it’s supposed to be fun, but…”

Participants tried their best to make it feel real, some reflecting the panicked, discordant word vomit of a real emergency scenario that challenges volunteers to respond compassionately.

“Seeing it in action puts all the pieces together and makes it make a lot more sense,” Leone says. 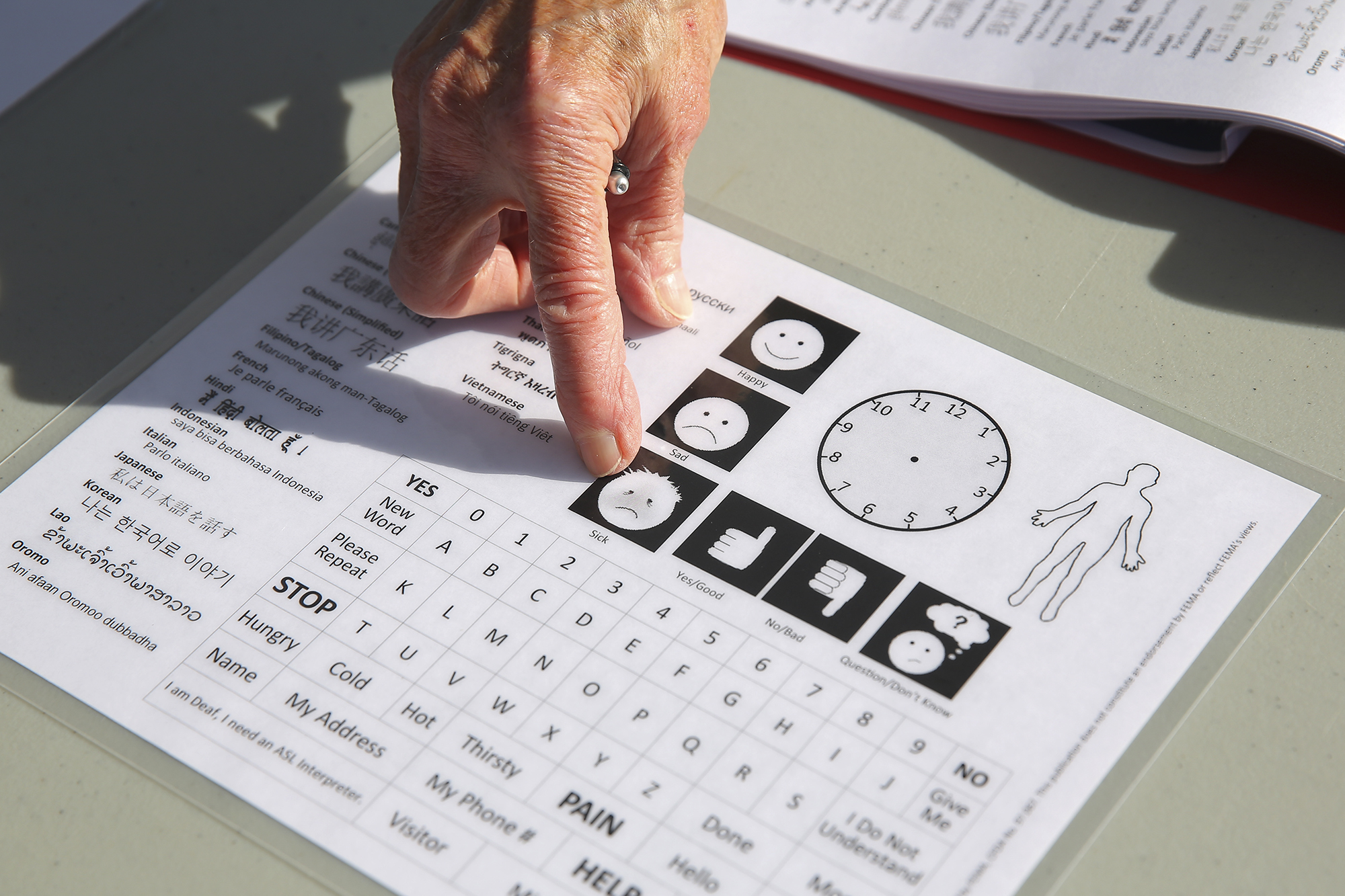 “It’s not like we can provide any concrete resources by ourselves,” adds Lewis, a Central Area resident. “But in disasters, communities come together, and we’re figuring out the glue ahead of time so we can be ready to facilitate that help.”

Barker, the co-founder of the hubs network, says she prays the Seattle Fault earthquake won’t happen in her lifetime, but believes practicing for it is worthwhile. Regardless, the work makes neighborhoods stronger. They’re role-playing to prepare for a disaster, yes, but also building community.

“What I’m saying is, get to know your neighbors,” Barker says. “Think of who you can help. Plug back in with the people around you, and there will be a stronger community no matter what.”

by / August 2 /
Inside Crosscut