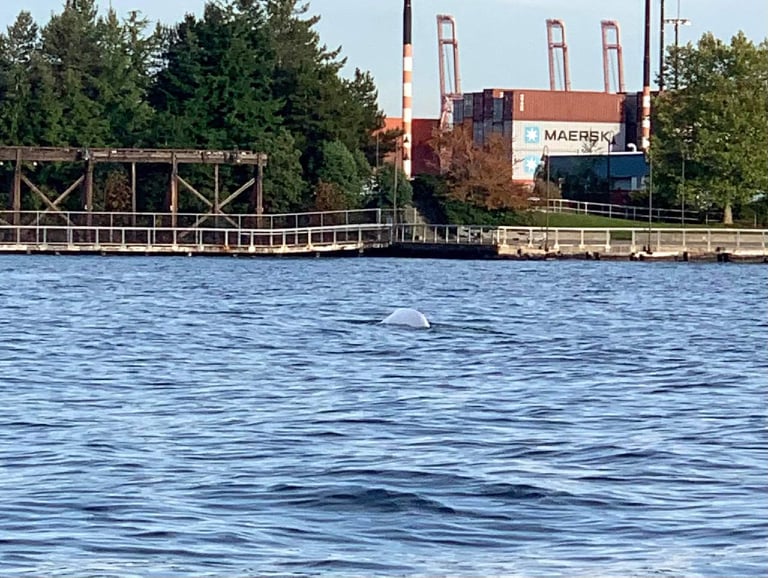 After sitting on the windless waters of Commencement Bay on Sunday, Jason Rogers and his friends joked they had picked the wrong day to go sailing. Then came the whale.

At first glance, the party assumed the snow white hump belonged to an orca. But while watching it move, something clicked for them: That could be a beluga, an  Arctic- or sub-Arctic-dwelling whale not officially recorded in Washington state since 1940.

It would be an obscure sighting of the species. The closest beluga population, which lives at least 1,400 miles away in Alaska’s Cook Inlet, is endangered and covered under the Marine Mammal Protection Act.

Rogers’ wife, Amy, recorded a video of the encounter. The couple posted it to a local Facebook group and sent it to a conservation monitoring organization, Orca Network. Orca Network received the video at 8:34 p.m. Oct. 3 and was “99.9% sure it was a beluga,” says Orca Network co-founder Howard Garrett. But given how rare that would be, the network sought identification assistance from NOAA Fisheries and a host of groups involved in marine mammal stranding response and veterinary science.

Various other reports trickled in, with area residents looking for confirmation that they weren’t hallucinating a “bulbous figure.”

Shannon Felix saw the whale, too, while kayaking Monday evening with her husband and dog in Elliott Bay, near Jack Block Park. “At first I thought it was a sea lion, but it was completely white,” Felix says. “Then it breathed like a dolphin and I thought, albino harbor porpoise?”

Rogers woke up to an email Tuesday confirming that he and his friends had shared space with a beluga.

“How cool is it to see an animal that hasn't been observed in our waters for over 80 years!” Rogers says. “But how sad is it, too? The whale must be horribly lost and my wife [Amy] and I are concerned for its safety and hope it can find its way back home. My wife and I are left with this feeling that we are connected to something so awesome and want to get all the updates about it. Like, how's it doing? Is it safe? Did it find its way home?”

Rogers isn’t the only one with lingering questions and concerns about the interloping beluga — both in what its presence here means and whether it will be OK.

Social butterflies by nature, a beluga that's alone and more than a thousand miles from home raises a yellow flag. Researchers are looking into the ways health and availability of prey may have played roles in this sighting.

“Marine mammals are apex predators and their health and behavior are always telling us about the health of the ocean as a whole,” says Casey Mclean, a veterinary nurse and executive director of Sealife Response + Rehab + Research (SR3). When she realized a beluga, whose English name derives from a Russian description of its color, was in our midst, her first thought was shock and sadness. “This is another indication of how our oceans are not healthy and the wildlife are suffering,” she says.

“When things are way out of their range I get concerned first off,” says Kersti Elisabeth Muul, a conservation specialist in Tacoma and member of Seattle Audubon’s conservation committee who has been keeping tabs on the whale through friends and social media. “Like every other lover of all things wild, I get excited, too. It's a mixed bag of emotions and a lot of times a warning.”

Michael Milstein of NOAA Fisheries says that, given how far the whale has traveled, he and his colleagues are concerned the animal may be ill, a worry when a whale is outside of its normal range. “Additional people around the animal would likely cause stress, so we do want to encourage people to stay away,” he says. As is the case with orcas, boat noise can agitate belugas and make it hard for them to navigate and feed. While belugas sometimes approach people out of curiosity or to play, that can be dangerous to both the whales and people, Garrett says.

NOAA Fisheries is working with the Cook Inlet Beluga Whale Photo-Identification Project to see if any of the pictures match those in the catalog of whales from Cook Inlet and Yakutat Bay, Milstein says. “So far, image quality has not been of high enough resolution,” he says.

Milstein says NOAA Fisheries prefers that people alert the agency so that experienced researchers who are allowed to approach whales under scientific permits can take photographs to help with photo identification and behavioral and health assessments without agitating the whale.

“[We] were hoping [Rogers’ video] wouldn't go viral on social media so have been keeping it quiet/safe for a while, but the cat is out of the bag,” Orca Network co-founder Susan Berta says in an email. “We want to get the word out to members of our sighting network and the public, so they know where to report it, but don't want everyone out in their boats looking for it!”

NOAA Fisheries is aware of only one whale at this point, and Milstein says more are unlikely.

One-off sightings of belugas in curious places do happen, including a 2020 sighting near San Diego. The beluga in that scenario likely did not survive its venture beyond its home waters.

A NOAA Fisheries survey in the Gulf of Alaska, published in 2000, found 28 instances of beluga sightings in waters south and east of the Alaskan Peninsula, excluding Cook Inlet. Kim Shelden, one of the paper’s authors, says there have been a few more reports since then in the Western U.S., mostly in southeast Alaska, as well as the San Diego sighting.

A local biologist, Florian Graner, claimed to have seen a beluga in Saratoga Passage a few years ago, Garrett says, but wasn’t able to take photographs.

While scientists are hesitant to extrapolate meaning from single events, Milstein says NOAA Fisheries is investigating the influence climate change may have had as well.

“In this case and many other past examples of unusual occurrences of single sightings, I tend to not assign big interpretations,” says John Calambokidis, a research biologist with Cascadia Research, who assisted with the beluga species identification.

Garrett says it would seem counterintuitive that climate change would prompt a move southward when belugas prefer northern latitudes. But he says it’s possible, if a lack of prey in its usual northern foraging areas drove the whale in our direction. In recent years, gray whales — which have been dying in large numbers — have stayed longer to feed in Puget Sound and off the Washington coast, he notes. “[That] could also possibly indicate issues with food sources in the northing feeding areas as well,” he says.

Employees of Point Defiance Aquarium in Tacoma reported seeing a beluga in the spring of 1940, which they followed in a boat for about a mile along the shore. “We are inclined to believe that the whale … was a white whale or beluga, far removed from its native haunts. To the best of our knowledge, the species has not previously been seen south of Cook Inlet, Alaska,” write Fish and Wildlife Service employee Victor B. Scheffer and historian John W. Slipp in a 1948 publication of The American Midland Naturalist.

With the beluga moving northward but still in Puget Sound, marine mammal response groups are coordinating their efforts in the event the whale needs help or sticks around. Mclean, the veterinary nurse, says the stranding network has had conversations about tracking and health assessment. The network is made up of agencies like the Washington state Department of Fish and Wildlife and NOAA Fisheries and volunteers coordinated by wildlife monitoring groups and veterinary outfits. Most recently, the beluga was reported near Bremerton on Oct. 5.

Stephanie Norman, a veterinary epidemiologist involved in the beluga identification, says no one has done a health assessment yet because of the pace of communications. “The tricky part has been obtaining real-time sightings,” she says, with groups like NOAA and Orca Network receiving word of a sighting a few hours after the fact, by which time the whale has moved on. “That's about all we have right now. So it's a waiting game, kind of like whack-a-mole.”

Mclean says any actions will be coordinated with NOAA Fisheries. “The decision and logistics of attempting to help a wild, free-swimming whale are extremely difficult and not taken lightly," she says. 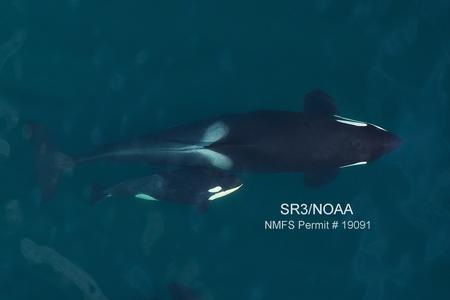 Here’s what pregnant orcas are up against in Puget Sound

Tahlequah’s baby bump has whale watchers excited. But is it too soon to celebrate? 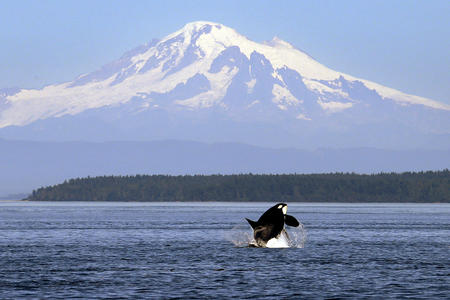 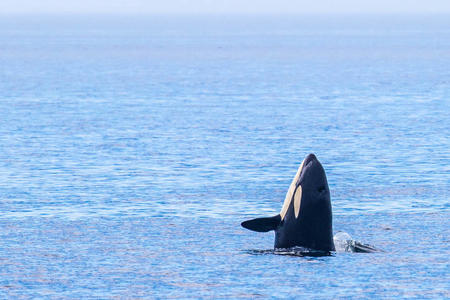 A lifelong visitor to the San Juan Islands reflects on the southern resident orcas, changing ecosystems and the passage of time.

Here’s what pregnant orcas are up against in Puget Sound

Tahlequah’s baby bump has whale watchers excited. But is it too soon to celebrate?

A lifelong visitor to the San Juan Islands reflects on the southern resident orcas, changing ecosystems and the passage of time.