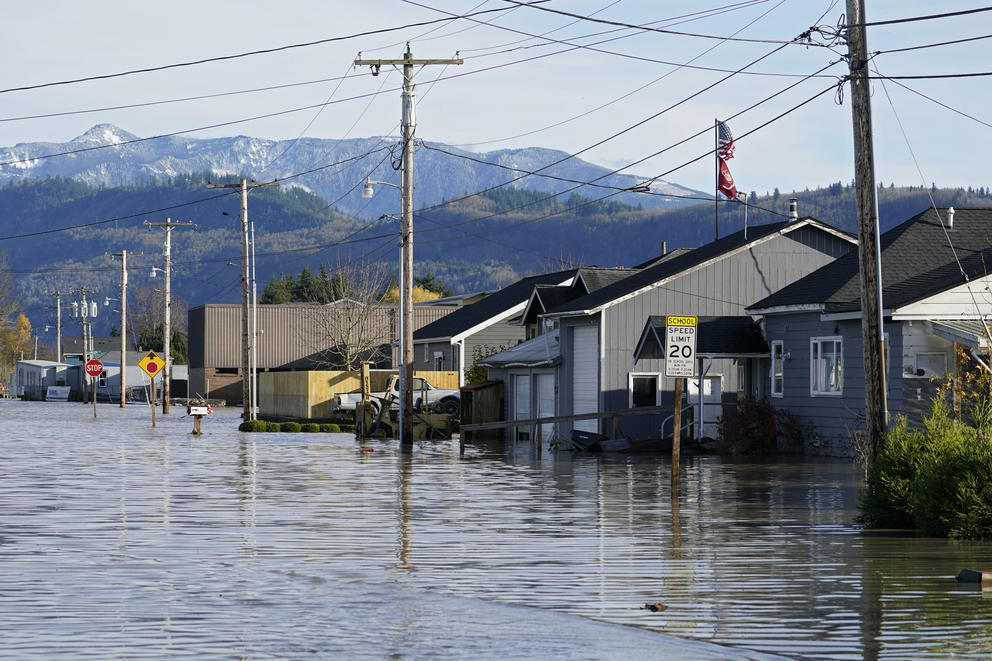 Standing outside his house in Blanchard in Skagit County, water up to his thighs, Kevin Morse watched in awe as a few salmon — usually found in a nearby creek — swam across his driveway. His son spotted several more later that night while ferrying friends across the property in a canoe.

Morse is just one of thousands of people across Western Washington and British Columbia who experienced severe flooding in mid-November. A potent atmospheric river storm — a long, narrow corridor of tropical water vapor that, when forced upward by obstacles like mountain ranges, condenses and sheds moisture — dumped massive amounts of rainfall, sometimes up to half an inch an hour, on the region. Bellingham received more rain between Nov. 14 and 15 than it usually does in the entire month. Rivers like the Skagit and Nooksack spilled over their banks, and salmon, like the ones Morse saw on his driveway, were washed out of their streams. Mudslides wiped out roadways, and three out of every four homes in Sumas in Whatcom County were damaged by floodwaters. At least five people died.

As communities turn to cleanup efforts and brace themselves for yet more rain, experts say that the flooding could have both positive and negative ecological impacts on salmon.

Salmon, a keystone species in the Pacific Northwest, are an important food source for 138 other species, including orcas. They’re also an essential component of regional tribes’ culture and sustenance, and they support an estimated 16,000 commercial and recreational fishing jobs.

FISH OUT OF WATER: Salmon spotted swimming across the road as days of heavy rain results in flooding along the Skokomish River in western Washington state. https://t.co/lvWQQwgZGC pic.twitter.com/zK5eykC27z

Salmon already face numerous threats, including warmer waters caused by climate change, habitat loss, blocked migration routes and toxic stormwater runoff. Five species of salmon call Washington home. Sockeye, coho and chinook are locally endangered, while chum and pink are not. A 2020 report concluded that Washington’s salmon “remain on the brink of extinction.” It doesn’t help that this year has already been rough for fish: A record-breaking heat wave in June caused widespread ecological fallout, and in September, warm water, low flows and bacteria killed thousands of endangered chinook before they could spawn in the South Fork Nooksack River. Treva Coe, a fisheries biologist and watershed restoration program manager with the Nooksack Indian Tribe, said the heavy rains could make salmon numbers dip further. “We do know from data on our populations that years with low survival are associated with years with high flows and large floods, so we’re really concerned that this year class survival is going to be low, if not wiped out,” said Coe.

A few days after Morse saw salmon swimming down his driveway, they became food for eagles and raccoons. Salmon are anadromous, meaning they are born in rivers, spend most of their life in the ocean, and then return to freshwater to spawn before they die. Chinook, pink and sockeye salmon were spawning or had already spawned before the storm, meaning they were most likely the fish Morse saw, washed out of a channel and trapped in shallow water after reproducing. Their time was limited, anyway. But what about their descendants?

Salmon embryos are initially buried under gravel so they don’t float away. “They’re very vulnerable at that stage,” said George Pess, a watershed program manager at the National Oceanic and Atmospheric Administration’s Northwest Fisheries Science Center. “Floods could set the trajectory for this brood year.” Fish in the alevin stage are still growing and cannot move for a month or so, and even once they emerge as fry, they’re only 35 millimeters — a little longer than a quarter coin. Females can lay from 1,000 to 7,000 eggs, but depending on how badly floodwaters churned up river bottoms, many of those eggs could have been unearthed from their hiding place, swept into the water column and ended up as tasty treats for a variety of predators.

“The key is whether the salmon were able to dig their nests deep enough not to be scoured,” said Thomas Quinn, a salmon researcher at the University of Washington. Egg nests, known as redds, could also be crushed by rocks and sand, or suffocated by silt as it settles. “In general, these floods are not good for them,” Quinn said. “I would expect the pink salmon will probably take a hit, and the chinook may take a hit from this.” But while he anticipates negative impacts, Quinn said, “I don’t think that they will be disastrous.” And species that have yet to spawn, like coho and chum, will probably be fine.

A smolt trap on a lower portion of the Nooksack, designed to capture young fish as they migrate out to sea in the spring, will give the Nooksack Tribe its first indication of a population decrease. Similar traps exist on other rivers throughout the Puget Sound watershed. Four years from now — when this cohort of salmon has matured in the ocean and returns to spawn — the tribe will know whether there’s been a decline.

George Swanaset Jr., the director of the tribe’s Natural and Cultural Resources Department, said tribal people have a duty to protect the salmon. Nooksack people, he said, have relied on salmon since the beginning of time. “We were fishermen. We lived with these fish,” Swanaset said. “Without salmon, we don’t exist anymore.”

Swanaset and his co-workers are concerned that the tribe’s habitat restoration projects, including engineered log jams that create pools where salmon can conserve energy and find cool water during the summer, might have been damaged by the flooding. They’ll have a better idea once the floodwaters recede and remote travel is safe.

It’s not all bad news: Salmon have adapted to deal with periodic flooding, and the reshaping of the landscape could even create new habitat. High flows are essential for maintaining the complex river systems salmon need, and floods are a normal and necessary part of the ecosystem. “While folks might be really concerned about these flood impacts, it’s important to remember that floods have occurred for millennia, and they do provide some benefits to salmon, despite what it might look like at present,” said Bridget Moran, a conservation associate with American Rivers who focuses on Puget Sound and the Columbia Basin.

To the south, atmospheric rivers have actually helped salmon get upstream during years of low flows and high temperatures by delivering essential water to watersheds. “We’ve seen a few different events come into the Pacific Coast, and it’s really been a godsend for California salmon,” said Nate Mantua, a fisheries and climate researcher with NOAA in Santa Cruz, California.

Unfortunately, human alterations to the landscape — damming rivers, draining floodplains for agriculture, constricting rivers to a single channel — have changed the way floods impact ecosystems and salmon, making floods more damaging than they would be naturally. And experts say climate change is accelerating the timeline for many of the challenges salmon face in the Northwest, from warmer waters to severe floods. Atmospheric rivers are predicted to grow longer, wider and wetter in a warming climate. It remains unclear how this will affect salmon resiliency. “We’re taking what they’ve more or less evolved for,” Quinn said. “And we’re pushing the envelope a bit.”

This story was originally published at High Country News on Dec. 2, 2021.

Kylie Mohr is an editorial intern for High Country News writing from Montana. Email her at kylie.mohr@hcn.org