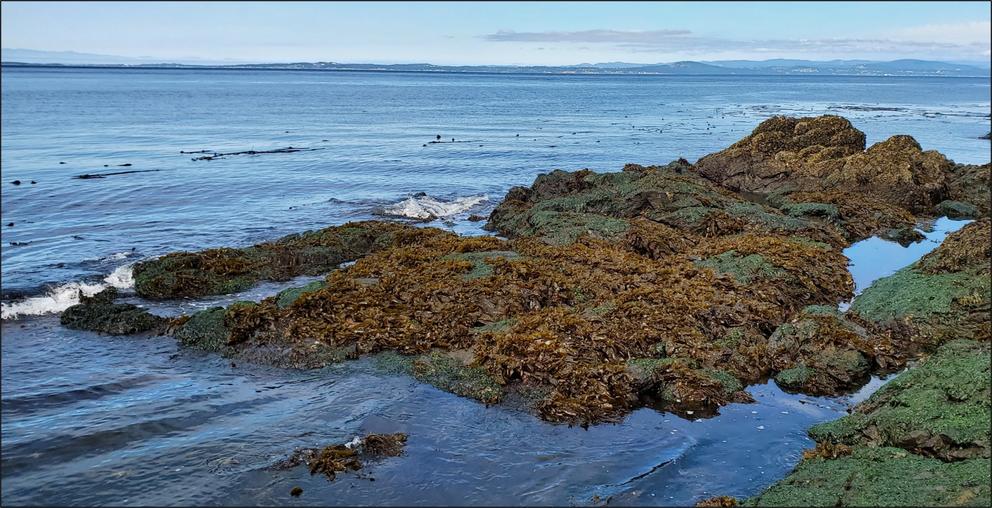 A kelp bed on San Juan Island photographed on the tenth day of the heat dome. (Courtesy of Robin Fales)

During the past summer’s stifling heat wave, Robin Fales patrolled the same sweep of shore on Washington’s San Juan Island every day at low tide. The stench of rotting sea life grew as temperatures edged toward triple digits — roughly 30 degrees above average — and Fales watched the beds of kelp that she studies wilt and fade. “They were bleaching more than I had ever seen,” recalled Fales, a Ph.D. candidate and marine ecologist at the University of Washington. She didn’t know whether they would make it.

Never in recorded history had the Pacific Northwest experienced anything like the “heat dome” that clamped down on the region in late June 2021. Temperatures reached a withering 116 degrees Fahrenheit in Portland and 121 degrees in Lytton, British Columbia — the highest ever recorded north of the 45th parallel.

Scientists said the event would have been “virtually impossible” without climate change. It killed hundreds of people, damaged roads and power lines, and devastated crops. It also caused widespread ecological fallout, the full extent of which scientists have yet to grasp.

Initial reports were sobering: A billion shellfish and other intertidal animals baked to death on the coast of British Columbia. The Portland Audubon Society declared a “hawkpocalypse,” as it tended to scores of sick and injured birds. And in eastern Oregon, state officials estimated that tens of thousands of sculpin, a bottom-dwelling fish, perished in streams already throttled by drought.

A kelp bed on San Juan Island photographed one month before the head dome, and again two, four and 10 days into the heat dome. (Courtesy of Robin Fales)

A kelp bed on San Juan Island photographed one month before the head dome, and again two, four and 10 days into the heat dome. (Courtesy of Robin Fales)

By fall, headlines and memories had faded, but the heat wave’s impacts linger on. In fact, researchers have learned that short bursts of high temperatures can pose a greater threat to plants and animals than long-term warming, and may even increase the risk of extinction.

In one recent study, researchers looked at 538 species from around the world, nearly half of which had already disappeared in at least one location. They found that the doomed populations endured greater (and faster) increases in maximum yearly temperature than others. Surprisingly, though, they often experienced smaller changes in average temperature, said John Wiens, an evolutionary ecologist at the University of Arizona and a co-author of the study. “The most important variable is these hottest summer temperatures.”

Extreme heat can kill organisms outright, especially if they are also exposed to intense sunlight. Dehydration sets in and organs fail as enzymes stop working and proteins sustain damage. The trauma can make survivors more susceptible to disease and predation, and reduce or delay reproduction. Hot weather can also cost animals by discouraging them from foraging or hunting. And these events are happening more often: By 2040, heat waves are projected to become 12 times as frequent as in a nonwarming world.

After the latest episode in the Pacific Northwest, researchers began tracking the damage to a variety of species and ecosystems, like coastal forests, which fared especially poorly. Scorched leaves turned hillsides sickly shades of orange, and trees already stressed by drought dropped their needles prematurely.

But the deadliest impacts may be invisible, said Christine Buhl, an entomologist at the Oregon Department of Forestry: Thirsty trees, for example, may have suffered damage to their roots and vascular systems, if they couldn’t pull enough moisture from the ground. “We will know in coming years how bad it was,” Buhl said.

Australia provides a grim preview. After a string of heat waves hit the western part of the country in 2010 and 2011, scientists documented widespread tree death, among other impacts, which later contributed to beetle outbreaks and wildfires, said Joe Fontaine, a fire ecologist at Murdoch University in Perth. Even now, he said, “you can still go around and find the legacy of that event.”

Yet heat waves may also help species adapt to long-term warming by driving rapid evolutionary changes, said Lauren Buckley, a climate change ecologist at the University of Washington. They can weed out unfit individuals, giving those that tolerate hotter temperatures an advantage. Scientists have seen evidence for such shifts in populations of Douglas fir and fruit flies. But “there’s sort of a sweet spot,” Buckley said, between a stress test and a massacre.

It’s too early to know whether the recent temperature spike hit the sweet spot for some — if any — Northwest species. On San Juan Island, however, Fales found a measure of hope. After the heat wave, Fales surveyed the damage to the kelp she studies and determined that while it had lost about half its biomass, most of the plants were still alive. Many mussels survived, too.

That may be because warm spring temperatures spurred them to mount defenses before the heat wave, Fales said, by producing heat-shock proteins, for example, that repair other damaged proteins. But there’s another possible factor: By celestial happenstance, summer low tides on the island always occur during midday, exposing intertidal organisms to peak temperatures and making it “a hotspot location,” Fales said. Perhaps the kelp and its neighbors had already begun to adapt.

This story was originally published at High Country News on Nov. 22, 2021.

Julia Rosen is an independent journalist covering science and the environment from Portland, Oregon.