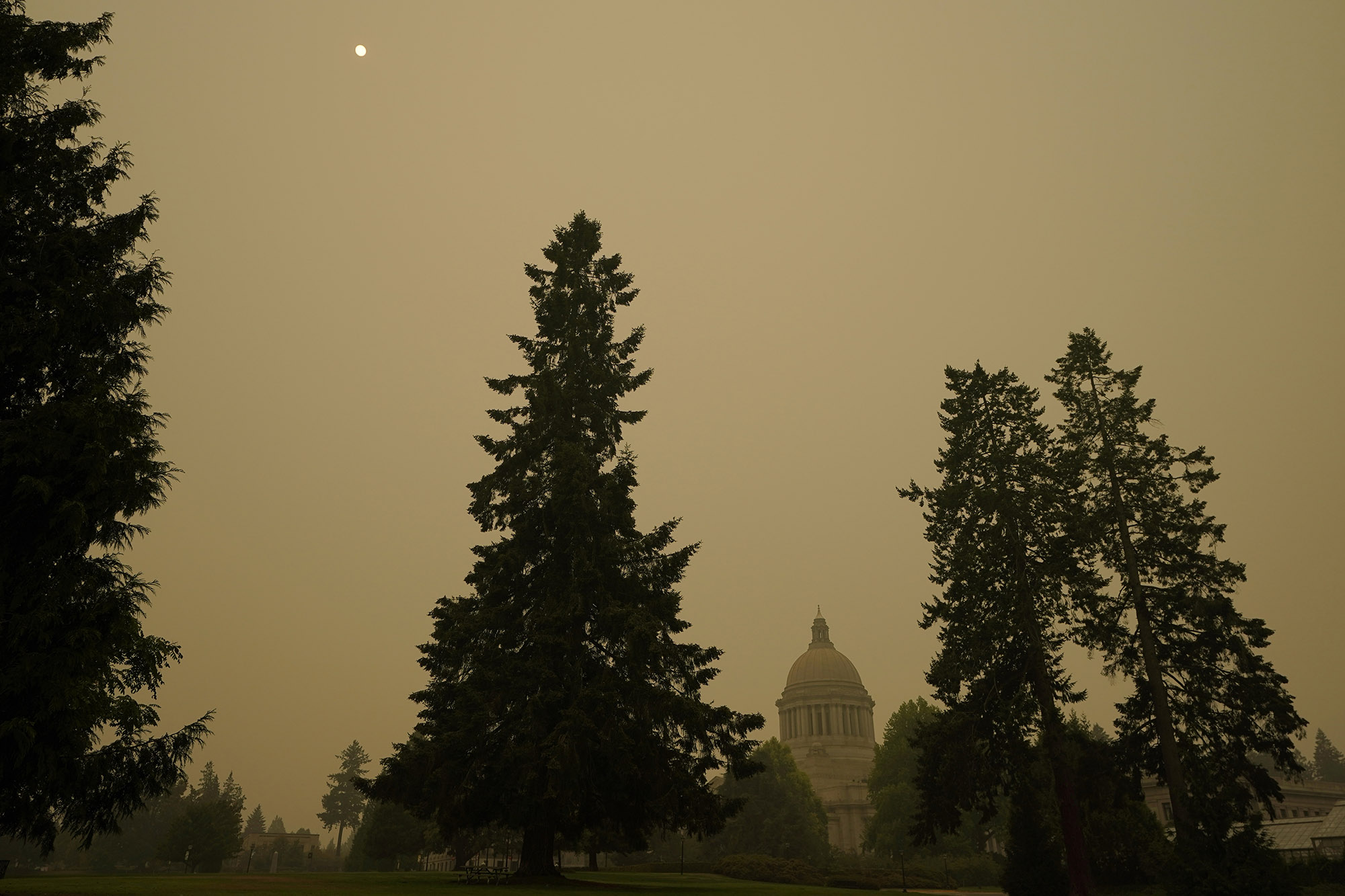 In this Sept. 12, 2020, file photo, smoke from wildfires in Oregon and California create hazy skies, as the sun is seen above the Washington state Capitol in Olympia. Wildfires churning out dense plumes of smoke as they scorch huge swaths of the U.S. West Coast have exposed millions of people to hazardous pollution levels, causing emergency room visits to spike and potentially thousands of deaths among the elderly and infirm, according to an Associated Press analysis of pollution data and interviews with physicians, health authorities and researchers. (Ted S. Warren/AP)

Less than a year after Washington state committed $328 million toward reducing the impacts of climate-charged catastrophic wildfire and improving forest health, the U.S. Forest Service announced a plan liable to supercharge that effort.

A U.S. Department of Agriculture announcement on Jan. 18 adds nearly $3 billion more to the nation's forest restoration efforts and fire reduction, especially on federal forest lands in the heart of Washington’s fire country and in 10 other Western states. Just as significant, the accompanying plan incorporates the newest science and reflects Indigenous stewardship practices. The money draws from the Infrastructure Investment and Jobs Act proposed by the Biden administration and passed by Congress, with potential for more funding from the Build Back Better bill, now stalled in the Senate.

“Previous plans recognized that we have a big forest health challenge. But now we have a [specific] plan … and the critical funding to complete the work,” she says.

In 2021, Washington state authorized spending $125 million every two years on forest management activities that reduce the amount of flammable material in forests, restore damaged landscapes, respond to wildfire and help communities adapt to the fire conditions of a warmer, drier world. The funding will run eight years for a total of $500 million.

Sources also say it comes not a moment too soon for a state in which more than half of the landscape is forested, and which has seen more than 7% of its acreage burn since 2015. Of the 3.1 million homes in Washington state, about 1 million are threatened by wildfire.

Between fire suppression and climate change, which has led to abnormally dry and drought conditions, wildfires in Washington state are burning more intensely over lengthening fire seasons.

Hilary Franz, the state commissioner of public lands, says federal lands are the most significantly challenged and in the worst condition in Washington state.

“Even if my agency … restored all the health of our state land and forests, and even significantly made progress on private lands, we would still see significant catastrophic fires in our state,” she tells Crosscut.

“It gives me great confidence that we're going to start to make significant progress on some of the challenges we've had with increasing catastrophic wildfires in Central Washington, as well as increased dying off of those forests,” Franz says.

The federal Wildfire Crisis Strategy and funding injects nearly $3 billion into wildfire mitigation, forest management and community preparedness in Western states over the next 10 years. The government’s plan for wildfire promises fire-reducing interventions on up to 50 million acres of federal, state, tribal and private land in areas most vulnerable to fire in the central and eastern parts of the state. The Forest Service is calling these areas ‘fireshed,’ and is preparing a long-term plan for management and adaptation.

Where the U.S. spent decades managing landscapes to eliminate fire and allowing damaging logging practices, the new plan adapts new research and Indigenous knowledge about how to steward resilient forests in ways that allow fire in smaller, more regular doses. Forest ecosystems self-regulate with fire. By not allowing fires to burn in forests where regularly occurring fires support forest ecosystem health, vegetation can build up and fuel catastrophic fires that outpace firefighting crews.

In the plan, the Forest Service will reduce the amount of flammable materials in forests through thinning and pruning groups of trees, as well as using controlled burns, which emulate those naturally occuring, smaller and less destructive fires and, in turn, reduce flammable materials in forests. Fire can return nutrients to forest soils, combat disease and insects, allow light to reach smaller plants and, of course, remove dry and dead plants that could wind up fueling fires.

“The implementation plan for the 10-year strategy has all the right ingredients,” Batura says.

The Forest Service identified a few key focus areas to achieve this: Using science to figure out where and how to reduce fuels and improve forest health, ramping up the firefighting and management workforce, centering equity and tribal co-management, building relationships with local agencies and communities, and improving these local groups’ ability to prepare their communities for fires and restore forests that have already burned.

“If we want to have stands of large, old ponderosa pine or western larch, or huckleberry fields, healthy and diverse wildlife habitats, and watershed integrity, then we need to emulate the processes that created the complex, fire-driven mosaics of the past. This plan promises to elevate the rate of work necessary to accomplish that goal,” says Mark Swanson, a fire ecology researcher and associate professor of silviculture and landscape ecology in the Washington State University School of the Environment.

Swanson appreciates that the Forest Service has multiple tools to choose from when figuring out how to make forests more fire resilient. Prescribed fires aren’t feasible in every forest, and pruning and thinning aren’t always appropriate options. 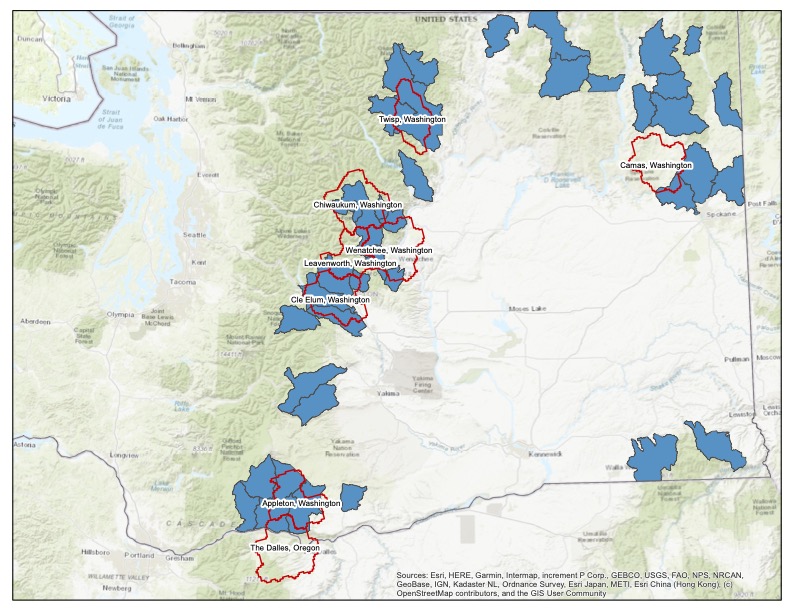 It’s encouraging to see an emphasis on helping communities adapt to fire, says Ryan Anderson of the Washington Fire Adapted Communities Learning Network, a Forest Service-sponsored organization that helps communities prepare for or recover from fire and invest in adaptation strategies. Anderson also appreciates the intent to invest in and prioritize equity in leadership and which communities receive help.

Including tribal nations in decisions and leadership, sources say, is crucial. Failure to do so has contributed toward fires that devastated nations like the Colville Tribes, which sued the federal government last year for damages incurred by fire in 2015 on forest lands the government holds in trust for tribes. Representatives of the Colville Tribes were not available for comment by publication time.

“We have on-the-ground proof that [this strategy] does work to help keep fires less severe, to return forests to a more historically resilient state,” says Will Rubin of the Department of Natural Resources.

Washington’s 20-year plan flagged 39 “priority areas”, including the Colville reservation, Gifford Pinchot and Okanogan-Wenatchee national forests, which are most in need of fire interventions. The state aims to intervene in 1.25 million acres of fire-prone landscapes by 2037. About half of those acres are on federal lands, which the state can co-manage through partnerships There are more than 400,000 acres of overlap between these priority areas and approximately 250,000 acres of fire sheds the Forest Service prioritized based on fire susceptibility and how damaging fire could be to lives or property. While DNR identified priority areas across the state, the Forest Service plan focuses on the Central and Eastern Washington areas it found most vulnerable.

The Forest Service, part of Department of Agriculture, is currently coordinating with regional partners in Washington and Oregon, including state agencies and tribes, to determine strategies to implement work over the next decade, says Stephen Baker, regional media officer of the USDA Forest Service Pacific Northwest region, via email.

But even a plan with funding faces hurdles.

There is a nationwide struggle to hire enough people to fight fires. While the new funding should help the Forest Service invest in a bette-paid and larger firefighting workforce, with the aim of making more than 1,000 seasonal firefighting positions permanent, firefighters can’t appear from thin air.

“We’ve been talking for years about the need to increase the workforce — including a trained prescribed fire workforce — to perform this critical work,” The Nature Conservancy’s Batura says. 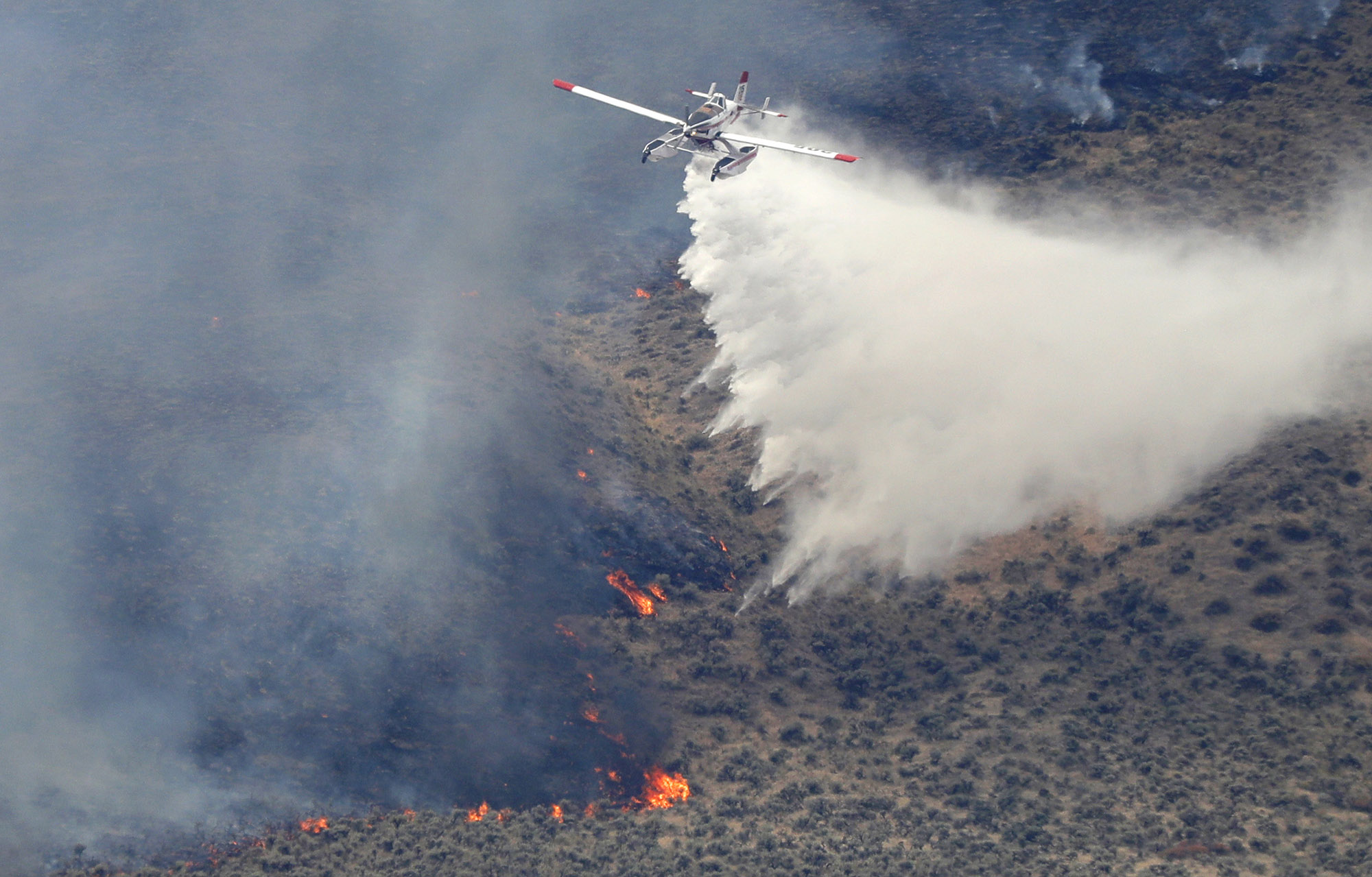 In this June 21, 2018, file photo, an airplane drops water on the Milepost 22 wildfire near Vantage, Kittitas County. An increasing number of forest fires are scorching portions of the state each year. (Ted S. Warren/AP)

In this June 21, 2018, file photo, an airplane drops water on the Milepost 22 wildfire near Vantage, Kittitas County. An increasing number of forest fires are scorching portions of the state each year. (Ted S. Warren/AP)

Anderson hazards that it’s not just firefighters overwhelmed by fire.

“It’s worth keeping in mind how hard [adaptation] is for communities,” he said.The burnout rate is starting to get pretty high. I would allow room for working with trauma impacted communities.”

And there’s still more funding needed to treat forests and gird communities against the worst impacts of fire.

Between 2014 and 2019, the state spent nearly $150 million on average annually on firefighting, with the record fire season of 2015 running $342 million in firefighting costs alone. In June 2021, The Nature Conservancy estimated the U.S. would need $5 billion to $6 billion at minimum per year to treat the highest-priority forests and prepare communities for fire over the next decade.

There are 2.8 million acres of forest just in central Eastern Washington that are already dead or dying, Franz says, and the amount of forest in decline increases every year as insects, disease and climate change compound forest health problems.

Details of the plan also still need to be fleshed out.

“We should have more of these specifics — like number of acres, priority focus areas, funding amounts, timing, etc — to share in the next few weeks,” the Forest Service’s Baker says.

But Washington is in a position to put available funding into action more quickly, sources suggest.

The early stage of the federal plan involves one to two years of engaging local leadership. Franz says the state and the U.S. forest health teams have been meeting in regularly since last year, and she says she has received positive feedback on these communications.

“We are well ahead of making the plan that they just adopted in the investments they're bringing with it a reality,” Franz said.

As of the end of October 2021, DNR and its partners have tracked treatments across 363,000 acres of state, federal, private and tribal lands, Rubin says, putting the state at nearly 30% of the way toward reaching its 1.25 million-acre treatment goal. 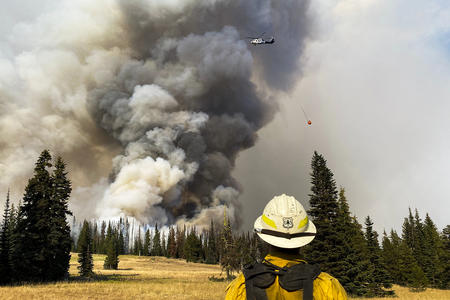 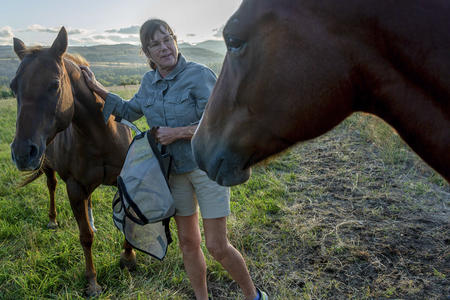 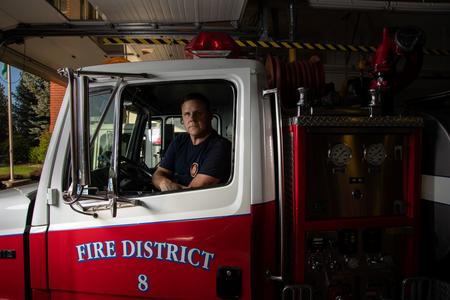 by / September 12
Article continues below