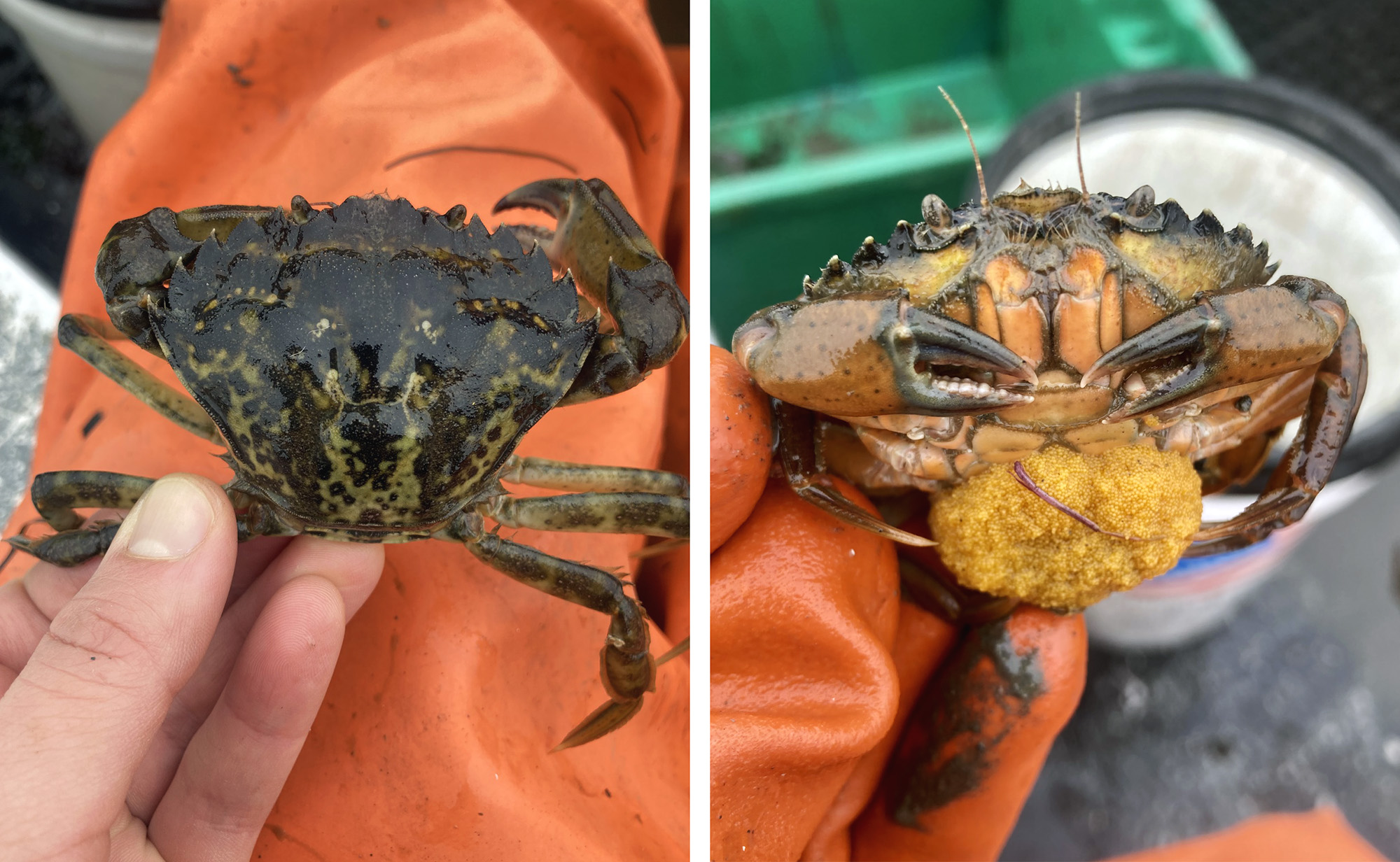 Biologist Bobbie Buzzell knew, intellectually, that the Lummi Nation had an invasive species problem on its hands last year.

But it wasn’t until she and her Lummi Natural Resources Department colleagues started making weekly trips to the landfill in September with a short-bed pickup truck fully loaded with 10,000 frozen green crabs trapped from the Lummi Sea Pond near Bellingham that she truly visualized the extent of the problem.

“It was a little overwhelming and daunting because that's a lot to pull out in a short amount of time. Especially given what had happened the year before,” Buzzell said. In 2020, they pulled about 2,500 of the fast-multiplying invaders out of the Lummi Sea Pond, one of the tribe’s most important seafood growing areas. The following year, they pulled out nearly 86,000, with 70,000 captured in September and October alone. The Lummi Indian Business Council declared a state of emergency in November 2021. “We couldn’t keep up with it,” Buzzell said.

But keeping up with invasions of this species is essential to protecting Washington waters and the native fish and shellfish living in them. And an important part of that is identifying European green crab populations before they have a chance to establish themselves in shoreline ecosystems, as they have in Massachusetts. The crabs and their larvae first landed on the East Coast in the 1800s in the ballasts of boats, and have since hitched rides along El Nino currents to the West Coast.

“Failure to act now and control existing green crab populations could have devastating impacts on shellfish production, and the livelihoods of shellfish farmers and harvesters in Washington’s rural coastal regions,” said Bobbi Hudson, executive director of the Pacific Shellfish Institute.

Gov. Jay Inslee declared a “state of emergency” for green crabs on Jan. 19, as people monitoring the invasion saw the crab populations grow and spread to more areas.

The crabs have been found along Washington shorelines — in Willapa Bay and Grays Harbor by 1998 — and have been  spreading slowly inland since 2016. “There’s not an infestation in Puget Sound and we want to keep it that way,” said Chase Gunnell, spokesperson for the Washington Department of Fish and Wildlife. 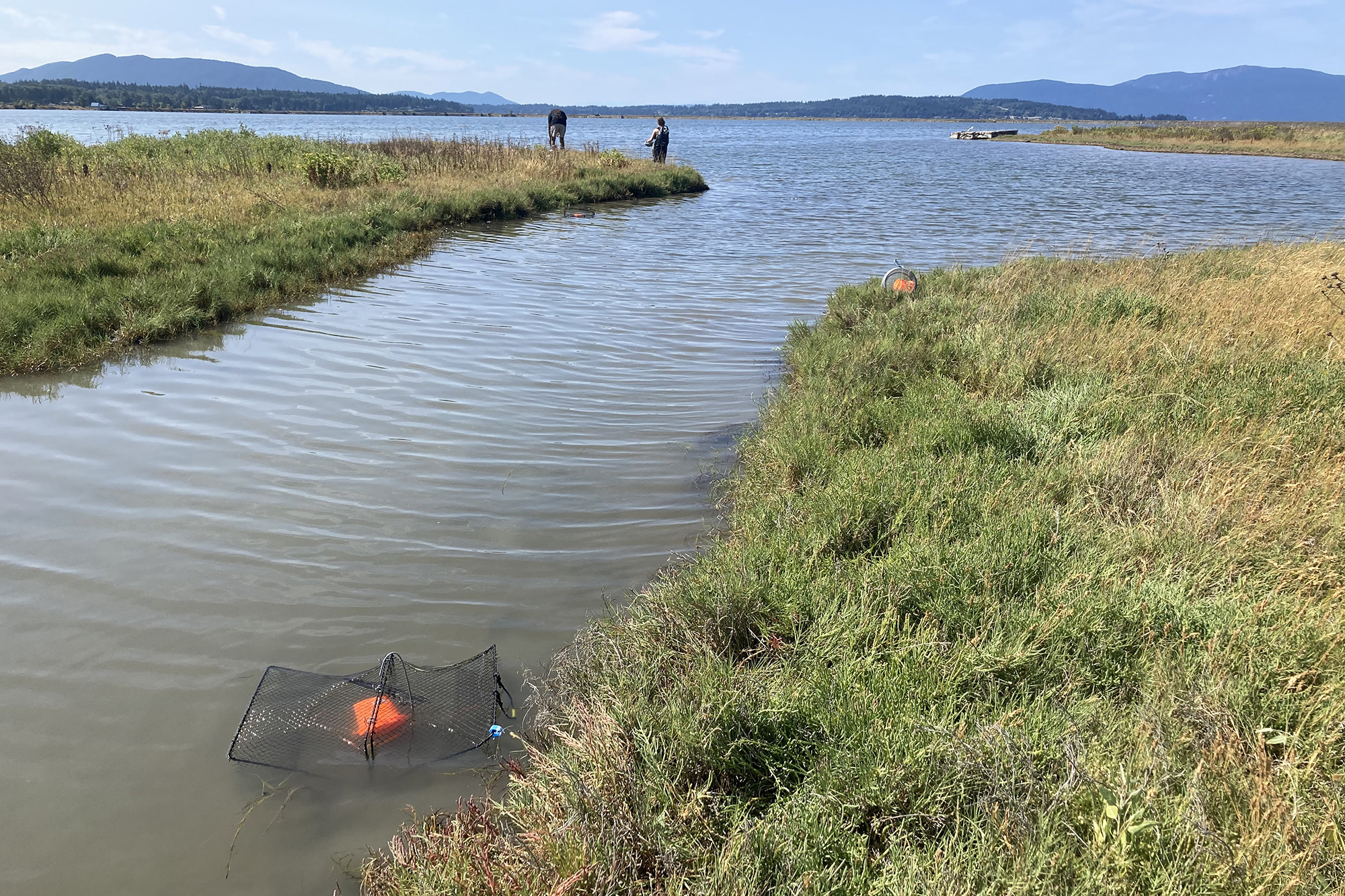 Wildlife managers and researchers are using tools like trapping to stay abreast of crab populations. These crabs are adaptable, but trapping in places they most like to inhabit — salt marshes, muddy tide flats, pocket estuaries, and other areas protected from predators like larger crabs — is time and labor intensive.

New research from the University of Washington is pointing wildlife managers toward a relatively new approach: using something called “environmental DNA” analysis, or eDNA, to detect the presence and population density of the crabs, even when they’re in smaller, less noticeable numbers. The research shows this analysis is about as likely as trapping to detect crabs, expanding possibilities for monitoring in the state.

The results build trust in a different way of seeing the world, said study co-author Ryan Kelly, an assistant professor in the School of Marine and Environmental Affairs. “And we can take that lesson and apply it to green crab, but also to the next invasive species, or endangered species,” Kelly said. “In my eyes, [our] paper is the best one out there showing how eDNA really works in a real-world management setting.”

Marine Ecologist Emily Grason of the Washington Sea Grant crab team said being able to detect crabs at low densities can offer the biggest bang for scientists’ buck in terms of responding to infestations before they become problems.

These crabs are small but mighty predators. Their reddish-to-green shells rarely grow larger than 4 inches across, but they inhale young oysters and clams, and even prey upon crabs equal in size or smaller. They have a history of eating native shore crabs in places like California and Oregon.

The green crab fundamentally changes ecosystem dynamics, outcompeting other predator species such as Dungeness crabs for food and shelter — something that’s a big concern for shellfish harvesters in Washington state.

In the process of overwhelming species on the East Coast, they’ve been documented to have damaged eelgrass beds that support lots of species, including juvenile salmon. “It's not just one species. It's the whole ecosystem that’s in jeopardy,” Buzzell said.

Researchers don’t need to see these successful predators to detect their presence. Thanks to eDNA, scientists can now sense that animals are present by sampling water, soil and more for the genetic traces that living things leave behind in the world around them — bits of skin, shells, hair, mucus, poop, urine and more. They can even use this information to estimate the number of animals present.

The paper’s lead author, Abigail Keller, collected water samples in crab habitats around the state over three months in 2020, and compared the eDNA analysis of those samples with trapping data from the same places. In the process, Keller and the team created a method that not only shows how trapping and eDNA analysis can be equally capable of detecting the presence and number of green crabs, but which also helps scientists better understand the relationship between how abundant an animal is and our ability to detect it.

The research also gives managers a reason to trust eDNA as a monitoring tool, and starts to guide them on how and where to use it to complement other monitoring. That could expand crab monitoring throughout Washington, boosting the chances of keeping green crab numbers low.

Neither eDNA nor trapping is 100% accurate. Kelly, the UW professor, compares using them to having two clocks that each tell you a different time and which you don’t yet have the means to know which is correct.

“We have these two ways of measuring the world and both of them are really imperfect. But by putting the two streams of data together, you get a much better idea of what's going on,” he said. Having more of these imperfect tools to use in comparable ways, Kelly said, the better the chance of arriving at some version of truth. 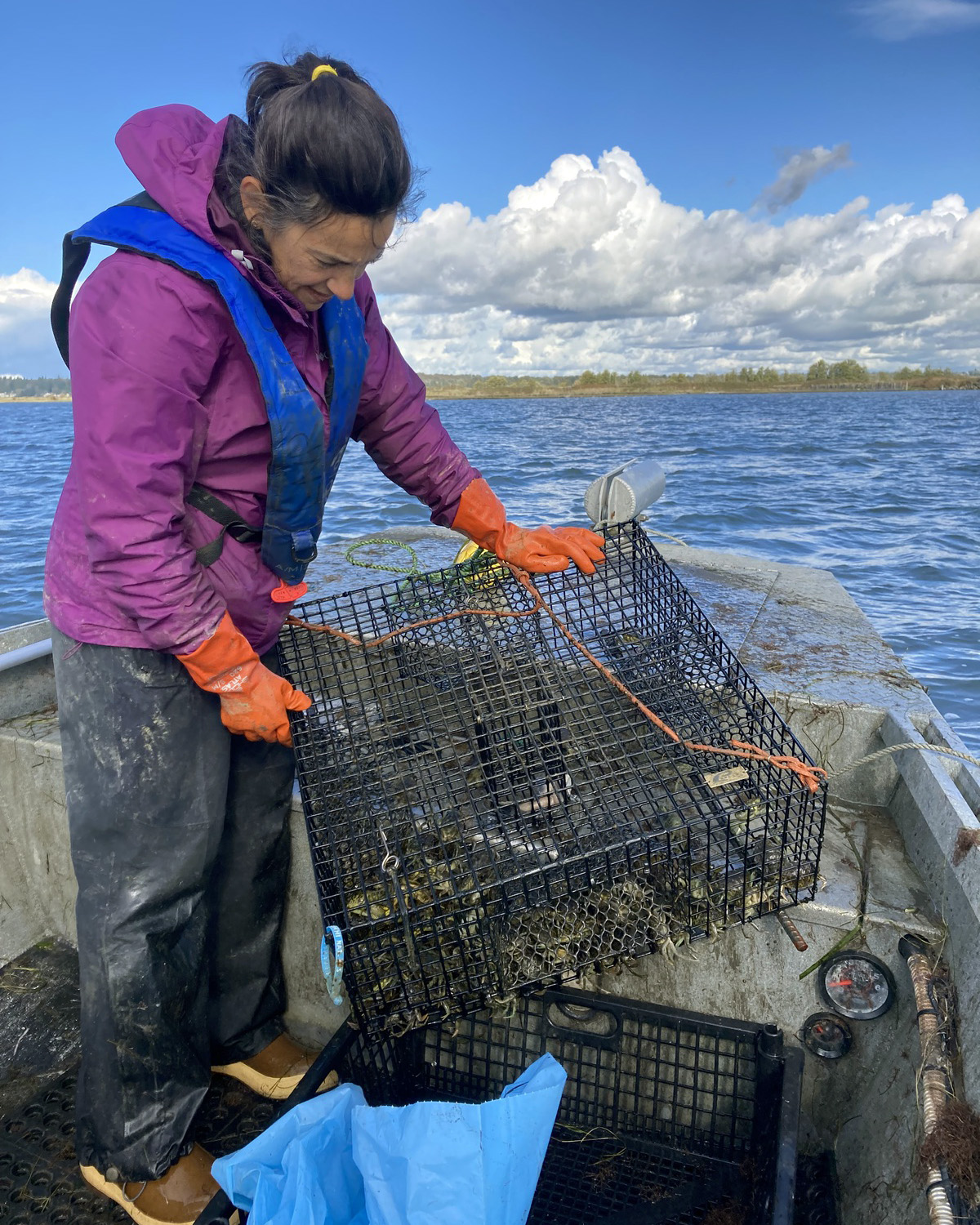 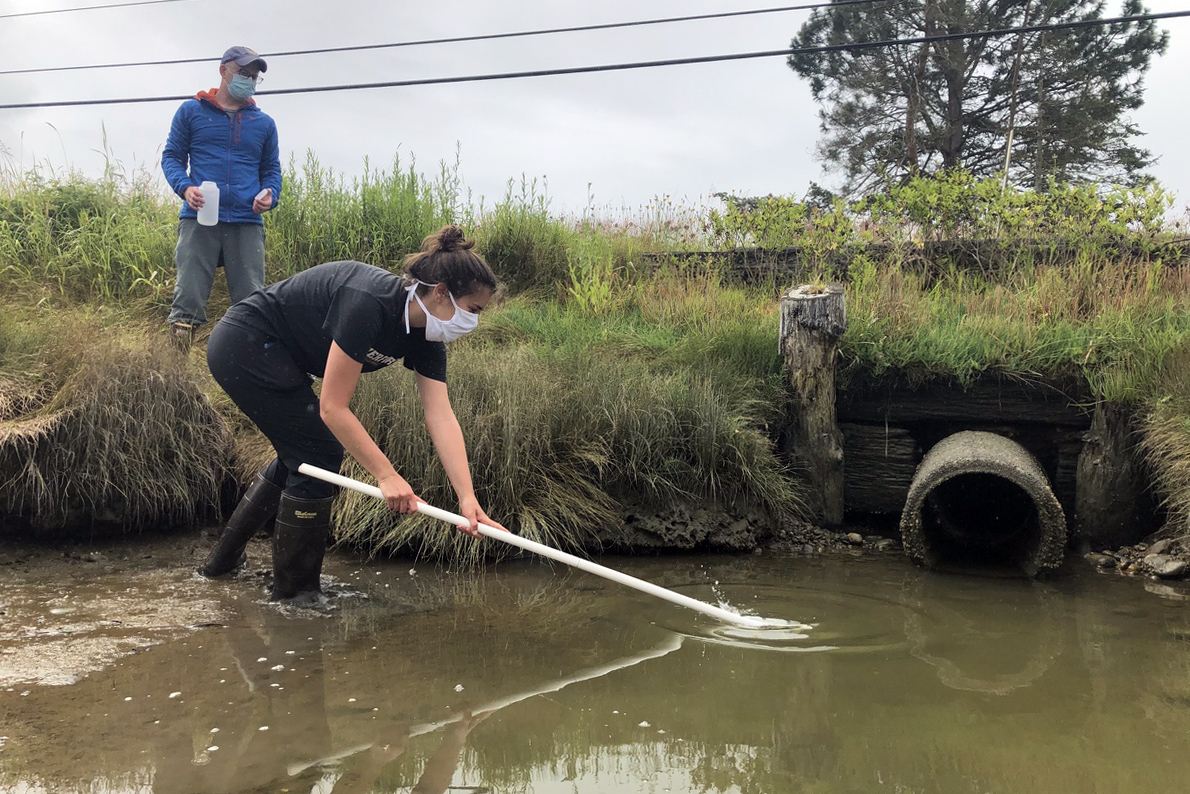 This data will help scientists figure out just how many water samples they need to collect or how many traps they need to set to pick up on different densities of potential crab populations.

The main takeaway of this research is that eDNA can help scientists and wildlife managers monitor more places than trapping allows, improving chances of detecting a problem that may be on the horizon.

While the Department of Fish and Wildlife’s Gunnell said managers are unlikely to ever rid state waters of green crabs entirely, people are still working to keep the crab numbers low enough that they don’t destabilize native ecosystems. 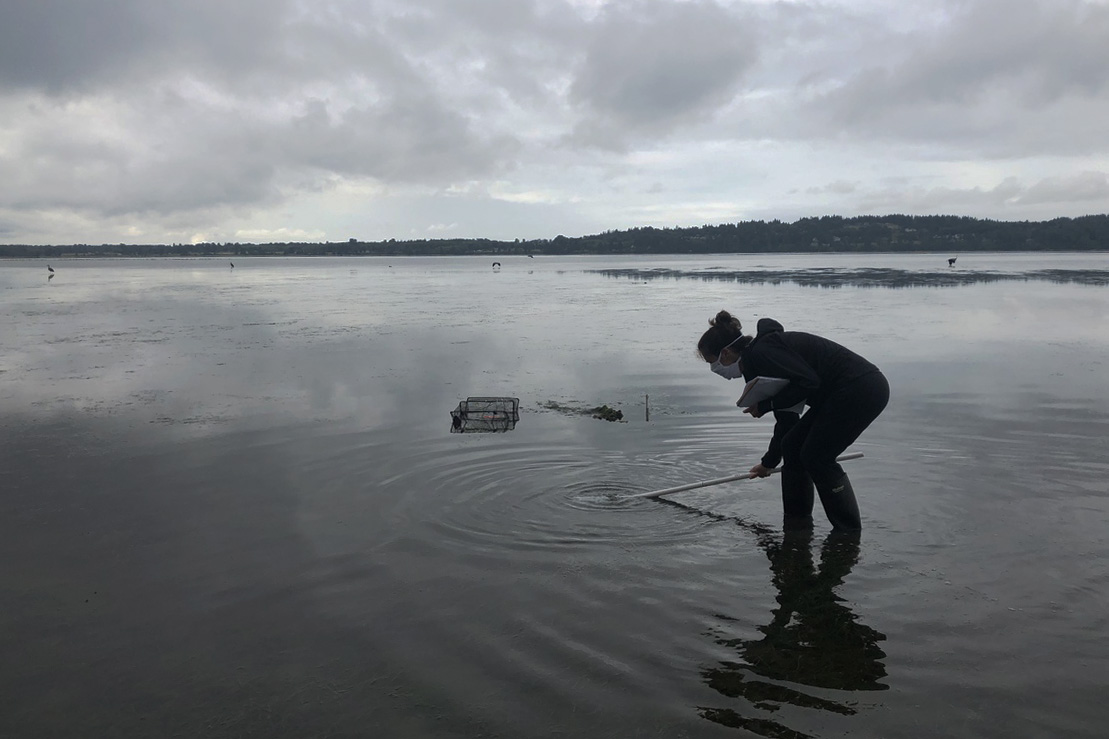 There’s proof of concept in the value of handling known crab populations, Gunnell said, noting population levels are decreasing with existing monitoring efforts like trapping at places like Drayton Harbor near Blaine, WA.

How quickly people need to be able to detect crab populations in order to prevent the crabs from wrecking ecosystems is still an open question, Washington Sea Grant’s Grason said, “because the landscape really influences how a given site will fare.”

“The only real answer we can offer at this point is that we want to find these populations as early as we can when they are as low as possible,” Grason said. 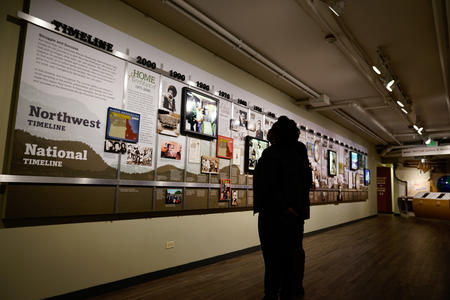 The Central District institution has a complicated backstory and an important role to play for Seattle's Black arts community.