WA wants to capture the natural gas leaking from landfills 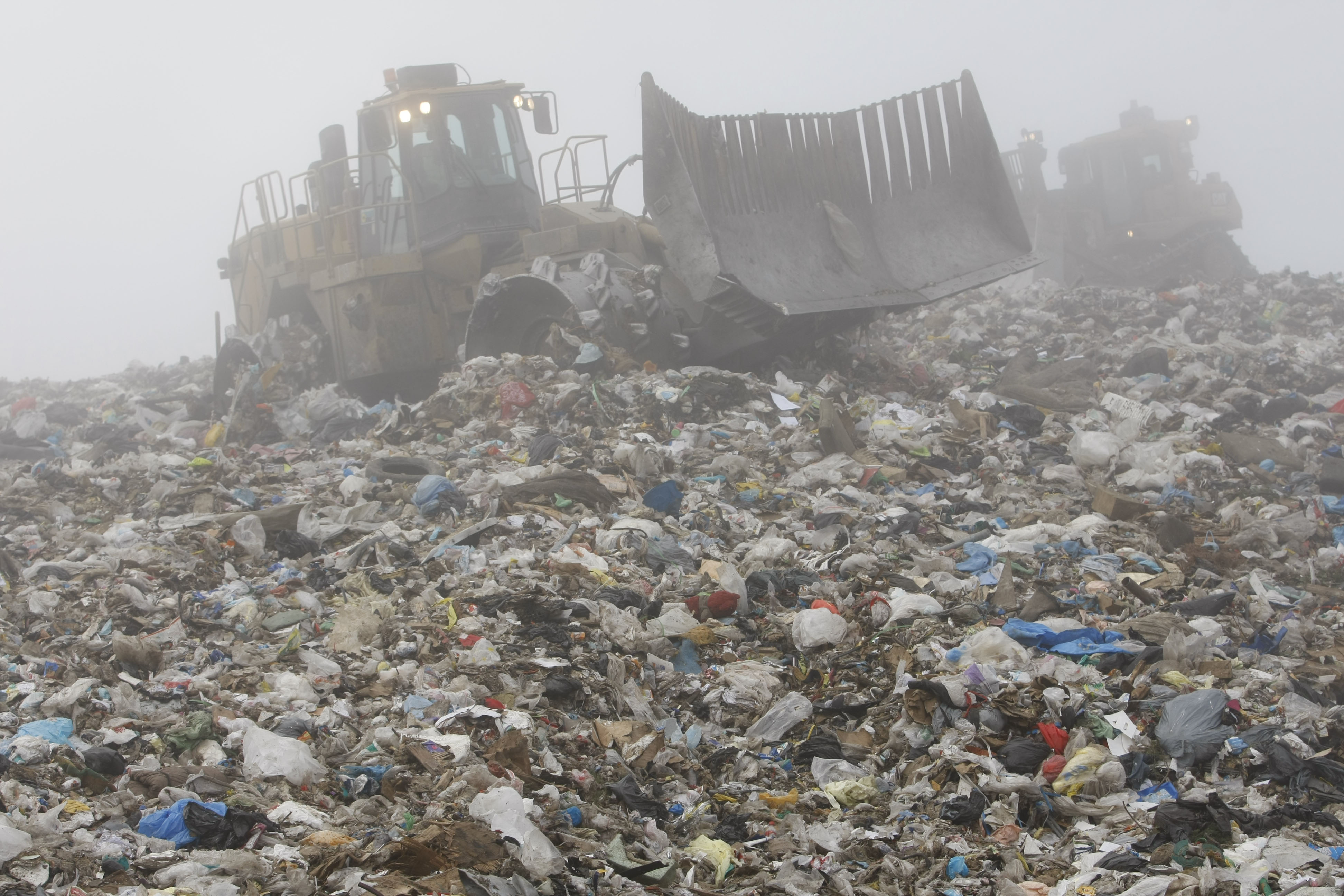 A tractor sorts garbage at the Altamont Landfill owned by Waste Management in Livermore, California, Friday, Dec. 18, 2009. Dotted throughout the facility are more than 100 wells with black tubes that vacuum up methane from the heap. (AP Photo/Marcio Jose Sanchez)

In the universe of global warming, carbon dioxide emissions tend to overshadow methane.

Although methane is shorter-lived in the atmosphere, it is a much more potent source of greenhouse gases that cause global warming.

“Methane stays in place for 10 years instead of 100 years, but it has 100 times the impact of carbon emissions,” state Rep. Davina Duerr, D-Bothell, said at a Jan. 10 hearing on her proposal, House Bill 1663, The bill, which has passed both houses of the Legislature, aims at regulating the capture of methane emissions from Washington landfills.

The anaerobic decomposition of organic wastes in landfills creates methane, which is lighter than air and rises out of the landfill unless capture systems are in place. “A landfill is going to contain gas. It’s like a sponge,” Trim said. When methane is captured, it can be used instead as fuel.

A capture system employs a vacuum inside the landfill to draw the rising gas back down through pipes to a storage location. There, the methane is processed into natural gas or burned off in a flare system. The U.S. Environmental Protection Agency estimates that current technology can capture 60% to 90% of a landfill’s methane emissions.

Methane accounted for 10% of the nation’s greenhouse gas emissions in 2019, according to the EPA. The agency’s figures show that landfills account for 17% of the nation’s emitted methane, behind fossil fuel production at 30%  and livestock-related emissions from manure, burps and farts at 27%. A 2021 Penn State University study concluded that the EPA might be underestimating the nation’s methane emissions.

Methane from Washington’s landfills are approximately 2.4% of the state’s greenhouse gas emissions — roughly equal to the yearly emissions from 320,000 cars — according to a 2021 Washington State Department of Ecology report.

The Washington House passed Duerr’s bill on Feb 11 and the Senate on March 4.

State Rep. Mary Dye, R-Pomeroy, and the GOP environmental issues leader in the House, argued it is a mistake to regulate methane in landfills before potential improvements in gas-capture technology are completed.

“This bill is going into an area that we have not thoroughly vetted on their impacts to the communities. … When you put a regulation in, you stop innovation at that moment,” she said in a Feb. 11 floor debate.

Duerr’s bill would require the owner or operator of an active covered landfill with 450,000 tons or more of waste in place to estimate the quantity of gas generated by the landfill. The same requirements would apply to closed landfills holding at least 750,000 tons of waste. Washington has 24 landfills that store more than 450,000 tons, according to the Ecology Department. And it has at least a couple dozen — mostly closed —  that store less than 450,000 tons.

If a landfill’s emissions estimates exceed 3 million British thermal units per hour, the operator would have to install and operate a gas collection and control system. A collection system would also be required if methane emissions reach 500 parts per million. The bill does not apply to landfills that handle solely hazardous wastes or only inert waste or nondecomposable wastes — such as dirt, concrete, rocks and bricks. 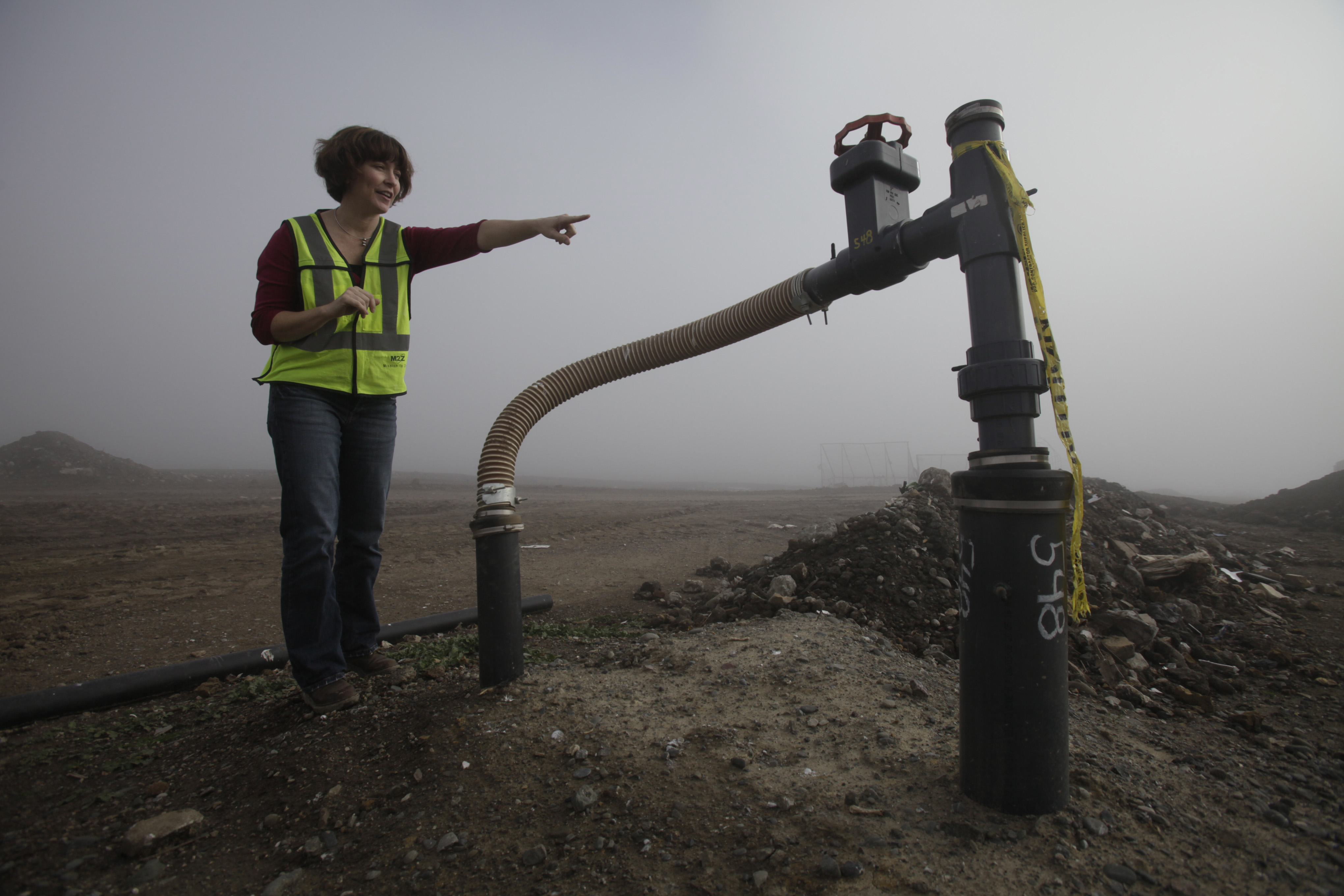 Landfill manager Jessica Jones points to a pump which brings up methane gas created by garbage at the Altamont Landfill owned by Waste Management in Livermore, California, Dec. 18, 2009. At the Altamont landfill there are more than 100 wells that vacuum up methane to be converted to liquid natural gas. (Marcio Jose Sanchez/AP)

Landfill manager Jessica Jones points to a pump which brings up methane gas created by garbage at the Altamont Landfill owned by Waste Management in Livermore, California, Dec. 18, 2009. At the Altamont landfill there are more than 100 wells that vacuum up methane to be converted to liquid natural gas. (Marcio Jose Sanchez/AP)

The United States has at least 2,600 municipal solid waste landfills. In a September 2021 tally, the EPA found 497 were collecting landfill emissions, and another 487 could cost-effectively collect methane, so a total of nearly 900 landfills could participate. About 70% of the collected methane is being used to generate electricity, and 17% is being used to offset the direct use of natural gas and oil. The remaining 13% is used to create renewable natural gas for other purposes, such as liquefied natural gas, heating or compressed natural gas .

King County and the Port of Seattle are taking their own look at using the county’s landfill near Maple Valley to produce electric power or biofuel. That study is not expected to be finished until 2023.

The port wants to explore the production of biofuels to provide to jet airliners using the Seattle-Tacoma International Airport, which the port owns and operates. It does not have a timetable on how fast it expects to ramp up the use of biofuels to blend with regular petroleum-based fuel, concentrating instead on getting such an effort started.

Meanwhile, the county government is looking at expanding its one landfill, which is expected to be full by 2028. One avenue to justify that expansion while trimming the amount of trash deposited there is to build a plant that would burn much of the garbage to create raw materials for biofuel refineries or to generate electrical power, Port Commission President Fred Felleman and former King County Councilmember Kathy Lambert said in separate interviews last year.

The study with the port must address whether a raw-materials-for-biofuels or electric-power facility should be built, both said. Numerous other questions they want addressed include costs, materials found in the landfill, how raw landfill material has changed over the years, future demands for electricity and what technologies to consider.

Meanwhile, a second House bill, which has also passed both houses of the Legislature, would also address methane emissions in landfills.

The bill, sponsored by state Rep. Joe Fitzgibbon, D-Seattle, chairman of the House Energy & Environment Committee, calls for a 75% reduction from 2015 levels of organic materials sent to landfills by 2030. Organic material — manure, yard wastes, food wastes, wood and garden wastes — contribute to the production of methane.

The bill would not apply to cities and counties with fewer than 25,000 people or those that produce less than 5,000 tons of wastes annually. Also exempted would be rural areas with a population density of fewer than 75 people per square mile.

At a more granular level in areas subject to the requirements, the bill would require a business generating at least 8 cubic yards of organic waste annually to have an organic materials management plan by Jan. 1, 2024. This regulation would require businesses generating 4 cubic yards of such waste to have plans by Jan. 1, 2025. The state Ecology Department would review the situation in 2026 to see if the rules need tweaking.