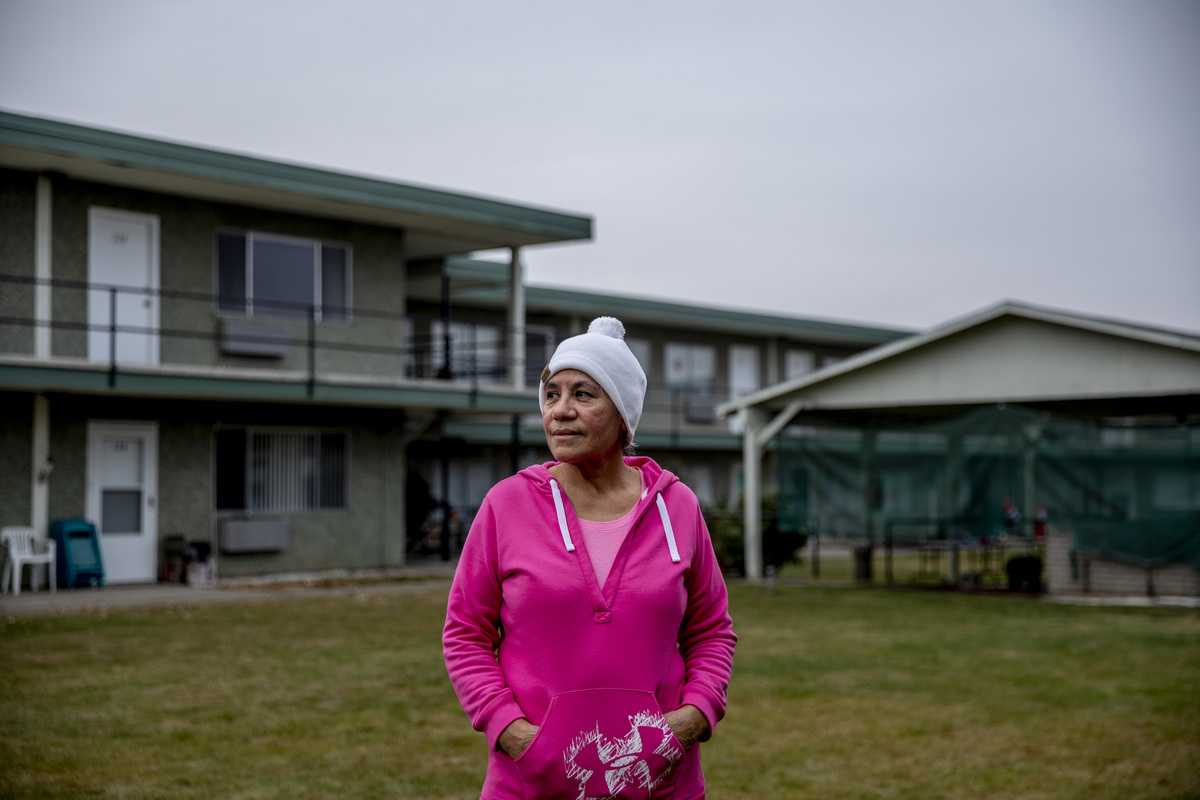 Paula Zambrano, a longtime farm worker in Yakima, has faced many instances of sexual harassment on the job and helped create a curriculum called “Basta!,” named after a poem she wrote about sexual harassment towards farmworkers. (Dorothy Edwards/Crosscut)

Paula Zambrano started working at a Yakima Valley farm just four days after she came from Mexico with her husband, whose family lived in the region. She had never worked in agriculture and didn’t know much about the industry, only how to differentiate apples by their color. But she was ready to plunge in.

Zambrano didn’t know what to expect on her first day, but what she did see shocked her. Sexual harassment from supervisors and foremen started from day one. They would lick their lips at Zambrano, utter sexual sounds and post pornographic photos around the workplace. She started hearing of other farmworkers having their genitals and breasts grabbed, and receiving threats and sexual propositions.

One night, she and a few other women who worked at the farm accepted a ride to work from a male supervisor at the start of a night shift. During the ride, he made comments about their genitals, Zambrano recalls now. The comment was off-putting, but nothing new to the women.

Then, the threats got real. He told them he was going to chase them into the field and “give you what you deserve.” He didn’t follow through on the threat, but the women never accepted a ride again. Zambrano says he disappeared for a while, but has since been hired back.

These were regular parts of her 22 years of agricultural work, Zambrano says, but it didn’t stop there. Rapes and sexual assault, although less common, also occurred in these isolated environments. Women confided in Zambrano as someone they could trust, telling her of their experiences with harassment. Workers were afraid of retaliation — loss of jobs, more harassment, deportation — if they reported the incidents.

“There’s a lot of boys, a lot of young girls, who are raped, mistreated, beaten,” Zambrano says. “It seems like [supervisors] just don’t pay attention to sexual harassment. We have to start getting rid of it because it hurts us.”

She claims that some of those who did report were ignored, or that the harassers were laid off for a few days, then sent back to work.

A yearlong investigation by the Center for Investigative Reporting that included the Yakima Valley found that supervisors often remained on the job for years after accusations. In 41 federal sexual harassment lawsuits against agricultural companies, almost 85% of the workers reporting the harassment faced retaliation.

“That fear of speaking up is what puts up a barrier, because we are afraid that we might be beaten or threatened,” Zambrano says.

She eventually joined Amigas Unidas, a nonprofit that assists women facing domestic violence and sexual harassment. It was situated in the offices of the Spanish-language Yakima radio station KDNA. The organization brought advocates from California to educate and train the women in ways to prevent violence in the workplace. Attorney Laura Contreras of Columbia Legal Services helped the women navigate the justice system. Money eventually ran out, Zambrano says, but a tight-knit group of six or seven women continued to volunteer their time to keep the organization going.

One day, a young woman at Zambrano's work approached her: A driver had attempted to grope her. Zambrano recalls reporting the incident to the floor supervisor of the warehouse with the young woman, but no action was taken. They then approached human resources: nothing. They went to the head supervisor: again, no action.

Eventually, Zambrano says the young woman got a restraining order against the driver. He was put on temporary leave for a few days, but then returned to work. The woman left the job, afraid of working around him, Zambrano says.

“At some jobs, all we are are numbers. We’re not people,” Zambrano says. “They don’t care about us … so we have to make changes, change the system.”

She wanted to direct her frustration and anger into that change. She started by writing a poem called “Basta! Basta! Basta!” (“Enough! Enough! Enough!”). In it, she maintains that farmworkers just want to put in a hard day’s work without living in fear of being sexually harassed.

“We just want to work.… We deserve respect and we also deserve equality,” she wrote. “Sometimes I want to quit but I have a family that I have to feed … I'm tired of crying.”

Her poem caught the eye of Dr. Vicky Vásquez, a professor in the School of Public Health at the University of Washington Bothell. Vazquez approached Zambrano about participating in creating a curriculum to train growers and supervisors in addressing sexual harassment of farmworkers.

Vásquez was joined by fellow professor Dr. Jody Early, and the duo worked for six years to develop the comprehensive curriculum, including input from more than 70 Washington farmworkers, as well as growers, policymakers and legal experts. They named their work Basta!, after Zambrano’s poem.

The toolkit, which will be released in its entirety this month, includes a 15-minute video accompanied by guided discussion questions, wallet cards on farmworker rights and resources — a Spanish radionovela available through the UW that is geared toward workers in how to report and flyers for owners or farm managers. The materials are available in Spanish and English.

The program was developed through the Pacific Northwest Agricultural Safety and Health Center, with the help of several UW Bothell students.

The project began six years ago, when Vásquez wrote a grant to fund a yearlong project that involved talking with 20 women farmworkers in the Yakima Valley about their experiences with sexual harassment. She knew the issue was a problem, she says, but she had no idea how prevalent.

“The stories that came through those very difficult meetings with them were very jarring for me,” she says. “Hearing a lot of detail that would go on and on. They went three, four hours.”

In 2016, she published a study resulting from her interviews with the women. It provided shocking insight into the agricultural industry: 75% of participants were either sexually harassed themselves or knew someone who had been. Previously, only two studies nationally had ever looked at sexual harassment against women farmworkers.

“Even though sexual harassment is illegal across the United States, it hasn’t been consistently enforced … within the agricultural sector,” Early says.

There are a number of reasons for this, she says. Farmers have a lot of policies to keep in mind and tacking on another training adds to their already full plate. Even when farmers did seek out training, there weren’t a lot of resources before Basta!

Early says Basta! hopes to have sexual harassment regulated as a workplace safety issue by the Occupational Safety and Health Administration, instead of just being part of existing voluntary trainings like those held by the Washington Growers League.

“We’re trying to change that. We know that research shows [sexual harassment] impacts the individual physically and mentally, and it impacts the entire organization,” Early says.

Our industry has been waiting a while for a tool like this.”
— Mike Gempler

The growers league was one of the project's early partners. Executive Director Mike Gempler says the league has provided basic sexual harassment training for its members, but nothing as comprehensive and robust as Basta!

Washington growers are eager for this type of training, he says, especially one that’s so regionally specific, provides input from local farmworkers and is bilingual.

A lot of growers don’t have experience in making presentations and leading discussions, he says, especially in topics like sexual harassment. Having a video, scenarios and a guided curriculum takes a lot of the pressure off. Gempler says this is a long time coming for growers and farmers.

“We’re really, really happy that this is done,” Gempler says. “Our industry has been waiting a while for a tool like this.”

It’s desperately needed, according to the Northwest Justice Project. The group highlighted the issue in its 2018 report, which said that four out of five women farmworkers in Washington experience sexual harassment or assault on the job. It provided legal representation in three cases of sexual harassment of farmworkers that resulted in successful lawsuits. Those cases led to implementation of new complaint procedures and compensation for victims.

One of those cases was brought by a woman named Heidi Corona, a tractor driver at Stemilt Growers in Wenatchee. She was physically trapped in her vehicle in a remote field while a supervisor made "graphic sexual propositions" and attempted to kiss her. She claims she was reassigned to lower paid work after she refused to return to work with that supervisor.

Another involved Maria Miranda-Gonzalez, who worked at DeRuyter Brothers Dairy in the Yakima Valley. She claims to have experienced verbal sexual harassment, groping and stalking. She reported her alleged assaulter. He was reassigned but, according to the complaint, continued to harass Miranda-Gonzalez until finally she was fired.

In a third case, five female farmworkers working in an onion packing shed at Horning Brothers in Quincy claim they were repeatedly groped by their supervisor. They endured the harassment over several years, they say, not reporting for fear of retaliation. Eventually, after one of the women attended a presentation on farmworker rights, she went to the Northwest Justice Project for legal representation. Ten women finally came forward.

One of the justice project’s farmworker unit lawyers, Blanca Rodriguez, worked on all three of the cases. She says the organization handles about 20 sexual harassment cases a year involving farmworkers.

At most, one will go to trial each year, she says, and when they do, the cases can take between one and three years to resolve.

“Unfortunately, it is still very prevalent … the stories break your heart,” Rodriguez says. “There’s still a lot of fear of retaliation, losing their jobs and embarrassment, not wanting your family or husband to know.”

Mayra Rivera, a health studies major who helped with Basta! and whose parents are both Mexican farmworkers in the Yakima Valley, says farmworkers don’t necessarily see it as harassment, so reporting can’t happen until there's a culture shift.

“I would say their privacy [is a huge barrier] because a lot of these families come from conservative backgrounds. Not everybody feels comfortable going to any random person and talking freely about any issue that they're having in their work,” she says.

Zambrano says she was initially hesitant to share her story, but it was too important to her to keep quiet.

“No more, not even one more,” she continues. “Not in sexual harassment, not in rape, not in this treatment: nothing. I will continue to fight because I can’t just do nothing. There’s such a great need.”