Rural tribes finally have a shot at faster internet

This federal window for Native communities to apply for better internet access could transform life for those in Washington. 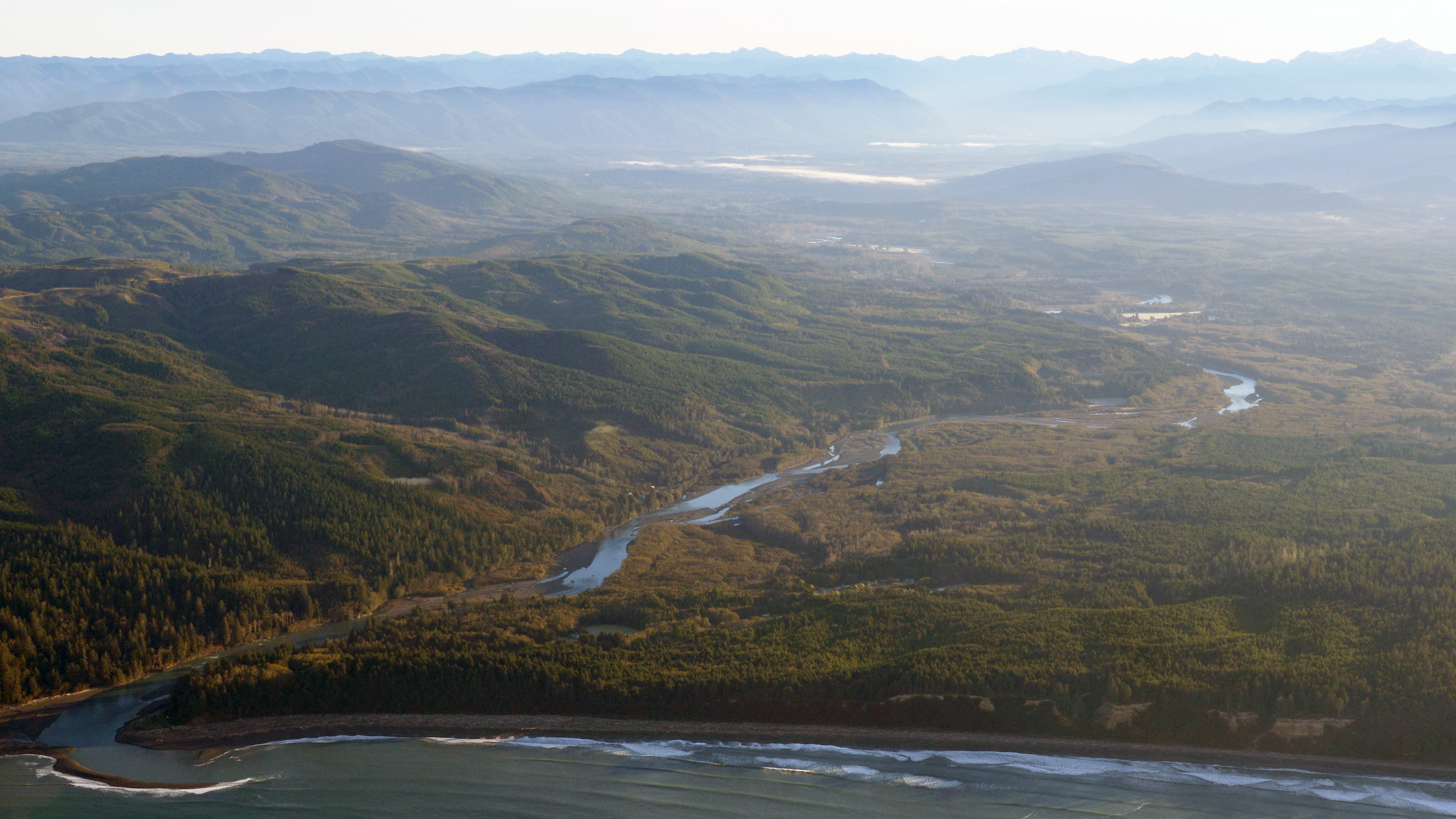 An aerial view of the Hoh reservation on the Olympic Peninsula. Like the Hoh Indian Tribe, rural tribes across the country have a chance to apply for unassigned spectrum between Feb. 3 and Aug. 3. Enrrique Barragan, a council member with the Hoh Indian Tribe, says that the tribe hopes to gain access to spectrum over their reservation and offer better internet access for tribal citizens. (Sarah Hoffman/Crosscut)

Some days, members of the Hoh Indian Tribe’s administration wait until children on the reservation leave for school before they boot up their computers and get to work.

Tribal Councilmember Enrrique Barragan says that’s often necessary. When children share the tribe’s web access — before and after school — internet speed on the reservation becomes sluggish, making it difficult for the administration to run. Some even wait to send emails or download important documents until the system is less overloaded.

“Everyone is kind of slowed down,” Barragan says. And for students, the slowdown hampers their ability to study and do homework: “A lot of it is online and that impacts them.”

A year ago, Barragan officially received the task of figuring out how the tribe could better access the internet. He wasn’t an expert — he knew how to turn a router on and off, and that was enough.

“It’s been a huge learning curve,” he says. “They send me to a lot of little workshops, but it’s mostly self-taught.”

But it was necessary learning. Improved access was long overdue: As is the case for many rural tribes, people living on the Hoh reservation have long dealt with particularly slow internet. Lacking internet access negatively impacts not only the operation of tribal administration, but also emergency preparedness, the ability of Native students to do school work online and even access to job opportunities.

And like many other seaside tribes on the Olympic Peninsula, the Hoh Indian Tribe is also in the process of relocating homes on the reservation to higher ground, as many are currently situated in a flood zone. As the tribe readies itself for the move and expansions alongside it, Barragan says residents need reliable internet now more than ever. Without it, Barragan says, it’s harder for the tribe to be independent.

“If we’re planning on growing ourselves, we need better internet for that,” he says.

For small tribes without a team of internet experts and money to back large projects, improving access can be both difficult and expensive. So when Barragan heard of the Federal Communication Commission’s (FCC) tribal priority window for unassigned 2.5GHz spectrum over tribal lands, he realized the tribe had a unique opportunity for change.

The priority window was created, in part, because of the FCC’s “Bridging the Digital Divide” initiative, which seeks to expand high-speed internet access — also known as broadband — to communities where it’s lacking or nonexistent. These communities are often in rural areas, and the FCC’s website says barely 60% of people have access on tribal lands.

The window opened Feb. 3 and closes Aug. 3. While any federally recognized tribe or Alaska Native village with a population of fewer than 50,000 can apply for free, they must also have plans in place that would enable them to provide high-speed internet coverage to 80% of their population five years after the license is granted.

That educational set-aside was made before the development of the internet. MuralNet Chief Executive Officer Mariel Triggs, who works with tribes to build broadband internet infrastructure on reservations, says the frequency is perfect for accessing the internet now, especially in rural areas. It’s particularly good for wireless broadband services and is relatively low frequency, which means that infrastructure costs are lower. The frequency is also good for carrying signals through densely wooded areas, which tends to match the environment of many rural tribes in Washington.

“It’s a Goldilocks balance of distance traveled and what it can carry — it can go pretty far and sustain many households,” Triggs says.

Even before the tribal internet window opened, the FCC and organizations like MuralNet have worked to inform tribes across the country of the opportunity. Triggs says it’s a joint effort with the FCC that makes this outreach possible, especially for tribes with fewer resources. Once the window closes, applications for the spectrum will be open to the public, so she says it’s important that tribes know about the opportunity as soon as possible.

“A lot of the workshops that have been done by the FCC [are] at national conventions or regional conventions,” Triggs says. “That’s wonderful, but if I’m in Bristol Bay, Alaska, going to Washington, D.C., is actually quite expensive and quite a lot of time.”

For the Makah Tribe on the peninsula, the work boosting access to the internet began in 2014. Crystal Hottowe, a grant writer with the Makah Tribe, supervised the construction of a wireless network for Makah tribal businesses and schools. Before that, she says the lack of internet access forced the tribe to send students to take statewide tests at a school off the reservation. That school, which had a broadband link, was a 40-minute ride away.

Better internet may also mean better emergency preparedness for tribes. Damon Day, chief information officer of the Confederated Tribes of the Colville Reservation in north-central Washington, says internet access is severely lacking among households on the reservation. This was particularly problematic during the summer wildfires that have plagued the tribe in recent years.

“I’ve talked to firefighters who say they could yell at each other and hear better than radios work because of the trees surrounding them,” Day says. “With this signal, it can get through the vegetation — it’ll be better access to the areas they’re fighting in.”

Day says that regardless of a tribe’s plan for the spectrum, applying should be a given.

“It’s sovereignty,” Day says. “For us to have control over the spectrum would be huge. Airwaves over reservations are a resource that tribes should own.”

Barragan agrees. Although he’s still familiarizing himself with spectrum and what building an infrastructure for his tribe would look like, he sees opportunities like these as a chance to push the tribe forward while it continues to grow.

“We’re a sovereign nation,” he says. “We want to be able to provide a basic standard for our community.”