Undocumented workers fend for themselves with little COVID-19 help

Cities, nonprofits help with rent and small business loans, but the need in WA is greater than available cash. 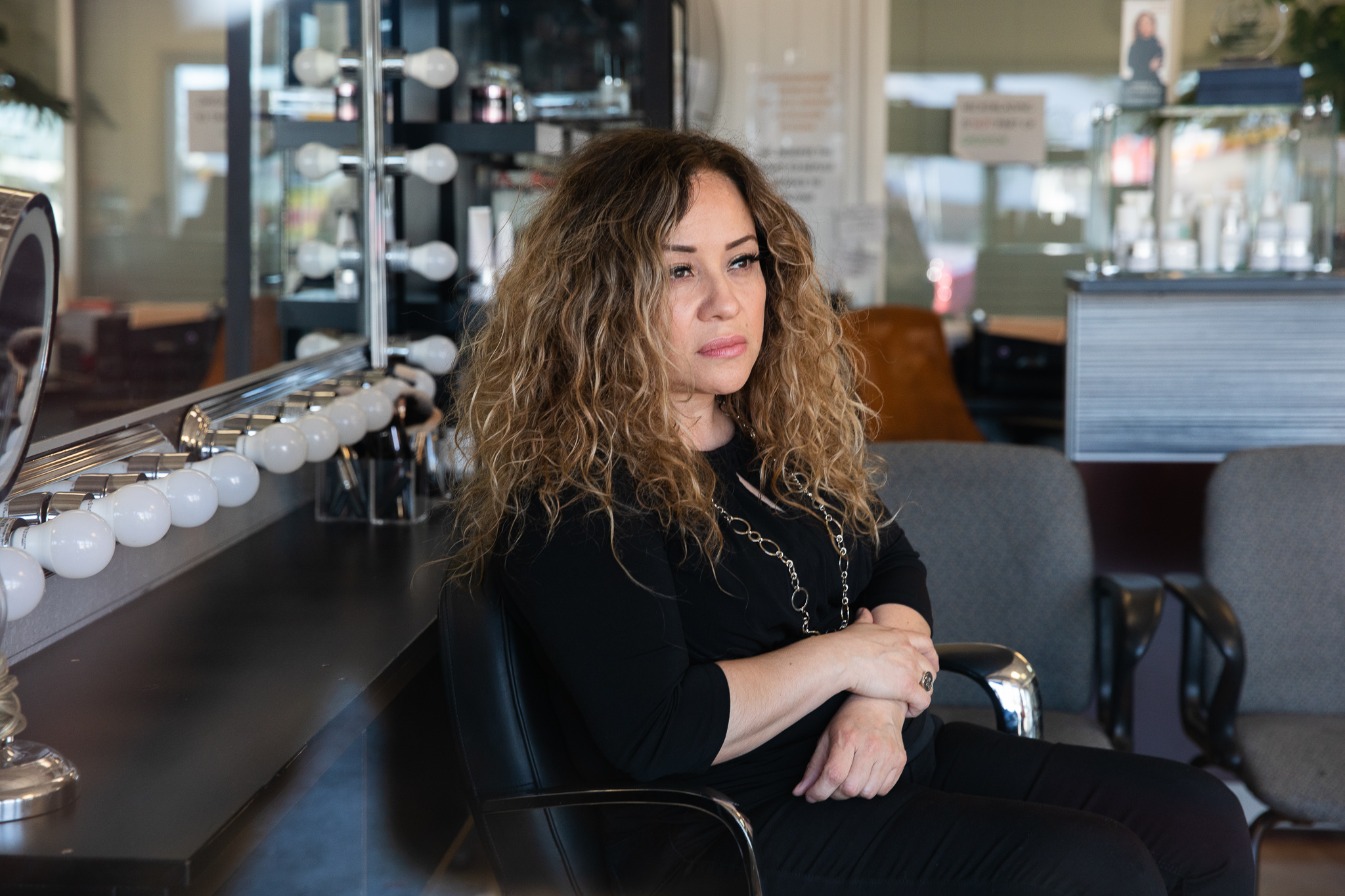 America Jacinto, a hairstylist at her salon in Lynnwood, sits in one of the chairs where she normally cuts clients' hair until Gov. Jay Inslee mandated a “Stay Home, Stay Safe” order across the state of Washington. Photographed April 12, 2020. (Matt M. McKnight/Crosscut)

Like so many Americans, Alberto Inocencio Ortega is struggling in the midst of the pandemic. In a normal year, Inocencio would work at restaurants during the winter months and do landscaping and light construction in the warmer weather.

While state and federal programs are helping millions of unemployed Americans pay their bills during the COVID-19 pandemic, undocumented immigrants like Inocencio do not benefit from that assistance, even if they’ve been paying taxes in this country for many years.

Inocencio, 46, is originally from Mexico, but has lived in the U.S. for about 16 years. He has been left with no income outside the occasional odd job. His rent is modest — $490 a month for a shared one-bedroom in Tukwila — and he receives food vouchers for fresh fruit and vegetables through Seattle’s Fresh Bucks program and uses food banks. He also recently received a small amount of cash assistance from Casa Latina, a Seattle nonprofit that runs a day-labor program. But Inocencio is worried he might eventually be forced to turn to a homeless shelter.

“For now we’re still renting,” Inocencio said in Spanish. But if businesses remain closed for long, he said, “there’s going to be more problems.”

Unlike other workers, undocumented immigrants like Inocencio are not eligible for unemployment. Immigrants without work permits also do not qualify for the direct cash payments — up to $1,200 — that the federal government has promised individuals as part of the $2 trillion COVID-19 relief package Congress passed last month, even if they pay taxes or their children are U.S citizens. On top of all that, low-income immigrants often lack savings and health insurance.

Nationwide, there are approximately 10.5 million to 12 million undocumented immigrants living in the U.S., according to the Brookings Institution, with an estimated 250,000 in Washington state. Immigrant advocates argue that’s too big of a segment of the labor force to leave behind.

“The need that we’re seeing is greater than anything than any of our organizations can meet, and government should really be stepping up,” said Paul Quiñonez Figueroa, a member of the Washington Dream Coalition, a nonprofit network of young, undocumented immigrants.

“It should not be individual people having to fill in the gaps,” he said.

Because of the lack of state and federal benefits for undocumented immigrants, some cities have taken matters into their own hands. The mayor in Minneapolis established a $5 million fund for anyone impacted by COVID-19 and making 30% or less than the area median income, regardless of immigration status. The funds are distributed directly to landlords and utility companies.

On Friday, United Way of King County, in partnership with King County, the city of Seattle and the Seattle Foundation, announced its own $5 million fund for rental assistance for households that have lost all or part of their income due to the pandemic. In order to qualify, individuals, including undocumented immigrants, must make below 50% of the area median income.

Officials estimate the funds will help up to 2,000 families, but they cautioned the demand for help with rent is far greater and that money for each applicant could not be guaranteed.

Mayor Jenny Durkan also made funds available for small business owners, requiring only a Taxpayer Identification number to apply, but the period for the first round of applicants closed last month. On Monday, the city announced the recipients of the $10,000 grants. Nearly 80% of the 250 grantees identify as small business owners of color, Durkan's office said in a press release.

Kelsey Nyland, a spokesperson for Durkan, said the city is trying to acquire additional funding for small business owners since it received more than 9,000 applicants. She added that one major way the city continues to reach out to underrepresented groups is by translating information about available resources into various languages.

Mike Faulk, deputy director of communications for Gov. Jay Inslee, said Washington state’s moratorium on evictions applies to everyone who can’t pay their rent on time, regardless of immigration status.

While individuals cannot currently be evicted, advocates continue to worry about the long-term economic impact of families who end up months behind on rent.

Left with little recourse here in the Pacific Northwest, the 25-year-old Quiñonez, together with other members of the Washington Dream Coalition, have established an emergency fund to help undocumented immigrants during the pandemic. The fund was founded in partnership with other groups, including Scholarship Junkies, Northwest Immigrant Rights Project and the Washington Immigrant Solidarity Network. The organizations have already met their initial fundraising goal of $100,000, but thousands of people have been put on a waiting list.

Quiñonez said the organizations plan to continue fundraising, while assessing needs on an individual basis and distributing anywhere from $500 to $1,000 to as many people as possible. 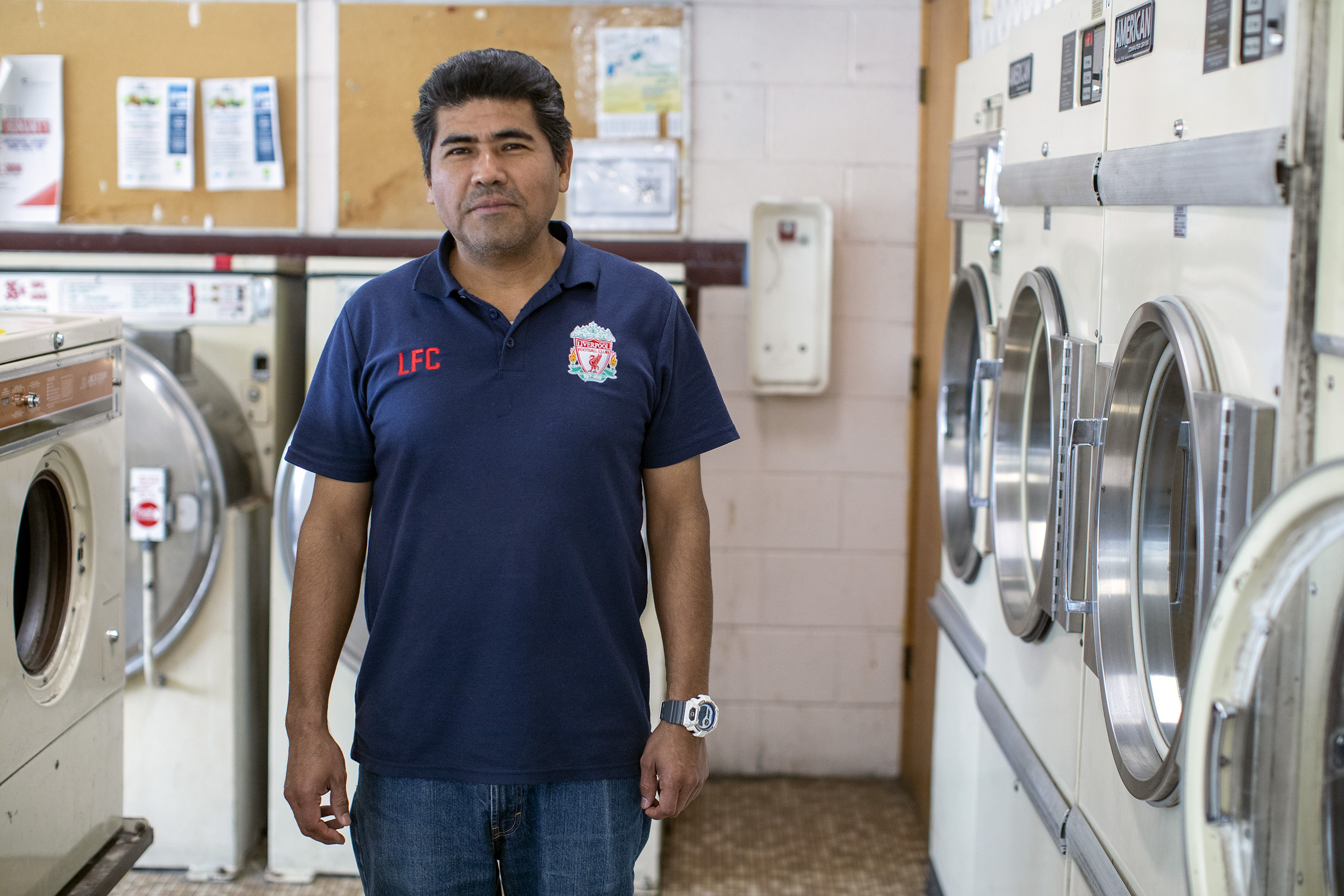 Alberto Inocencio Ortega, a worker who lives in Tukwila, is photographed at his local laundromat while waiting for his clothing to dry, April 6, 2020. (Matt M. McKnight/Crosscut)

Alberto Inocencio Ortega, a worker who lives in Tukwila, is photographed at his local laundromat while waiting for his clothing to dry, April 6, 2020. (Matt M. McKnight/Crosscut)

Daniela Murguia, 24, another member of the coalition, said her mother, an undocumented immigrant who owns a hair salon in Lynnwood, has earned zero income since the business closed. Murguia’s little sister still lives at home and, although the two might have enough to make ends meet until the end of the month, the future remains unclear.

Her mother, America Jacinto, got a break on rent for her business — only 50% is due in April — but the same does not apply for her home.

Advocates have established other resources for emergency help, such the Walla Walla Mutual Aid Network, created by the community organization Central Washington Justice for Our Neighbors and a team of volunteers. But none of these grassroots efforts seem able to keep up with the demand.

Even undocumented workers able to work in the midst of the pandemic because they are deemed essential are often doing so by risking their lives, Quiñonez said. His parents work in construction and agriculture in the Tri-Cities and must report to their respective jobs, yet they don’t qualify for benefits. They have two school-age children to support, as well as a sophomore at the University of Washington, who returned home because in-person classes were canceled. 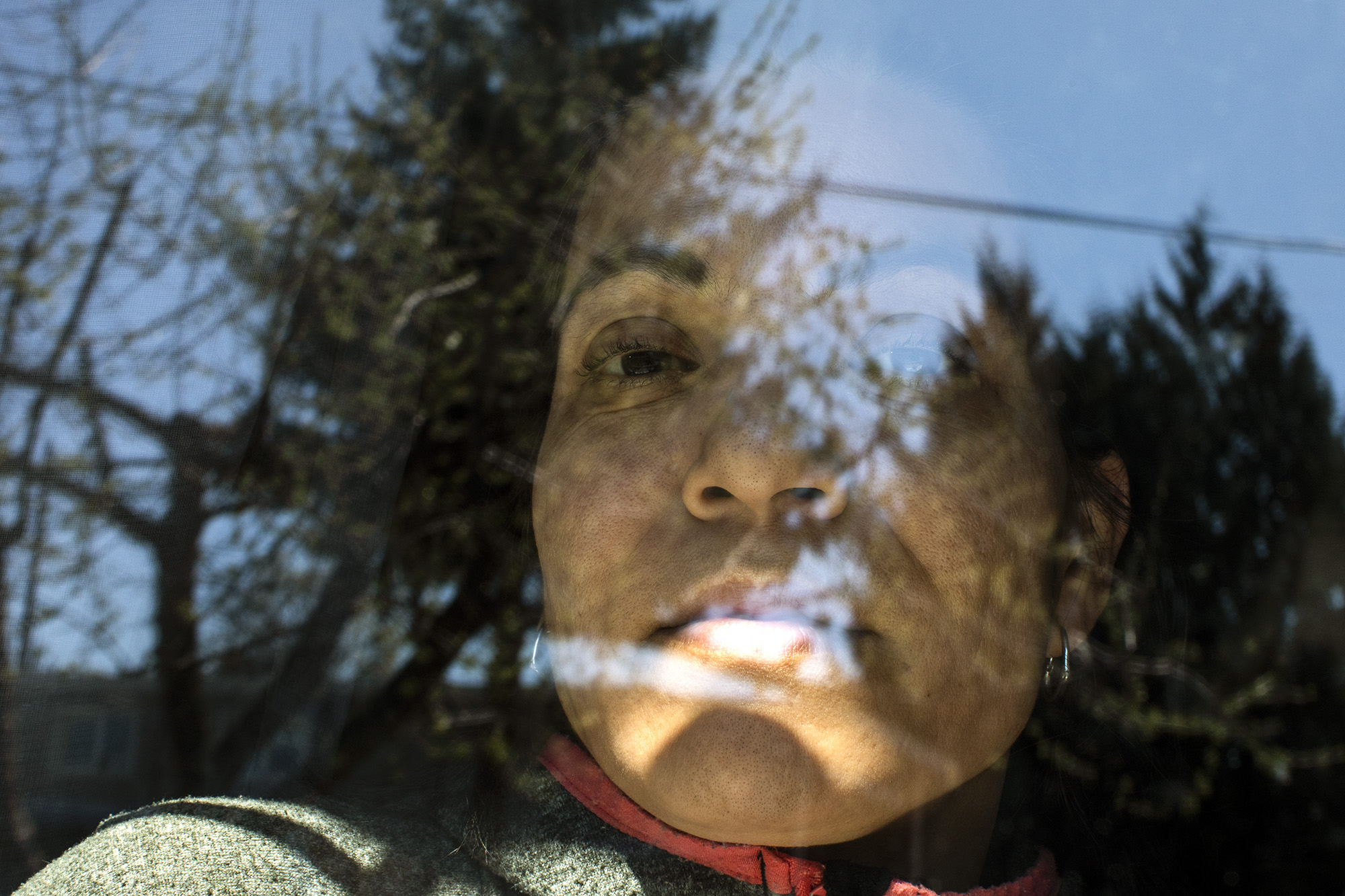 In South Seattle, Minerva Alavez, 43, is usually able to scrape by between her allotment of houses to clean and her partner’s work painting and remodeling apartments. But no one wants their homes cleaned right now, Alavez said, and her partner has been ordered to stay home.

Alavez, who usually rotates between four homes, said two of her employers have promised to continue to pay her at least half of her usual wages, even without her actually cleaning. Still, that provides her and her family only with about $500 a month.

The couple, who live in Renton, have two children: one is a U.S. citizen and the other is a recipient of DACA, or Deferred Action for Childhood Arrivals, a program that allows certain immigrants who arrived in the United States as children to remain in the country.

Free lunches through the public school system provides a little assistance, Alavez said, but the family is mostly worried about making the $2,100 mortgage payment for their four-bedroom house she shares with her sister, who also cleans homes for a living.

“We don’t know what will happen with the house,” Alavez said.

“We’ve always tried to get by without seeking help and make it on our own,” Alavez explained in Spanish. “But now it’s getting really bad, and we really do feel like we need help.” In addition to applying for aid at various nonprofits, the family is searching for a personal loan that won’t charge too much interest.

“We’ve sacrificed a lot,” Alavez added. She explained that she hasn’t seen her family in Mexico in about 18 years and was in the process of paying off $2,000 in income tax before the pandemic hit.

“What we want is to be all right here because this has become our country,” she said.

Those who are willing to seek assistance worry they could jeopardize their chances of living and working permanently in the U.S. because of a Trump administration rule implemented in February.

The so-called “public charge” rule makes it more difficult for low-income immigrants in the U.S. who use public benefits, such as food stamps, welfare and Medicaid, to qualify for a green card or extend or change their temporary status in the U.S., although exceptions have been carved out for coronavirus-related care.

The COVID-19 pandemic remains “a pretty urgent crisis for most of the people we serve,” said Dee Christoff, director of development and communications at Casa Latina. She said the organization has already given its current members what it can: small amounts of cash assistance — from $100 to $400.