Initially pleasantly surprised by the high court’s ruling, Dreamers in Washington are looking toward the presidential election for a more permanent solution. 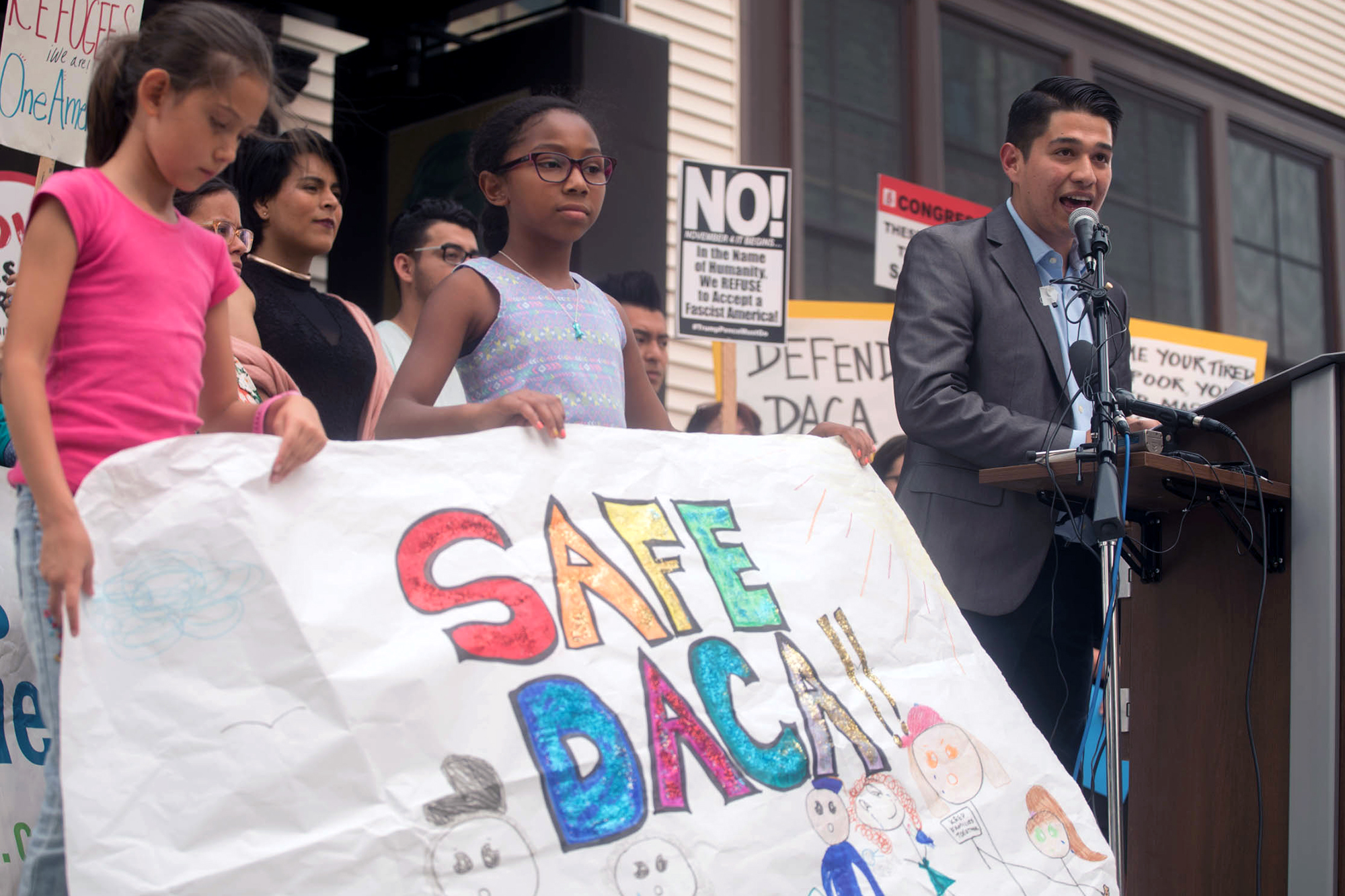 In a livestreamed meeting with Inslee, Chege — a DACA recipient, or Dreamer, and director of the Washington Census Alliance — demanded that Inlsee call on the Democratic nominee for president, presumed to be Joe Biden, to expand DACA and end deportations on day one of the new administration if elected.

In an open letter published after the meeting, Chege and other DACA recipients also insisted that Inslee commit to defunding U.S. Immigration and Customs Enforcement, or ICE — much like demands from anti-racism activists insisting that Seattle leaders defund the police.

The dramatic exchange, which circulated on social media, highlighted how little time DACA recipients spent celebrating the Supreme Court decision before beginning to plot their path toward U.S. citizenship for themselves and other undocumented immigrants.

“Is there any reason they should be waiting on Congress’ inaction?” Chege asked Inslee, referring to his undocumented parents. “Do you think there is any reason that should happen?”

An estimated 800,000 people nationwide are DACA recipients, including 17,000 in Washington state. Former President Barack Obama created DACA in 2012 via executive order. It offers two-year work permits to those who have been in the country illegally since they were children. To qualify for the program, recipients must undergo a thorough background check; be under the age of 31 as of 2012; have lived continuously in the United States since 2007; and pay an application fee.

Two years after the creation of the program, Obama attempted to expand it so that parents of citizens or of lawful permanent residents would qualify. That program was called Deferred Action for Parents of Americans and Lawful Permanent Residents, or DAPA, but the Supreme Court blocked the DAPA plan in 2016.

The DACA program has benefited from a wide array of support, including from big corporations such as Microsoft, which was a plaintiff before the Supreme Court supporting the young, undocumented immigrants. But DACA recipients acknowledge the program is far from perfect.

It “does something to the psyche and mental development of a person to have to plan your life in three-year and two-year  intervals, and really never fully have certainties,” said Paúl Quiñonez Figueroa, a former DACA recipient who was able to adjust his status and gain a green card, a more permanent U.S. work permit. Quiñonez, 25, is an organizer with the Washington Dream Coalition, a youth-led organization pushing for immigrant rights.

Following the June 18 Supreme Court decision, DACA recipients are still not only concerned with retaining the program, but expanding it. They have renewed their call to have more undocumented immigrants qualify so they, too, are protected from deportation.

President Donald Trump himself has given mixed signals about what he intends to do, at one point tweeting that he plans to try once again to end DACA following the process the Supreme Court outlined when it ruled last month that the administration could not immediately halt the immigration policy. In its decision, the justices made clear that the Trump administration had failed to follow procedural requirements in the law that insists on “a reasoned explanation for its action."

Many experts agree Trump is unlikely to have enough time to definitively end the program before the November presidential election, but that hasn’t stopped activists and politicians from cautioning him not to do so. On July 1, Inslee and 85 Democratic members of the state Legislature sent a letter to Trump warning him that ending DACA would “cause staggering costs to our economy and substantial injury to employers across our state.”

In contrast, Trump has also made promises on Spanish television about DACA, signaling that he would sign an executive order on merit-based immigration that would include a path to citizenship for DACA recipients. Many suspect the president has changed his tune on DACA in an effort to gain the Latino vote before the election.

“I think he's reading the writing on the wall, which is that he's behind at the polls, and it's unsurprising to me that he got Goya Foods to publicly endorse him,” said Luis Cortes-Romero, a 32-year-old DACA recipient and immigration lawyer who helped argue the Supreme Court case. Goya, which claims to be the largest Hispanic-owned food company in the U.S., has faced backlash after the company’s CEO lauded Trump at a White House event last week.

Quiñonez of the Washington Dream Coalition agrees that Trump is courting voters and hopes the Latino community won’t settle for vague promises about DACA.

“I have seen that play out online — a lot of friends posting the interview and thinking that it's a done deal and thanking Trump and whatnot,”  Quiñonez said referring to an interview on Telemundo. “I would think, in general, that's a small portion of our community. I think most of our community knows that promises aren't enough.”

“Everything horrible that he’s done to our community in the past two years — the detaining of Central American migrants at the border, the caging of them, the hate crimes that he's contributed to — ... none of that is going to change by him promising something. So I would hope that our community is smarter,” Quiñonez added.

Outside of what happens to DACA in the future, there are concerns about the program as it now stands. The Trump administration has not accepted new applications since 2017, although that is expected to change later this month. Cortes-Romero, the immigration lawyer, also said the Trump administration could opt to preemptively issue deportation orders in case there are any lapses in the program or with someone’s application, much like lapses with a driver’s license. The immigration agency in charge of processing DACA applicants —U.S. Citizenship and Immigration Services — is in jeopardy, preparing to furlough 13,400 employees unless Congress provides a $1.2 billion bailout by August. The furlough of employees could lead to a slowdown in processing DACA applications and renewals.

For now, DACA recipients are processing renewals while they can. Julio Maldonado-Guzman, 23, recently relocated to the Rio Grande Valley from Seattle to be close to his family during the COVID-19 pandemic. Maldonado-Guzman, who has been a DACA recipient since age 16 and worked at Little Caesars as a dishwasher, used Immigrants Like Us, a legal nonprofit that helps people prepare their immigration forms for free, to renew his application. Fernando Urbina, a student at Harvard who helped start the nonprofit, said he’s seen an uptick in DACA renewal applications since the Supreme Court decision.

Maldonado-Guzman, a tech worker, said he was initially elated at the news that the Trump administration had lost the Supreme Court case. But his mood quickly changed once he started learning more.

“I was very disappointed because we expected, or at least I expected, a more permanent and absolute position,” Maldonado-Guzman said.

He sees voting in the upcoming election as the only short-term path to a more permanent solution.

“If you really want to support DACA recipients, you need to vote blue cause Biden was a part of Obama's administration,” he said. “I can see Biden giving us a path to citizenship.”

This story was updated to correct Paúl Quiñonez Figueroa's role as an organizer at the Washington Dream Coalition.