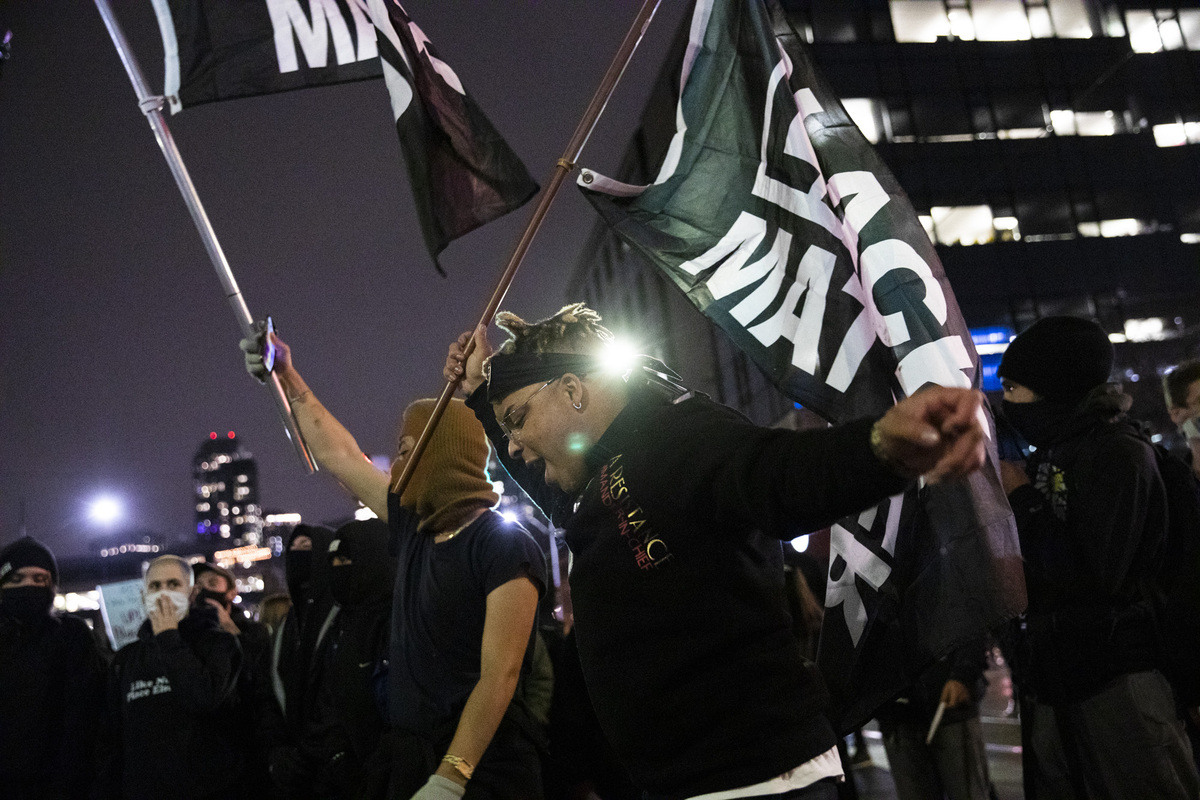 Black religious leaders in Seattle haven’t always agreed with the direction of this year’s Black Lives Matter movement, but the two branches of this activist spectrum are showing signs of coming together at the end of an unprecedented year of protests and human suffering.

This past summer, some religious leaders stood in defense of former Seattle Police Chief Carmen Best, as others called for her resignation in response to her handling of protests against police brutality after the killing of George Floyd.

“We know that Black women in leadership have a hard time. And sometimes people like to crush them,” the Rev. Harriett Walden of Mothers for Police Accountability said at the time. “And I'm here to tell you, I would never let anybody, a white woman or anybody in power, crush a Black woman in front of me.”

At the time, some religious leaders also expressed disapproval of the Capitol Hill Organized Protest, or CHOP, an autonomous zone established for about a month over the summer, which the city later cleared after the death of two teenagers.

Six months later, some religious leaders not only acknowledged the movement’s achievements, but expressed a desire to work together with activists in the coming year on the issue of police accountability.

Religious leaders continued to express skepticism over the activists’ main rallying cry of defunding the police by 50%, but they acknowledged much work remains to hold police accountable.

“I think there's a bigger health crisis in America that’s worse than coronavirus for our race. I still think it's racism,” said Bishop Garry Tyson of Goodwill Missionary Baptist Church.

“Until police have stopped killing Black people, things are not going to change. And for every one circumstance or situation of death that gets media attention, there are 60 more that never hit the media,” he said.

Bishop Reggie Witherspoon, pastor at Mount Calvary Christian Center, said that at the very least more of America is aware at the end of 2020 of the importance of the issues central to the Black Lives Matter movement.

“I think we've moved the needle a little bit, raising the issue of white privilege, systemic racism and that the playing field is not even,” said Witherspoon. “I think we've at least brought that awareness.”

In addition to raising awareness, Black Lives Matter activists can boast a number of other accomplishments: The proposed establishment of a Community Safety and Communications Center that would direct 911 calls. New Seattle city funding for alternatives to the Navigation Team, which together with police was in charge of sweeping homeless encampments. An almost 20% cut to the Seattle Police Department’s 2021 budget, which could lead to a reduction in the number of officers. Already, more than 134 officers have left the department in 2020. And $3 million to activists to set up a "participatory budgeting" process that will allow them to help make decisions in the spending of $30 million.

Bishop Tyson credits the protests in the street for what he believes are corrupt officers leaving the department.

“Police officers are resigning left and right. And I think, you know, the defunding, or the reform, has really caused those who got away with whatever they were doing that was unjust to realize, you know, you can't do that here anymore,” Tyson said.

Although all religious leaders said they hope more money will be invested in Black communities, others remained skeptical that cuts to the police department that lead to fewer officers would do any good.

Witherspoon said he believes a greater number of officers need to actually get to know the communities they serve.

“There needs to be some defunding, but if it means officers will not be able to get into these underserved communities to develop a relationship with them, then I think we're going to find out we’re going to have another set of issues coming up in the near future,” Witherspoon said.

“When you don't understand someone, you misunderstand them,” he added.

Witherspoon said he supports pushing forward on legislative changes rather than the 50% in defunding many activists are calling for.

“What we have to do is change the laws and get systems changed so that even if you're racist, you can be exposed. And that's really where we're going to start seeing the needle move,” Witherspoon said.

Police reform activist Andre Taylor of Not This Time pointed to improving Initiative 940 as an example of the needed legislative changes. I-940, which voters approved in 2018, rolled back the state’s restrictive language involving the prosecution of police officers and mandated independent investigations of deadly force.

In his legislative plan rolled out last week, Gov. Jay Inslee made several related proposals, including seeking $26 million to create an independent office to investigate police use of force.

“People respond to consequences,” Taylor said. Still, in the short time the new law has been in effect, police departments have not always followed its requirements.

The Pierce County Sheriff’s Department, for example, which was tasked with independently investigating whether Tacoma police were criminally liable in the killing of Manuel Ellis, failed to disclose until nearly the end of its investigation that one of its deputies had been involved in detaining Ellis, according to The Seattle Times.

Walden of Mothers for Police Accountability agrees that fewer police officers aren’t necessarily the solution, but she believes creating opportunities to hold officers accountable will help.

“If you have 10 police officers, you're still going to have a bad shooting,” Walden said.

What’s important, she said, is that officers be “treated like anyone else who has committed a murder.”

If a police officer goes to jail after an out-of-policy shooting, that will absolutely “send a chilling effect,” Walden said.

Walden said there also needs to be a way to decertify police officers so that bad cops can’t simply move to a new department in a different city. She also thinks the governor’s plan to form a new state office to investigate police killings is a step in the right direction.

In a sign of her desire to create unity, Walden said she returned a $25,000 grant to Black Lives Matter Seattle-King County after the organization revoked its endorsement of the demands made by King County Equity Now, which has been at the forefront of the fight to defund police.

Black Lives Matter Seattle-King County said it revoked its endorsement after “blatantly transphobic and homophobic comments were made by its leader” at an event. King County Equity Now said the allegations are false and that its coalition includes and stands in strong solidarity with the LGBTQ community.

Tyson pointed to wins in other cities with regard to police officers, such as Minneapolis reexamining the requirement that police officers intervene in situations like the one that led to Floyd’s killing. Ultimately, however, the Minneapolis City Council did not vote to cut its police force, although it did shift $8 million from the police department toward violence prevention and other programs.

Tyson also considers the arresting of police officers involved in what many consider the murder of Floyd to be a sign that government officials are heeding the message of the Black Lives Matter movement.

“I haven't seen in my lifetime where officers got arrested for killing a person that quick,” Tyson said.

Many activists, however, believe the time for police reform has passed and that the only path toward real change is the reduction and, eventually, the dismantling of police departments themselves. But many also say this is a time for working together across the Black community.

Victoria Beach, chair of the Seattle Police Department’s African American Community Advisory Council, said the various viewpoints within the Black community will necessitate some compromises in the coming year.

“I think we want the same things. We have to hold police accountable,” Beach said.“We have to stop African American men, women and children from being murdered. But we have to do it together.”

Updated to include statement from King County Equity Now.