From left: 18-year-old José, 20-year-old Argentina and her 15-month-old son, and 15-year-old Suamy. Having each faced the immigration system as unaccompanied minors, the three young organizers are starting a mutual aid group to advocate for and support other unaccompanied and undocumented youth in the Seattle area. They are calling their new group Super Familia. (Dorothy Edwards/Crosscut)

The ankle bracelet, or “grillete,” was going off every five minutes, startling José. It had recently been barking at him in Spanish, since he fled the youth detention center in Fife on his 18th birthday. It instructed José to report to U.S. Immigration Customs Enforcement, or ICE.

Unaccompanied youth such as José, who is originally from El Salvador and now lives in the Pacific Northwest, are often housed in youth detention centers scattered across the country and run by the U.S. Health and Human Services Department’s Office of Refugee Resettlement. But if no family or sponsor has been found by the time these youth turn 18, ICE transfers them to an adult facility.

Upon turning 18 in May, José ran before he could be transferred to the Northwest ICE Processing Center in Tacoma or another adult detention facility, walking out the door, ankle shackle and all.

Then, out in the real world, José found other unaccompanied youth who had arrived in Washington state at various stages of life.

Argentina, a 20-year-old mother to a 15-month-old boy, first arrived in the United States six years ago, when she was 14. The youngest of the group, Suamy, has been here for about a year.

The youth must navigate life largely on their own. Together they troubleshoot problems made more complex by living in a foreign country and dealing with an immigration system that they believe has stacked the cards against them. Can I qualify for a driver’s license? What about a work permit? How do I get medical care?

They call themselves Super Familia, a grassroots group led by and for unaccompanied and undocumented youth. Family isn’t just defined by blood but include those who support one another, Argentina explained. In addition to helping one another, they protest immigration detention in all forms, including youth detention.

“We speak for ourselves. There aren’t people who are telling us what to do. We make the decisions and help one another. And we want the group to grow and get the attention of others so together we can avoid additional trauma,” the oldest one, Argentina, said in Spanish in a recent phone interview. She says she is a survivor of domestic abuse.

The group, for example, recently ran a social media campaign to encourage others to direct extra cash from the stimulus checks that U.S. citizens received from the federal government to Super Familia. They hope to use some of the money to save for medical emergencies.

José, who arrived in the United States approximately six years ago when he was a 12-year-old boy, says he has experienced his own trauma. Due to abuse, he ran away from home at about the age of 14 and a couple years ago was caught drinking and driving without a license. After stints in Houston and Chicago, he landed at the Selma R. Carson Home in Fife. The 20-bed center serves unaccompanied youth exclusively, from ages 13 to 17.

Across the U.S., there are approximately 100 youth centers for the roughly 15,000 unaccompanied minors who traveled to the U.S. last year. Some of these centers have left children vulnerable to abuse, according to news reports. The Selma Carson Home in Fife is run by Pioneer Human Services, a Seattle-based nonprofit that currently holds up to a $2.6 million contract with the federal government for the center. There are at least two other nonprofits in the area that run programs for undocumented children: Kirkland’s Friends of Youth and YouthCare’s Casa de los Amigos in Seattle. 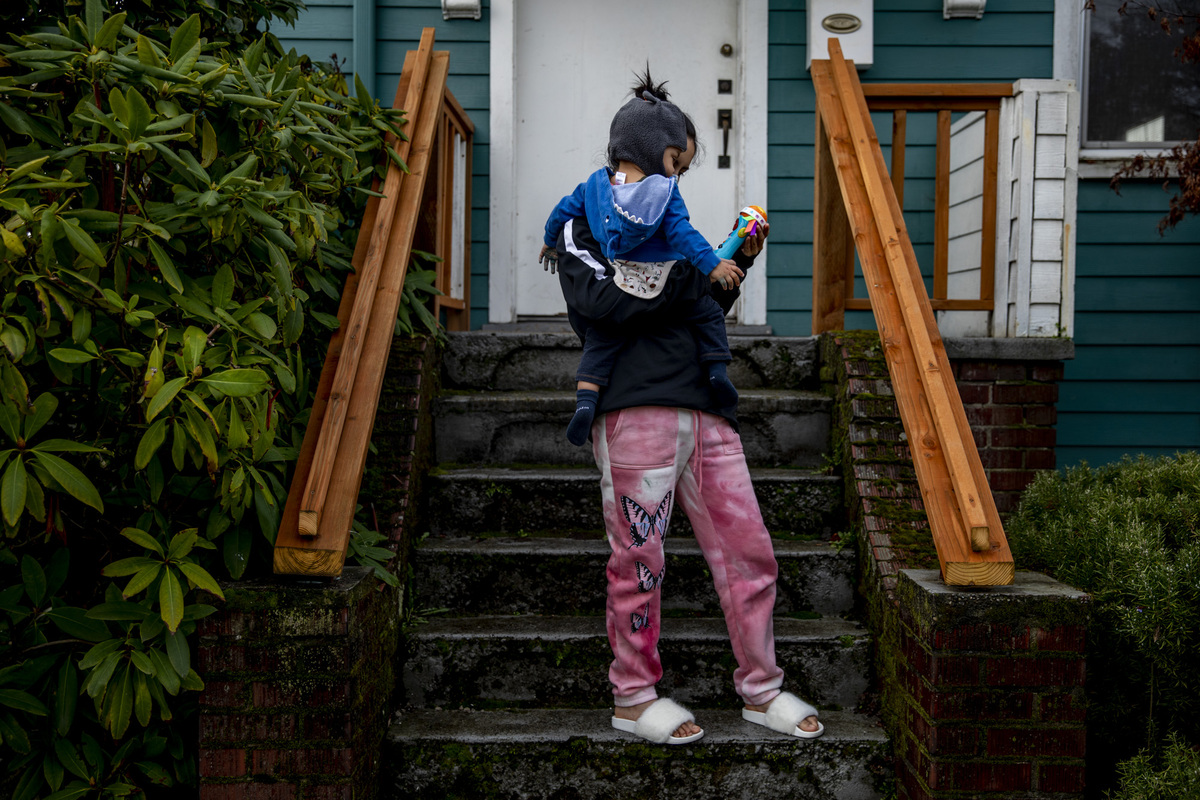 Argentina, 20, and her 15-month-old son outside of their home on Jan. 28, 2021. She and two other youth organizers who faced the immigration system as unaccompanied minors are starting a mutual aid group to advocate for and support other unaccompanied and undocumented youth in the Seattle area. They are calling their new group Super Familia. (Dorothy Edwards/Crosscut)

Argentina, 20, and her 15-month-old son outside of their home on Jan. 28, 2021. She and two other youth organizers who faced the immigration system as unaccompanied minors are starting a mutual aid group to advocate for and support other unaccompanied and undocumented youth in the Seattle area. They are calling their new group Super Familia. (Dorothy Edwards/Crosscut)

José himself said he has witnessed staff throw kids to the floor and against a table at the Selma Carson Home, in one instance to the point of bleeding. He also said staff there were not consistent about the use of masks during the COVID-19 pandemic.

“They tried to do the same to me,” José said in Spanish, referring to a time he refused to go to his room and staff became aggressive.

“The fault isn’t with the youth there but with the staff,” he said.

In response to questions about the alleged incidents, Art Tel, Selma Carson's director, said all staff at the facility are trained in administering what he referred to as therapeutic holds if safety becomes a factor. He also said staff have been instructed to wear masks at all times.

José is now living in a host home in Redmond with the help of Kids in Need of Defense, which provides legal services for youth.

Suamy, who is the newest to the country, was also briefly in detention, in Texas, after arriving from Honduras. She now lives with her sister in Federal Way. With the help of the community, Super Familia was recently able to raise enough money for a dress so that Suamy could celebrate her 15th birthday, or quinceañera. By reaching out through social media and other methods, the group raised almost $2,000 for a puffy lilac dress and a party.

Because of the pandemic, the celebration was held in a grassy area outdoors with a small group of people. Still, it was a rare opportunity for Suamy to be with others since arriving in the country in the middle of a health emergency. The group celebrated by playing music and cutting a cake decorated with the words “Feliz Cumpleaños Suamy” and flowers the same color as her dress.

Suamy is now in school, but for the other two, who are older, the barriers to work in this country because of their lack of citizenship continue to impact their daily lives. Argentina said she received a deportation order while still a teenager.

Still, she and the others in the group said they continue to try to lift one another up and focus on the positive. They also reach out to those still in detention and to others recently released. The youth hope to qualify for a special status offered to juveniles abused, abandoned or neglected by a parent and eventually obtain green cards.