Business owners of color are reclaiming the Seattle-area's favorite beverage. 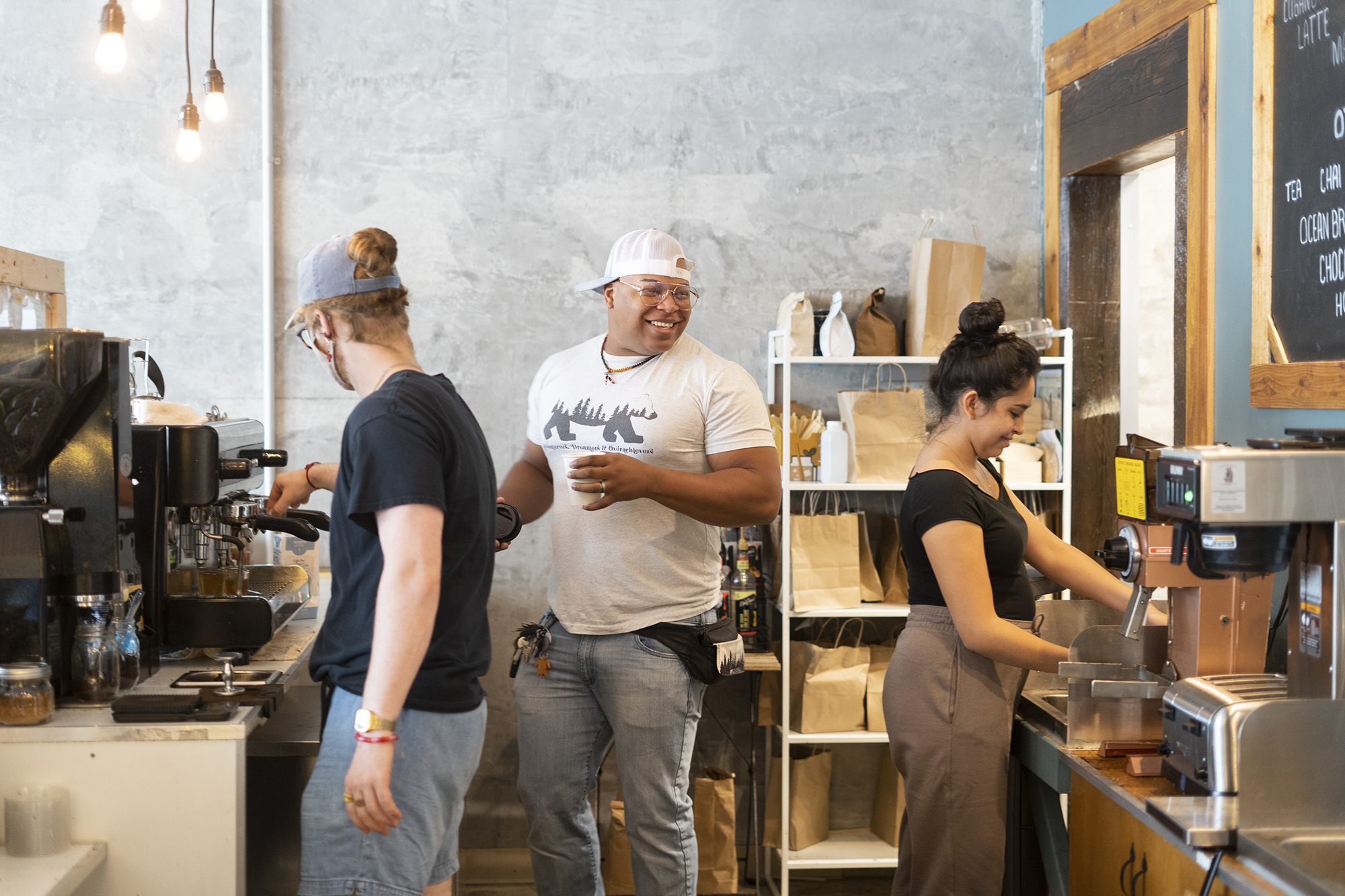 Quincy Henry, owner of Campfire Coffee, laughs with his employees behind the counter of the coffee shop in Tacoma. (Chloe Collyer for Crosscut)

A latte dressed with heart-shaped foam art awaits at your local Seattle cafe. It tastes good, as long as you can swallow the racism some say the coffee industry has yet to confront.

“Specialty coffee was not very welcoming to my Black face,” said Quincy Henry of his time on the road as a musician. “If you don't know as much as the barista behind the counter, then you probably shouldn’t be there. That’s kind of the vibe.”

Now he and his wife, Whitni, run Campfire Coffee, an outdoors-themed cafe in Tacoma that has “a social goal of getting diverse groups in nature.” Henry has been vocal in the past about how rare it is to see Black people in ownership roles in the outdoors and in coffee. He and his wife are trying to change that, one cup at a time.

Some have drawn attention to the strained relationship between people of color and specialty coffee, typically characterized by a moral focus on the supply chain and an appreciation for the flavors of a growing region. A recent example includes an Urnex blog post from June 2020, which explored anti-Blackness in specialty coffee. Over the past year a handful of people of color in and around Seattle have launched coffee businesses that might fall under the “specialty” umbrella, but go a step further in their efforts to support diversity.

“We do all of the stuff that specialty does, but that’s not our focus,” Henry said. “We’re not going to lead with teaching you about coffee.”

The Henrys, whose brick-and-mortar location opened last August, have made moves to diversify the outdoors and coffee. The Explorers Club, a nonprofit jump-started by the Campfire community, aims to make outdoor education and recreation accessible. The couple also try to hire with diversity in mind.

“You don’t have to be the hipster white dude with the glasses and the beard to work in coffee,” Quincy Henry said.

Or to drink specialty coffee.

In a national coffee trends report, Black respondents were less likely to indicate that they drank specialty coffee (like cold brew, cappucinos and lattes) the day before they were interviewed compared to Hispanic or white respondents. 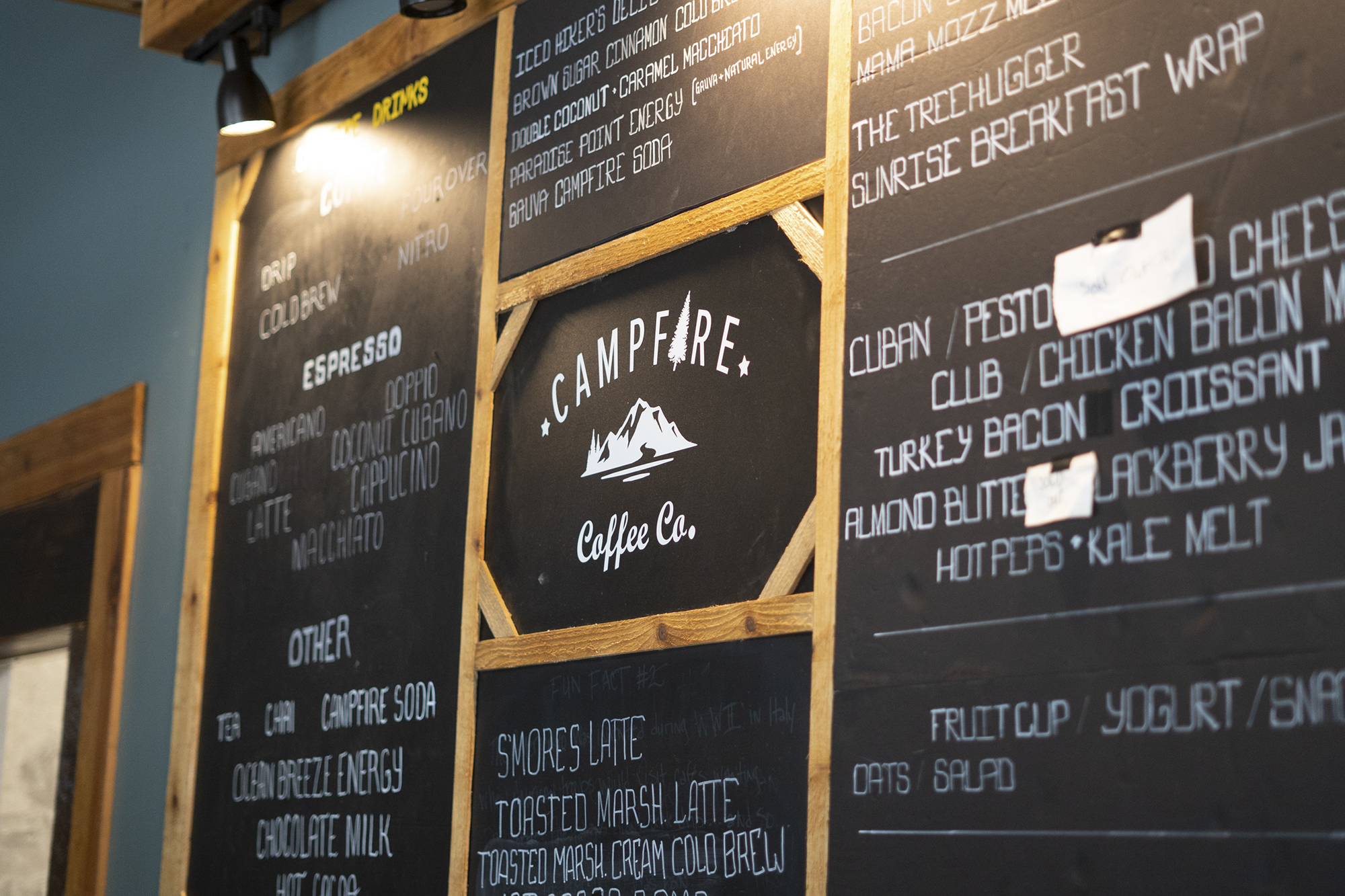 The hand-drawn menu board at Campfire Coffee is seen with the company's logo in the center. (Chloe Collyer for Crosscut)

The hand-drawn menu board at Campfire Coffee is seen with the company's logo in the center. (Chloe Collyer for Crosscut)

A little closer to the source

Some people are working outside of coffee shops to tackle the industry’s lack of diversity.

In February, Edward McFields of Federal Way launched NoirePack, a startup that sells packaged coffee from Black roasters around the country. The partners include the aforementioned Campfire, as well as roasters from Iowa, Georgia and California.

Shoppers can customize their coffee experiences by region (Africa or Latin America); roast (dark, medium, light or ー of course ー Campfire); and type (single origin or blend).

The product may be a little pricey for some: Different varieties of the roaster’s choice sample packs ー consisting of three 4-ounce bags ー  run consumers close to $30.

This is not lost on McFields, who believes people appreciate that the coffee is Black-owned.

“What we sell is not just coffee,” he said, noting a portion of NoirePack’s funds funnel to different organizations. The company pledges 5% of its sales to specific groups, including the Black Economic Alliance and the Urban League of Metropolitan Seattle.

McFields work largely focuses on the roasters, but his perspective on cafes echoes observations made by others.

“What’s funny is most of the coffee that’s coming in ー that’s imported to the United States ー  it comes from people of color,” he said with a laugh. “At the coffee shop, it’s different.”

One coffee shop owner quoted in a 2018 article from The Guardian described specialty shops as white-centric “in terms of the culture, the aesthetic, the music, the flavors, the employees.”

The founder of the Coffee Coalition for Racial Equity discussed race in coffee in an interview published by Sprudge in 2017. Phyllis Johnson described a diversity deficiency in cafes ー from the people working in them to the owners ー and touched on the impacts of gentrification.

“If I have lived there for years and years and all of a sudden I am being pushed out, I’m not going to say, ‘Hey, let’s go up to this new cafe!’ ” Johnson said. “Because my mindset is, ‘That cafe is really for them. It wasn’t here before they got here. They’ve created the cafes for them.’” 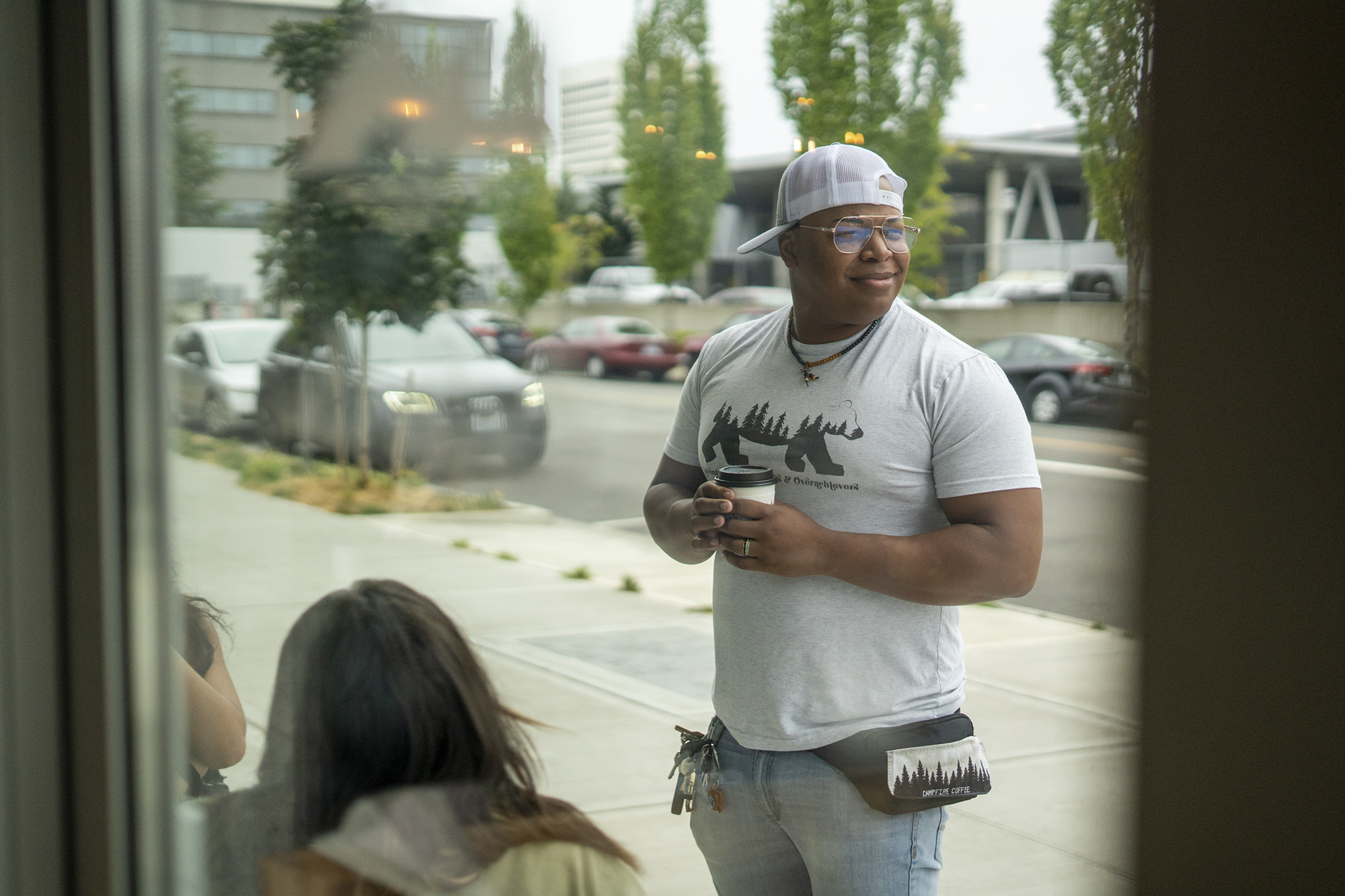 Quincy Henry, owner of Campfire Coffee, catches up with regulars outside the shop on Market Street in Tacoma. (Chloe Collyer for Crosscut)

Quincy Henry, owner of Campfire Coffee, catches up with regulars outside the shop on Market Street in Tacoma. (Chloe Collyer for Crosscut)

Like Campfire, other area establishments want to see people of color working in the coffee business, an effort that required some troubleshooting for The Station in Seattle.

“After realizing that I have three or four white employees, I was like ‘Yo, my business is not what The Station stands for,’ ” said Luis Rodriguez, who is Hispanic, of his coffee shop in the north Beacon Hill neighborhood.

He and his wife, Leona, who is Black, co-own The Station, which opened in 2010. The establishment’s online menu lists an assortment of signature drinks, including the Coco Chainel (a chai tea, coconut syrup concoction) and the Bowl of Soul (featuring honey, vanilla and Earl Grey tea).

Rodriguez views the business as a way to reclaim coffee, which he grew up drinking tempered with milk. In his eyes, white people owning a coffee shop is the epitome of appropriation.

Coffee grows only in brown and Black places, Rodriguez said.

The Station’s website explicitly mentions its effort to hire people of color from the community. Scroll down the page and you can spot the shop’s posts on Instagram, where the establishment unequivocally expresses political opinions that range from criticizing policing to condemning insurrectionists who stormed the Capitol on Jan. 6. 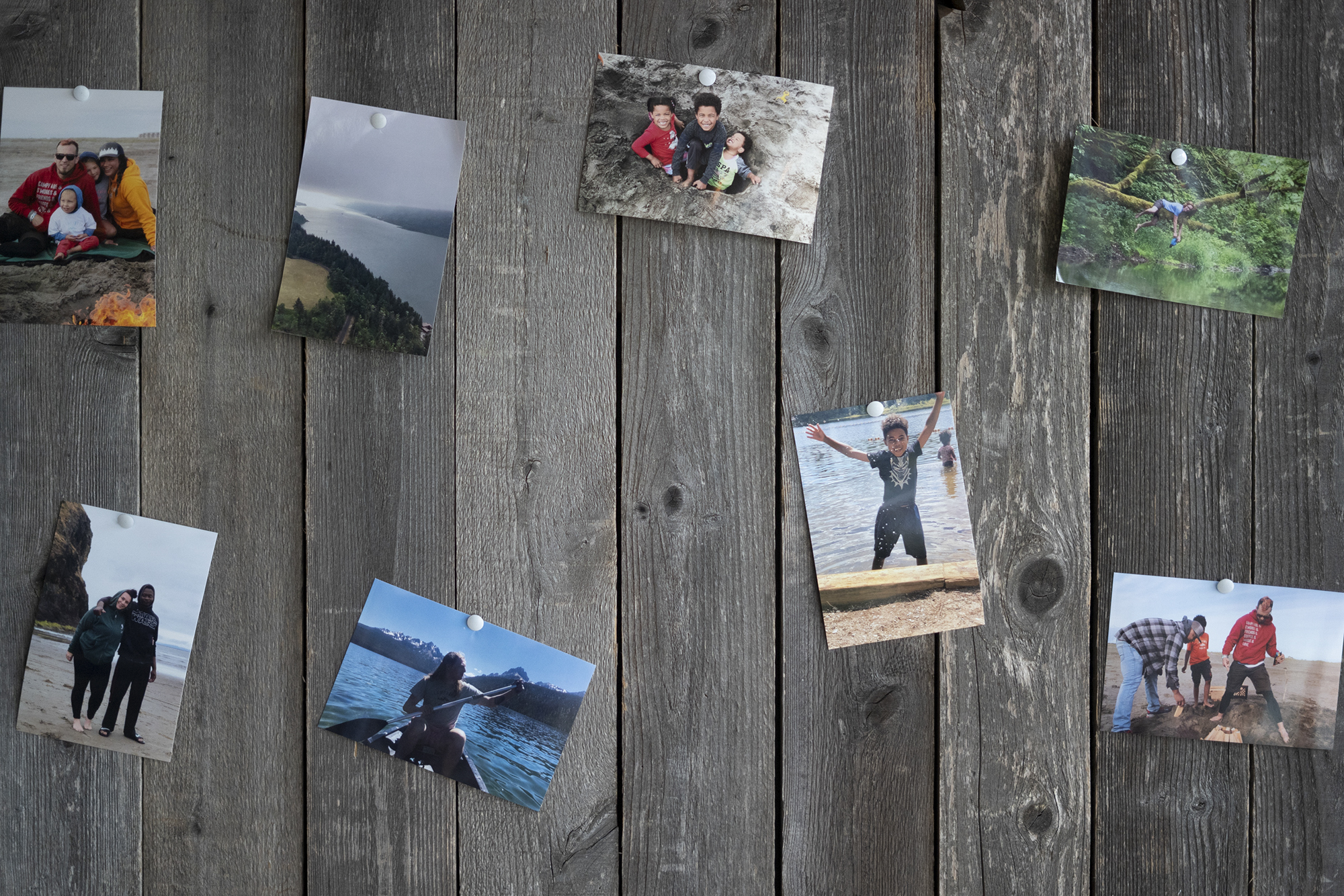 Images of coffee shop regulars enjoying the outdoors are seen posted on a wooden panel wall inside Campfire Coffee in Tacoma. (Chloe Collyer for Crosscut)

Images of coffee shop regulars enjoying the outdoors are seen posted on a wooden panel wall inside Campfire Coffee in Tacoma. (Chloe Collyer for Crosscut)

The Station isn’t the only biracial coffee shop invigorated by advocacy.

Savannah Jackson, who is Black and Ecuadorian, owns and manages Mixed, a coffee shop in Mill Creek that opened on Juneteenth. Jackson leaned into her activism, especially amid the Black Lives Matter movement, which resurged in 2020 after George Floyd was murdered by a white Minneapolis police officer. Her family wanted to find ways to give back to the community.

“Our goal is to honor, share and celebrate our community's growing diversity while providing a safe space for BIPOC to connect and organize,” Mixed states on its website.

Jackson grew up in Bothell, a short drive from the coffee shop. She recalled having only a few other students of color in her graduating class, so she recognized the importance of creating a space for people who look like her.

“I would have loved that when I was younger,” she said.

She still struggles as someone who is biracial, almost feeling that she needs to prove her claim to her identities. But the number of people who have expressed gratitude for the space they have in her coffee shop makes everything worth it.

Even the presentation feels deliberate in Mixed, where Jackson said the walls are adorned with pieces from local artists of color.

“I don’t think anyone in our area has so much of themselves in a coffee shop,” she said. “Me and my family and my employees, we put our entire being into our craft.”

Like Campfire and The Station, another coffee shop run by a couple opened in Shoreline last fall. Darnesha Weary, her husband and their daughter are all part of the team at Black Coffee Northwest Cafe and Community Hub, which kicked off its operations in October 2020.

In January, the establishment ー self-described as “a meeting place rooted in current culture” ーshared a snapshot of a menu on Facebook. It featured standard cafe menu items paired with alternative names in parentheses. Notable examples included the Americano, or the Africano; the cappuccino, also known as the Blackaccino; a chocolate mocha or, alternatively, a melanin mocha;  and a white chocolate mocha, coined The Karen.

Black Coffee gained recognition in recent months for several attacks lodged at the site, including an arson before the store opened and swastika graffiti. Despite these incidents, Weary still considers Black Coffee a place of joy.

“And resistance,” she said. “And accountability.”

This isn’t the last stop for Black Coffee Northwest. The team plans to expand into Ballard, as well as another undisclosed location. 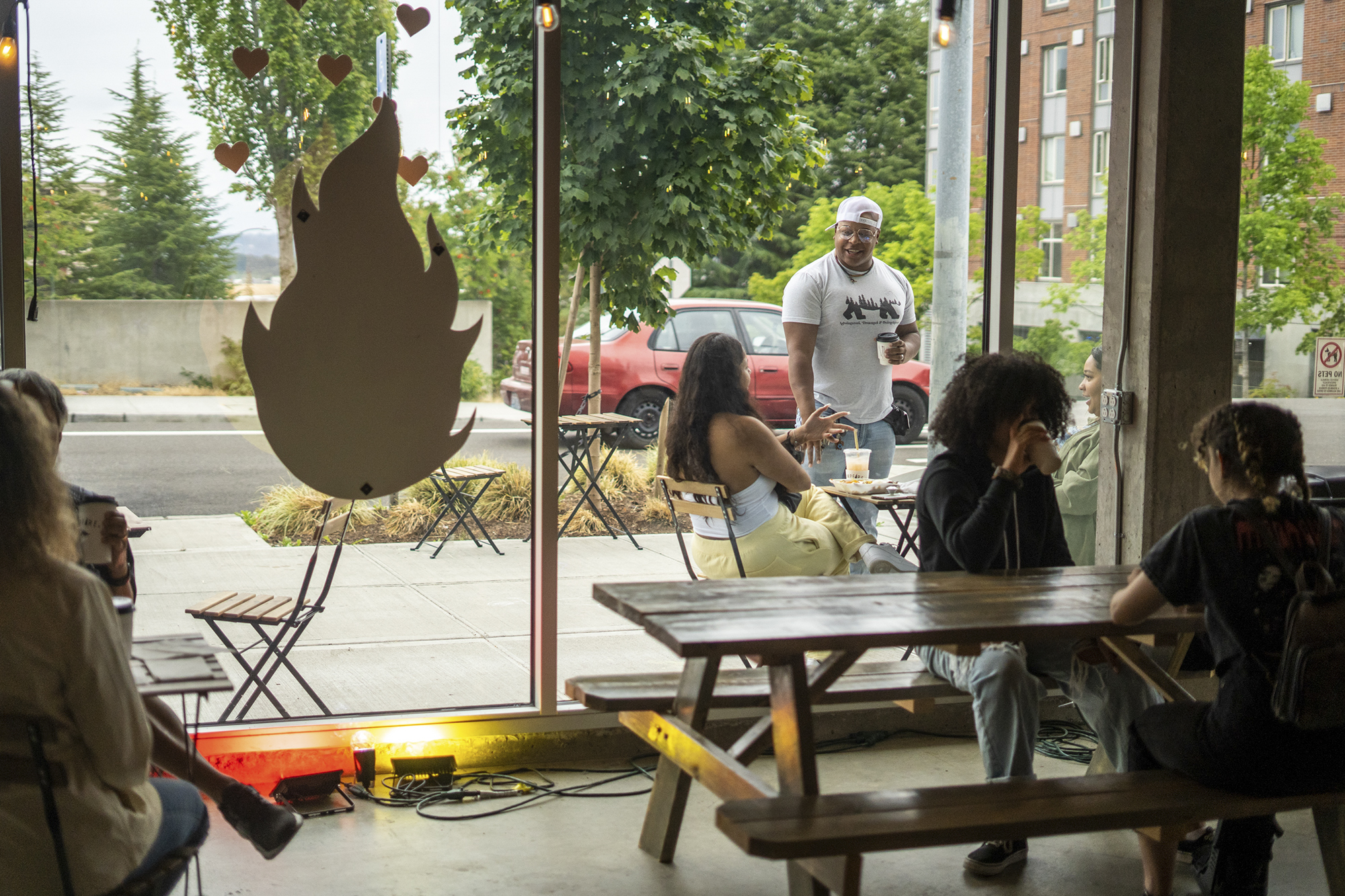