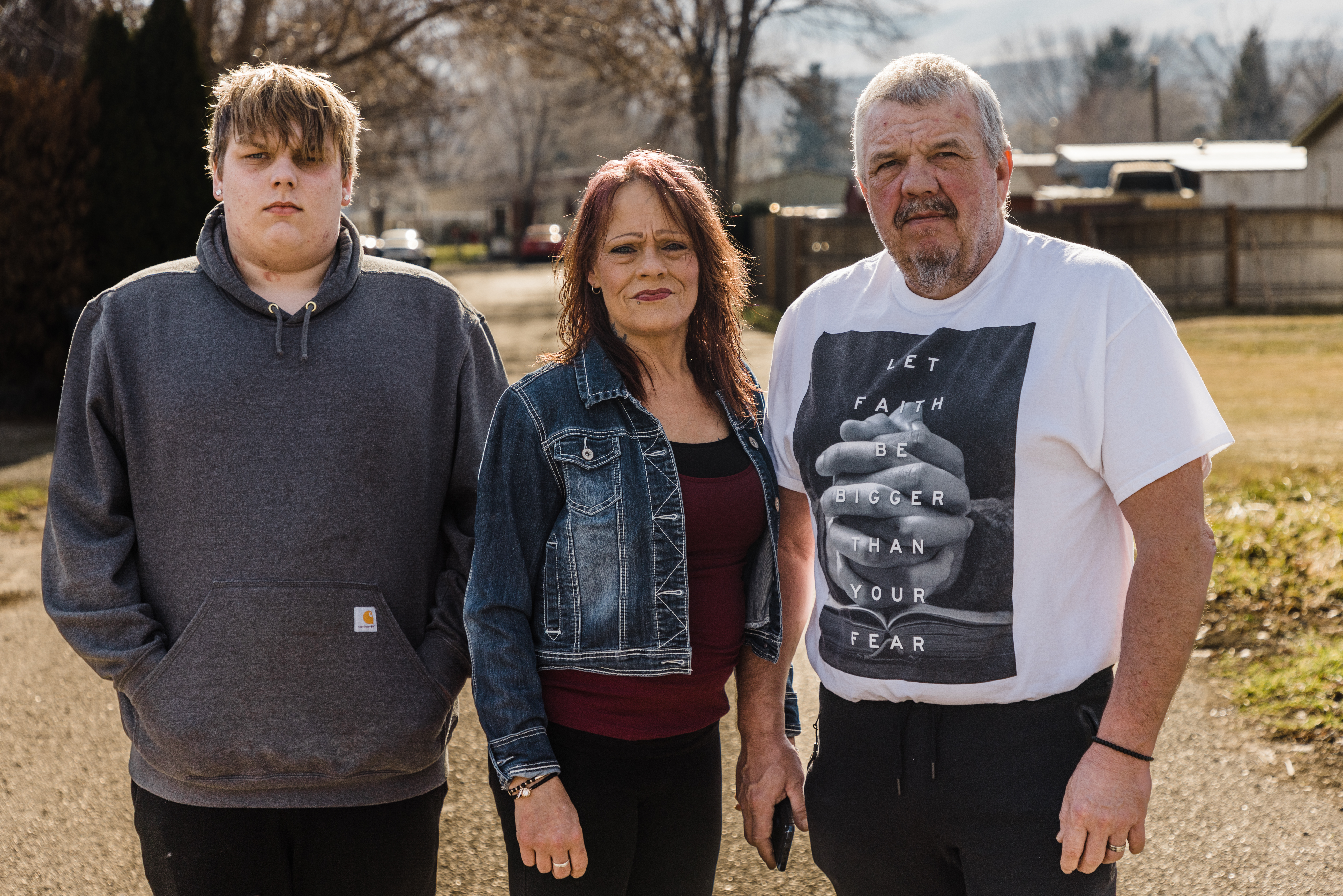 Trace Oakes, 17, stands besides his parents, Tonia and Tracey, outside their home in Benton City, Benton County, Feb. 6, 2022. (Jake Parrish for Crosscut)

The day that Tracy Oakes learned his son had been stopped by police and arrested for riding in a stolen car was a bad one. The afternoon he learned that 16-year-old Trace would be sentenced to nearly two months’ incarceration at the Naselle Youth Camp was worse. But the morning Oakes opened a letter from the state and learned that he was being billed $2,700 to cover the cost of his son’s imprisonment sent the then-single dad through the roof.

Although Oakes says he was never informed that Washington state charges parents for their children’s imprisonment, the state has been doing so since 1977.

Two bills under consideration in this session of the Washington Legislature would abolish so-called “parent pay” for juvenile rehabilitation lockups. Still under discussion is whether parents who currently owe money would have their debts forgiven.

At present, 242 families, including the Oakeses, owe a total of $1.1 million in outstanding fees for their children’s time in Washington’s juvenile prisons, in some cases years after these children have completed their sentences and returned home. The median charge is $537 per family, a not-insignificant amount for low-income households and enough to trigger wage garnishment.

“It’s an example of how a state that calls itself a leader in social justice, fails families,” said Rachel Sottile, president and CEO of the Center for Children & Youth Justice in Seattle, who supports the proposed law change.

It was written by the Department of Children, Youth and Families, which runs Washington’s three youth prisons: the Naselle work camp where Oakes’ son spent 57 days, the Green Hill School in Chehalis and Echo Glen Children’s Center in Snoqualmie.

“Almost all of those youth are going to come home, and we’d like their homes to still be there,” said Ross Hunter, secretary of DCYF, which also manages the state’s early learning, foster care, adoption and child protective services programs “But if you’re garnishing a parent’s wages to pay these fees, you might actually make that parent homeless because their kid got arrested. And then you’ve created this enormous problem. It just seems needlessly mean and financially stupid.”

Advocates across the country say, short of homelessness, parent-pay fees destabilize families, introducing extra strain at a particularly precarious moment, and increasing tensions when a child returns home after incarceration.

The proposed repeal of the parent-pay system, which has bipartisan support, does not wipe out fees for DNA collection, nor restitution paid to victims. But it would bring Washington in line with 11 other states — red and blue — that have similarly reformed their laws around juvenile-crime payments, also known as “legal financial obligations.”

Because nearly all youth in juvenile prisons nationally are from low-income families, Washington’s parent pay law falls disproportionately on the poor. In 2020, more than 450 families in Washington were referred to state assessors because they had children in lockup. Of those, some 80% were exempt from paying because their incomes fell below the poverty-line cutoff, according to DCYF. Further, the vast majority of children in lockup come from families of color. For these reasons, Allison Krutsinger, director of government affairs at DCYF, considers parent-pay policies out of step with current thinking about racial equity.

“When we know better, we need to do better,” she said.

Advocates point to research that suggests chasing down moms and dads for these fees actually costs more than it nets. Oregon, for example, found that staff time spent collecting the payments in 2019 amounted to more than their total debt of $864,000, according to Kia Franklin, executive director of the national advocacy group Stand for Children. In 2021, a Denver legislator said Colorado spent $1 for every 75 cents collected.

In Oakes’s case, the $2,700 bill for his son’s time at Naselle was both a shock and a financial hardship. Notice of the fee came just as Oakes was facing the possibility of a long-term layoff from his job as an ironworker as a result of COVID-19. (It also included an extra day’s stay at Naselle because a February 2021 snowstorm made it impossible to get Trace, his son, home on schedule). Wondering how he was going to cover basic expenses for his family during the pandemic, Oakes told the state that he could scrape together only $100 a month, a cost that would affect every member of the household, including Trace’s younger brother.

“All it’s doing is hurting people that are probably already in some sort of crisis,” Oakes said. “And I know there are families struggling even more than we were. It just ain’t fair.”

The state charges parents differing amounts, depending on their gross income and dependents. Those earning less than 150% of the poverty rate (about $40,000 for a family of four) are exempt. But for a family hovering just above that line, any extra expense can mean the difference between paying bills on time or racking up still more penalties for late fees.

“It creates such a vicious cycle, which is so unnecessary,” said Sean Goode, executive director of the Choose 180 youth-crime diversion program, who hailed the proposed law change as a reform long overdue. By the time a kid has been sentenced to time in a juvenile facility, so many social systems have failed them that Goode considers it unfair to heap all the blame on families alone.

“What it says to the parent is, ‘If your young person has a moment of poor decision-making, it’s your fault.’ But really, this is reflective of the community’s failure,” he said.

Many lawmakers seem to agree. Senate Bill 5535 and its companion, House Bill 2050 have received bipartisan support and moved swiftly through their respective chambers. So far, only a handful of legislators have opposed them.

One is Rep. Michelle Caldier, R-Bremerton, who believes it’s right that parents shoulder financial responsibility for their children’s behavior.

“I really do think they should have some skin in the game — even if it’s just $25 a month. If my daughter stole someone’s car, you better believe I would be liable for all the damages,” she said.

The fees are intended to help cover the cost of a youth’s incarceration and treatment while confined. But because only a small proportion of parents are assessed, and so few of them actually pay on time, DCYF has long built the full price of juvenile detention into its spending plans. Abolishing parent fees would require about $5 million over the next six years, according to the agency, a figure already included in Gov. Jay Inslee’s proposed budget.

Passage of the new law would not obliterate all charges incurred by families with children in the legal system. Counties, for example, are still allowed to levy fees against kids in juvenile court. But only one county — Chelan — actually does so, according to Dave Reynolds, president of the Washington Association of Juvenile Court Administrators, who supports the gist of these reforms.

“Many courts discontinued this practice years ago, as it cost much more to try and collect than was being collected,” he said in an email.

To Reynolds, other financial obligations are far more important, such as making restitution to victims. Overall, he said, parent-pay fees cause more problems than they solve, by making already-strapped families less inclined to help with the other end of a youth’s road to rehabilitation — the rules around probation when they come home.