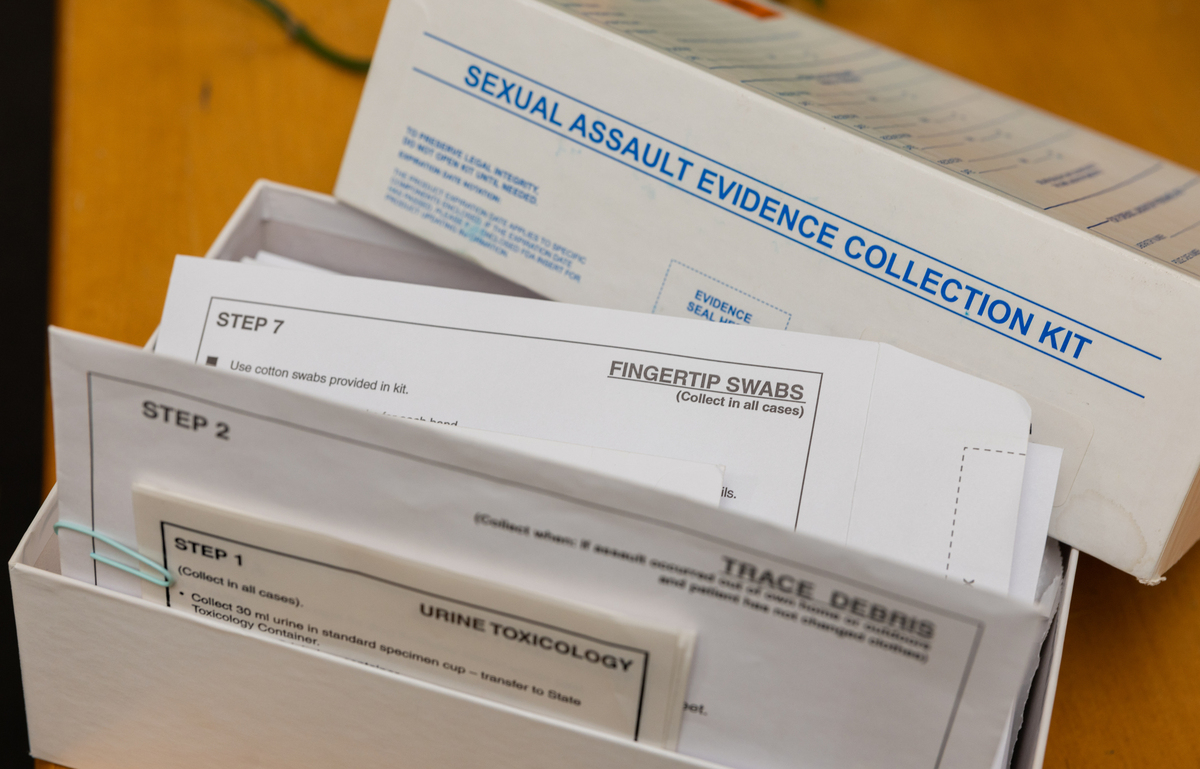 Lutheran Community Services Northwest has sexual assault evidence collection kits at its offices for its work with victims of violence and sexual assault. State legislators are working to increase the number of SANE nurses in rural areas.

Mike Martinoli was two weeks into his travel nursing assignment at Ferry County Memorial Hospital when a sexual assault victim arrived in the emergency department of the Eastern Washington hospital.

No one with the proper training was available to complete a forensic exam. During this multihour procedure, a nurse helps identify the victim’s health care needs and collects DNA evidence and documentation that law enforcement could use in prosecuting a case.

It wasn't clear if the victim ended up getting an exam. At the time, it would have required traveling to another hospital and the closest one was more than an hour away.

“It hit me at my core personally to not be able to help this individual,” Martinoli said of that 2017 experience.

Five years later, Martinoli is now chief nursing officer at Ferry County Health, which runs the hospital and several clinics. And he is one of three nurses trained as sexual assault nurse examiners, or SANE.

Martinoli’s story speaks to progress in the state’s ongoing efforts to improve the response to sexual assault. Getting more nurses to complete the sexual assault examiner training is a crucial part of that effort, as noted in a December 2021 report from a state advisory group on sexual assault forensic examination. 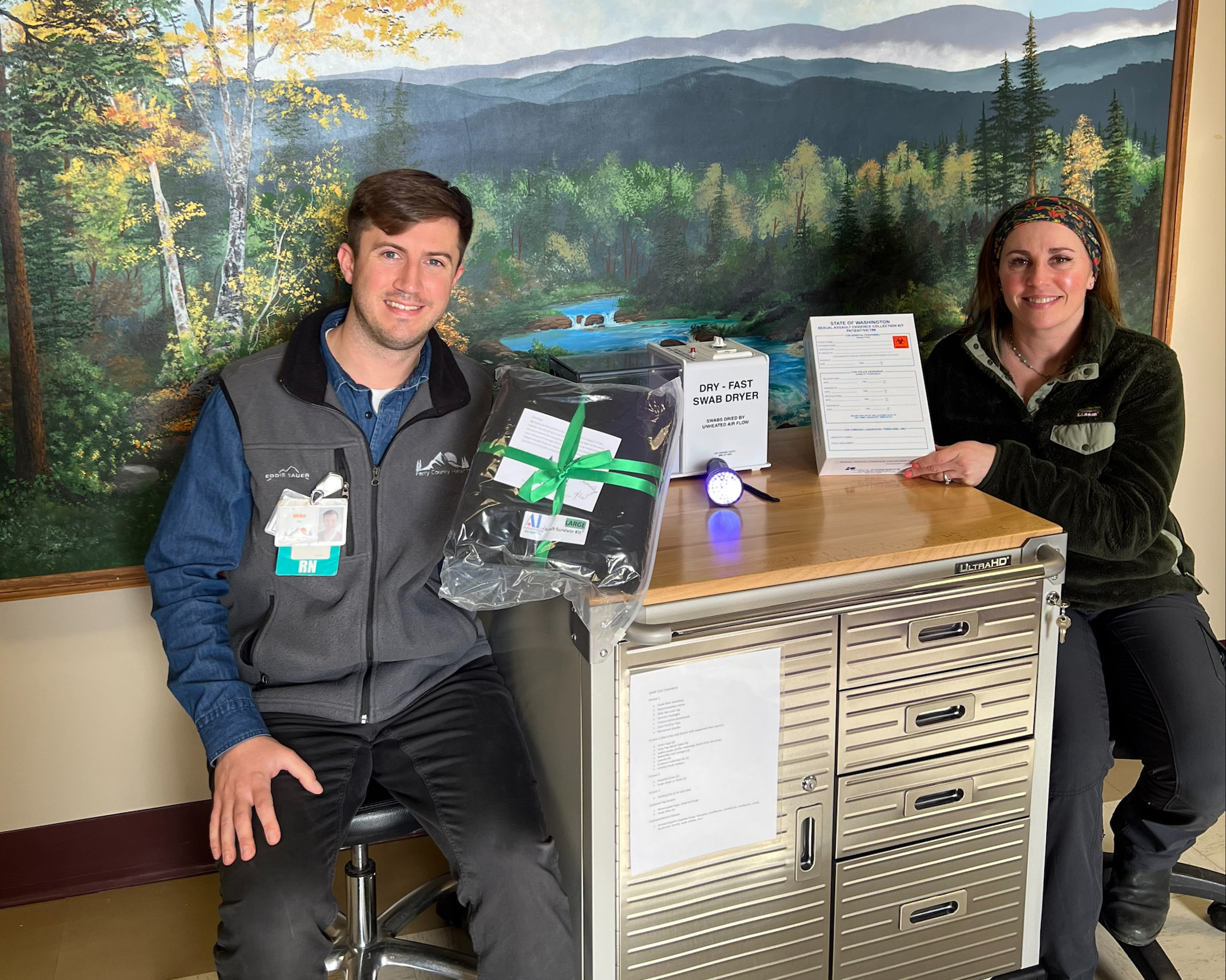 However, there are still many roadblocks for nurses who seek this training.

The instability of state and federal funding for training could impact the state’s leading sexual assault nurse examiner training site at Harborview Medical Center in Seattle.

Ongoing hospital staffing shortages — exacerbated by the COVID-19 pandemic —  mean many nurses haven’t been able to set aside time for the training.

Martinoli said two nurses at his hospital are interested in receiving the training but haven’t had time to do so because the hospital has been busy responding to COVID-19 patients.

There is proposed legislation —  both at the state and federal level — to reduce barriers to the training.

Meanwhile, the availability of nurses with this training varies greatly across the state. A dozen responses to a recent Washington State Hospital Association survey found some hospitals have no SANE-trained nurses while others have several. And even those that have multiple trained nurses said they still needed more to provide a sufficient response to sexual assault victims.

The survey speaks to the urgency of making this training more accessible, said Jacqueline Barton True, vice president of advocacy and rural health with the Washington State Hospital Association.

Barton True said she doesn’t want the hospital to be a barrier for a sexual assault victim needing health care, healing from trauma or finding justice in the legal system.

But hospitals will continue to be part of the problem if they turn away victims who show up in the emergency room.

“Once patients get the courage to come to one hospital, they don’t often go to a second,” said Wendy Williams-Gilbert, director of the  Washington State University bachelor of nursing program in Spokane. “We have a lot of assaults that don’t get processed, and perpetrators don’t get prosecuted.”

Rohr said that during a weeklong training course several years ago, she cringed when she realized how much she didn’t know when doing exams. She had done exams for about two years when she finally was able to get more extensive training.

She came away from the training with a greater passion for doing the job right. She did not like knowing that a sexual assault court case could fall apart because a nurse failed to properly collect DNA and other documentation.

“I wanted to make sure they were done appropriately, and the patients were getting the best documentation and evidence collection I could,” she said. 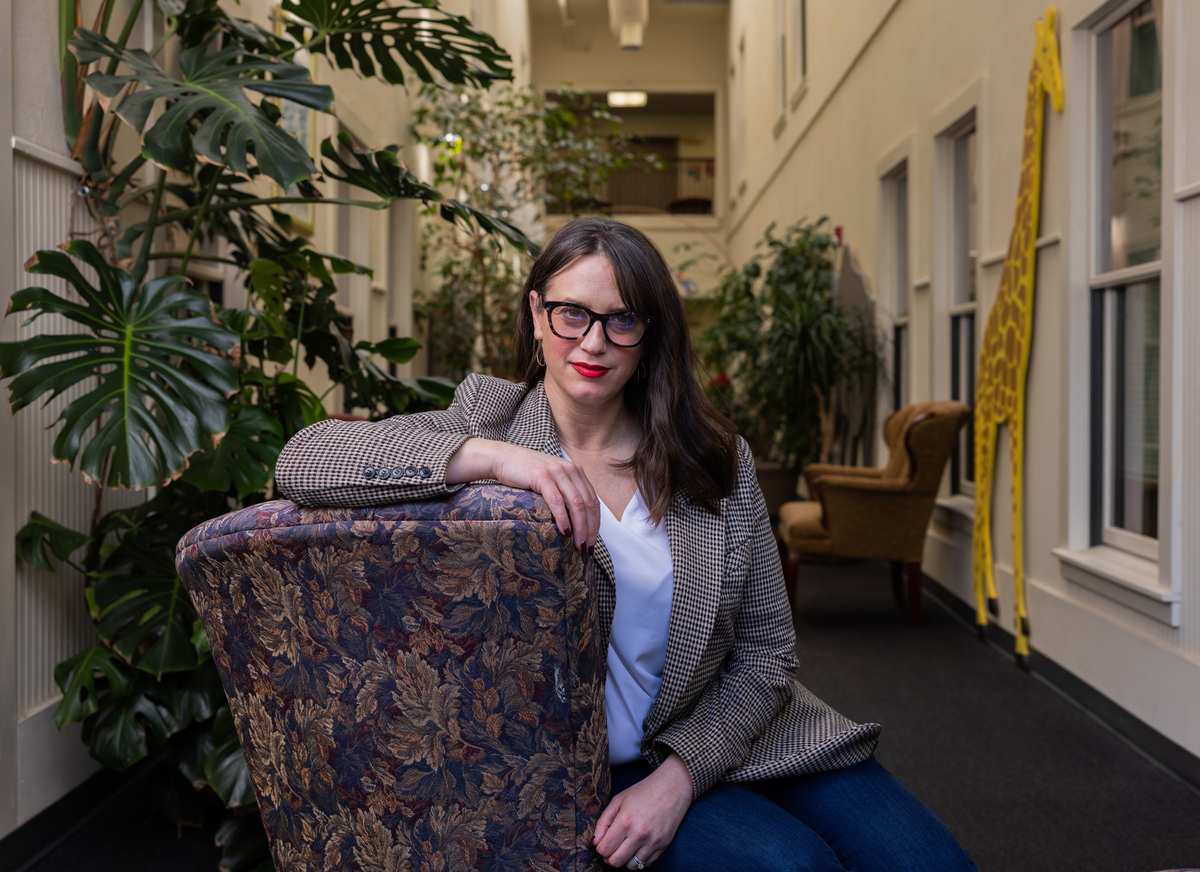 That could have long-term effects. “Fewer people end up feeling like they want to pursue a forensic medical exam or the wellness exam because they feel mistreated by the system,” Williams Hueter saId.

The Harborview Abuse and Trauma Center is the only SANE training site in Washington state. The center has provided this training for more than two decades. In the past two years, it has trained 300 nurses, said Terri Stewart, health program operations manager at Harborview.

Harborview offers the training at its facility in Seattle, and its staff also travels to hospitals in rural areas around the state. During the COVID-19 pandemic, Harborview also did some training virtually.

“The job is much more complex than a typical nursing job and requires a unique set of skills to ensure a high standard of care that meets victims' needs without retraumatizing them,” she said.  “A major goal of our training program is to ensure that no matter where patients present for care in Washington state, they receive the same type of high quality, trauma-informed care.”

The hospital now has seven SANE-trained nurses, allowing it to provide 24-hour coverage.

“It’s time-sensitive,” said Spenst, who also oversees the emergency department at sister hospital Providence St. Joseph’s Hospital in Chewelah. “We want to make sure that as those patients come in, we’re able to get that SANE exam [completed] and get help as quickly as possible.”

Sufficient coverage doesn’only mean having a nurse available to collect DNA and other documentation. It also means the nurse can give full attention to the victim.

“What we are offering these victims is the ability to start the healing process,” Spenst said. 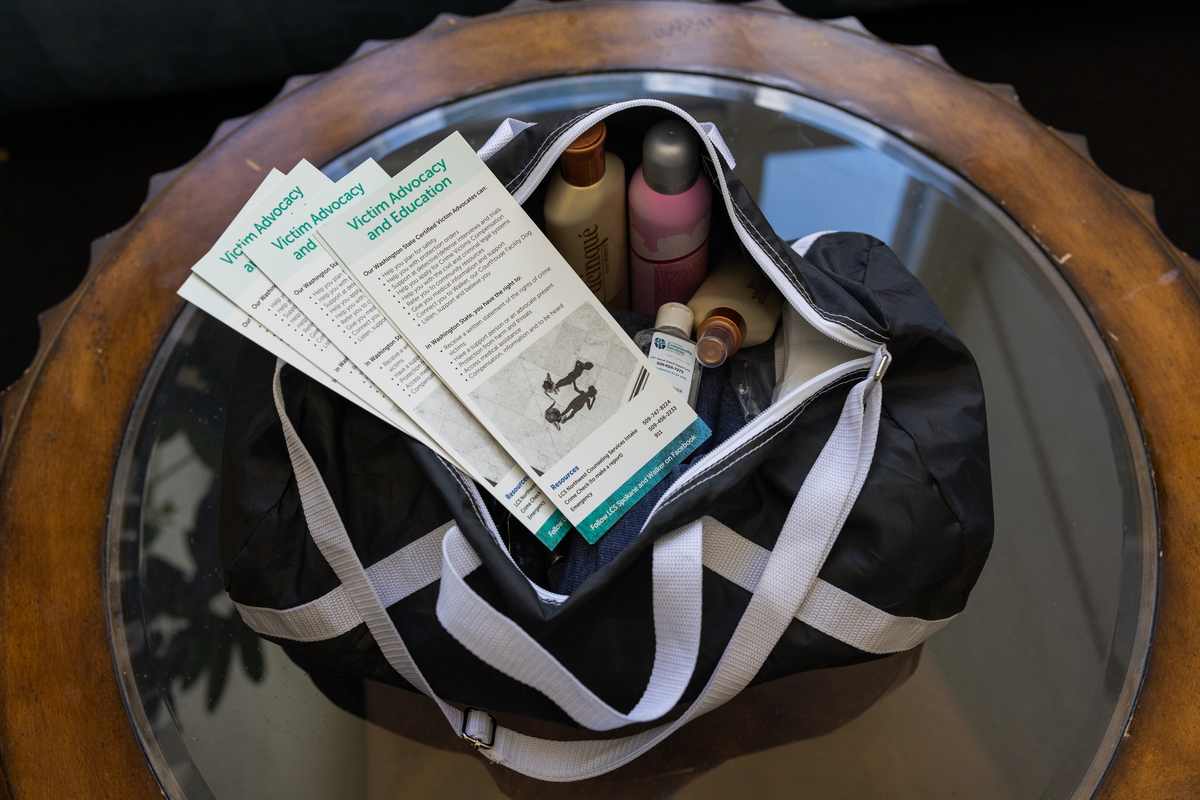 As an advocate for victims of violence and sexual assault, Lutheran Community Services Northwest offers patients bags of clothes and toiletries to ease the transition to and from the hospital. (Rajah Bose for Crosscut)

As an advocate for victims of violence and sexual assault, Lutheran Community Services Northwest offers patients bags of clothes and toiletries to ease the transition to and from the hospital. (Rajah Bose for Crosscut)

On the other side of the state, Jefferson Healthcare in Port Townsend continues building its SANE program, which it launched three years ago.

The critical access hospital started working on the program in 2017, in response to a 2016 state Department of Commerce report on the availability of sexual assault examiner-trained nurses.

Heading up the program was coordinator Katie-Rose Fischer-Price, who had worked as a SANE nurse at Harborview in Seattle. She went from being one of many trained nurses in Seattle to the most experienced in Port Townsend.

“It propelled me into this leadership position,” she said. “It was amazing and somewhat intimidating.”

The hospital currently has six trained nurses with plans to hire another. Since launching the program, the hospital has provided exams to all but two patients. Evidence collected during one exam contributed to an eventual conviction.

“When you look at the [low] percentage of [sexual assault cases] that even go to court, we were excited about that conviction,” said Molly Parker, medical director of Jefferson Healthcare. 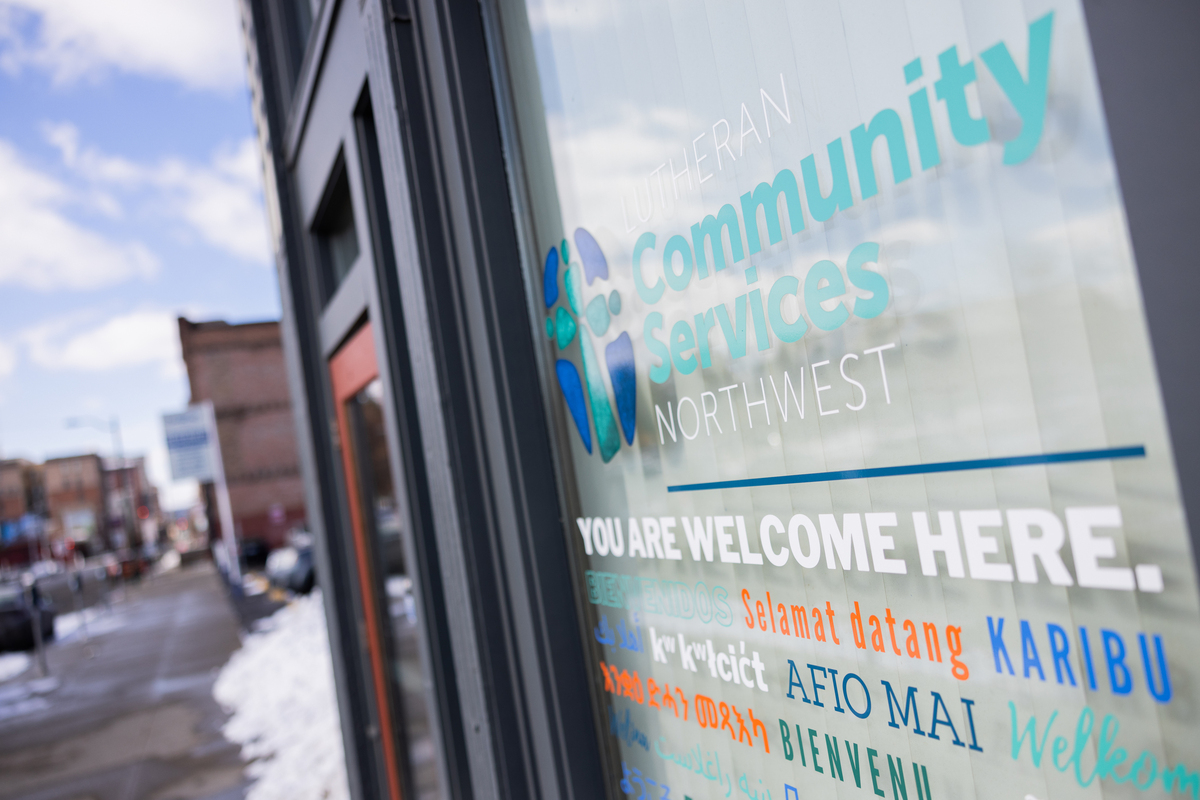 Paying for the training

However, that progress could be stifled by a lack of money to pay for it.

State funding that has enabled Harborview to offer training free of charge this year is set to run out in December. Federal funding previously available also ran out. Harborview wants to avoid having to charge for the training.

“We try not to charge for the class because in the past, when we have had to charge, feedback has been that hospitals either don’t send staff to be trained or nurses are paying out of pocket for the training,” Stewart said. “We try hard to make the trainings as accessible as possible and reduce as many barriers as we can, cost being the most prohibitive.”

A bipartisan group in Congress recently introduced the Supporting Survivors Access to Nurse Exams Act. Among the legislation’s provisions is $30 million in federal grants to pay nurse salaries and fund training programs.

U.S. Rep. Deborah Ross, a Democrat from North Carolina, said reporting by Carolina Public Press on a shortage of SANE nurses in the state was a factor in her push for these federal dollars.

Meanwhile, proposed state legislation could also provide an avenue for a training facility in Eastern Washington.

House Bill 1622 would establish a SANE training program at Washington State University’s College of Nursing in Spokane. The House passed the bill, and Rep. Gina Mosbrucker, a Republican from Goldendale and the bill’s sponsor, is working to get the bill to the Senate floor for passage before the Legislature’s Friday deadline.

Mosbrucker sponsored another bill, House Bill 1621, to provide stipends for nurses to cover out-of-pocket training costs. The bill also would establish a grant program for hospitals to cover expenses, such as replacement staffing while a nurse is training. Mosbrucker said she hopes she can get the bill’s provisions passed as part of the state’s operating budget.

“We have to get perpetrators off the streets,” she said. “We can’t keep waiting.”

Over at Providence Mount Carmel, Spenst has a long-term goal of having all the nurses in its emergency department SANE trained, whether through Harborview or a new program at Washington State University.

Ferry County Health's  Martinoli's short-term goal is to get training for the two nurses who have expressed interest. He hopes to get more of Ferry County Memorial Hospital’s nurses trained over time.

Martinoli shared another story when explaining why he wants nurses at his hospital SANE trained: One evening, a sexual assault victim came to the hospital while Martinoli was out of town. That evening, no other SANE-trained nurses was available. The victim had to travel to multiple hospitals and went as far as Spokane — more than two hours away — before finding someone who could conduct the forensic exam.

Martinoli expressed sadness at the amount of travel the victim had to do and noted that others may have given up after that failed attempt.

“Especially a victim that has to travel a mountain pass with that trauma — I feel like they’re less likely to travel that far,” he said.

And it’s a reminder of the enormous responsibility he has when he does every exam.

“You only have that one time at that moment with that patient,” he said. “You have that one chance while they’re there with you to ask the right questions.“

What is a sexual assault forensic exam?

How to prepare for a sexual assault forensic exam

Do you have to file a police report to have a sexual assault forensic exam?